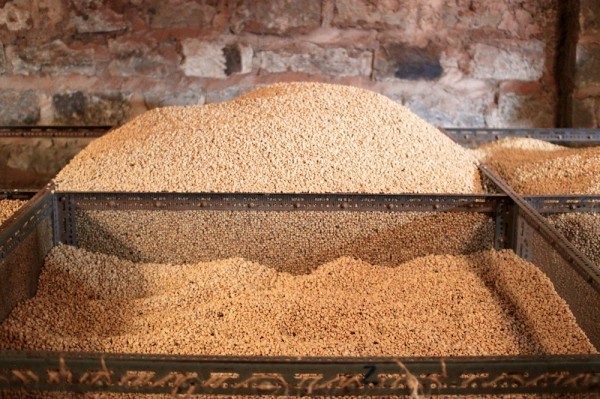 Green coffee at a Nyeri mill. 2012 Creative Commons photo by the Coffee Collective.

Local sources in Nyeri, Kenya, are reporting that a group of armed thieves has stolen approximately 120 bags of top-grade parchment coffee from a mill in the renowned growing region.

Sources from the Gititu Coffee Factory in Tetu, one of six sub-counties in Nyeri Central Province, told Kenya’s Daily Nation that a group of men wielding guns and machetes tied security officers up late Sunday night, before making away with with the coffee and other milling supplies. Daily Nation has more:

According to the factory’s assistant manager, Vincent Macharia, they lost 120 bags of parchment coffee, a computer, a complete tool box, books, a pump and factory chemicals.

The factory’s chairman said since December 2014, they had delivered 268 bags of coffee to the Kenya Co-operative Coffee Exporters (KCCE) at the Sagana depot, and they were planning to deliver the remaining 210 bags Tuesday.

The Sagana depot is the central mill that all producers in the Nyeri region had been forced to ship coffee to by county government order last year, and this is just the latest in a series of dramatic and controversial events in the region. Workers at the Gititu factory were outspoken last year against the government plan, which included buying and marketing all the coffee produced at independent mills, saying the coffees were being under-valued.

Not coincidentally, premium-grade from Nyeri has historically been highly prized by roasters throughout Europe and the United States, and trade relations in the region have been unstable for the more than a year.

More on the theft: Daily Nation