SCAA Issues Cost Breakdown for Regionals, Including $100,000+ from General Fund 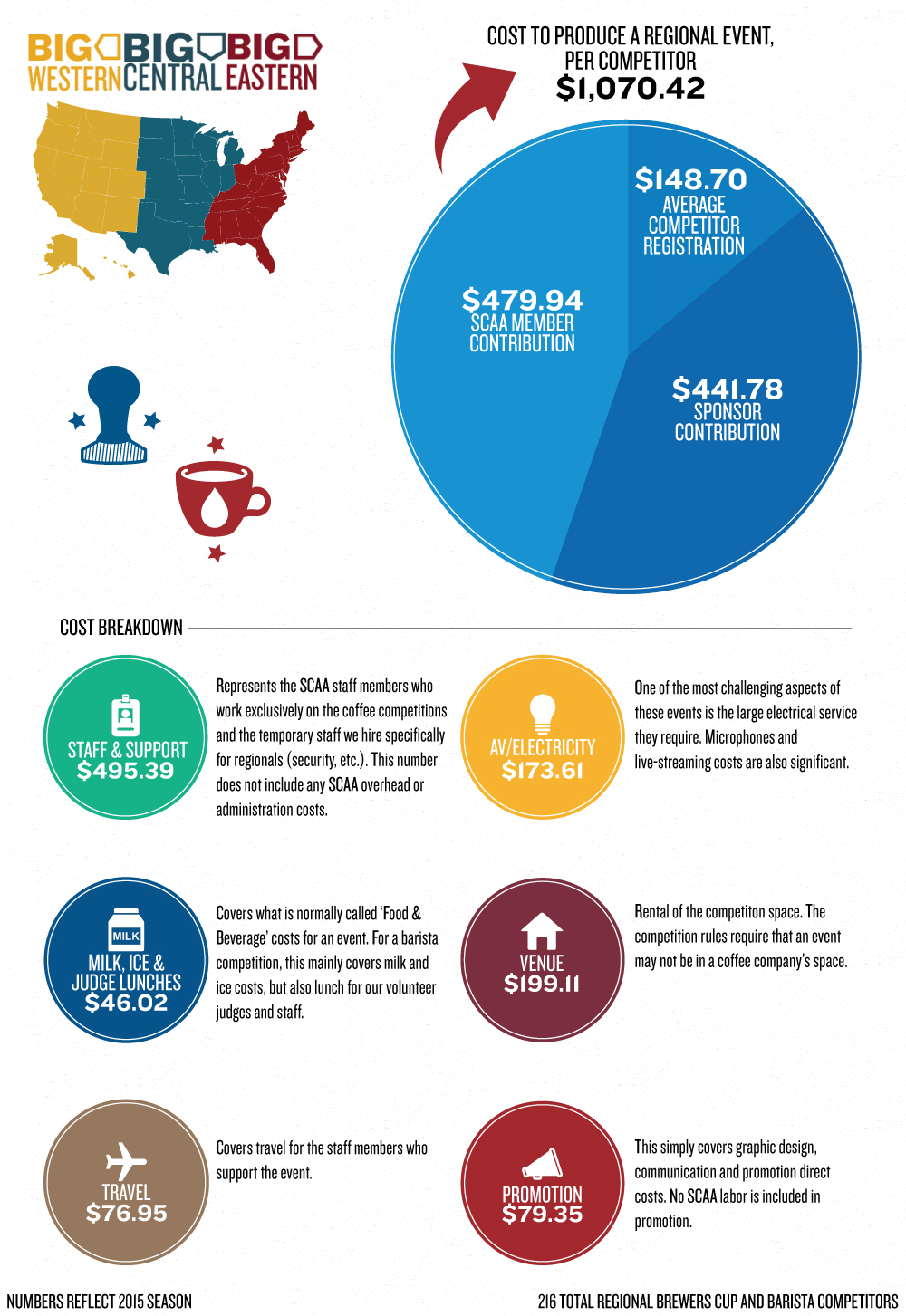 The Specialty Coffee Association of America has just released an infographic breaking down the costs associated with producing U.S. regional barista competitions. The group announced it was discontinuing the competitions beginning in 2016, citing cost as a prohibitive factor, and the move was sharply criticized by many in the professional barista community.

One of the most illuminating figures in the infographic is the per-competitor expense coming from the SCAA general fund, which is composed of membership dues. The figure worked out to approximately $104,000, about 45 percent of the total production cost for the three events in the 2015 regional cycle.

The SCAA says the infographic was the idea of Barista Guild of America executive council chair Lorenzo Perkins, who has been actively working on behalf of the BGA in an ad hoc committee to examine SCAA member feedback and explore alternatives to regional competitions since soon after the June announcement. Today’s SCAA announcement, attributed to executive director Ric Rhinehart, explained the creation of the infographic:

In the discussion around the sustainability and feasibility of the SCAA Regional Coffee Competitions, a major conversation point has been the financial realities of putting on these events. In an attempt to inform discussion, Barista Guild Executive Council chair Lorenzo Perkins had an idea — what if we broke down the costs of putting on these events on a per-competitor basis, and then created an infographic to communicate the info.

The SCAA crunched the numbers for the 2015 competition cycle, which involved 216 registered competitors for the three regional events — the Big Eastern, Big Central and Big Western. With a total cost for all three events at $231,210.72, the per-competitor breakdown was $1,070.72. Nearly half of the per-competitor expenses was attributed to staffing ($495.39), which includes staff exclusively focused on the events and those hired on a temporary basis. Says the SCAA:

The SCAA employs a small staff exclusively to manage the barista competitions, and of course this is the largest cost of doing these events. Venue rental is a big cost too. It can be challenging to find a place that can handle the electrical needs of a barista competition and accommodate an audience at the same time. Speaking of electrical, that’s another big cost.

Of course, these are just numbers from one cycle, and don’t shed any light on operational principles such as efficiency, but the SCAA presented the analysis as an effort toward increased transparency:

It’s our hope that this information leads to a clearer understanding of the finances of the regional barista competitions, and is offered in the spirit of transparency, discussion and collaboration.