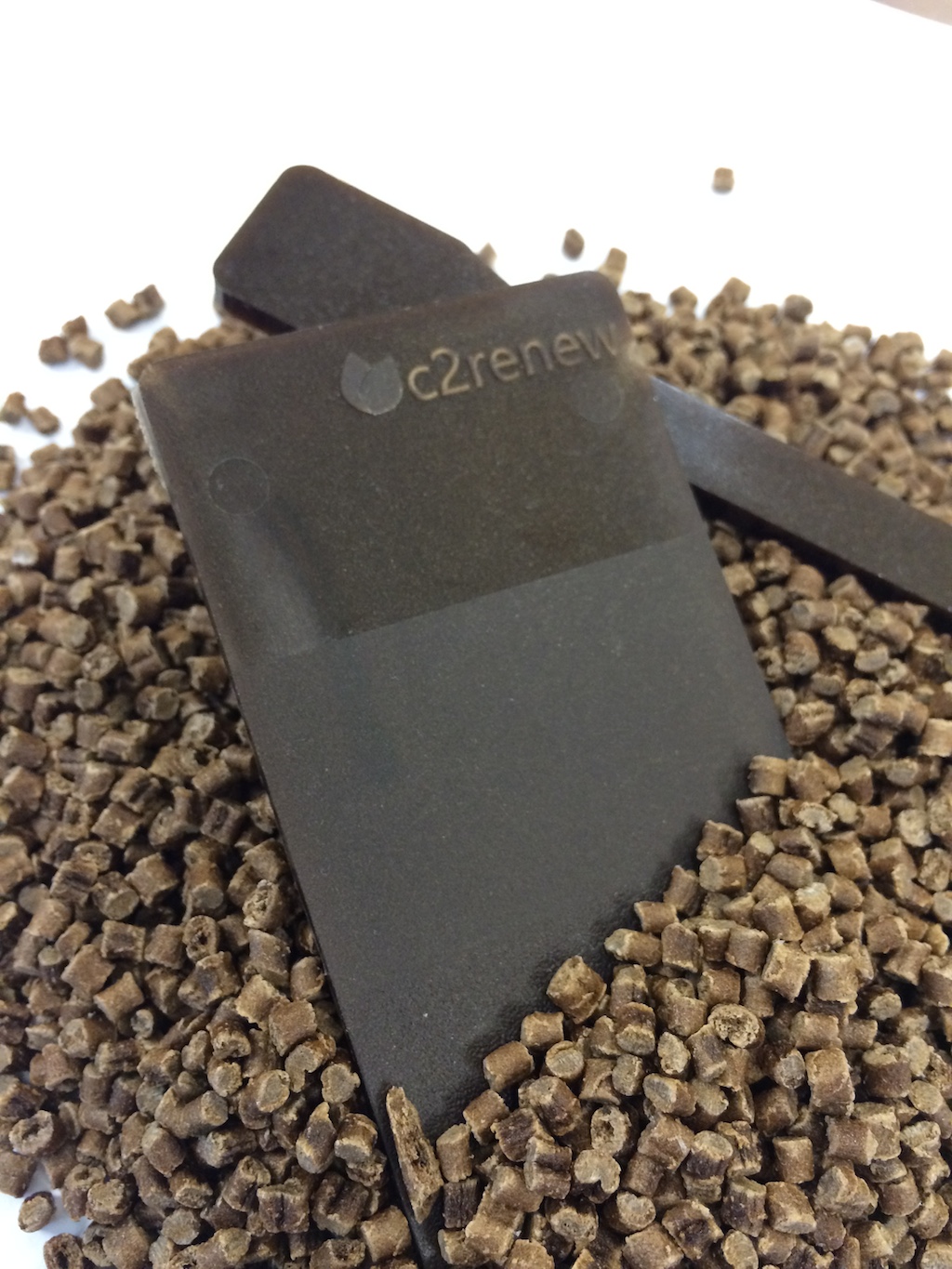 There seems to be a renaissance of coffee wastestream products lately, from spent-coffee charcoal for barbecues to coffee-based paper in to-go cup sleeves. Research continues into spent coffee’s potential as a biofuel, while other scientists have found a way to make spent coffee an effective methane storage medium, helping to capture greenhouse gasses and store them as potential fuel.

Now, a Fargo, ND-based company called C2Renew Inc. has engineered a proprietary biocomposite formulation for a coffee-based plastic. To further realize the potential of this material, the company has also recently partnered with another Fargo company, 3Dom USA, makers of filaments for 3D printers. The resulting product for sale by 3dom is a coffee-based filament for use in any 3D printer capable of printing with PLA.

3Dom offers a range of specialized 3D printing filaments geared towards eco-friendliness and sustainability. The plastic spools around which the filaments are coiled are not only reusable, but they’re made from other bio-based plastics supplied by C2Renew. The coffee-based filament, in its natural brown color and with an attractively grained appearance, can be used in a wide range of prototyping and modeling applications. Solid bio-plastic items such as filter or napkin holders, business card holders, pourover stands or the non-contact plastic parts of various brewers would be simple to make out of coffee plastic. 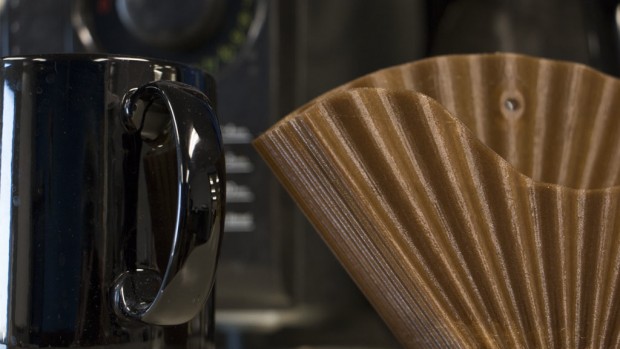 Of course there’s also the clear potential for a stainless steel-lined travel mug with an exterior made out of solid, compounded coffee — a product which C2Renew has already developed and taken to Kickstarter for funding its manufacture on a commercial scale.

C2Renew collects their spent-ground source material from a combination of small artisan roasters as well as larger coffee-product manufacturers. They haven’t been doing it for very long and do not have exact figures to report for how much waste has been diverted so far, plus not all of the waste they collect is destined for 3D printers. “We are also incorporating coffee into other products, not just with the filament and the 3dom partnership,” C2Renew CTO Chad Ulven told Daily Coffee News. “We’re using coffee in other plastics with varying concentrations.”

“It’s just a way to diversify where coffee waste goes,” Ulven said. “For sustainability, we need to think about that in everything we do. By utilizing coffee waste in a different way and repurposing it into new products, some might see that as a benefit over it being used for compost.” 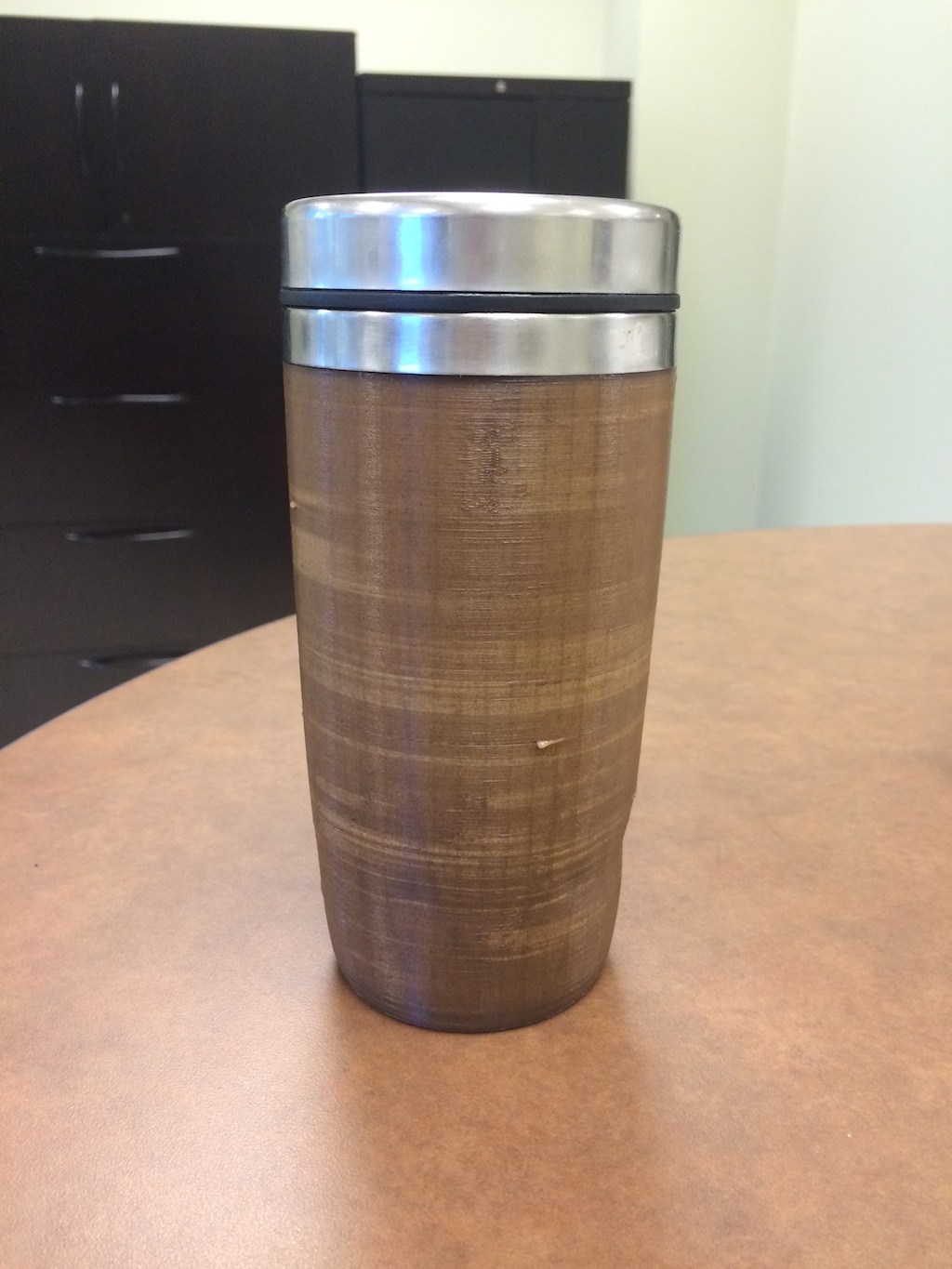 Ulven added that the coffee bound for compost is still ultimately bound for compost, as the plastics they’re producing are also compostable. “You could think of it as delaying its trip to the compost bin,” said Ulven, “but it gets repurposed for something different in between.”

“Outside of the mindset of how does this material impact the coffee that’s destined for compost, there’s also asking, how does it maybe lessen the use of the other petroleum-based filaments that are out there, how does it lessen that wastestream,” C2Renew CEO Corey Kratcha told Daily Coffee News.

Said Ulven, “Another elephant in the room that a lot of people have thrown our way is could we make a material that could be used as a K-cup replacement. I think the opportunity is there.”

Kratcha added that C2Renew has a Keurig machine in their office, and they love bandying about their ideas over hot cups of stimulating brew, although he finds that it’s difficult for people to wrap their minds around a bio-based plastic in use for something like the monumentally wasteful K-cup. “We developed the travel cup to be a technology demonstrator,” said Kratcha “so folks would see that there is applicability and functionality in this material.” 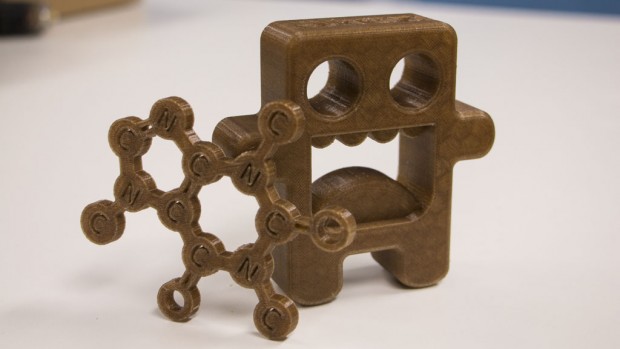 The next step for the compounding company is to seek FDA approval for the coffee-based material, in order for it to be suitable for any application involving direct contact with food, such as the K-cup replacement idea. In the meantime, while their manufacturing process and ratio of spent grounds to finished plastic remain proprietarily undisclosed, C2Renew maintains that the process, while involving many steps and sizeable machinery, is as minimally impactful as can be from an environmental standpoint.

“Everything we do as a company, we implement green technology and green processes,” Ulven said, noting that the company also diversifies the energy usage in order to diminish dependence on the electrical grid. 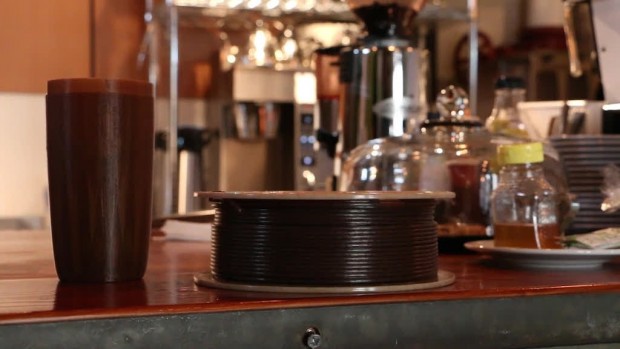 You forgot about this one. http://www.kaffeeform.com/

“Kaffeeform is an innovative recycled material made from used
coffee grounds and renewable raw materials. After five years of
experimentation and investigation, a unique formula was created
to transform old coffee into new products.”

I got one! @ Amsterdam Coffee Festival. First I did when holding it for the first time: smell the cup and saucer… COFFEE!