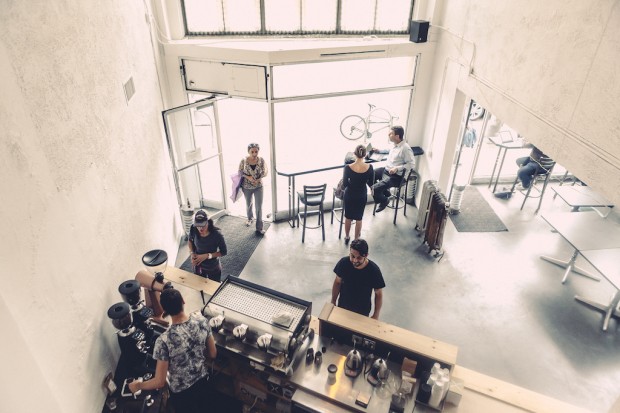 The envelope-pushing Seattle-based company Slate Coffee Roasters has just completed a major retail expansion, opening two new café locations in the Emerald City almost at once. Founded in 2013 by brother-sister team Chelsey Walker Watson and Keenan Walker with a single location in east Ballard that continues to go strong, Slate now has a Pioneer Square location that opened earlier this month, and a third location in the University District officially opened today.

“The original location was getting a bit cramped,” Keenan Walker, who’s also the director of roasting and coffee operations, told Daily Coffee News. “On busy days we have people spilling out into the street.” Walker said the compact Ballard space would frequently be overrun by coffee crawl groups, or tourist buses. “Japanese tourist buses, stuff like that,” said Walker. “We needed to grow in footprint and throughput in order to accommodate a bigger crowd.”

Both of the new locations are roughly 1,500 square feet, and both boast 3-group Slayer V3’s behind the espresso bars. The La Marzocco machine in the original space will also be swapped out for a two-group Slayer, in keeping with the others. “The Slayer allows us to pull a shorter extraction and increase viscosity while still maintaining all the unique flavor characteristics that we wanted in our espresso, and maintaining a good balance of sweetness and acidity,” said Walker, who attributes this to the variability of pre-infusion provided by the Slayer machines.

The go-to espresso grinder for all Slate cafés is the Compak E10 Master. Meanwhile customers can order a shot of any coffee Slate has in stock, and the barista will dial it in on the fly by single-dosing an EK43 batch grinder, even though an espresso ground on an EK43 will almost certainly exhibit different qualities than the same coffee ground on an espresso-focused Compak E10. “That doesn’t bother me. I’m not very American in that sense. Variety doesn’t bother me at all,” said Walker, bucking the industry norm of striving for an identical, consistent product across the board. He said Slate embraces both the diversity of flavors as well as the opportunity it presents for conversation.

“If you come to our coffee bar, you know that we try to engage people with dialogue,” said Walker. “Pretty much every dang time somebody gets a shot out of the EK, the barista’s talking to them about differences in extraction and equipment.”

This eagerness to explore new possibilities and to share in their discoveries is intrinsic to the Slate Coffee culture. It pervades to their roasting philosophy as well, which yields some of the lightest, brightest and most floral coffees in a city that remains a predominantly dark-roast market.

The University District space, which was also previously a coffee shop, more or less fell into their laps when the property owner presented it to Slate at just the right time. Yet both it and the Pioneer Square location are in neighborhoods Walker and company had been scouting with strategic intent for their demographics and for the other progressive food businesses succeeding there. “We wanted to be around other people that are doing innovative things in coffee. It helps to develop the market,” said Walker, noting that even among these, Slate’s coffee constitutes a bit of a departure. 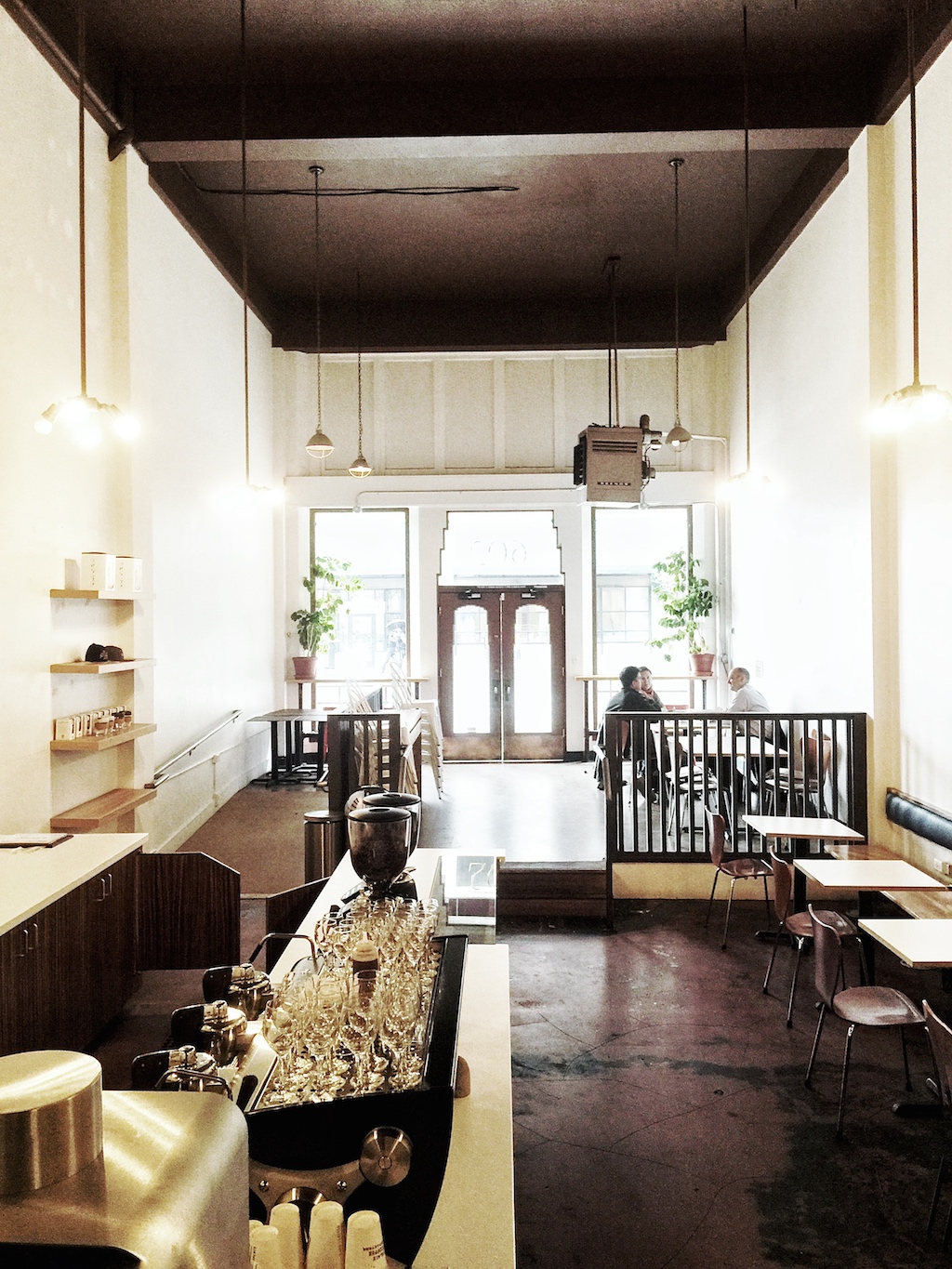 Another strategy emblematic of Slate’s adventurousness in coffee is their use of wine-oriented glass stemware to serve their espresso. Stemware is an intentional tool used by the company to intensify drinkers’ focus on the color and body of the brew, and to concentrate its aromas under the nose. “It’s completely transparent,” Walker said. “It helps the customer engage better with their coffee. Ceramics in general, due to the opacity of it and the fact that you can’t see your coffee, it muddles the engagement.”

It’s not lost on Walker how the appearance of stemware in a coffee shop may raise flags for people that are used to drinking — or serving — coffee in chunky porcelain mugs. He’s not immune to feedback, but also not swayed by accusations of it being some kind of affectation. To the detractors, Walker insists, “That’s not what we’re trying to do. We’re not trying to offend you with our stemware.”

“I’m just trying to get people back to drinking black coffee,” said Walker, while acknowledging that the black coffee to which he’s urging a return is hardly the same coffee that’s always existed. It’s only in the most recent decades of improved coffee production that growers and processors are achieving coffees of such high quality that they can be enjoyed in as light a roast as Slate tends to offer.

“We’re super casual about what we do,” said Walker. “People’s preferences are their preferences. I’m not here telling everyone they should drink super-light-roasted coffee. I know my ethos isn’t the majority of people’s philosophy on coffee, but I do think there’s a decent amount of people that really do want to explore different roast levels and different philosophies in coffee. We’re just there trying to provide something different.

“I would say we have a pretty vast demographic of people that consume our coffee. I would say what we do is maybe very progressive, but I don’t think it’s necessarily polarizing. As quality increases, every market dynamic changes.”

He added his belief that coffee has been historically roasted darker through the generations in order to cover up defects, suggesting that the attitude among consumers that darker is “what coffee tastes like” is more of a social construction than “an absolute in the culinary sense.”

All of the roasting for Slate’s three locations as well as wholesale accounts will continue to be done on the same 15-kilo capacity Giesen W15A roaster the business has always used, located in an offsite facility in Seattle’s SoDo District. Greens will continue to be sourced through a combination of direct relationships with producers as well as through importers such as Atlas Coffee Importers, Keffa Coffee and JC Coffee, although the hope is to get to a point where the majority if not all of Slate’s coffee is imported directly from the source.