Larry’s Coffee Returns to Retail With 42 & Lawrence in Raleigh 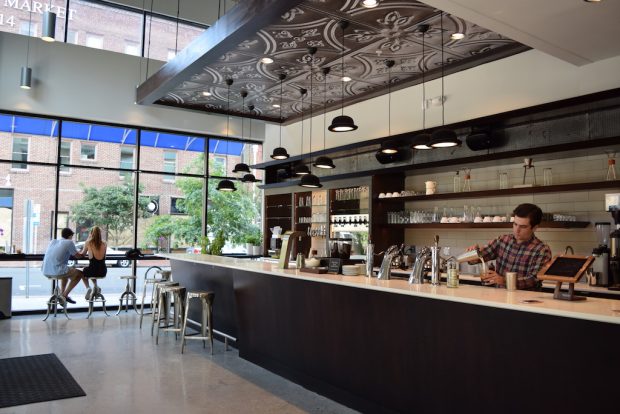 Longstanding sustainability-obsessed North Carolina-based certified B-corp roaster Larry’s Coffee hasn’t had a standalone retail location in nearly 20 years. That changed earlier this month as the paper came off the windows at 42 & Lawrence, their new café on the ground floor of the SkyHouse luxury apartment complex in downtown Raleigh, N.C..

While the dual focuses — apart from quality, of course — of the roasting business continue to be farmer equity and environmental sustainability, the new café also puts health and creativity front and center in the customer experience.

Playful bowler-hat pendant lights reminiscent of the work of Belgian surrealist painter René Magritte hang above the counter, under which a two-group Modbar espresso system frees up the space between patrons and baristas for more personal and enlightening interactions, while also being a fascinating talking point itself.

A tap system for a variety of cold-pressed juices gives customers the option to mix and match depending on what flavors or nutritional benefits they feel drawn to at the moment, and another tap system by the front windows of the café features cold brews both nitro and flat alongside kombucha, seltzer for concoctions and a draft latte.

“It’s like a Frappucino on steroids,” Larry’s Coffee founder Larry Larson told Daily Coffee News about the draft latte. “This is what a Frappuccino always wanted to be but never was.”

Larson said that he’s excited for the café, which has been in development for about four or five years, to be not only a place that showcases and collects feedback on what Larry’s already does well, but also a testing ground for totally new products and strategies. “42 and Lawrence is on some level like an incubation lab,” Larson said. “It’s a place for us to try on new things, and see how customers feel about it.” 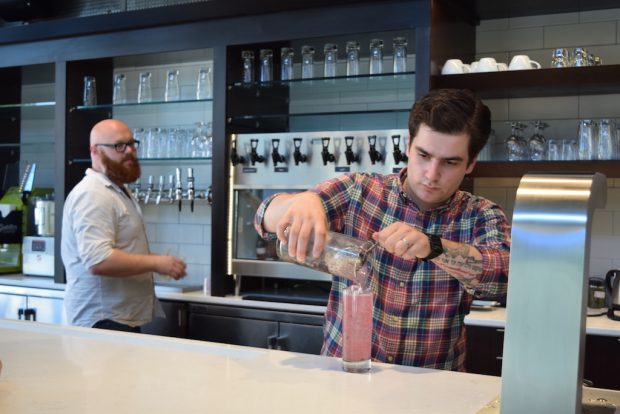 Larry’s Coffee has focused on sourcing high-quality microlots since its foundation by Larson in 1994. At that time the company also had a retail café, although Larson decided to close that shop to focus more intently on roasting in 1998, about one year after it joined forces with a handful of other small, independent roasting companies around the United States and Canada to form the all Fair Trade, organic importing group Cooperative Coffees. Ten years later the company achieved certification as a B-Corporation, and its quest to make the world better, or least not worse, through coffee, continues today.

At their three-building roastery that totals between 12,000 and 13,000 square feet, there’s a packaging and storage building, the roasting production building, and a cold brew production and bottling plant. In all three the company seeks the utmost in environmental friendliness, including zoned heating, water reclamation, onsite compost, solar systems, and a structure and floor finish that maximizes the use of daylight over electric light. The facility is the sight of Raleigh’s only biodiesel fueling station, which also keeps their own green delivery truck powered. 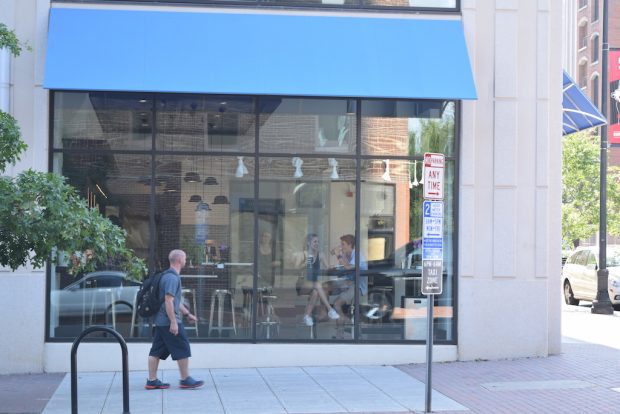 While 42 & Lawrence is but a 875-square-foot shop at the bottom of a 23-story building, the company nevertheless invested in a variety of environmentally responsible systems for their part.

“Everything we do is to show the consumer or other businesspeople that you can make conscious decisions to make adjustments,” said Larson. The café has installed energy-saving LED lights throughout, as well as a waterless urinal and dual-flush toilet in the bathroom, tankless hot water systems and a remote, exterior refrigeration system that removes noise as well as unwanted heat from inside the café.

At the center of the roastery is the company’s original Diedrich IR-12 that they still use for smallest-batch specials and R&D, while production takes place mostly on a Diedrich CR-45 that’s now about ten years old but has been upgraded to incorporate Zenith Automation software. There they roast five days a week for wholesale, retail, their own new café, and the cold brew product made next door.

“When you’re doing that extraction, you’re getting certain things and you’re not getting certain things. It was a long process to bring it to market,” Larry’s head roaster Brad Brandhorst told Daily Coffee News of their cold-brew-specific blend. Larry’s offers the blend in whole-bean form as a summer seasonal product, while the bottled RTD and concentrate beverages launched roughly five years ago. 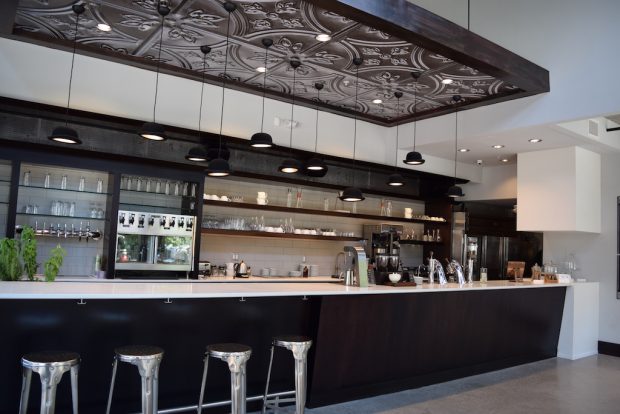 Prompted by their bottle manufacturer’s recent discontinuation of a twist-cap product, the company started exploring a canning option for their straight black RTD coffee, which is currently rolling out now as a nitro-infused coffee product.

“All of the feedback that I’ve received so far is very much thumbs up,” said Brandhorst. “For me the proof is just that when you pour it into a glass, it looks awesome, it tastes awesome, it’s got a great mouthfeel.”

This is the nitro that will put on a show for customers through 42 & Lawrence’s tap station, while the nearby hot brew bar focuses on transparency and craft. Batch-brewed “quick cups” come by way of a Curtis brewer, while “slow cups” are made by hand using Bairro AltoAir brewers. “This unique pourover method gave us more control over the flow rate when brewing and eliminated the common issue of the brew stalling, and over extracting,” said Larry’s head of product development Jeremy Behne.

“We call the pourover ‘slow coffee’ on our menu and encourage our customers to watch and ask questions as we prepare their cup,” Behne added. “It has always been our goal to be able to invite the customer into the experience, and learn a little about coffee while they wait.”

After about a week of soft-opening mode, 42 and Lawrence launched full steam ahead on Wednesday, July 6, at 134 E Martin St in Raleigh, just west of Moore Square park. A grand opening celebration event is being planned for sometime in the coming weeks, and Larson said that he hopes this café is but the first of many.