‘Coffee Spanish for Coffee Buyers’ Now Hot Off the Press 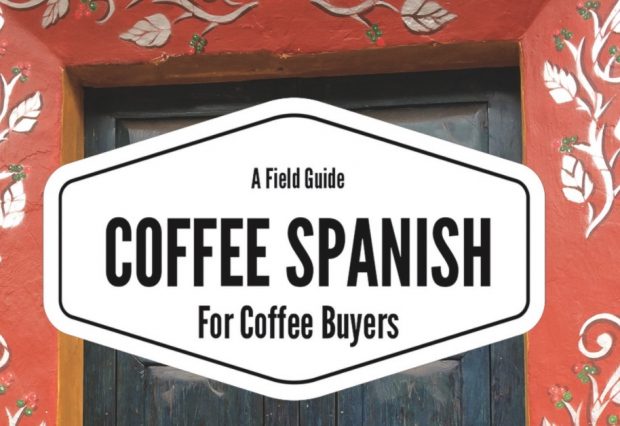 “Coffee Spanish for Coffee Buyers,” the first-of-its-kind field guide for, as you might guess, coffee buyers working in Spanish-speaking countries, is currently being printed. Softcover copies are expected for delivery as early as this week, e-books are currently available, and hardcover copies are soon to follow.

Authors Andy Newbom (IPCoffees Specialty) and Andrew Russo (Russo Roasts Coffee), two travel-obsessed coffee professionals with a range of combined experience working in Mexico and the Central and South Americas, have been working on the book for the good part of a year, turning to coffee professionals in 13 key coffee countries to help deliver references that are as regionally targeted as possible.

For each country, the guide provides a detailed list of coffee-related terms and translations, but just as important, it offers guides on etiquette, business practices and social decorum. A large part of the field guide is devoted to helping current or potential green buyers in understanding the most current and common practices and language related to milling and processing.

To navigate such a vast landscape of language and cultural differences in a little more than 100 pages is a challenging task, although Andy and Andrew have repeatedly explained to Daily Coffee News that the guide is not intended to be comprehensive in nature; it is merely a tool to help English-speakers begin to forge more natural, efficient and mutually beneficial relationships with their Spanish-speaking counterparts in coffee. (Incidentally, Andrew Russo just released the second edition of his book, “Coffee Taster’s Compendium.”) 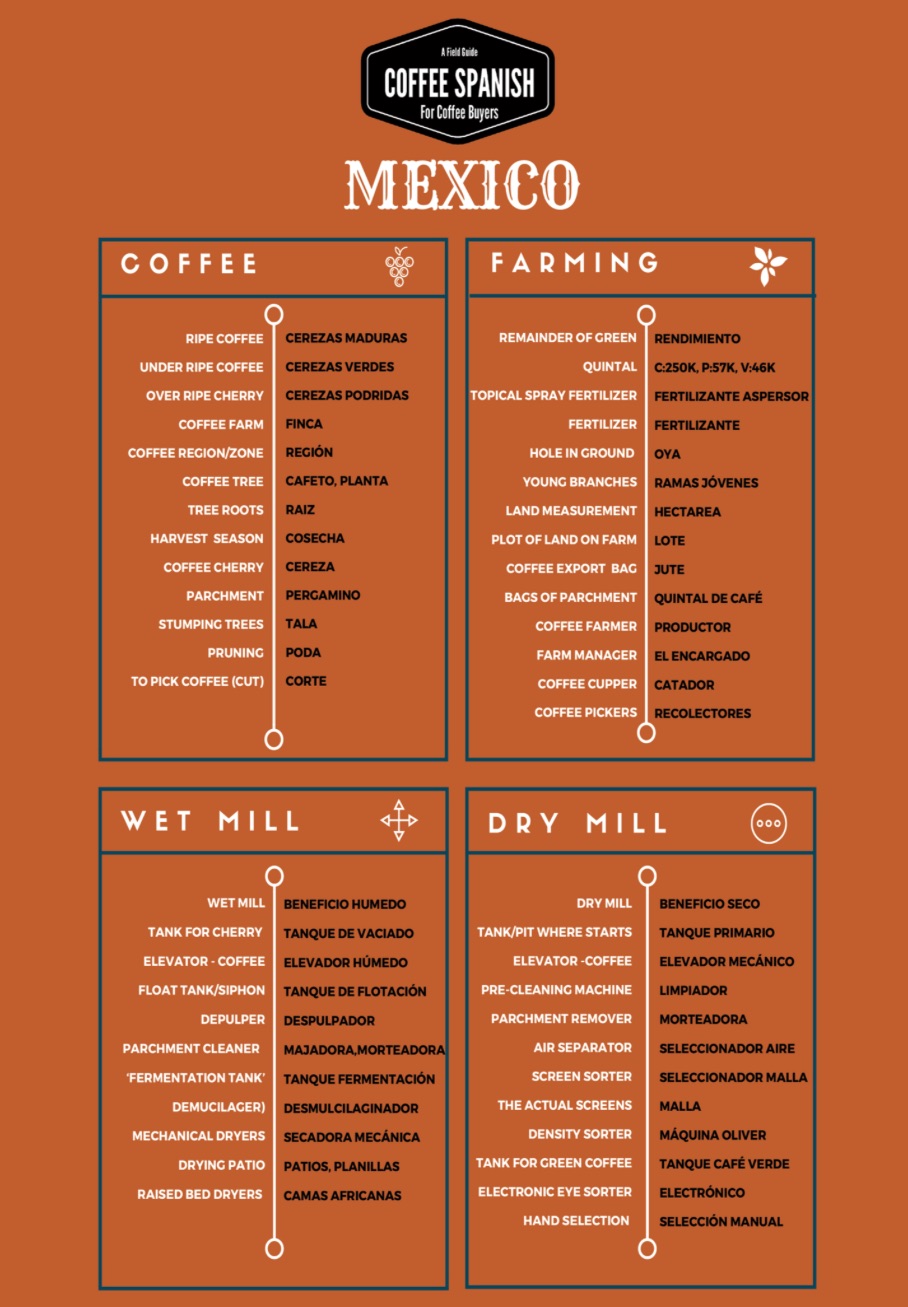 A reference guide for each country represented includes translations for key terms in coffee at various states of production, farming and milling

Following a successful Kickstarter campaign in which more than 200 backers contributed more than $10,000 to fund the production of “Coffee Spanish,” we reached out to Andy and Andrew for more on the book project, and how it might provide value to their peers in the industry.

How do the two of you connect in coffee and when did you decide to team up for this book?

AR: I had met Andy through the various trade shows in coffee but the first time we connected was at the SCAA [Event] in 2014. I was instructing a class, and there was Andy acting as the official reviewing authority. Knowing his skills and background, I have to admit I was both stoked to get his feedback when the class ended, and also nervous beyond compare. Afterwards he swung by the roastery I was working at, we chatted it up and talked about Mexico, coffee, and buying Mexican coffee.

AN: From that meeting we kind of hit it off and stayed connected. When he launched his Cuppers Compendium book 1.0, I was excited and ordered the pre-order version. I really dug his research and detail. When I decided to write this book I reached out to him and we agreed to be partners on the book. We needed a lot of research and detail and verification for this to be useful. Andrew is freaking awesome — couldn’t have asked for a better partner!

How did the book project originate?

AN: The overall inspiration for the book was of course my 14 years in coffee. And it was directly influenced by my decade spent sourcing coffee directly with farmers in several different countries.

But the final spark for the idea came on a trip in 2015 to Peru. My wife and I were invited by the Peru government to go on a trade mission to explore the specialty coffee industry there. While there, my first time personally visiting coffee origin in South America, I was struck by the amazing differences in Spanish words for all the coffee equipment, processes and ideas.

Hundreds of years of local dialects, cultural shifts, processing improvements, and differing economic conditions had created a confusing patchwork of lingo. No one had attempted to tackle it — because they were smart.

AR: Andy called me around Thanksgiving after I returned from Nepal. He started off with, “I have an idea for a book and want to collaborate.” Having written a book previously and plenty of lengthy works for school and the Army — field manuals, no fun — I knew what he was in for and said, “Let’s do it!” His passion for the project and superior sales skills got me on board, excited, and kicked me into high gear almost immediately.

To your knowledge, does this kind of resource exist elsewhere, say in other international trade sectors? In other words, are their other resources that inspired you to tailor something similar to coffee in Spanish-speaking regions?

AN: To my knowledge I have never seen anything like this in other industries, nor in coffee. There are a veritable plethora of excellent coffee books covering nearly every subject. Most have a much more comprehensive scope. My idea was to simply document the reality of working in coffee rather than the idea of working in coffee — to put in one place all the words, phrases and lessons I had learned over the last 14 years.

This is not designed to be an all things coffee book, it is designed to be a focused field guide to improve relationships and communication in order to make the entire supply chain more mutually beneficial and to make it easier to change the world for the better. Yes, we are unrepentant idealists; that’s why the publishing company is called ‘Coffee Hippy Publications’.

In short, who is this book for?

AN: It should prove highly useful for anyone who is in coffee and wants to learn more about the origin side and learn the language, lingo, slang and phrases we all use and confuse whether you buy coffee or not. It is focused on improving relationships between coffee professionals on both sides of the buyer/seller connection. Whether you ever step foot in a coffee field, this guide should prove highly beneficial.

It’s geared towards green coffee buyers, roasters, importers and coffee professionals who want to communicate more clearly with green coffee sellers in order to more effectively convey their desires and requirements for relationships, processes and quality coffee and in order to get the coffee they want to their roastery.

Spanish-speaking coffee sellers and producers could benefit as well since each country has a dedicated Coffee Spanish to Coffee English word widget that provides simple and clear translations of coffee technical terms and slang… with a country-by-country breakdown of key terms in Spanish and English.

From conception to the final product, were there directions the book took that you did not originally foresee?

AN: It started as a purely coffee-Spanish-focused idea. The more we wrote the more we realized that we had to clarify, explain, detail, diagram and walk through all the underlying ideas about processing, farming, milling, exporting, quality grading etc. The book is at least twice as long as I thought it would be.

In particular the sections about processing, wet milling, dry milling and grading became much more prominent, as even experienced coffee buyers said that they weren’t always clear on these terms and processes.

AR: Initially we thought this project would take two months. We both have a ton of experience in this field and made the classic mistake of thinking we could just knock it out. As we progressed, we started pinging new ideas off of each other. “What if we include travel tips? What if we get in-country experts to provide some tips? Should we make awesome word widgets?” It kept growing and growing and we could have spent many more months on this thing and turned it into an epic poem to rival the Iliad, but we had to keep it as a Field Guide, something to take down to origin, get dirty, and share with others to build relationships.

How has the response been thus far? And from whom?

AN: The response has eclipsed our wildest dreams! Roasters like Phil Beattie and Rob Hoos praised the work. Importers like Bruno Tavarres and Mark Inman were enthusiastic supporters. We had over two dozen people contribute to the work, fact check, and keep our Spanish spot on.

Most importantly, the public responded with a backed kickstarter campaign in less than five days. When we announced our stretch goal would be to donate books to the Women in Coffee Alliance we hit 10,000 by the end. We knew the response was going to be good, but we never expected it to take off like that.

In what ways did you address regional or country-specific language differences in dialect and in culture?

AN: This was of course the hardest and trickiest part. We worked hard to find coffee professionals in each country that were fluent in English and Spanish and most importantly intimately understood the coffee industry and processes in their country. This enabled us to get a much more nuanced view and Coffee Spanish word widgets for each country.

However,We also realized that based on traveling and working in many of these countries that there was no way to make a one widget to rule them all for even each country. The differences in words and phrases within the same country were startling. We decided that it was already crazy enough to try to document the coffee spanish for 12 different countries let alone document the differences in 5-10 regions within each country.

All languages are heavily influenced by culture, practice, influence and technical terminology. Coffee Spanish is an amalgamation of Spanish, English, German, French, and tech speak all peppered with slang and contextual word appropriation. It’s a crazy thing. That’s why we love it.

I realize you leaned on a lot of advisors in this book, but does much of it reflect your own professional experience in the coffeelands?

AR: It is primarily based on our experience working in coffee and traveling to origin. I am a natural questioner, categorizer and systems thinker. Andrew is a lifelong learner who can’t stop picking up new skills and knowledge. So we both wanted to do this for ourselves and for the coffee community. In other words, we’re both a little knowledge crazy.

Excellent coffee news and guide It will be really helpful