The City of Boston is seeking a coffee vendor to occupy a permanent kiosk being built into the renovated lobby of the Boston City Hall.

We’ve seen similar attempts toward the integration of coffee and state only sporadically over the years, including a Happy Cup Coffee Roasting kiosk at the Portland (Ore.) City Hall, and more recently, a market-testing popup series at the Chapel Hill (N.C.) Public Library. The City of Boston, too, has previous experience with coffee, hosting a popup bar area above the “Stairs of Fabulousness” on the Hall’s third floor mezzanine.

“Boston City Hall oftentimes serves as a person’s first face-to-face interaction with their local government, and it’s important that everyone who visits our building has an enjoyable and productive experience,” Boston Mayor Marty Walsh said in an RFP announcement yesterday. “This is a small step to activate the people’s public space and will undoubtedly have a big impact that will enhance constituent interactions with their government.” 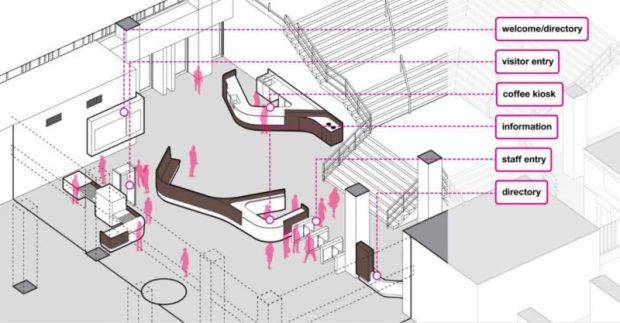 The Boston RFP is open to any coffee vendor, while the city is encouraging local, minority and women-owned businesses to apply. The mayor’s office said the pilot installation of coffee carts over the past 18 months has proven to be successful both for patrons and for the businesses involved, creating “an opportunity for small, local businesses and provided a new destination for an activated public space in the lobby.”

The Boston City Hall — from the exterior, a somewhat imposing and uninviting example of Brutalist architecture — is currently undergoing interior renovations, and the lobby and coffee kiosk are expected to be competed this spring.

“Brutalist architecture”… I love it!!! Made me laugh, SO descriptive.