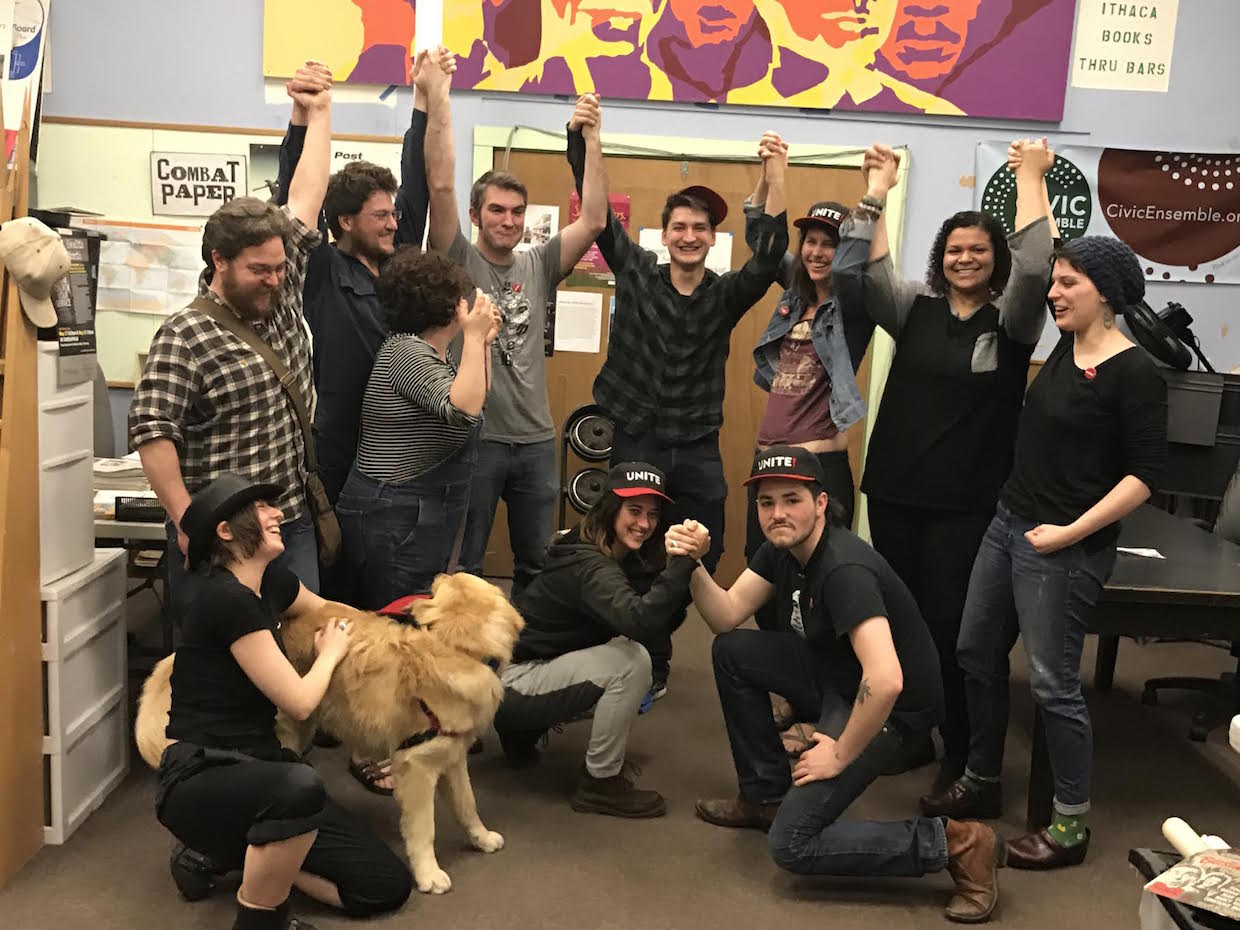 Gimme! Coffee workers at an organizing event two weeks ago.

Workers at four Upstate New York locations of progressive coffee company Gimme! Coffee held a vote this week on whether or not to officially form a labor union. The vote came back 16-1 in favor, and so the Gimme! Coffee baristas are now officially members of Workers United Local 2833.

Leaders of the movement towards organization of baristas at the cafes told Daily Coffee News that the movement from the beginning was not a reactive one; the priorities for items to be negotiated in a union contract have yet to be determined. Rather, it is a proactive step for the mutual benefit of workers and management at Gimme! Coffee’s four upstate New York cafes, and also in solidarity with their peers at other hospitality businesses in the region and the larger working class in general.

“A lot of this has to do with the history of unions in this country. The economy has changed dramatically since unions were born,” barista and organizing committee member Korbin Richards told Daily Coffee News. “The emphasis when unions started was organizing people who work in factories and in manufacturing, but as that industry declined and the service industry rose, unions didn’t necessarily follow that trend. So we’re trying to revitalize passion and concern for the working class, which is now the majority in food service.” 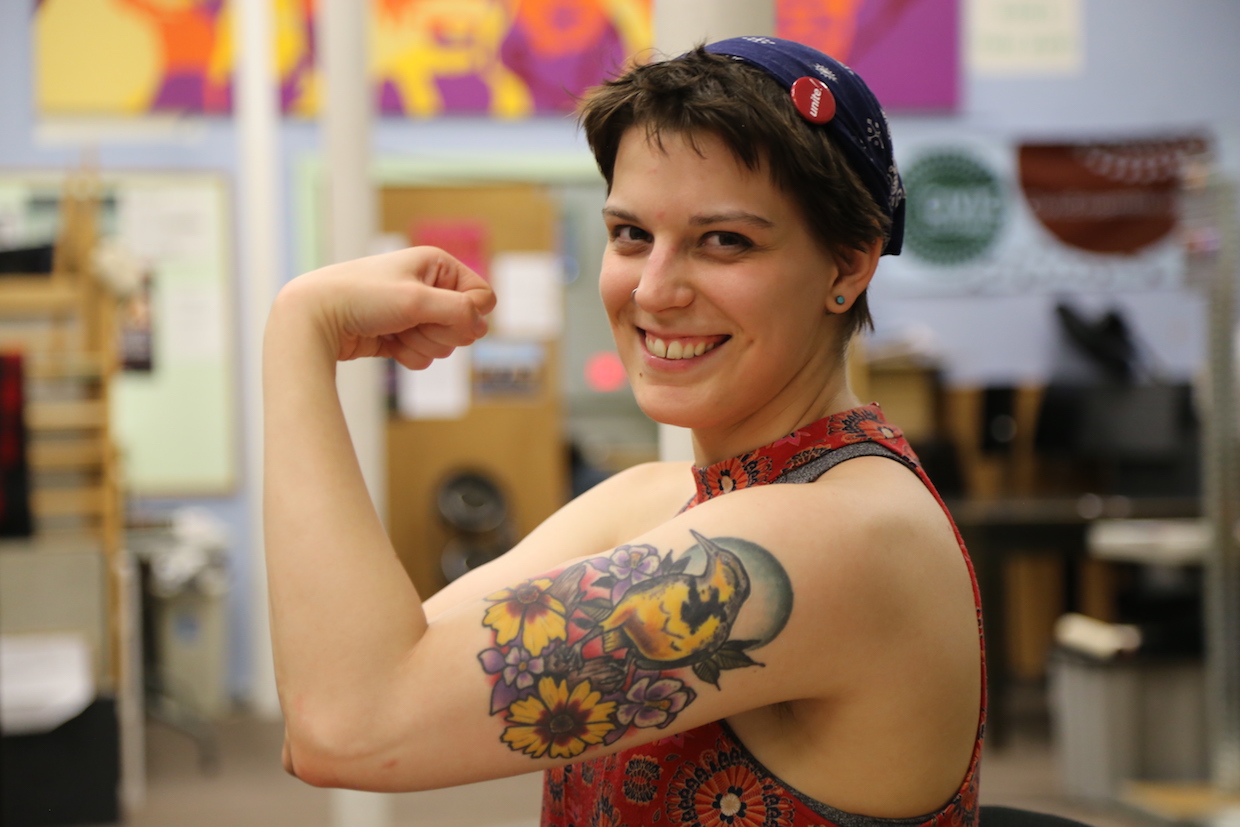 Though the inspiration for the movement originated with the workers and not with company founder and CEO Kevin Cuddeback, it is nevertheless very much in keeping with the spirit of the company founded in Ithaca in 2000. Gimme! Coffee’s signature espresso is called the Leftist Blend, after all. Another blend, called Rally, donates one dollar from each purchase to local nonprofits.

When the company won the Roast Magazine Macro Roaster of the Year award in 2012, it did so in part for its commitments to the local community, to fellow businesses, and of course to the personal and professional growth and education of its own staff.

Said Richards, “The public image of Gimme! Coffee as a company is very progressive. We’re trying to transfer that back to [Cuddeback’s] own company, and apply it to his workers as well; really embracing the progressive ideology in every way.”

Leaders of the staff organizing movement presented the idea to Cuddeback about two months ago, prior to taking any steps to rally a larger group behind the cause.

“Putting our trust in him from the beginning was the right step, and being completely transparent. I didn’t even start handing out union cards until he knew about this whole idea,” Barista Samantha Mason told Daily Coffee News. Mason, who served as the acting chair of the organizing committee, said that Cuddeback took a lot of time to reflect and consider the development.

“He’s realizing that he could be the first, or one of the few coffee shops that has a barista union, and he’s actually really excited about the bigger movement in this community in terms of helping the hospitality industry,” added Richards. “I’m really glad he’s worked with us the way he has.”

Cuddeback pledged to remain publicly neutral throughout the process, including in this week’s vote, so as not to influence anyone’s decision, given that not every worker’s mind was made up. Lead barista Eric Perreault, for example, told Daily Coffee News that he was resistant to the idea at first, not in the general sense but out of concern over what seemed to him like a hasty approach.

“I was one of the more opposed people here in the beginning,” said Perreault. “I have some pretty high skepticism filters about new ideas like this, and I really don’t want to see anything rushed… A lot of times, especially with grass-roots stuff, there’s so much enthusiasm but there’s so little structure, the bases don’t all get covered in the beginning.”

The organizing committee received guidance and support from the Tompkins County Workers Center, which is facilitating their formal alignment with Workers United Local 2833. After attending a recent staff meeting that went over more of the details, Perreault said prior to the vote that he believed most everyone involved was feeling good about the way things developed, and that it looked likely that the vote would turn out in favor of unionization.

“Our company is situated in a really progressive area. Kevin Cuddeback, the owner, was supportive of Bernie Sanders last year in the campaign. So for us to do this, it doesn’t seem like there’s much built-in resistance,” said Perreault, adding that because Ithaca is such a progressive area in general, a unionized workforce would probably further endear the already-beloved company to the local community and draw in more patronage from union supporters. “We’re not trying to hurt the ownership of the company in any way by doing this. What we’re finding out through a lot of our discussions is that it could, and probably will be a really big boost to Gimme!, because the customer base here in Ithaca is so supportive.”

In an email to Daily Coffee News, Cuddeback stated that even if the vote came back “no,” the staff and management would pursue an alternate plan for collecting input and continuing a dialogue related to conditions and policies at Gimme! Coffee. He also acknowledged that a “yes” vote on the other hand could be a winning proposition all around. Wrote Cuddeback, “I feel as though I have reason to be optimistic.” 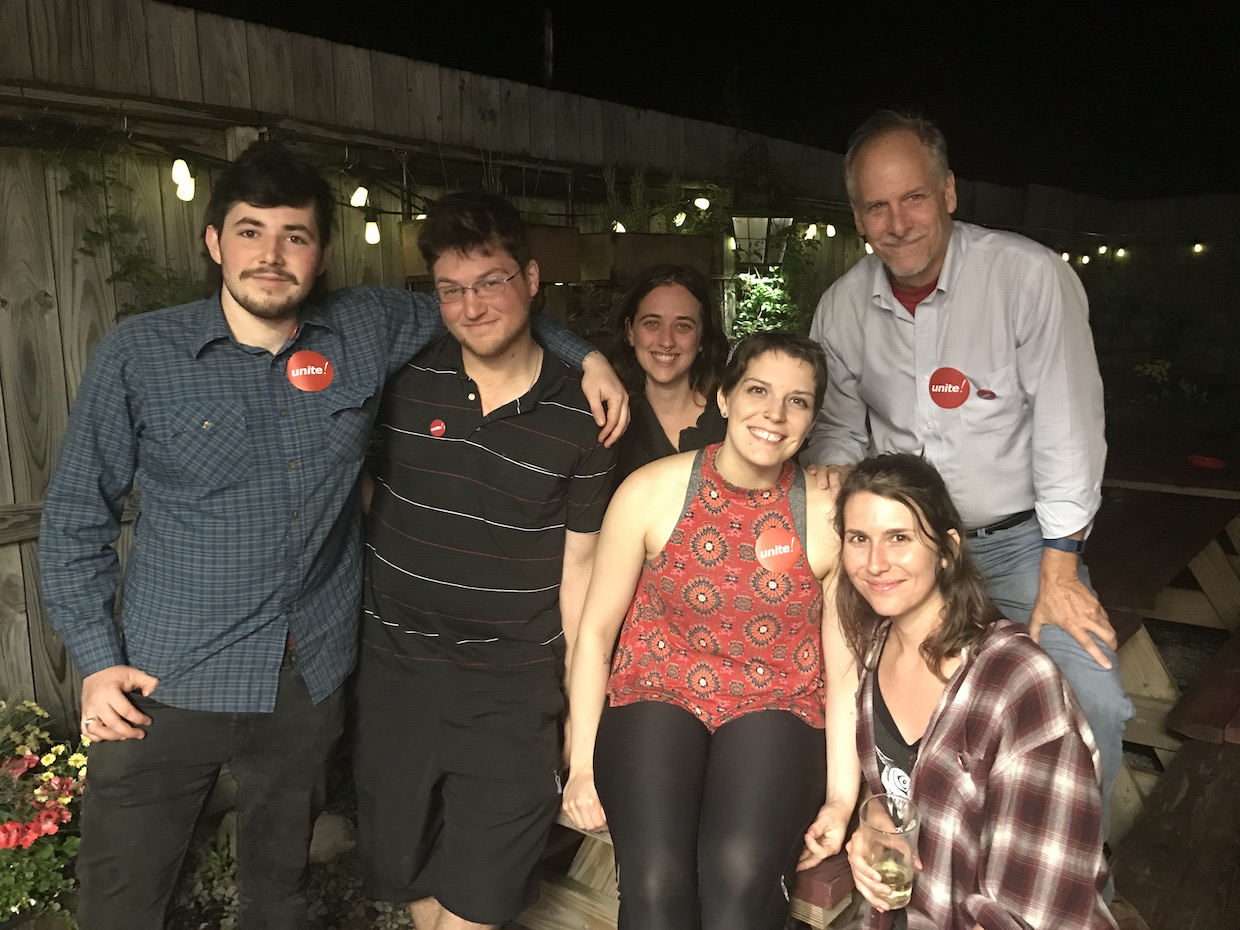 In the wake of the “yes” vote, organizing committee members went out to celebrate with Richard Bensinger, the organizer for Workers United on the ground in Ithaca that worked closely with the committee throughout the organization process and will continue to work them going forward. Bensinger, formerly the national organizing director of the AFL-CIO and founder of the Organizing Institute, told Daily Coffee News, “The key here was listening to the workers — millennials who have incredible insights into how to build a new labor movement. They are as inspirational a group of workers as I have ever worked with.”

In a follow-up email after the vote, Cuddeback added, “I expect it will be a challenging learning experience for baristas and management, but I feel the upside potential warrants our enduring that discomfort.”