The Fascinating History and Renewal of Brazil’s Yellow Bourbon 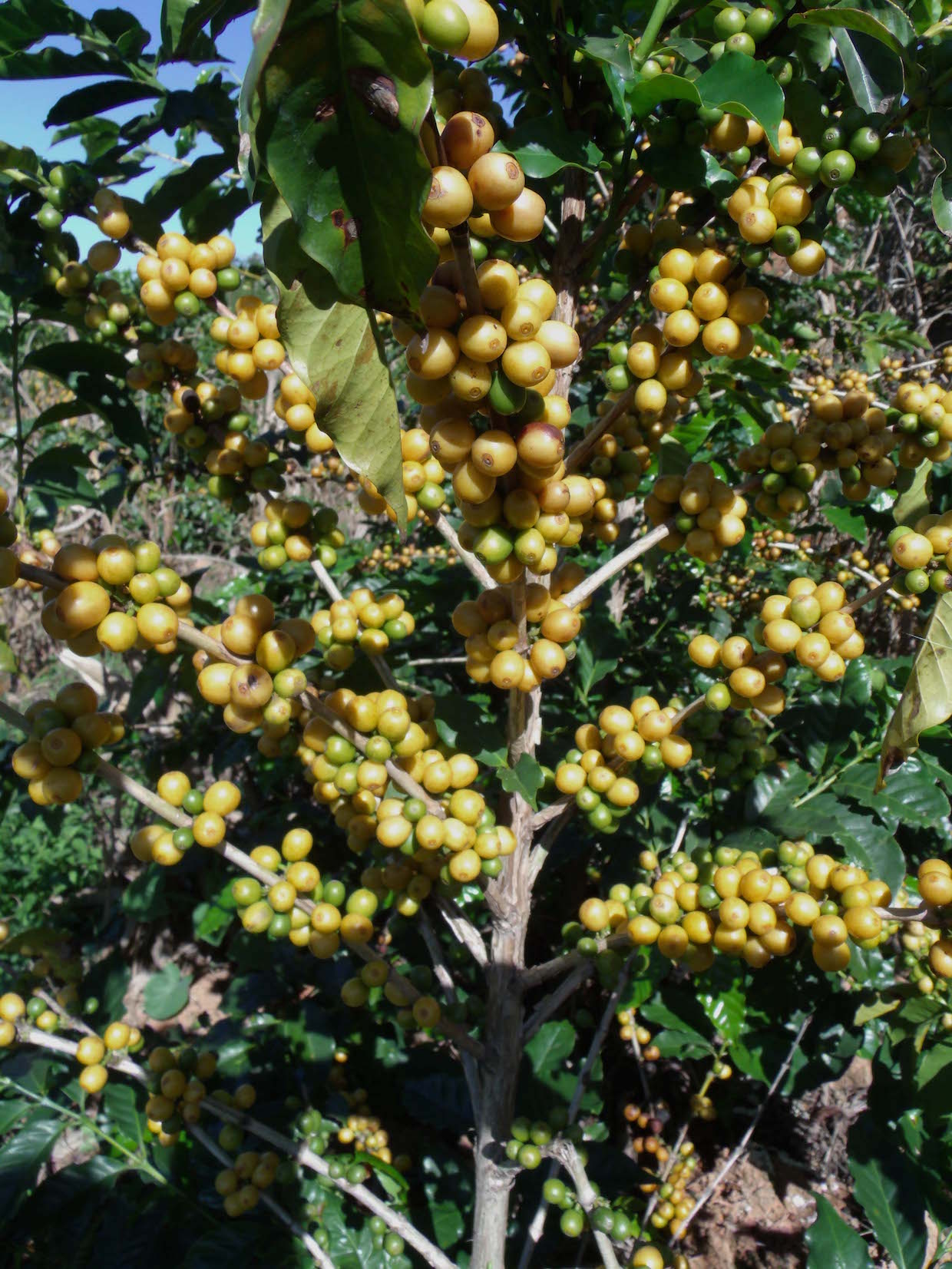 Yellow Bourbon in the field. All photos courtesy of Jonas Ferraresso.

Known for its yellow fruit in the mature stage — a distinct departure from the cherry reds of every other coffee variety — the Yellow Bourbon has become something of a coffee jewel in Brazil.

While the variety has experienced major recognition from coffee buyers and roasters in recent years — in part for its distinct, high-quality flavor attributes, and also due to a collective obsession with distinct varieties for the sake of differentiation — Yellow Bourbon actually has a long, winding history of cultivation and market exposure in Brazil.

The Origin of Brazilian Yellow Bourbon

As a coffee variety, Yellow Bourbon has been cultivated in the fields for nearly 90 years. But let’s start from the beginning, with its parents.

By the 1850s, Brazil had become a major global coffee producer country. The sector was heavily reliant on the Typica variety, which was introduced in the 1720s. Given Typica’s limited yields — and subsequently reduced export volume potential — a Brazilian emissary traveled to Reunion Island in the Indian Ocean, east of Madagascar, to secure some seeds of the infamous Red Bourbon variety. By the 1870s, Red Bourbon had become a prominent coffee variety throughout many of the Brazilian coffeelands.

Then, in 1871, something strange appeared. In the city of Botucatu in the State of São Paulo: a mutation of Typica bore yellow berries, something never before seen in Brazil, according to numerous records. While the yellow Typica mutation, referred to then as Yellow Botucatu, wasn’t particularly productive, it was adopted by a number of farmers for the curious color of its fruit. It should be noted that some researchers believe that Yellow Bourbon originated as a natural Red Bourbon mutation. 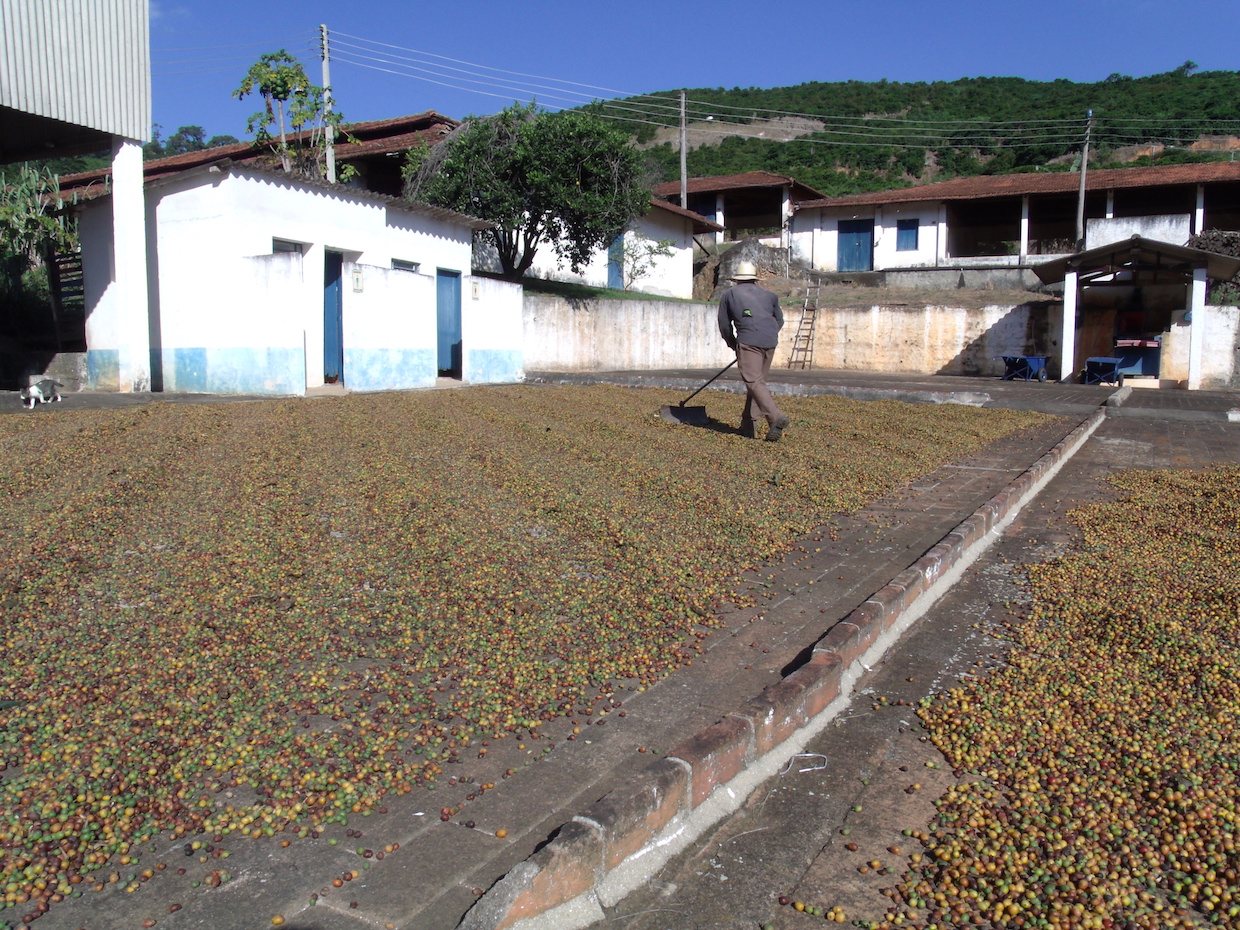 The first Yellow Bourbon as we know it today is believed to have first appeared in 1930, on a Red Bourbon farm near the city of Pederneiras (SP) — believed by many to be the result of natural breeding between Red Bourbon and Yellow Botucatu. The plant closely resembled Red Bourbon, save for the yellow color of its berries, and proved to be just as productive or more.

The appearance attracted the attention of researchers from the Agronomic Institute of Campinas (IAC), including Carlos Arnaldo Krug, who carried out the first formal studies of Yellow Bourbon in 1942. Within the following three years, 30 lineages of the variety were planted and studied by IAC in a research field in Jaú (SP).

Throughout the 1950s, the most promising varieties of Yellow Bourbon were given the code “IAC J” and were made available to farmers. In 1951, Professor J.E.T. Mendes from the same institute studied yields for the varieties grown in that time: Typica, Yellow Botucatu, Sumatra, Red Bourbon, Yellow Bourbon and Maragogipe, with Yellow Bourbon proving to be the most productive.

Despite these promising results, Yellow Bourbon never assumed a dominant share of the Brazilian sector over the subsequent decades. While still cultivated commercially, its adoption was not widespread. Because of its distinct yellow, the plant has often been treated as a kind of novelty. 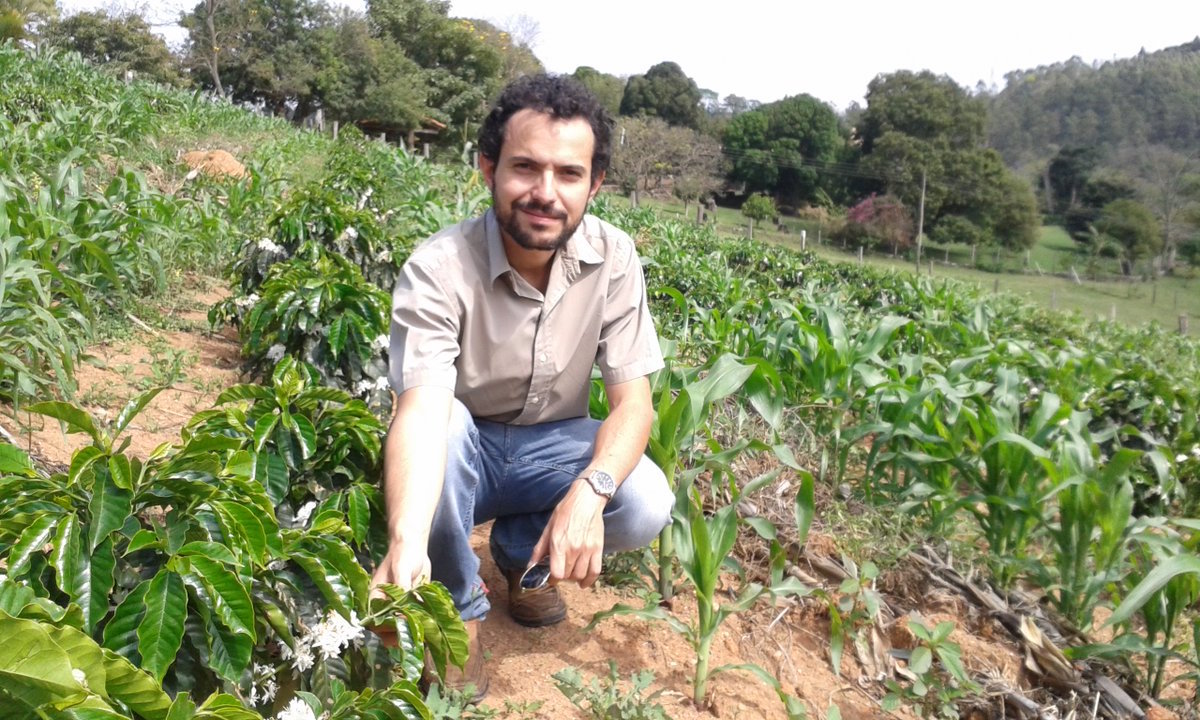 In the past — in the times of Professors Krug, Mendes and their peers — coffee quality was not a central component of plant research. The focus was typically on productivity, plant health and vigor in pest- and disease-resistance. Around the same time that Yellow Bourbon emerged in Brazil, so too did popular varieties such as Caturra (1937), Mundo Novo (1943), and Catuaí (1949).

Yet with the specialty coffee and third wave movements, Yellow Bourbon has experienced a fascinating renewal.

But First, Why Yellow?

Professor Krug in 1942 had already discovered the genetic origin of this coloring. It is a gene pairing named “Xanthocarpa,” from the Greek xanthus (yellow), and carpus (fruit).

A Yellow Bourbon tree can reach 2.8 meters in height, and has early ripeness. Of the 30 varieties studied in 1945, seven are planted commercially today in Brazil.

Because of its low-medium yields and relative susceptibility to coffee leaf rust, Yellow Bourbon’s cultivation may require more attention and care than other varieties. Yellow Bourbon usually expresses its quality potential when grown 1,000 meters or more above sea level, and in places where the harvesting and post-harvesting processes are well-executed. 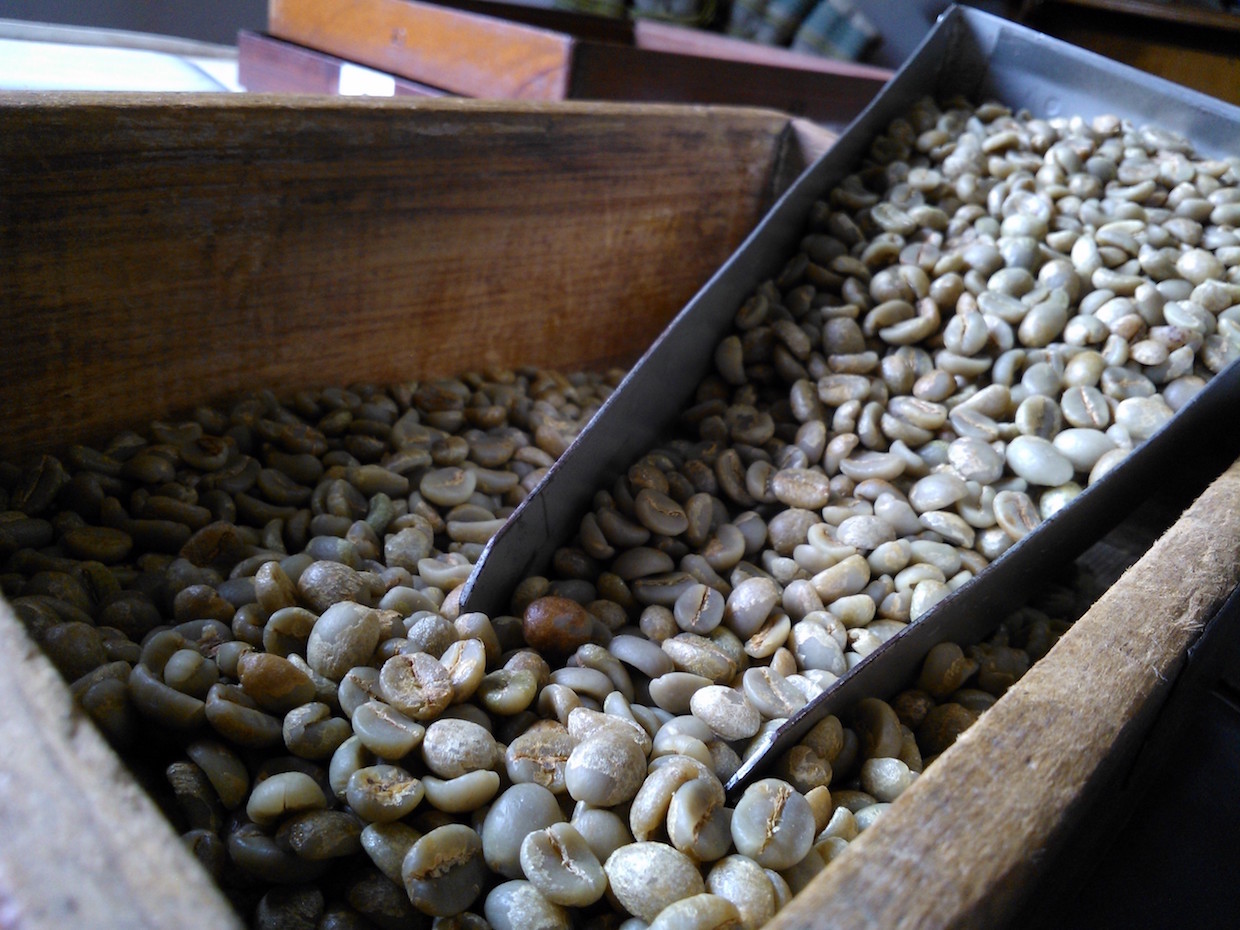 The sensory characteristics of Yellow Bourbon are clearly noticeable in the cup — including its sweet flavor, striking aroma and very pronounced citric acidity flavor. Ripe fruits and raisins are other common flavor notes. Researchers recently found some relationships between sucrose content and the presence of some fatty and organic acids with the quality of Yellow Bourbon. Yet to this point, there is no established link between luteolin (the yellow-maker) and quality.

A new spotlight in Yellow Bourbon

In 2005, the IAC renewed efforts to study the variety, but with the attention turned squarely to the cup. The 30 trees researched in 1945 were collected again, and 16 plants with scores above 85 were selected to track down the ideal lineage. Studies led by Professor Gerson Giomo are still being conducted by the IAC, as the group seeks the most robust plants with high productivity and excellent cup potential.

In 2017, in a Cup of Excellence competition, a Brazilian Yellow Bourbon reached 92.33 score in the Pulped Naturals category. The bags were sold for and incredible $126.00 USD per pound at auction, 100 times the C price at the time. 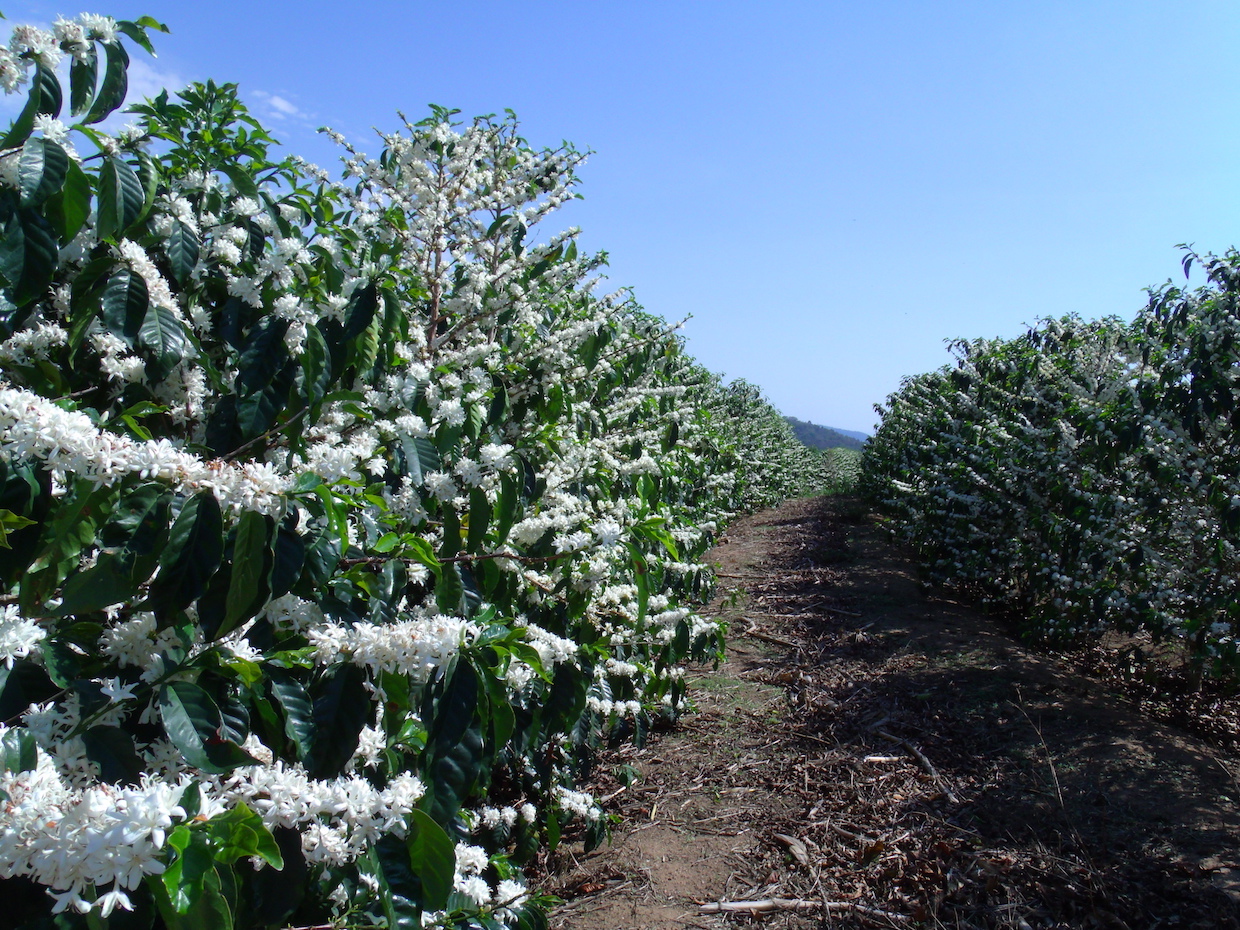 Yellow Bourbon in the field. All photos courtesy of Jonas Ferraresso.

Fascinating article, this. I’ve had a number of Yellow Borbón coffees, many from Brasil, and also some from both Guatemala and El Salvador. The flavour profile descriptors in this piece are on the mark. The best ones I’ve had thus far have been grown at rather high altitude, some near 1800 masl. The tiny very dense and hard beans, when roasted carefully, release amazing flavours. I never pass byan opportunity to taste, or sample, a yellow borbón.