Automated Pourover System Brewvie 2 Coming to the US 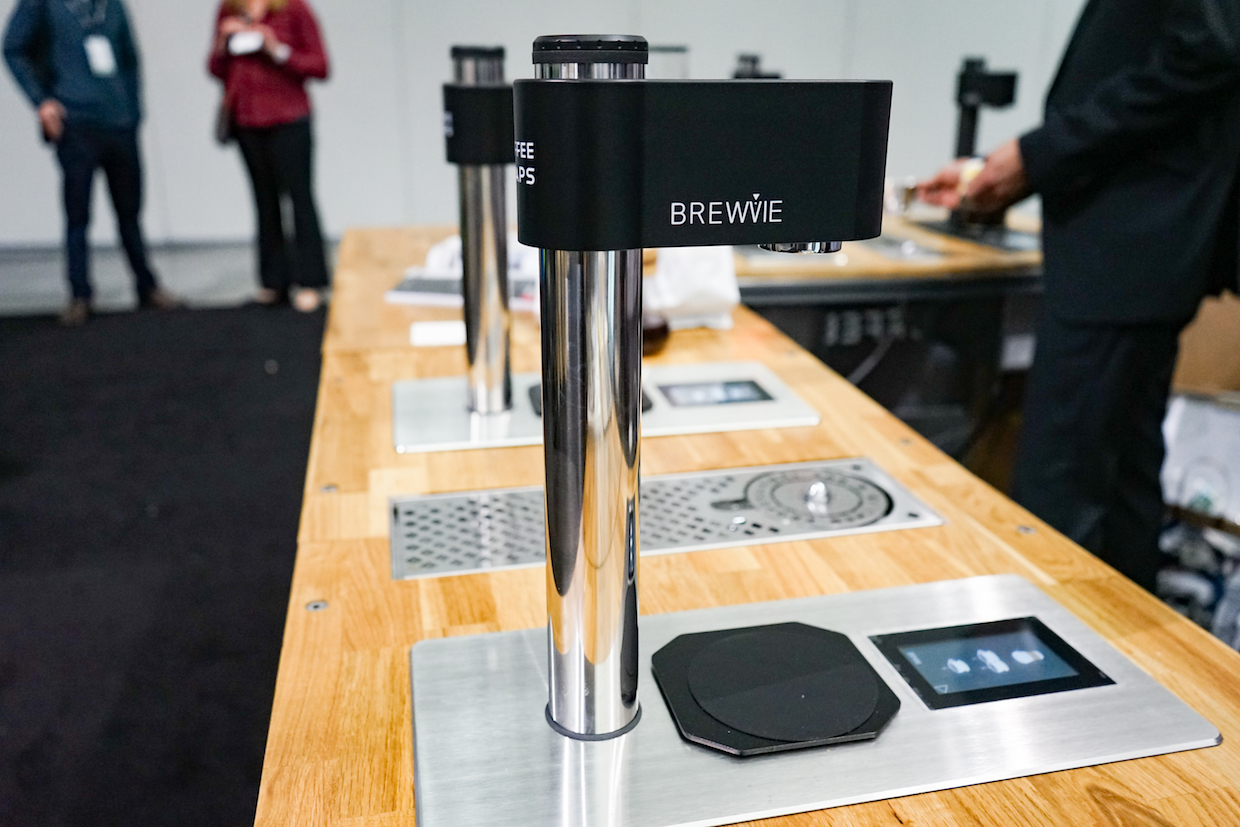 The Brewvie 2 coffee maker on display at the SCA Expo in Boston. Daily Coffee News photo by Howard Bryman.

A new counter-mounted water delivery system for automated pourover brewing in cafes called the Brewvie 2 is making its way to the United States market this year from South Korea.

It is the latest in what constitutes the first line of products issued under the brand Coffee Chaps, which is the coffee-focused arm of BSEC Electronics, a Korean company that specializes in the design and manufacture of touchscreen equipment and interface technology.

The Brewvie 2 is a compact, modern-looking, water dispenser that connects to a 1-liter boiler mounted directly beneath the unit, under the counter. Users can choose between two interchangeable shower heads that offer different numbers and orientations of holes, and the height of the water dispenser is also adjustable. Water is heated twice before it leaves the showerhead — once in the under-counter boiler, and again at the group. 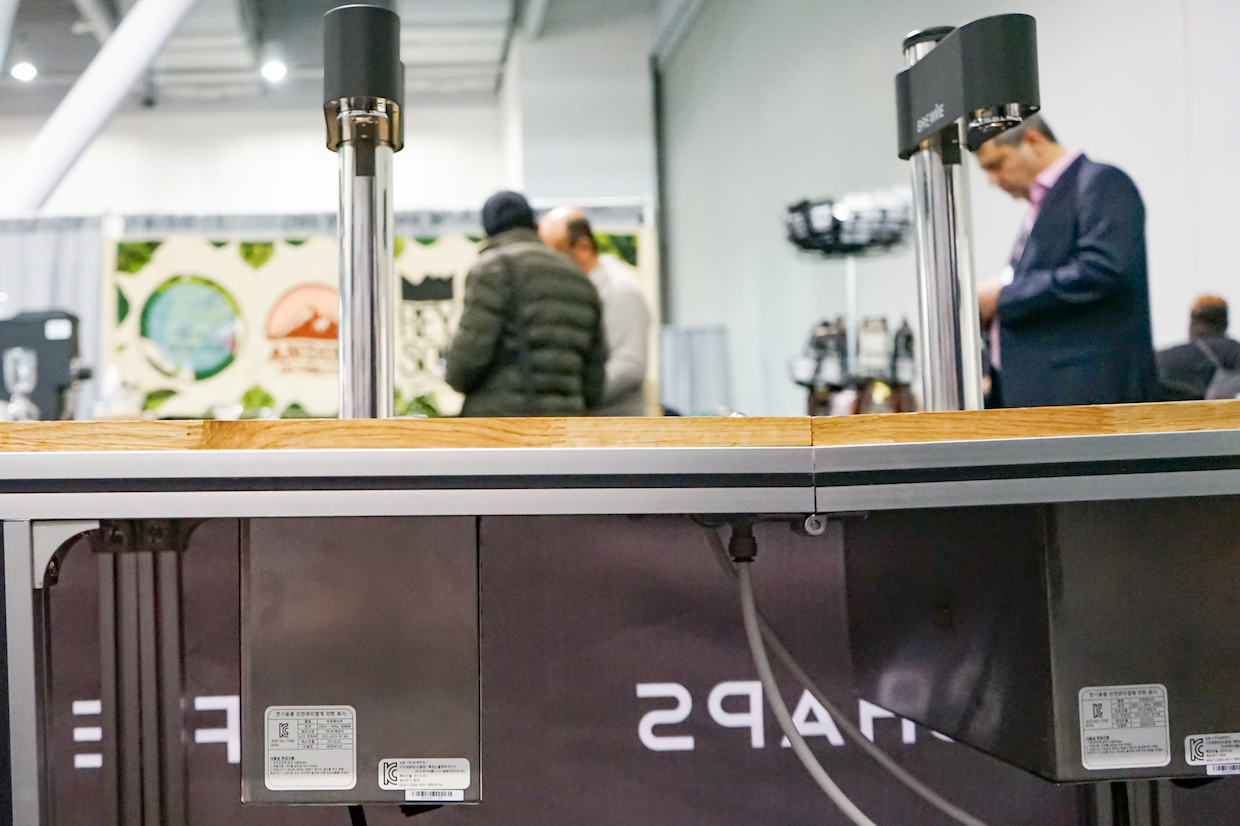 “We have only the 1-liter tank, but we have two heaters,” Coffee Chaps Sales Manager K. B. Park told Daily Coffee News at the SCA Expo in Boston last month. “When the brewing finishes, the new water immediately comes in and the first heater is immediately heating water up to 60 or 70 Celsius.”

The second heater finishes the job, heating water to the recipe’s designated target temperature. Park said the system requires a one- to two-minute recovery phase between cups.

“Our customers usually use two or three heads so they can brew continuously,” said Park. 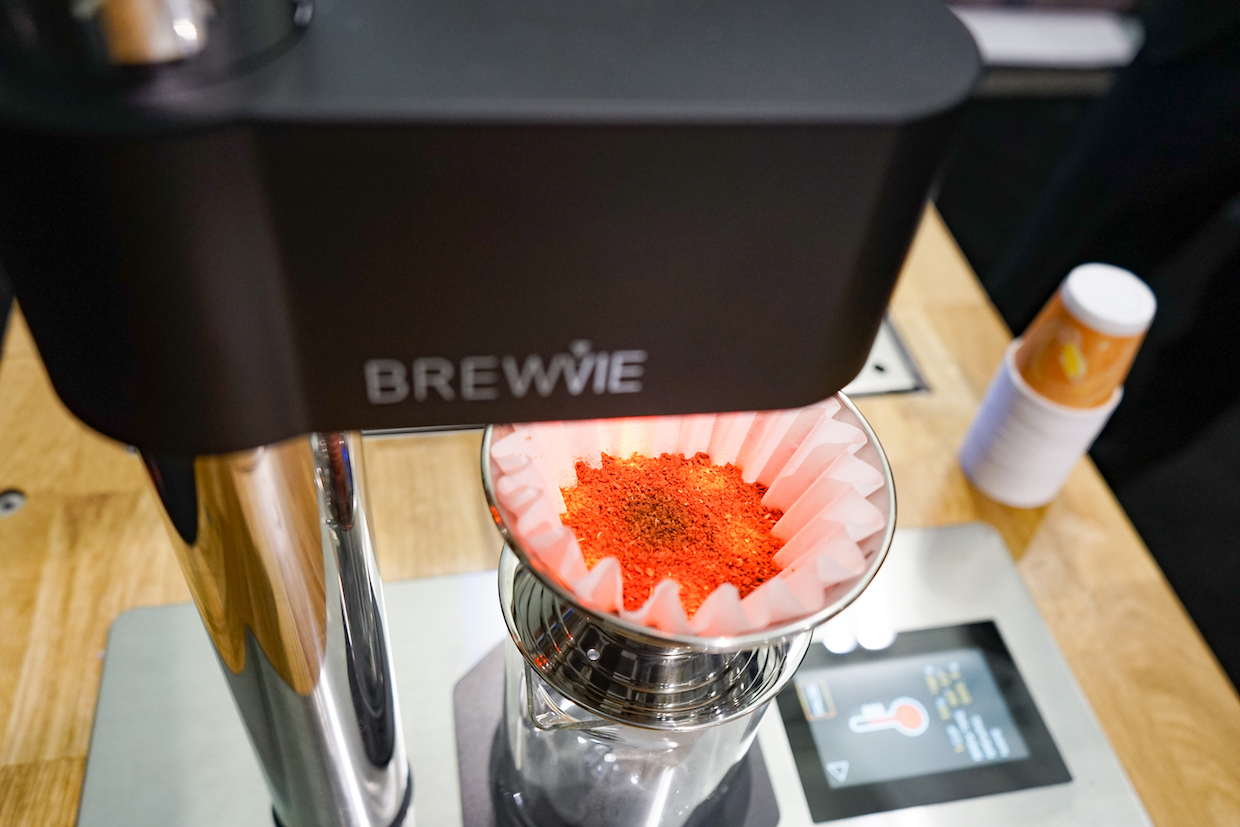 Variables that are adjustable within each profile include the time, temperature and total weight of water, as well as the flow rate, variable within a range of 4-10ml per second. The system includes a scale, designed and manufactured by Coffee Chaps, for measuring the beverage weight throughout the brewing process and incorporating that data into the profiles.

Each unit can store up to 18 profiles locally, and connects via Bluetooth to smartphones for access to a cloud server using the Brewvie app. Additional profiles can be stored and shared via the cloud, and smartphones can be used to craft and execute brew profiles.

Brewvie can also be controlled directly through its built-in 4.3-inch touchscreen display, through which users can set and execute profiles as well as monitor the current status of the brewer. 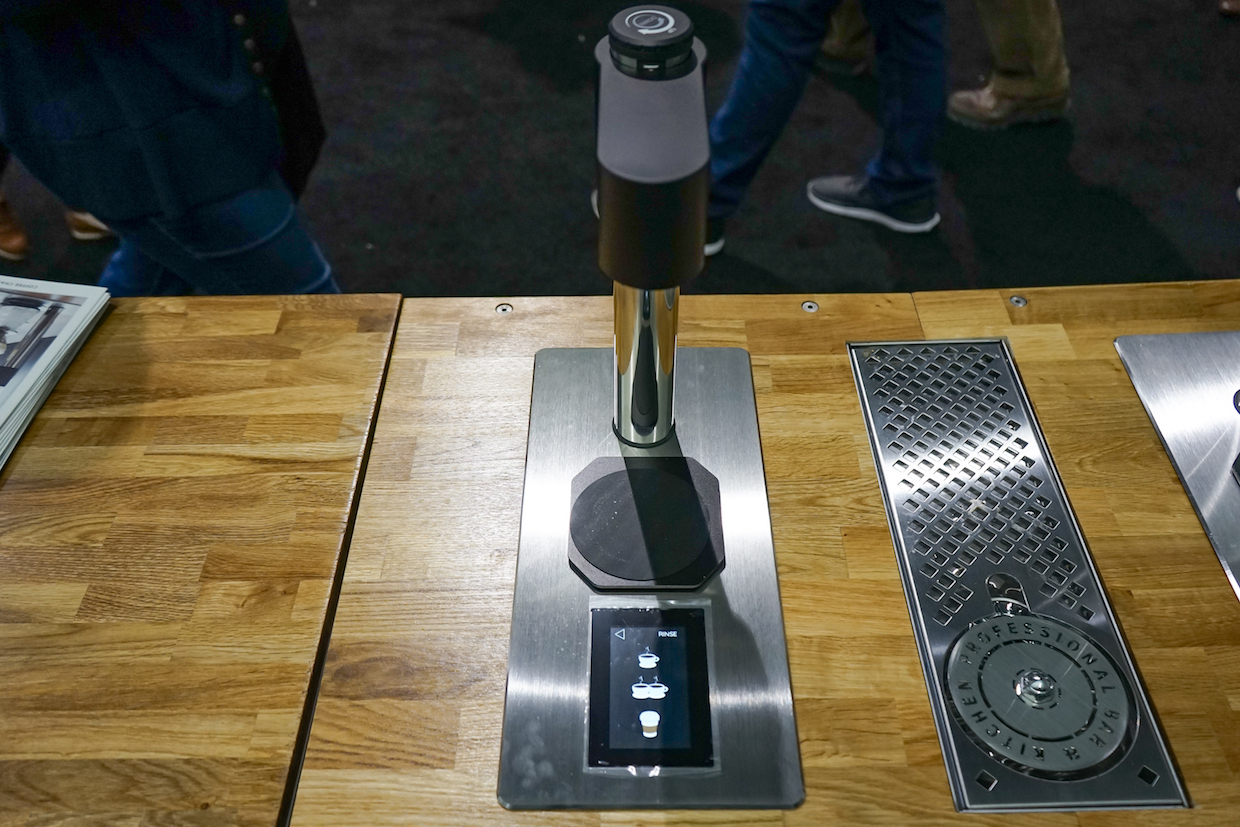 While its first appearance on U.S. soil was at the SCA Expo in Boston last month, the Brewvie 2’s initial launch occurred at the GulfHost 2018 hospitality and foodservice equipment trade show in Dubai last November, where Park said it won an innovation award.

BSEC Electronics took its first turn towards coffee roughly eight years ago, Park said, when it started designing and manufacturing electronic brewing products for the Japanese company Hario, including the relatively high-tech Smart Seven Coffee Maker. The first Brewvie machine debuted on the Korean market in April of 2017. 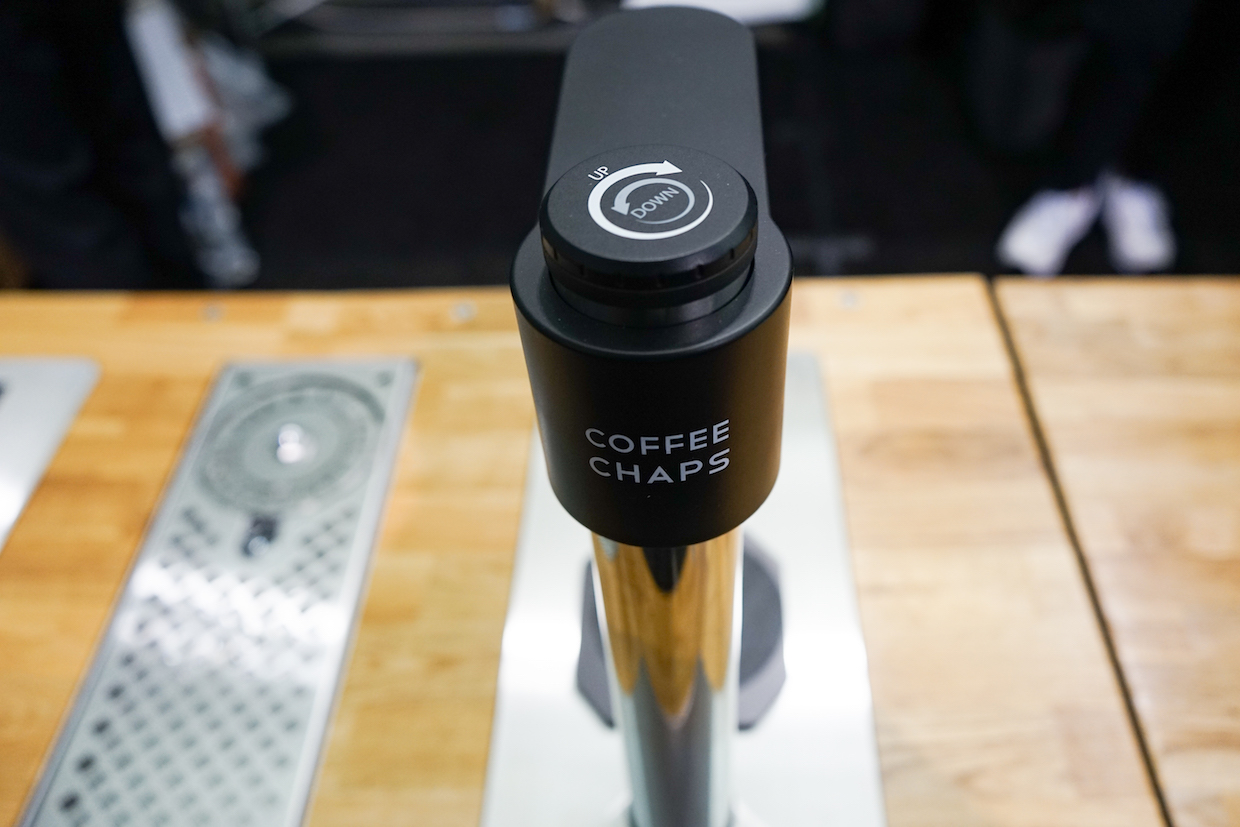 Feedback from buyers of the original Brewvie led to the upgrades and revisions now included in the Brewvie 2. These include an internal water circulation system that improves the consistency of temperatures at the group, and a circle of colorful LED lights that beam down onto the coffee bed to help users quickly and accurately center their brewers underneath the showerhead.

“We are here to meet the American people, hear their opinion and their thinking,” said Park, noting that the Brewvie 2 is just now entering the U.S. safety certification process prior to becoming available to the U.S. market. 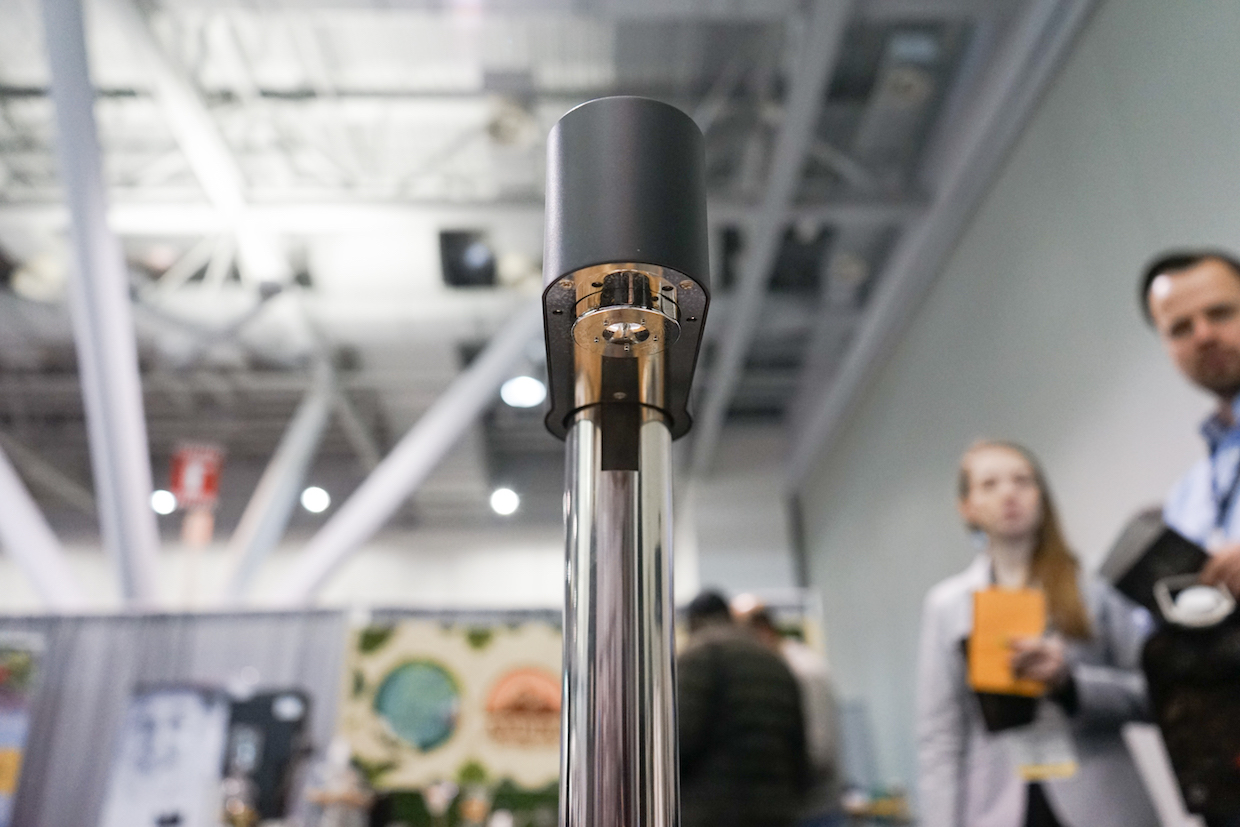 Park said Coffee Chaps aims to have the Brewvie available to U.S. buyers by the end of 2019. The anticipated retail price of a single unit is US $4,000.