On the Unbearable Sameness of Kitschy Corporate Coffee Shops 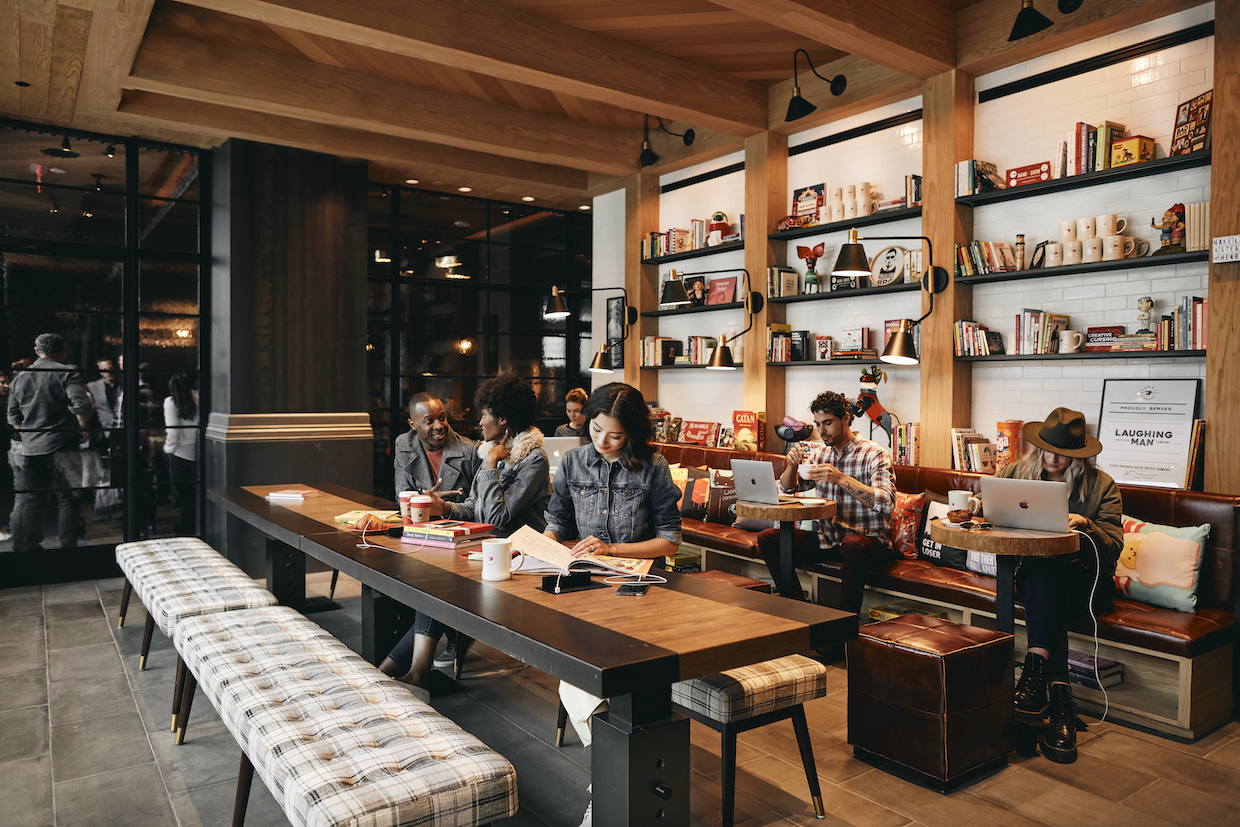 Sometimes I fear I am aging without grace.

Though this is not yet a condition formally recognized by the medical community, its primary symptom is an unmistakable tendency towards mild irritation at the seemingly innocuous words and actions of others.

It’s not the kind of overt, “get off of my lawn” gracelessness. It’s more like an irksome twinge brought on by the benign: some strangers’ kid using entirely too much paper towel after barely washing his hands in a public restroom; the simple declaration “I love tacos”; or the misuse of the word “intentional” in the business world to merely mean “strategic, but, like, with heart.”

To become negatively affected by such soft slights is the telltale tick of aging without grace. To embrace it fully, one must let all these micro annoyances trickle in and out of one another to form a cold, dark pool that threatens one day to envelope one’s perspective almost entirely. And for as much as there is to admire about the coffee industry, there’s no more active river of these nano-nuisances — no greater contributor to the darkening of shadows beneath an increasingly furrowed brow — than in the world of coffee marketing, where otherwise harmless words are weaponized to manipulate, confuse and ultimately bait and hook consumers. 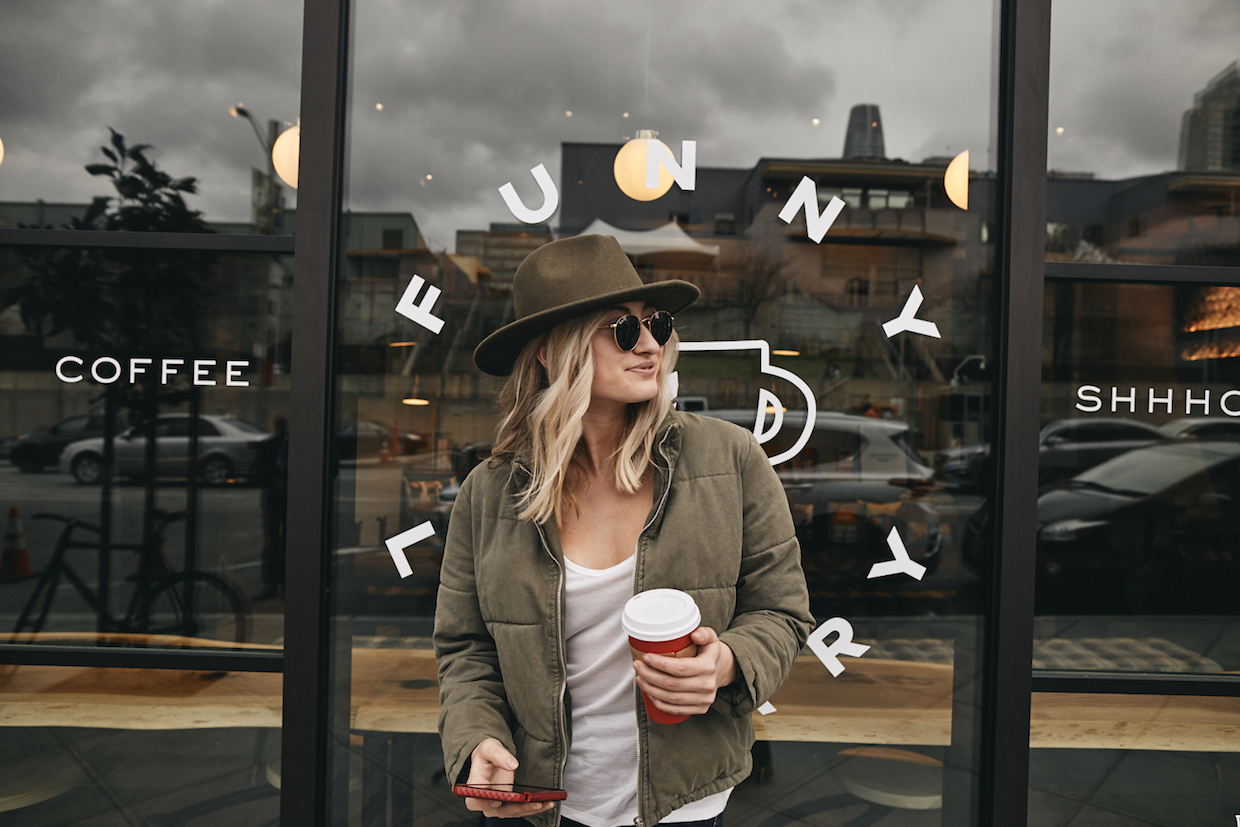 I was reminded of my own disgrace this week when I came across a press release titled: “Funny Library Coffee Shop At Virgin Hotels & Laughing Man® To Create A New Caffeinated Experience In San Francisco & Future Virgin Hotels.”

The trademark symbol alone is like a pencil jab to the ribs, but there was so much more to unpack here.

Virgin Hotels, the “lifestyle hotel” brand (not a thing) of English billionaire Richard Branson’s Virgin Group, had announced that it had opened the Funny Library Coffee Shop in San Francisco, with several more on the way, which all happen to be in markets where real estate prices have skyrocketed over the past two decades. Providing the coffee muscle and co-brand for the cafe is Laughing Man Coffee Company, the coffee and social enterprise founded by another well-to-do celebrity, Hugh Jackman. For what it’s worth, the coffee brand has been acquired by the JAB-owned Keurig Dr Pepper.

But there’s plenty to like about this partnership. Both Branson and Jackman have maintained philanthropic edges throughout their prolific careers, devising and investing in humanitarian issues all over the globe. Jackman co-created Laughing Man after a trip to Ethiopia in which he was deeply inspired by coffee farmers and their economic plight, according to the company’s own origin story. Proceeds from LM’s two New York cafes — plus from the San Francisco Funny Library shop and subsequent Virgin-housed shops — will go toward the Laughing Man Foundation. A companion to the company, the Foundation is actively investing in numerous projects designed to benefit coffee-growing cooperatives and communities, through building schools, providing college scholarships and more.

So why does this make me so cranky? 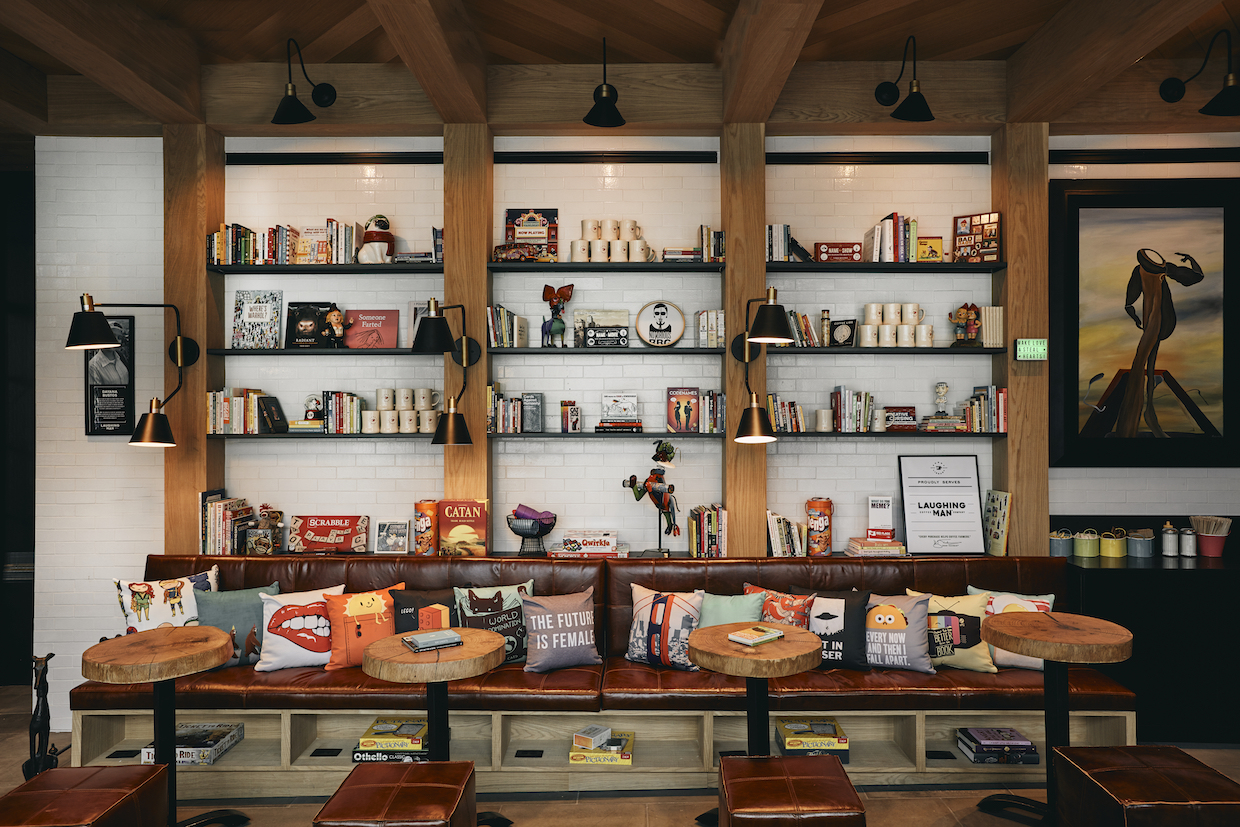 It started with the bastardization of the “library” concept. The “library” in this case includes not-for-loan titles like “Cats on Catnip,” a picture book showing cats in awkward positions, or “Basic Witches,” described by its publisher as “a magical lifestyle guide for everything from powering up a stylish crystal to banishing terrible Tinder dates.” There’s Cards Against Humanity, an RBG clock, and a statuette of two female gnomes puckering up for a selfie.

Then there are pillows carefully arranged on a cozy bench beneath some tasteful double wall sconces. One mocks the very concept of book reading as a television is paging through a text titled “how to be better than a book.” Of course, there’s a taco pillow, with the caption “sometimes I fall apart.” There’s even a pillow that says, “The Future is Female,” a fine sentiment were it to come from a living human, perhaps someone who is not a white, middle-aged millionaire.

Just outside of this little playland for adults is a black-and-white photo of a coffee farmer, obscured by a lamp. For the disgraceful ager, it’s difficult not to lump this image in with the rest of the kitsch.

The big business of relatively small-looking specialty coffee became very clear by the time Starbucks began unveiling its Reserve-brand roasteries. In the years since, trends in specialty coffee marketing, branding and interior design have been marked by a period of remarkable uniformity.

There’s nothing egregious about a hodgepodge collection of department store nicknacks that contribute to the faux authenticity of a place, but every taco pillow these days feels like a punch to the gut.

A more optimistic observer might suggest that there’s value in promoting coffee, the people who grew it and the brands that roasted it in an attractive space that inspires a bit of pop-centric fun and whimsy — all while supporting at least one good cause.

Yet to someone intent on aging without grace, every picture of a bug-eyed kitten stoned out of its mind is 1,000 words lost; every photo of a farmer a marketing piece disguised as social accountability; spaces for an exclusive group of people to work in isolation or to grab a quick fix disguised as an inclusive social hub.

The vibe I’m getting from this post isn’t crankiness, it’s jealousy. Laughing Man is not only doing but is *based on* doing all the humanitarian things that coffee magazines, like this one, are always complaining that the coffee industry should be doing. But this article is an attempted takedown on purely superficial means. Hugh Jackman is white, so *obviously* his money is no good for helping people. The decorating tastes in his coffee shop are ironic, which I’ll choose to ironically hate, because reasons. The tone in this article reads as coming from someone who is going to be bitter no matter what, even when someone starts a coffee company doing literally exactly what we wished the coffee industry were doing more of