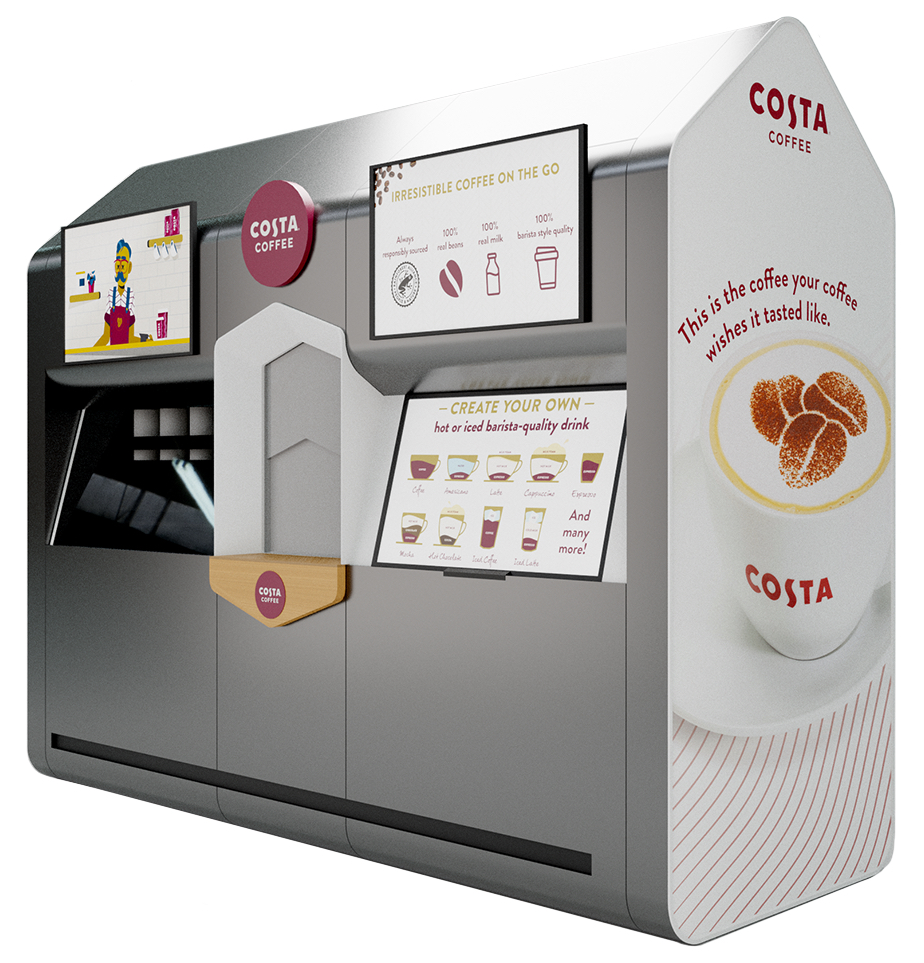 For as long as air travel is curtailed by the widening spread of the novel coronavirus, the airport terminal robot coffee wars are likely to remain cold.

Outside of airports, however, the demand for higher-quality, contactless coffee experiences may be on the rise, the latest sign of which came over the summer with news of UK-based coffee giant Costa Coffee‘s acquisition of Briggo, the Austin, Texas-based provider of automated coffee kiosks.

The financial terms of the acquisition have not been made public.

While Coca-Cola-owned Costa has yet to open any brick-and-mortar coffee shops in the United States, it does operate about 50 “Smart Cafes” around the country. Those are essentially freestanding super-automatic bean-to-cup beverage vending machines, capable of a variety of milk-based coffee drinks.

Briggo’s Coffee Haus units are substantially larger than Costa’s Smart Cafes, and have been pitched for a more craft-oriented specialty coffee experience with drinks made from whole beans and fresh milks, while also being fully automated.

The five currently active Briggo Coffee Haus units have all been fully rebranded to Costa Coffee BaristaBots, and are now a part of Costa’s auto-coffee portfolio.

“All are operated and managed by the Costa Coffee team in Austin, Texas,” a Costa representative recently told Daily Coffee News. “Our Smart Cafes will continue to operate alongside our BaristaBots.”

Any future Briggo-made machines will reach the market dressed in Costa Coffee BaristaBot branding, according to the company. Briggo’s primary U.S. airport competition, Cafe X, announced in January of last year that it would be unplugging its downtown San Francisco locations, and then in August also closed its Bay Area airport locations.

Meanwhile, the market for automated coffee with robotic elements appears to be growing rapidly outside of airports, with multiple additional players entering the scene in recent years. The first automated cafe designed by Canadian robotics company RC Coffee opened to the public in Toronto in partnership with Dark Horse Espresso Bar this month, with plans for nationwide expansion to the model for 2021. Last month Chinese robotics company OrionStar unveiled the Robotic Coffee Master, while Russia-based MontyCafe, the Belarusian technology of Rozum Cafe, New York City’s Truebird Coffee and more continue to attract attention to their autonomous robotic barista stations.

Through six rounds of funding, the most recent of which was August of 2018, Briggo had raised a total of $19 million in funding to grow its fleet of rectangular robo-baristas. Costa Coffee, founded in 1971 and acquired by Coca-Cola in early 2019, has operations in more than 30 countries around the world, including China, Europe, the Middle East, Africa and Asia Pacific.

“The investment in Briggo’s technology and expertise, which includes Briggo Coffee Hauses in several key customer locations, has been an exciting addition to Costa,” the Costa representative said. “It will help us accelerate our innovation around fully autonomous, touch-less specialty coffee solutions.”