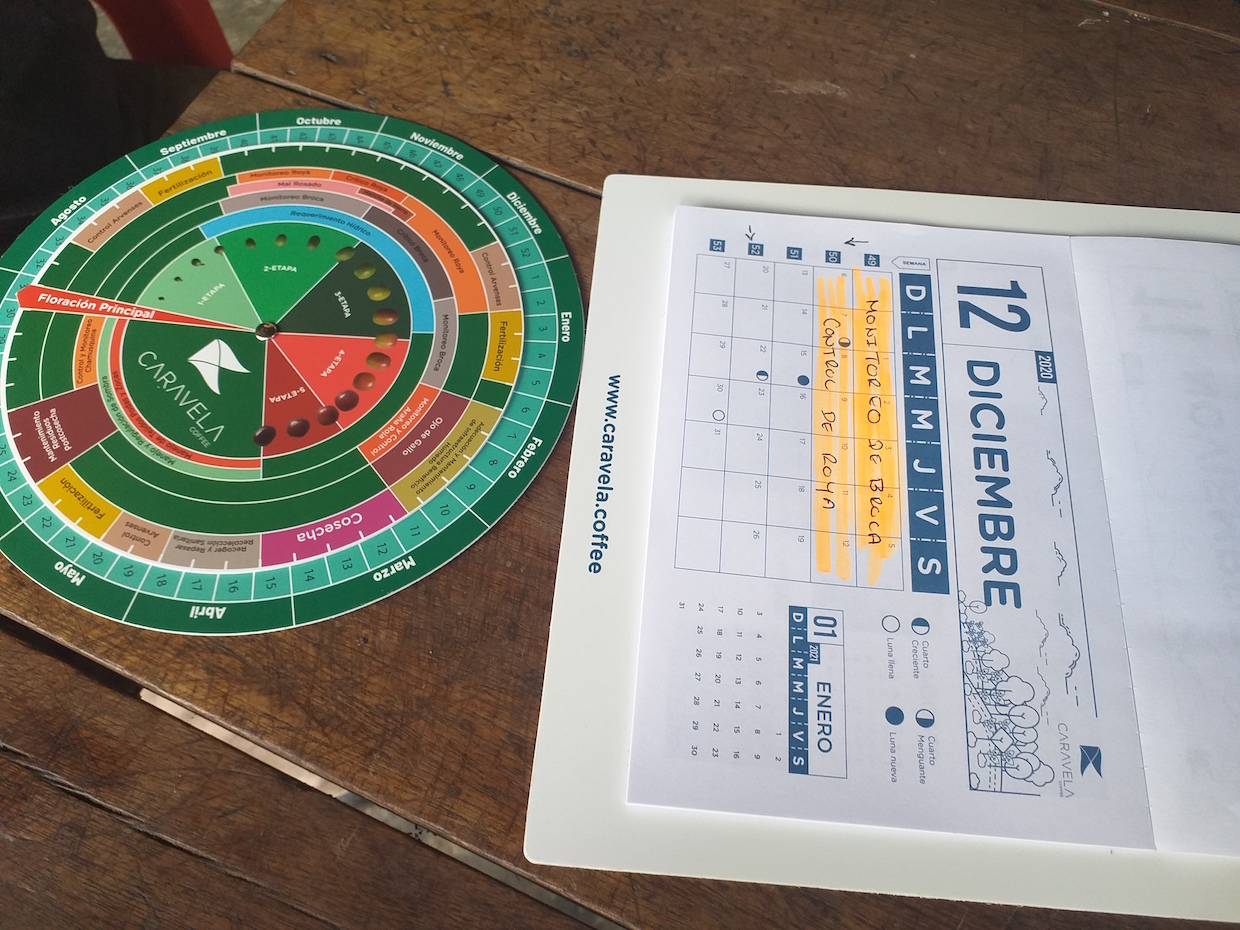 “With this tool, they can schedule all their farm’s activities, ensuring that all critical tasks are taken care of at the right time — such as fertilizing, managing pests and diseases, planning the hiring of pickers, or preparing their fermentation tanks and drying patios before the harvest,” a Caravela spokesperson recently told DCN via email. “We see this tool helping them optimize their farm investments, maximize their incomes and improve their coffee quality, ultimately allowing them to be more profitable and sustainable.” 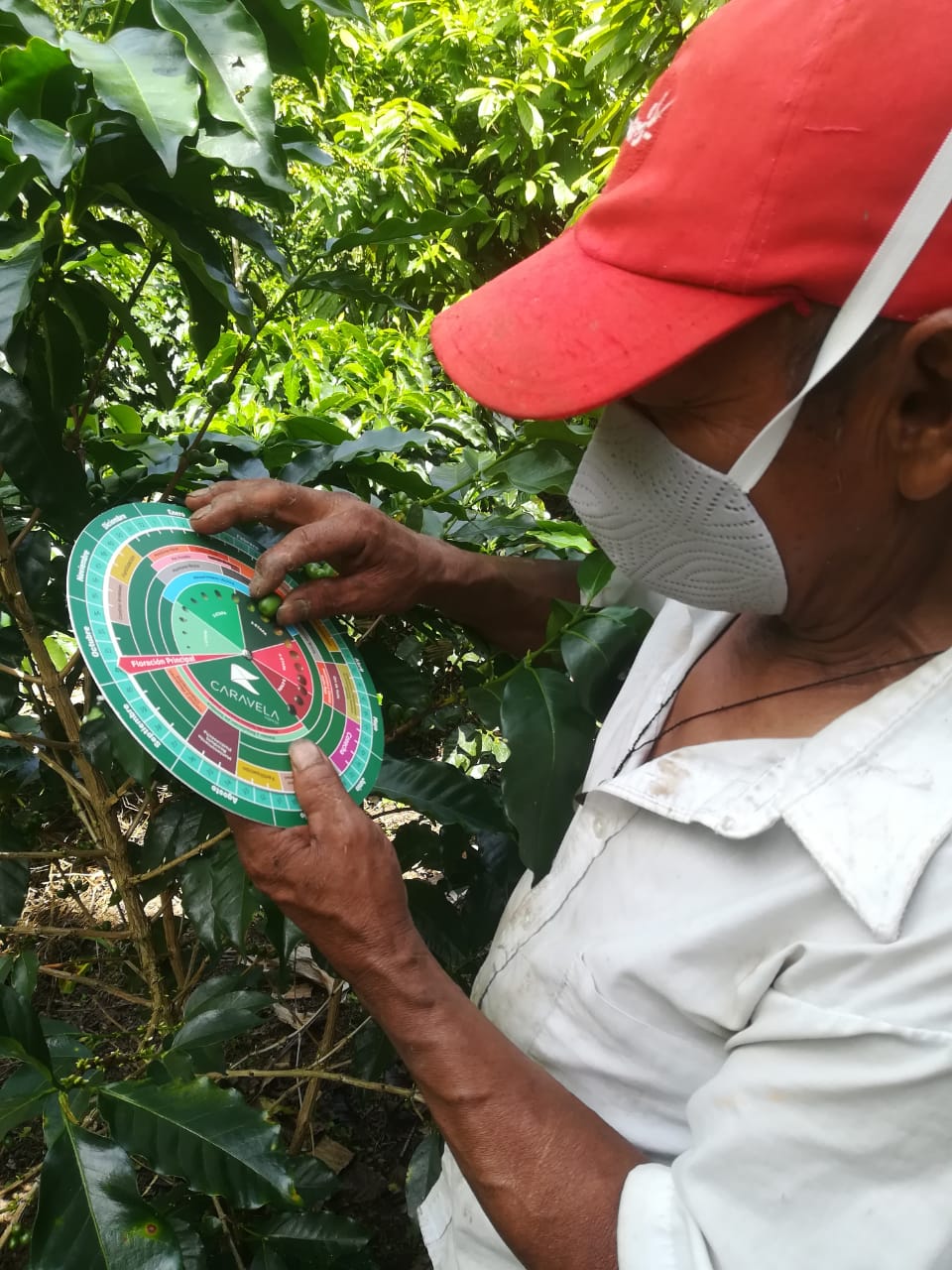 The Compass was initially developed by the head of Caravela’s grower education program, called PECA, Hector Calderon, who saw that many coffee farmers were struggling to identify and maintain precise dates to monitor for different crop threats such as coffee berry borer or leaf rust.

The Compass follows Calderon’s own morphology research comparing coffee’s cycles to the pollination periods of other plants.

“It occurred to him that coffee trees followed a reliable, predictable cycle, with stages of development occurring at specific moments, from pollination to cherry ripening,” Caravela said. “In essence it was a continuous reproductive cycle.”

After drawing up a prototype with his son’s pencils and a piece of cardboard, Calderon and Caravala Coffee Regional PECA Director Alieth Polo continued to refine the circular calendar using research from agricultural research groups such as CATIE (Costa Rica), CEDICAFE (part of Anacafé in Guatemala), and Cenicafé (Colombia). 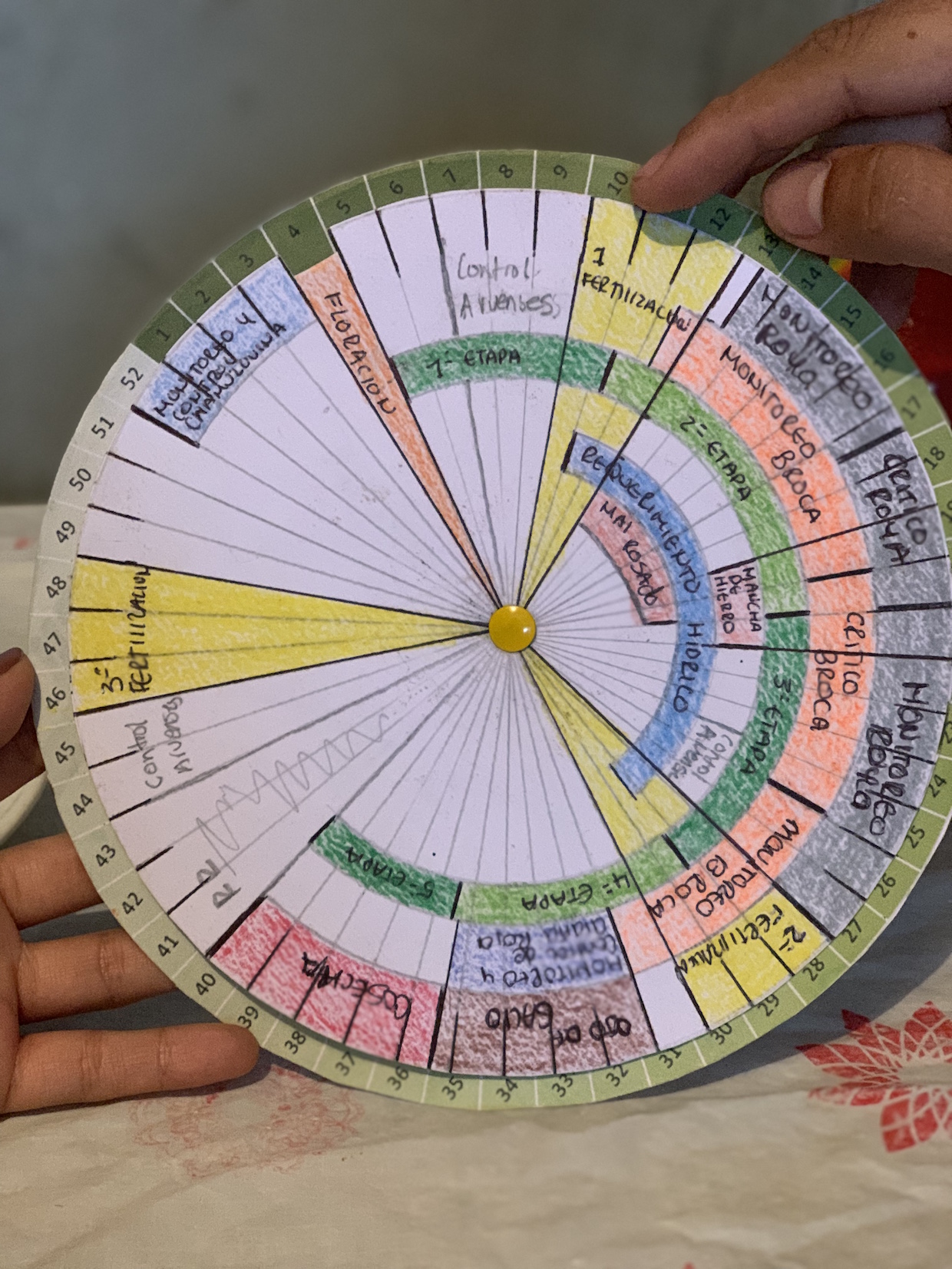 A prototype of the Coffee Compass as created by Caravela’s Hector Calderon.

Every farm management or monitoring activity in the Compass relates to the flowering date of coffee plants, which is widely understood to occur approximately 38 weeks prior to ideal cherry maturation, although it may occur at different times for different crops within a single farm.

Given the flowering dates, the Compass can point to the ideal timing for activities such as: spraying for plants that are susceptible to rust; applying fertilizers; monitoring for coffee berry borer (Broca) or leaf rust (la Roya).

In addition to agronomic, harvest and post-harvest-related activities, the Compass includes suggested times for practices such as pruning, shade regulation and waste management.

“Even though most people might think it all ends with the picked cherry, coffee is a perennial crop, so the cycle never ends,” Caravela said. “One of the original meanings of the word ‘compass’ is ‘to go around [something] in a circular course,’ hence the name Coffee Compass, though the notions of direction and guidance are there as well.”

Héctor Saul Reyna using the Compass in concert with a calendar. Photo courtesy of Caravela Coffee.

One of Caravela’s long-running buyers, UK-based roaster Taylor’s of Harrogate, agreed to underwrite the first batch of 2,800 Compasses, which were delayed for release due to the pandemic, but began making their way into fields late last year.

Caravela has since made the Compass available for sale online for US$50 to buyers in Colombia and $80 for buyers elsewhere.

The Compass is currently only available in Spanish, although Caravela told DCN that an English-language version may be produced given early signs of demand in other coffee-producing parts of the world.

While the Compass is intentionally designed as a sturdy analog tool — one not requiring an internet connection — the company is also designing a version to work with its forthcoming smartphone app that will tie in with the PECA education program.

I am a farmer in Kenya how can I get the Compass tool.