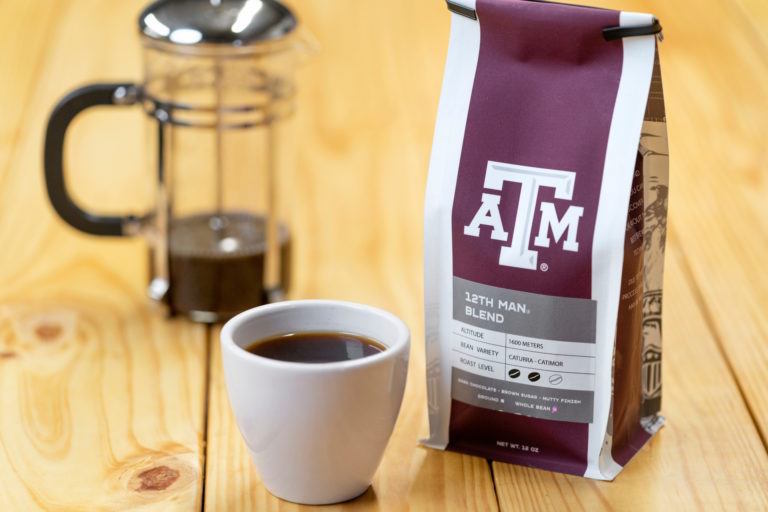 With a brand name appealing to the university’s all-too-faithful sports fan base, the coffee product is financially benefiting the work of the coffee geeks down at the  Norman Borlaug Institute for International Agriculture, home of the university’s 5-year-old Center for Coffee Research and Education.

The coffee itself comes from about a dozen small-scale farms in Guatemala roasted by College Station’s own What’s the Buzz Specialty Coffee to one of three levels: a medium “12th Man Coffee Blend,” the medium/dark “Midnight Yell” and the light roast “Howdy Blend.”

The project was particularly concerned with promoting disease- and pest-resistant coffee varieties among farmers who suffered during the coffee leaf rust pandemic that started in 2012.

In an announcement from the university, Chavez noted the prolonged price crisis associated with the commodities markets that have made coffee production unsustainable for many coffee producers in Central America.

“This is part of why we see a lot of migration from places like Guatemala,” Chavez said. “Farmers are leaving their coffee on the tree without being picked because the prices are so low. But by raising and selling high-quality specialty coffee, which costs a little more but is much higher quality, we are able to pay the farmers more money for their crops.”

9-ounce bags of 12th Man Coffee are currently making their way to prominent College Station/Bryan-area retailers such as H-E-B, Brookshire Brothers and the Stella Hotel, plus some Houston H-E-B locations.

Texas A&M was one of the major partners in the Pearl Project in Rwanda in the early 2000s, headed by Tim Schilling, later the founding CEO of World Coffee Research. How could it be “sowing its first seeds in the coffee business”? Unless you just mean retail coffee…

We appreciate your coverage and comments. However, Andy Carlton has it right. For the record, the Borlaug Institute at Texas A&M has had five international coffee projects, two in Africa and three in Latin America.