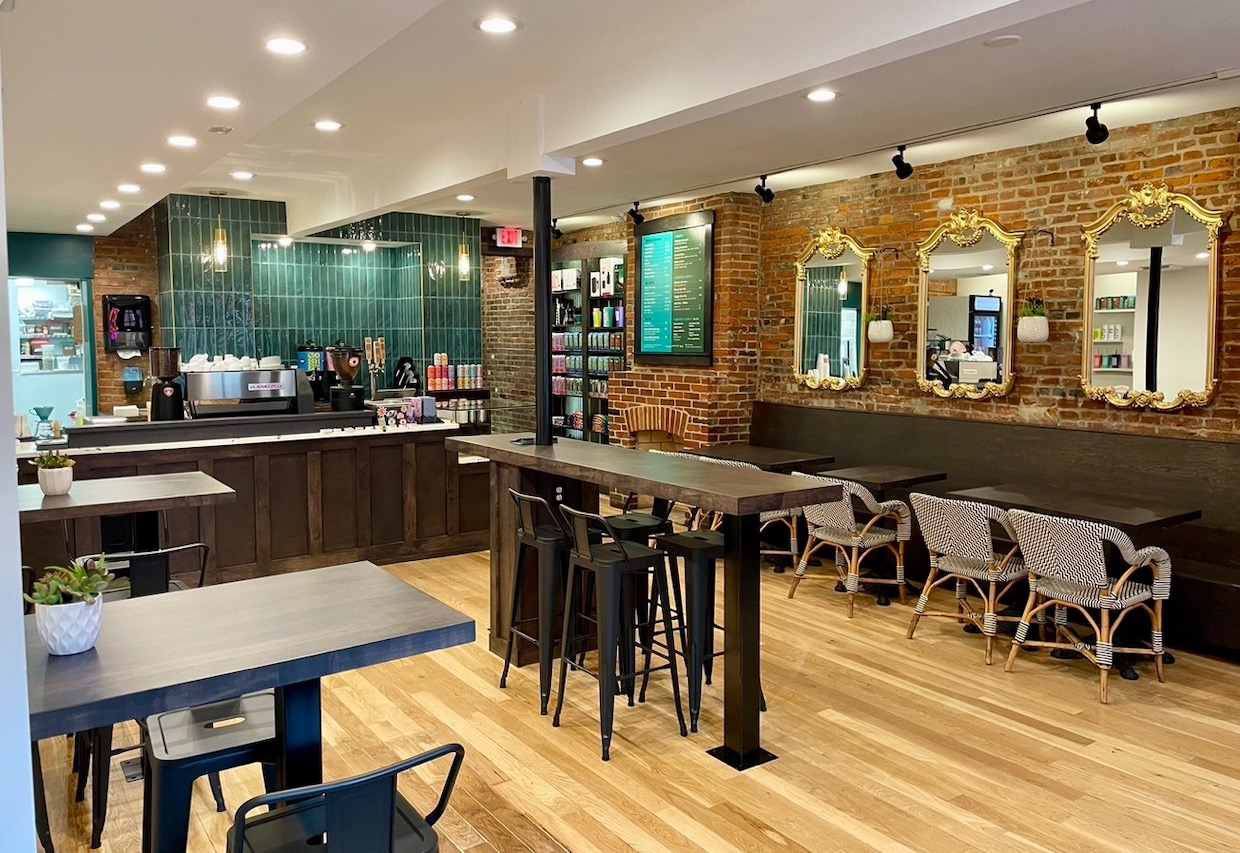 Inside the new Goshen Coffee shop in the Soulard neighborhood of St. Louis. All images courtesy of Goshen Coffee.

Blossoming into its 20th spring in business, Southern Illinois’ Goshen Coffee Roasters is celebrating with a fresh rebranding, a new Loring S35 roaster, and a new cafe in St. Louis, Missouri.

After housing a number of coffee shops over the past 25 years in the historic St. Louis neighborhood of Soulard, the 150-year-old house Goshen now calls home featured a grand opening last month. 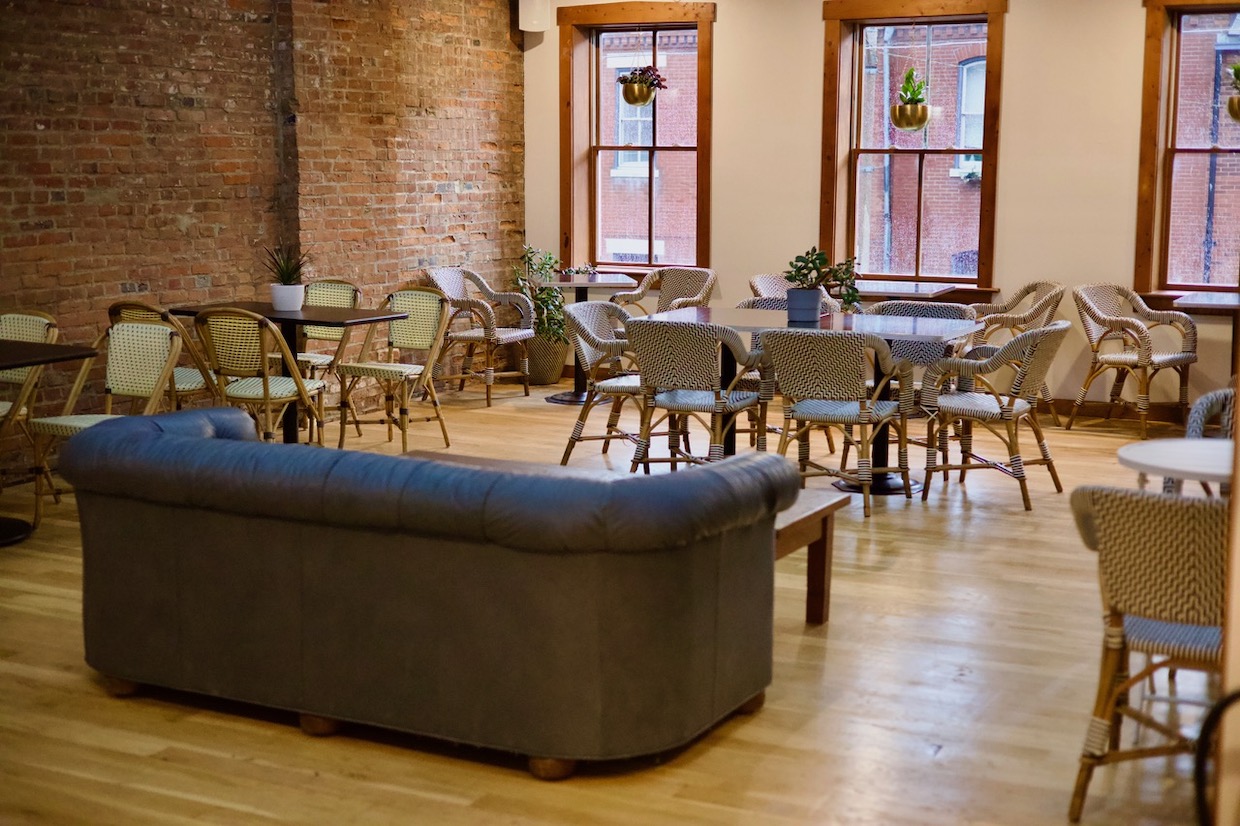 Goshen Coffee Roasters CEO and Co-Owner Jennifer Hughey told Daily Coffee News the interior design was led by co-owner Julie Beard, who also designed the company’s first cafe in Edwardsville, Illinois, with input from the whole team. The result, between the timeworn brick walls and warm wood floors, leaned into an energetic French/New Orleans style with ornately framed mirrors and black-and-white surfaces soothed by shades of green and sea foam. 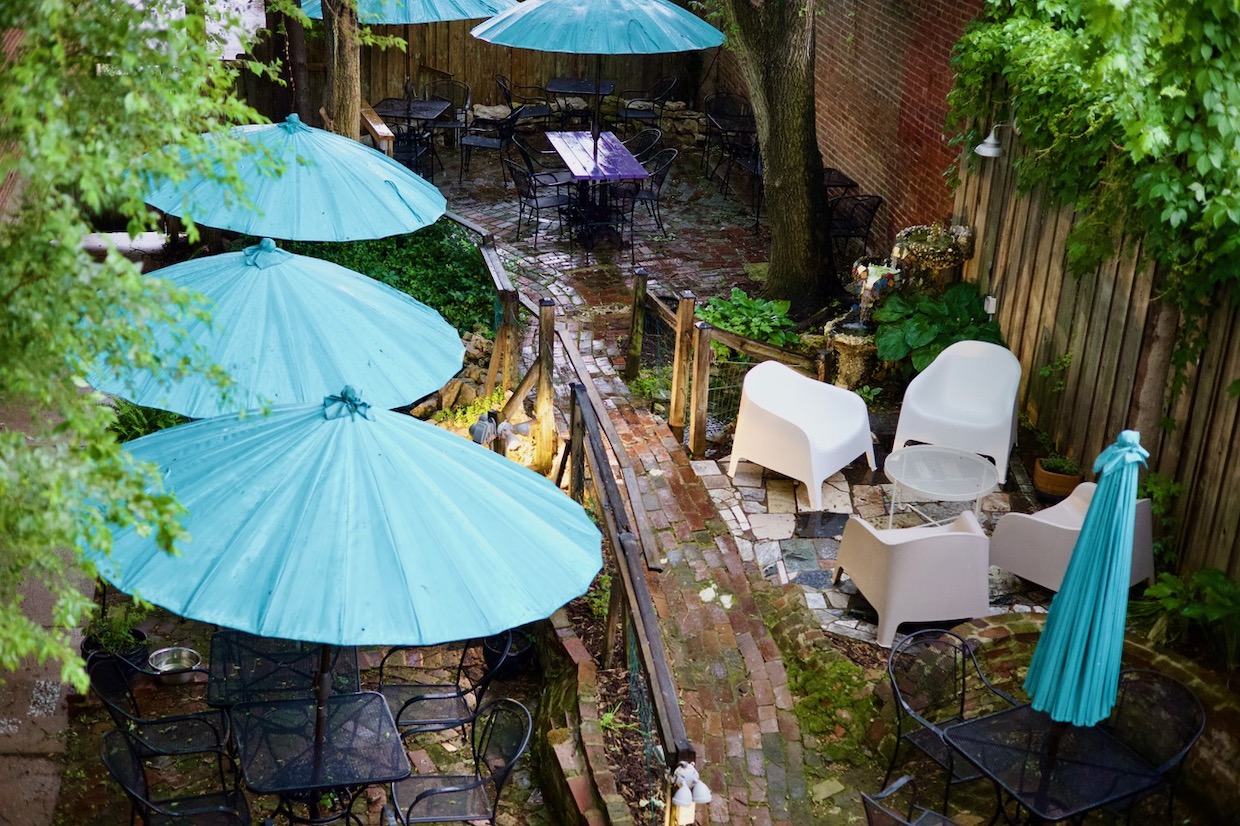 “We wanted to keep the design aligned with the Edwardsville cafe, but allow for the space to have its own vibe,” Hughey told DCN. “We wanted it to be something new in St. Louis, and a destination for people to come and meet up with a friend, hang out with family or just come to work, study or read a book.”

A “Feel The Energy” neon sign near one exit invokes Goshen’s new branding and packaging, which was designed collaboratively with St. Louis-based agency Toky. Leaving behind the Rosie the Riveter-type character introduced by co-owner Jay Beard when he initially bought the company in 2011, the brand now features electric bursts of color, eye/sun opening imagery and a touch of psychedelia. 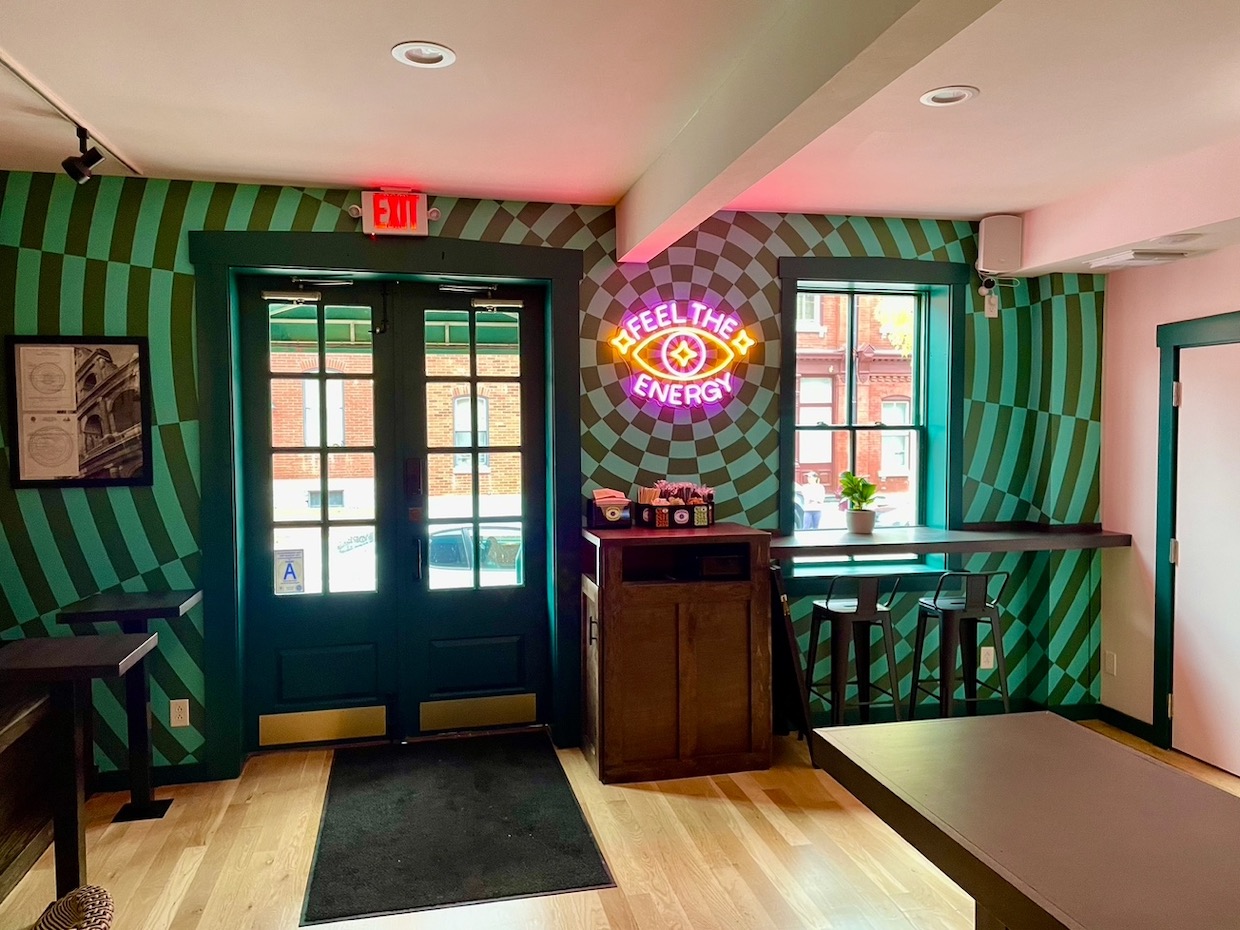 While references to the biblical land of Goshen can be found throughout the region — a legacy generally attributed to the writings of a Baptist minister who passed through the area in pioneer times — the new brand embraces the more modern name-referencing slogan, “Good Shit Energy.”

The playful psychedelic arabesque font created by Toky is layered above new color-coded bags to differentiate roast levels: pink for light; blue for medium; and green for dark. 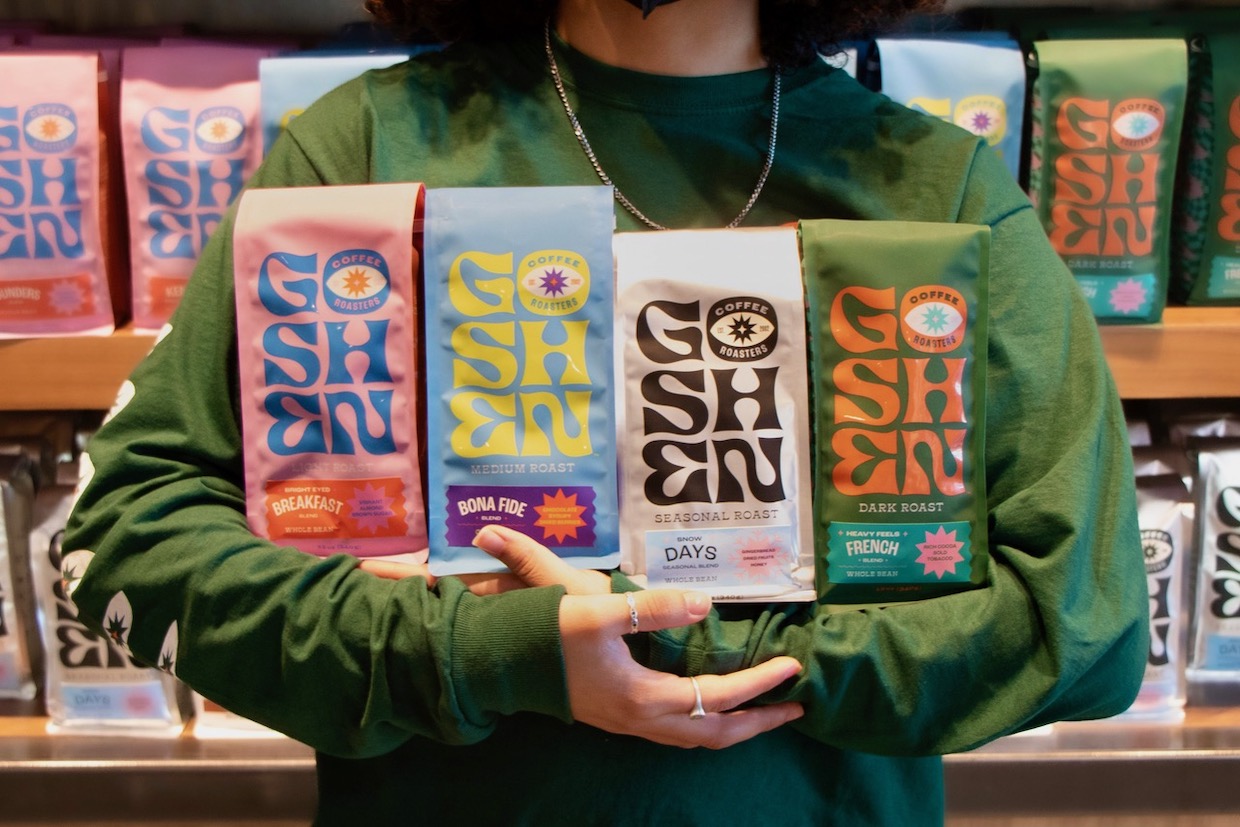 “We wanted our packaging to really jump off of the shelf,” Hughey said. “We also wanted to make it easy for the consumer to shop by roast level. We believe that we achieved all of our goals as we wanted to also capture the Goshen vibe, which is what we talk about on the back of the bag. We believe that by putting good energy out into the world, you get it right back.”

Inside the 3,000-square-foot roastery in Edwardsville, more good energy will be conserved through the efficiency capabilities of a new new Loring S35 roaster, whose capacity is approximately twice that of the original custom fluid-bed roaster that’s served Goshen to this point. 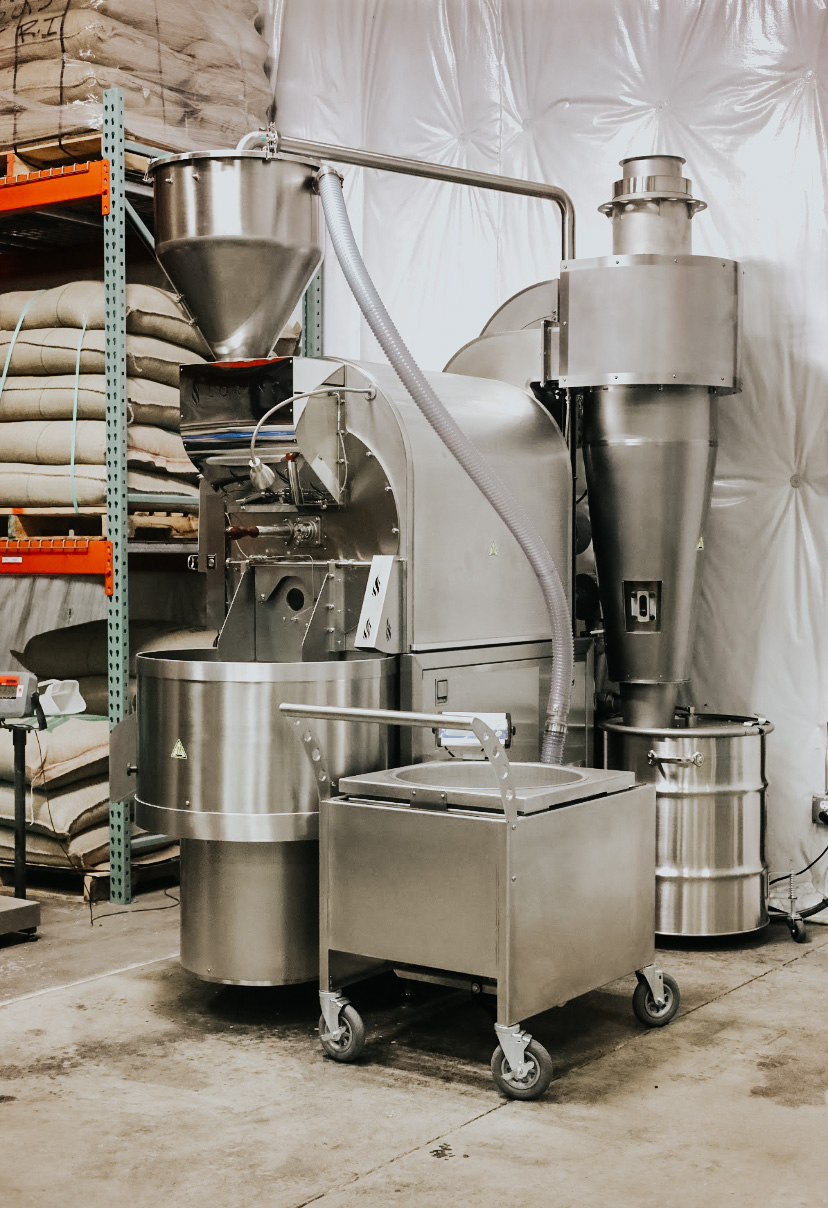 Goshen Chief Coffee Officer Tony Auger will join Carl Bringenberg in transitioning production onto the new machine by the end of next month.

“We plan to take Goshen nationwide from a retail and wholesale standpoint,” said Hughey. “We also have very ambitious growth plans for our cafe side of the business, and plan on opening more cafes over the next few years.”