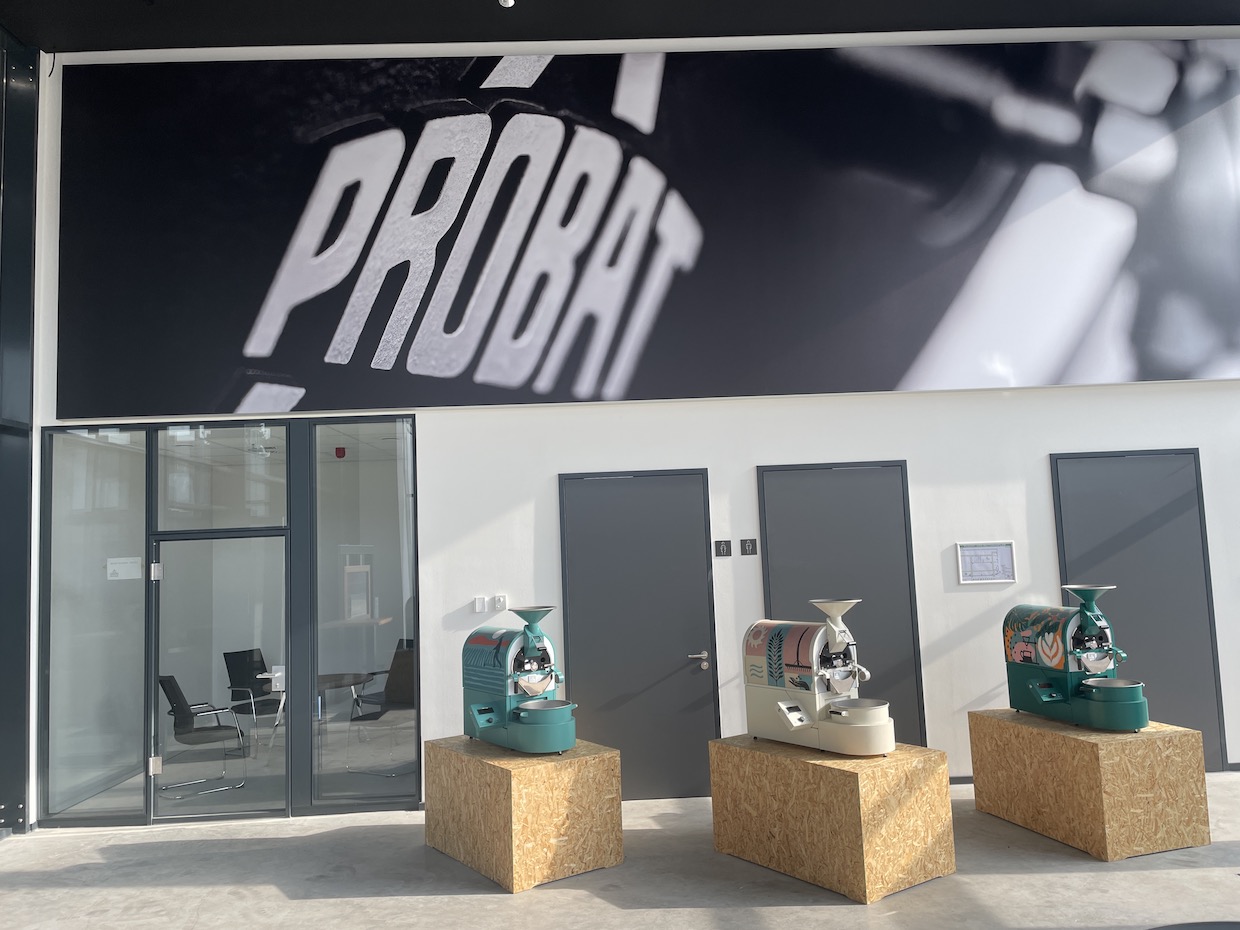 Coffee roasters on display at the Probat headquarters in Emmerich, Germany.

It represents the first broad-scale introduction of hydrogen power systems in the coffee roaster manufacturing industry, which has primarily upon natural gas, resulting in higher greenhouse gas emissions.

In addition to the hydrogen introduction, Probat recently completed a roughly roughly €40 million (US$39.8 million, as of this writing) expansion to the manufacturing plant at its Emmerich, Germany, headquarters for increased roaster production. 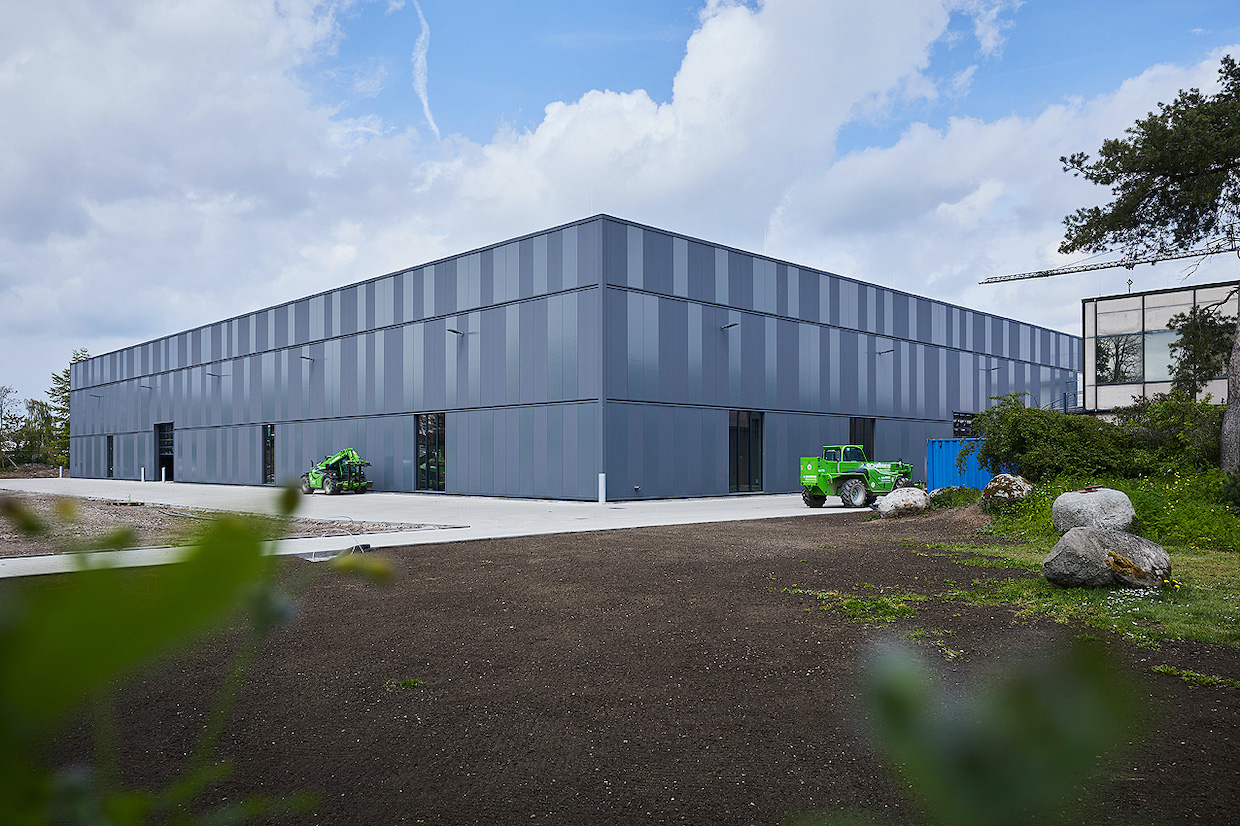 The company showed off its inaugural hydrogen machine, a Probat P05, at its invite-only Connecting Markets symposium in September.

“This is not just a proof-of-concept experiment; P05 is available for quotations and delivery next year,” Koziorowski told Daily Coffee News. “We will bring a hydrogen-powered shop roaster in other sizes to the market fairly soon. Adjustments of the burner technology for implementation in industrial roasters are currently in progress.” 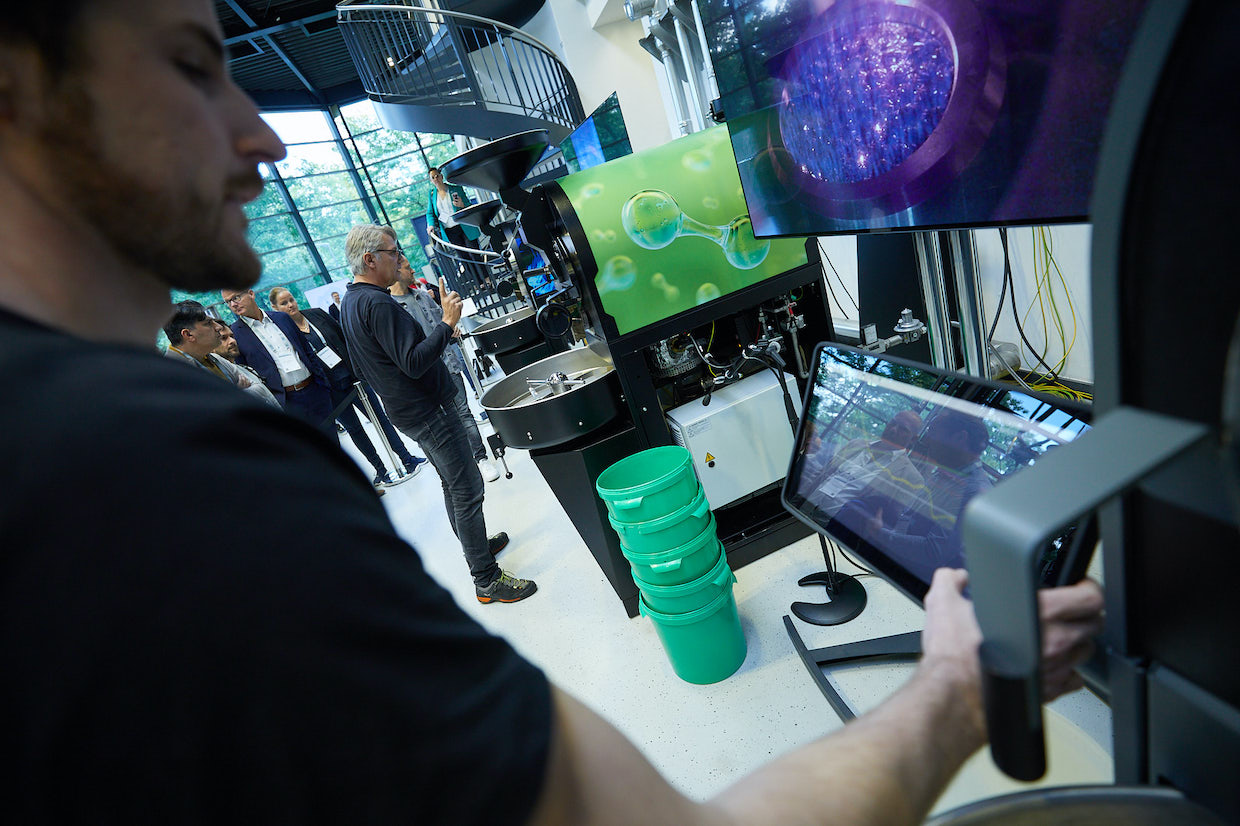 The hydrogen-power rollout comes at the end of a year in which Probat also dove headfirst into the field of electric roasters. Earlier this year, the company expanded sales of its electric P05 E roaster to the United States. Approximately three months later, it launched the electric 1-kilo-capacity P01, replacing the gas-powered Probatino sample roaster model.

Hydrogen burner retrofits will soon be made available for existing P05-model roasters, and the target for offering retrofit components for larger industrial production roasters is the beginning of next year.

Regarding the application of hydrogen power, Koziorowski said roasting companies could could turn to the existing infrastructures of other industries for safely acquiring the odorless, invisible and highly combustible gas. 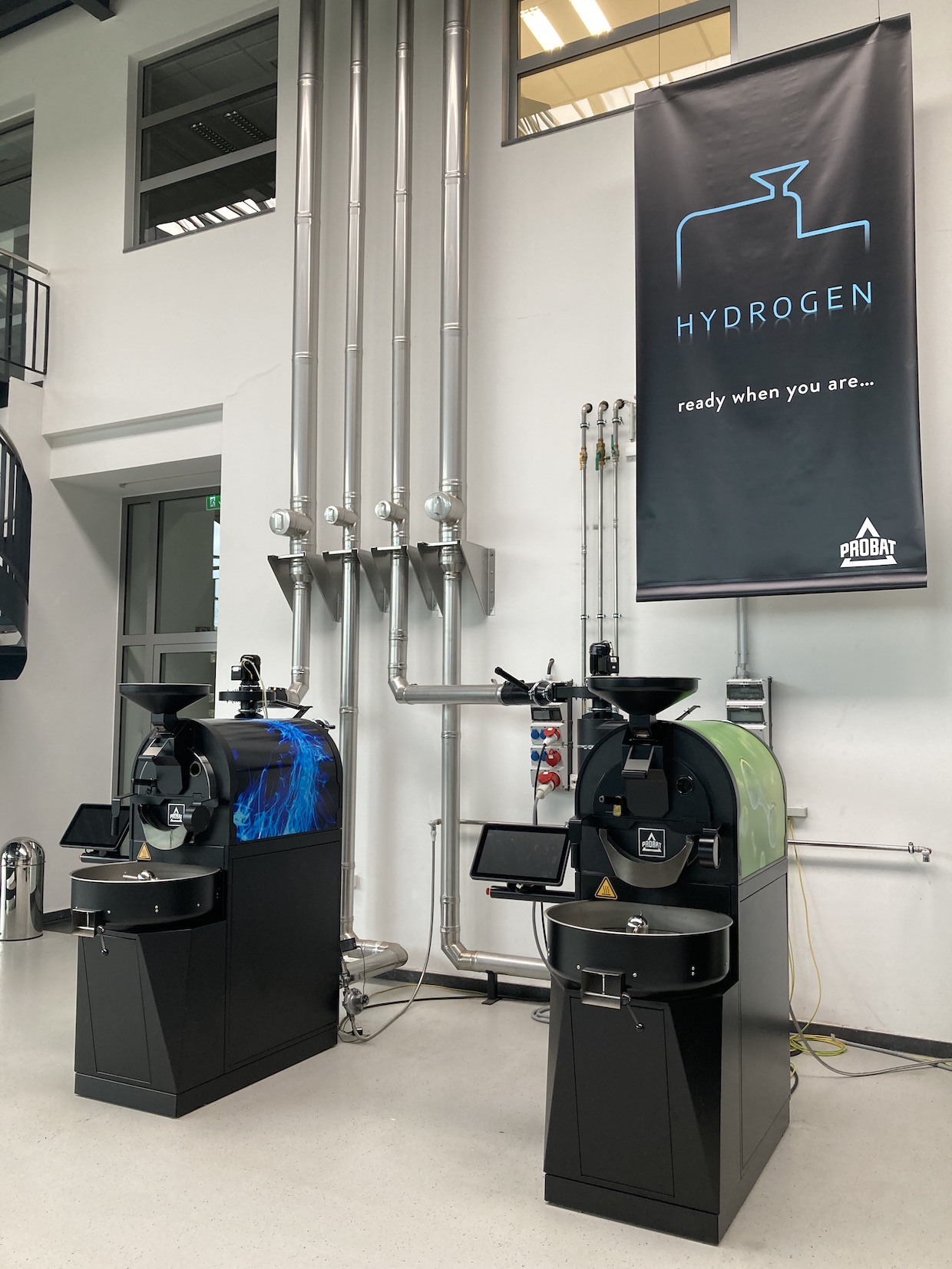 While not as convenient or environmentally friendly as electricity, hydrogen generated from low-carbon or renewable energy sources — a.k.a. “green hydrogen” — is widely considered to be a more sustainable option when compared to natural gas or propane.

“‘Green’ electricity is still considered the best option for powering a roaster, followed by ‘green’ hydrogen where direct electrification is not possible,” said Koziorowski. “Hydrogen has been used in different industries over decades, so safety standards exist. In some countries a refill system for hydrogen bottles exists, which could be used for a shop roaster. Also for the industry sizes there are different options available to get and store hydrogen.”

Hydrogen, electric and traditional roasters are all currently in production in Emmerich. New construction at the manufacturing plant includes some 21,650 square meters (233,038 square feet). 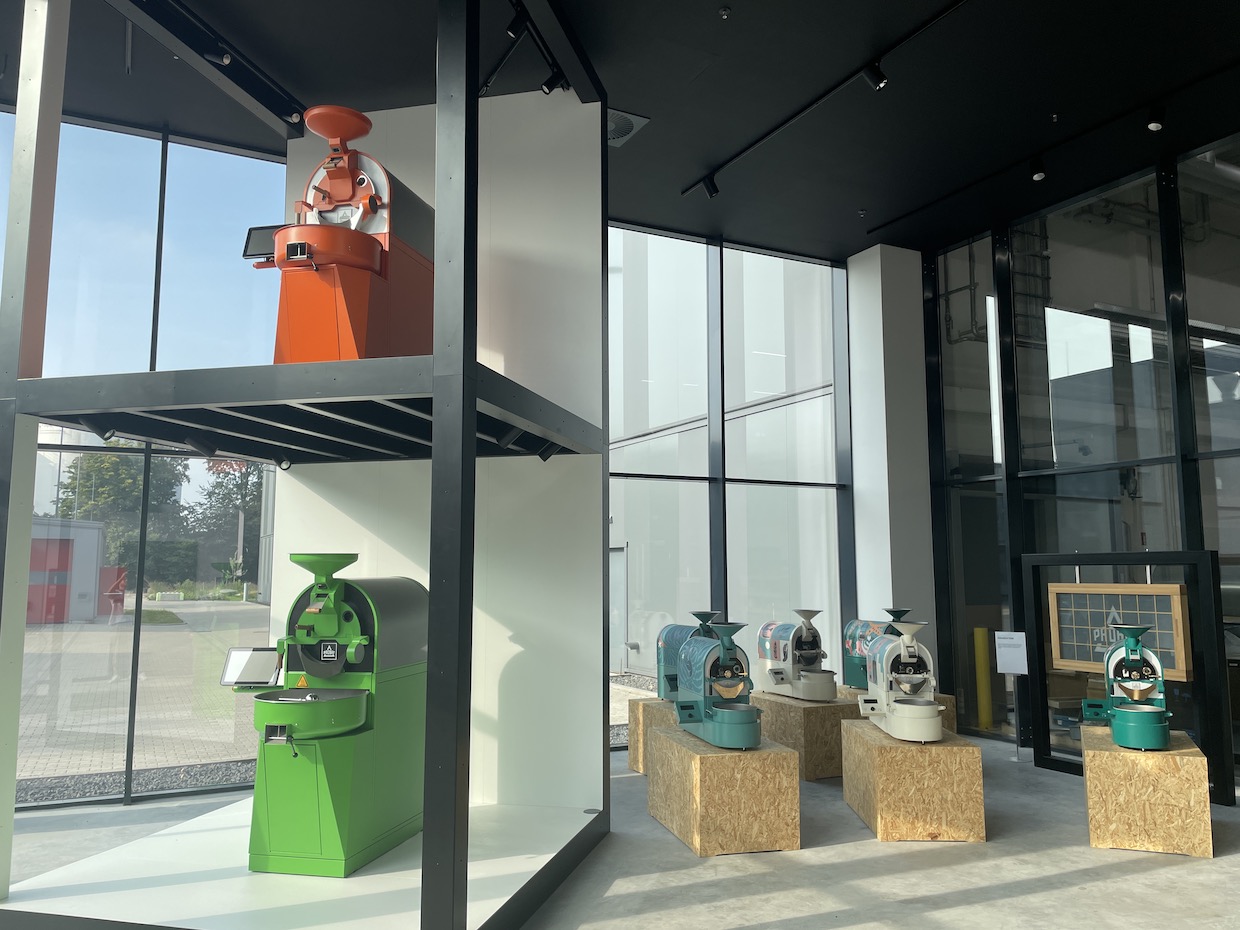 “While the new production hall was being built, work in the existing workshop adjacent to the new site never stopped,” Koziorowski said. “Now, production is in full swing in both halls.”

In addition to continuing development of hydrogen-powered burner systems for larger roasters, Probat remains focused on extending its PILOT 2020 software platform to its entire product portfolio. The company is also following a “climate action plan” announced in September, with the goal of reducing its carbon dioxide emissions to net zero by 2030.

Well, it seems they got ahead of time from current events.
If they develop burners for bigger roasters, they could offer current clients which use propane or natural gas in their roasters with this option as well, which could be suitable due to the higher costs in both gas and electricity in Europe.
Very well done, Probat!

As to Hydrogen, I keep my reservation if it turns out to be a better solution than natural or propane gas.