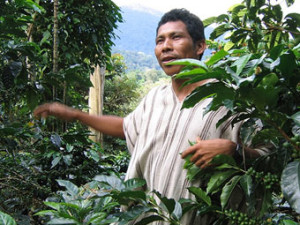 Peruvian Prime Minister Milton Von Hesse told the foreign press yesterday that the country’s coffee production is expected to drop by at least 25 to 30 percent this year due to a roya — a.k.a “leaf rust” — outbreak. That is in line with downward projections that Peruvian agriculture officials first warned about in February.

According to the ICO, Peru ranks ninth in the world in global coffee production, last year exporting some $3.5 million bags. The government has issued states of emergency in 11 of the country’s coffee growing regions, including  Cusco, Junin and San Martin. Von Hesse told reporters that the government is working with farmers to replace damaged crops.

(Von Hesse) said the government has sent experts into the fields to determine how much can be saved and how to make the crops more resistant without losing their quality.

“This is an opportunity to promote changes in the plantations,” he said.

Earlier this year, the National Coffee Chamber said it expects Peru will produce 6.0 million quintals, or 46-kilo bags, of coffee this year. It originally projected output of 7.5 million quintals.