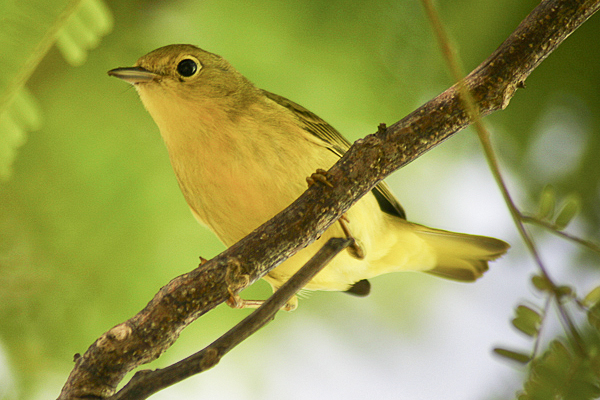 The yellow warbler is a borer-eating bird that frequents coffee plantations. Photo by Brian Karp.

Biologists at Stanford have for the first time put a monetary value on the pest-control benefits of birds on coffee farms. While the research was localized to a Costa Rican farm, it may help shed some light for coffee producers worldwide on how to mitigate borer beetle infestations through better land management.

The Stanford biologists noted a direct correlation between leaving some land in its natural state  and the number of birds that return, many species of which feed on the coffee borers. The closer a patch of unfarmed land with trees is to the crops, the less infestation. The research team even discovered that a small stand of trees in farm land can be more productive in naturally fighting off beetles than large swaths of natural land that may be on the periphery.

“The benefits that we might get are huge,” said Daniel Karp, a graduate student in biology and lead author of the study, published last month in Ecology Letters. “There’s lots of unrealized value in these small patches of rainforest. This looks like a sustainable, win-win opportunity for pest management.”

Stanford biologists have been studying coffee farms in Costa Rica since the 1990s, but the research has recently focused more on problems caused by the borer beetle, which burrows its way through the coffee cherry and back out, destroying it. The beetle was first found on Costa Rican coffee crops in 2010.

“We had the not-so-glamorous task of collecting the birds’ poop, and then taking it back to Stanford and looking through the DNA within it to learn which birds were the pest preventers,” Karp said.

The team said five species of birds contributed to cutting infestation rates in half, and the birds were more abundant on farms featuring more forests.

Said Karp, “Depending on the season, the birds provide $75 to $310 increases in yield per hectare of farmland.”

Interesting article and interesting topic. The coffee industry needs to move further in identifying manners to promote environmental sustainability and biodiversity conservation. One line of work is to recognize, evaluate, and preserve the services provided by birds in particular, and by biodiversity in general.

Much research needs to be conducted. Even on the topic studied by Daniel Karp. For example, At what levels of infestation do birds have a significant impact on pest control? How to integrate the pest predation by birds with the rest of control practices?

This type of research must be valued and supported. Congratulations to Daniel Karp.