A London-based foodservice research group has broken down the production expenses for cappuccinos at two large chain shops in High Street, and the results may surprise consumers and coffee shop operators alike. 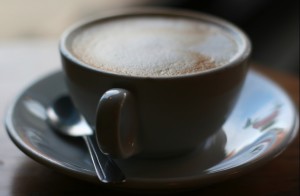 Allegra Group, which boasts some big clients in U.K.’s coffee segment, including Caffe Nero, says in a new report that the cost of a cup, lid, stirrer, napkin and sugar packet in the to-go cappuccinos represents more than double the cost of the epresso beans used. Allegra did not name the two shops that produced the cappuccinos, merely identifying them as chains with stores on London’s busiest retail corridor. The cappuccinos studied contained equal parts espresso, hot milk and frothed milk.

The U.K.’s Mail Online has more from the report:

The cost of the coffee served in a medium-sized £2.20 cappuccino amounts to  a mere 8p. But the packaging and extras – including the cup, lid,  stirrer, napkin and sugar – cost 16p to produce.

Staff wages make up the biggest portion of the drink’s total price, with nearly a quarter of the £2.20 used to pay baristas.

The Government receives the second-largest share, taking an average of 37p from each drink in VAT.

The report further broke down the per-unit net gain for the coffee chains:

the milk used typically costs 8p. Another 15 per cent of the total price is used to pay for rent and associated costs such as business rates, with a further 15 per cent going towards administration.

After all these payments are deducted, the coffee shops are left with around 13 per cent of the price paid for the drink as profit.