Colombian ambassador to South Korea Jaime Cabal recently told Colombian news service EFE that the Juan Valdez Cafe company plans to open some 300 to 400 stores in Asia over the next five years, choosing Seoul as the first market to introduce the brand. 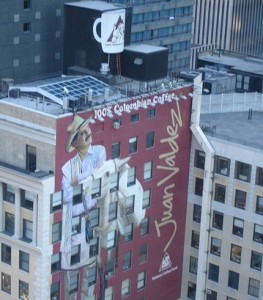 The coffee shop chain was created by the National Federation of Coffee Growers of Colombia/Federación Nacional de Cafeteros de Colombia (FNC) in 2002 to try to expand the concept of a national coffee brand and elevate awareness of Colombian coffees. It has since grown to more than 240 coffee shops, largely concentrated in Colombia.

The first South Korean store is expected to open in February 2014, and this may be only the beginning of a much larger expansion for the Juan Valdez brand throughout several of the world’s emerging coffee retail markets, as company officials have also announced plans for the Middle East, Malaysia and Central America.

Conceptually, the Juan Valdez-brand retail concept is an answer to Starbucks, which has recently announced its intentions to challenge the brand on its home turf of Colombia, where the Valdez brand has had a dominant share of the market.