These Humanoid Robot Baristas Want to Be Your ‘Partner’ 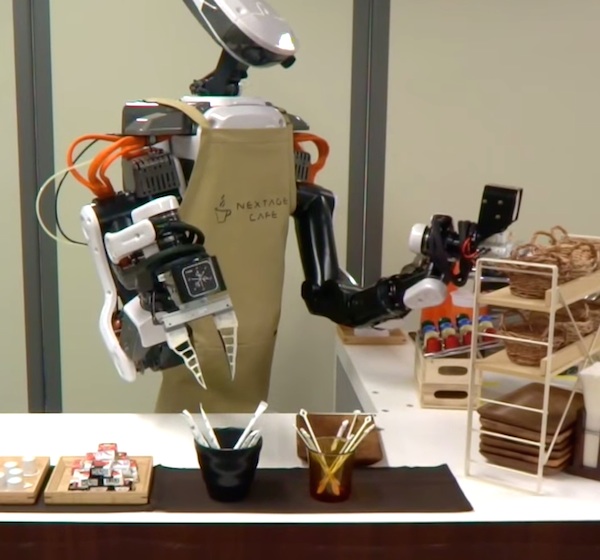 Nextage the coffee-making robot angling for your job.

Remember in the 1980s when humanoid robots were going to take all our jobs, and perhaps even stage a full-scale cybernetic revolt? The future of the 80s is now, and it turns out robotics development has been slower to develop than anticipated, sparing all our jobs and delaying the inevitable machine rule over humans.

Case in point, today there is a robot called Newage making coffee for visitors to Japan Robot Week. Impressive enough in its human movements to be creepy, Newage is painfully slow in preparing drinks using a Nespresso capsule system. So, baristas, you are safe… for now:

To be fair, Newage’s creator, Kawada Industries, has an impressive history of bridge and structure building, providing the technological and industrial muscle behind some of the country’s most labyrinthine projects. Coffee is not their priority.

(related: Could Google’s April Fools Joke Be a Creepy Look Into Coffee’s Future?)

But, if you’re particularly paranoid about the cybernetic takeover, Kawada’s description of its Nextage platform is going to leave an eerie ring:

NEXTAGE liberates human beings from menial repetitive labor, allowing us to focus on areas that require creativity and generate added value, such as process management and improvement activities.NEXTAGE coexists with human beings, at the same time it collaborates with conventional industrial robots and specialized equipment. Industrial robots are now in the next phase of their evolution, from mere “equipment” to becoming a “partner.”

I really don’t get the Japanese robotics industry. For over a decade it has acted like the ultimate Turing test is whether a robot can serve you coffee or not. You will find references to robotics fairs where they do just this, year after year after year.