The Pancake Epidemic, a division of the self-described “experiential marketing firm” Street Virus, based in Los Angeles, has been real busy in Seoul, opening up multiple Stumptown-focused shops and associating itself with numerous other American lifestyle and fashion brands.

The big opening was in September with a PE-branded flagship shop, its first, in the Gangam District above Stussy’s Seoul headquarters. PE followed that by opening a pop-up in the Hyundai Coex department store, and a week later it opened a kiosk at the Hyundai Apgujeong department store. 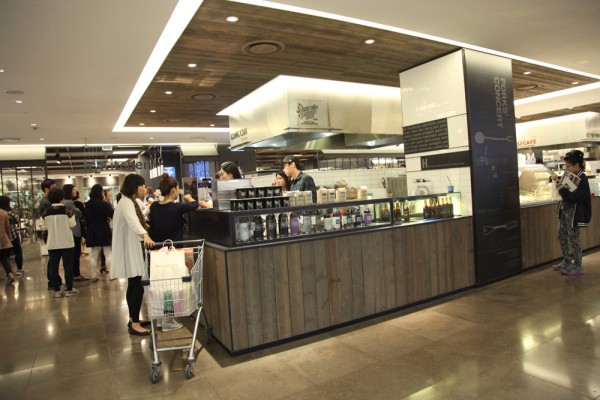 The PE kiosk at the Hyundai Apgujeong branch.

PE is leveraging the growing international cachet of the Stumptown Coffee Roasters brand, and the group says its shops are the first in Korea to exclusively serve coffees from the Portland-based roaster. PE and Stumptown have had an ongoing relationship through an invite-only cafe at PE’s L.A. headquarters that acts as a meeting and social space for the agency and its clients.

While PE’s Brandon Davenport and co-founder Derren Romanelli traveled to Seoul to oversee the openings, the group’s Korean buid-outs and operations have been led by a man they identify as Mr. Lee, the owner of Kasina, a retail clothing and accessories shop that has strong ties to American shoe and street apparel brands.

Here Davenport leads a video tour of the PE flagship shop in the days leading up to the opening, and he and Romanelli visit a small handfull of Seoul’s cutting edge retail bars, which are growing in numbers by the day: