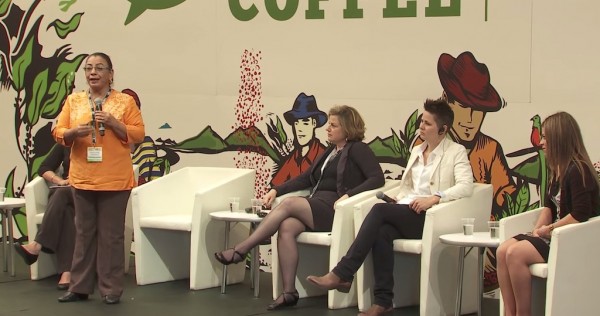 It is not by chance or some sort of collective awakening of consciousness that many people working in the coffee industry have renewed or expanded their foci on gender dynamics.

2015 is a very unique year to talk about gender. In 2006-2007, organizations like the United Nations Food and Agriculture Organization, USAID — they decided that by 2015, all the programs, all the initiatives, all the projects have to include gender policies. So this is the year.

Gomez was moderating a roundtable that included a group of panelists who know a thing or two about leadership roles of women in coffee first-hand:

The roundtable, titled “The Changing Gender Dynamics of Coffee,” was led by Sustainable Harvest as part of its Let’s Talk Relationship Coffee” event earlier this month in Melbourne, which was held in conjunction with the Melbourne International Coffee Expo 2015. The group describes the roundtable as “one of the first-ever international forums joining women coffee buyers and coffee producers on stage to discuss gender equity.”

The video is unfortunately short, but it nonetheless highlights some of the pressing gender issues faced by each of these women individually, while underscoring the sheer range of gender inequality issues currently at play in the industry from the farm level through to the retail level. If nothing else, it is a welcome addition to a conversation we expect is only now beginning to take off.

Other videos from the event, including a session on milk in Australia and a look at contemporary Australian coffee culture, are available here.