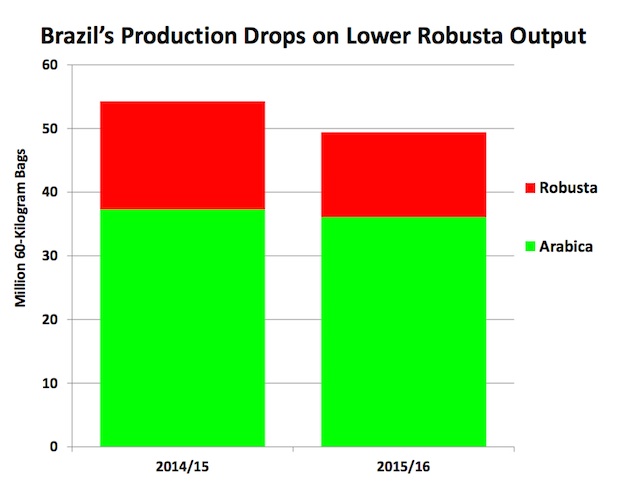 In its biannual report on world coffee supply released last week, the USDA is predicting increased production levels in several of the world’s key growing regions that will offset an anticipated shortfall from the world’s largest producing country, Brazil.

In total, the USDA expects the 2015/16 crop season to result in a relatively modest 600,000 bags over the previous year, to 150.1 million bags produced globally. The USDA report predicts a robusta decline of 3.7 percent to 3.7 million bags in Brazil, where Arabica output is also predicted to decline by 1.2 million bags to 36.1 million.

In the world’s two largest consuming regions — the European Union and the United States — these projected declines are significant in that Brazil accounts for at least 30 percent of coffee imports in each. However, the USDA is predicting record-high outputs in Indonesia and Honduras, as well as a Robusta recovery in Vietnam, which helps offset the Brazilian shortfall.

Here are some key predictions from the USDA’s December report, which annually follows a June report with new predictions and revisions.

For more information, visit this USDA resource page and scroll down to the “coffee” report.