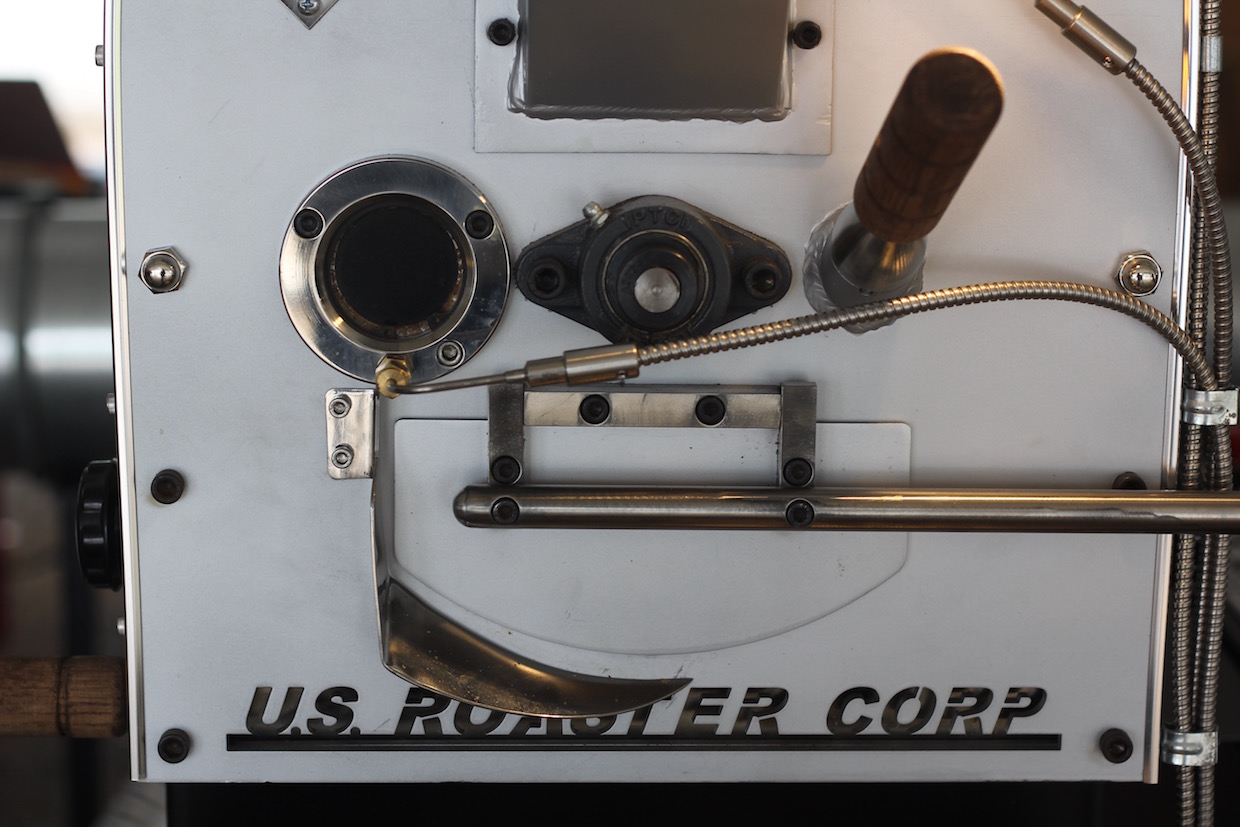 The Mini Rev, as it is called, offers the same dual heating methods as its bigger predecessors: Convection from heated, recirculated air as well as direct heat applied to a solid metal drum. The machine can be run either on gas or electric, and requires no afterburner, as an in-line catalytic converter continually cleans the air as it circulates. The company states that the energy consumption, either on gas or electricity, is very low, which when coupled with its ventless design, makes it an especially Earth-friendly option. 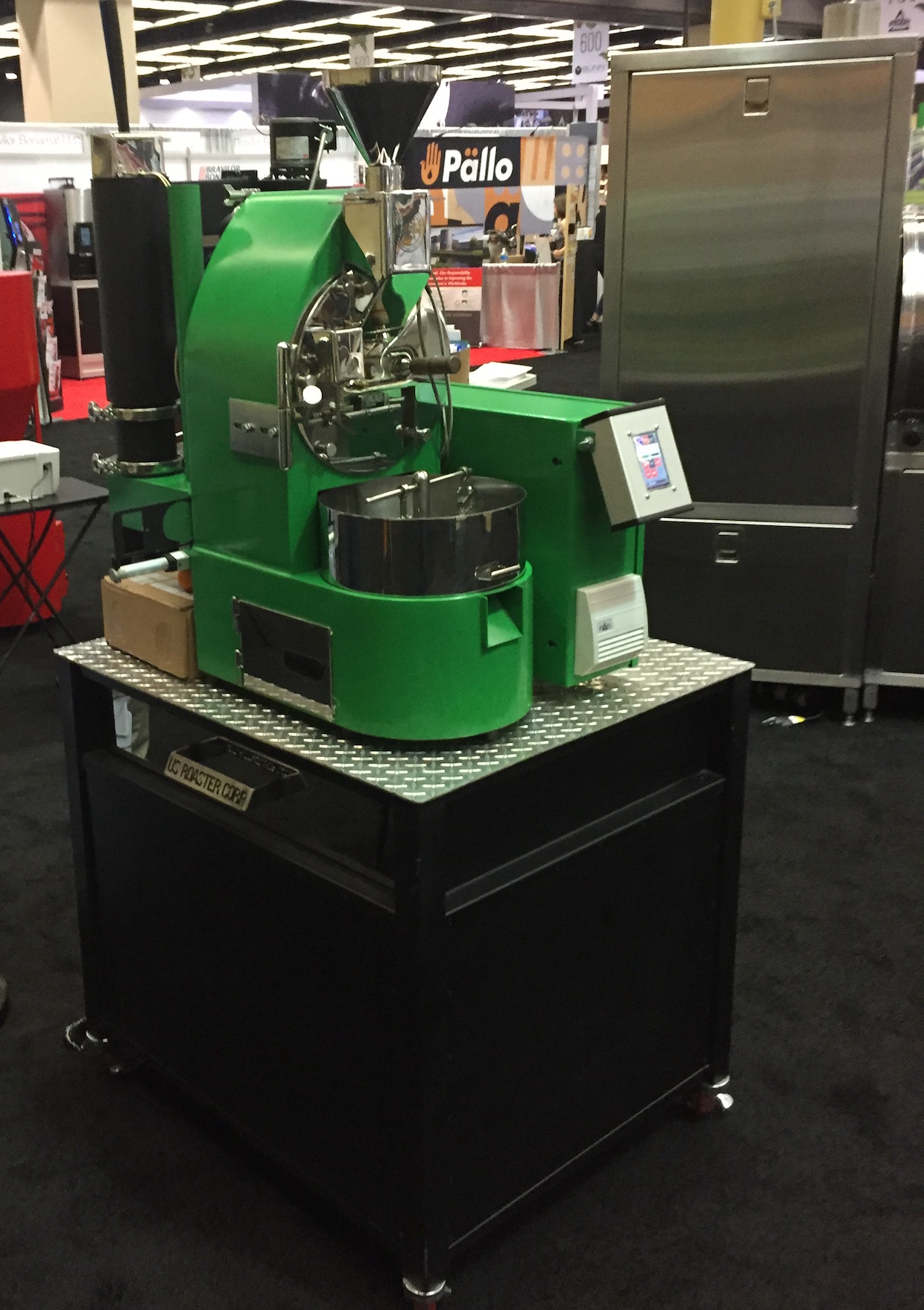 The USRC Mini Rev. Photo courtesy of US Roaster Corp.

The compact new machine also offers a variety of special features aimed at enhancing its usability by inexperienced café owners and workers in the coffeehouse environment. Apart from that its user-controllable single fan and servo motor are very quiet according to the company, it also features some advanced programmability options, including a cloud service of sharable and downloadable roast profiles as well as fully automatic roast conclusion functions that end the roast, open the drum door, discharge the load and begin stirring the hot beans in the attached cooling tray.

“It’s so quiet, you don’t even hear it run. You hear beans cracking,” USRC President Dan Jolliff told Daily Coffee News of the machine he said can handle back-to-back roasts without issue, and requires no quenching with water in the cooling process. Jolliff noted that both the cyclone and the catalytic converter contain sensors to alert users to when cleaning is needed, and are designed for ease of maintenance when those times come.

Its compatibility and convenience for use in busy and public environments has been put to the test over the course of several trade shows at which the company has displayed it.

“For about six or seven months we’ve been taking it to Coffee Fests and there’s been no problem at all, never a single complaint, and since it’s only about 20 amps of power, it’s the same power level as most commercial toasters,” said Jolliff. “No fire marshal problems or anything like that.”

The online component of the Mini Rev system is still in development, which is why the product has only “soft” launched to this point. The machine is currently for sale, though the cloud server and platform for uploading, storing and sharing roast profiles is being designed entirely in-house by USRC’s own engineering team in collaboration with some engineering masters degree students whose availability increases in the summer when school is out. Jolliff said he anticipates the cloud component to be ready for the public this summer. 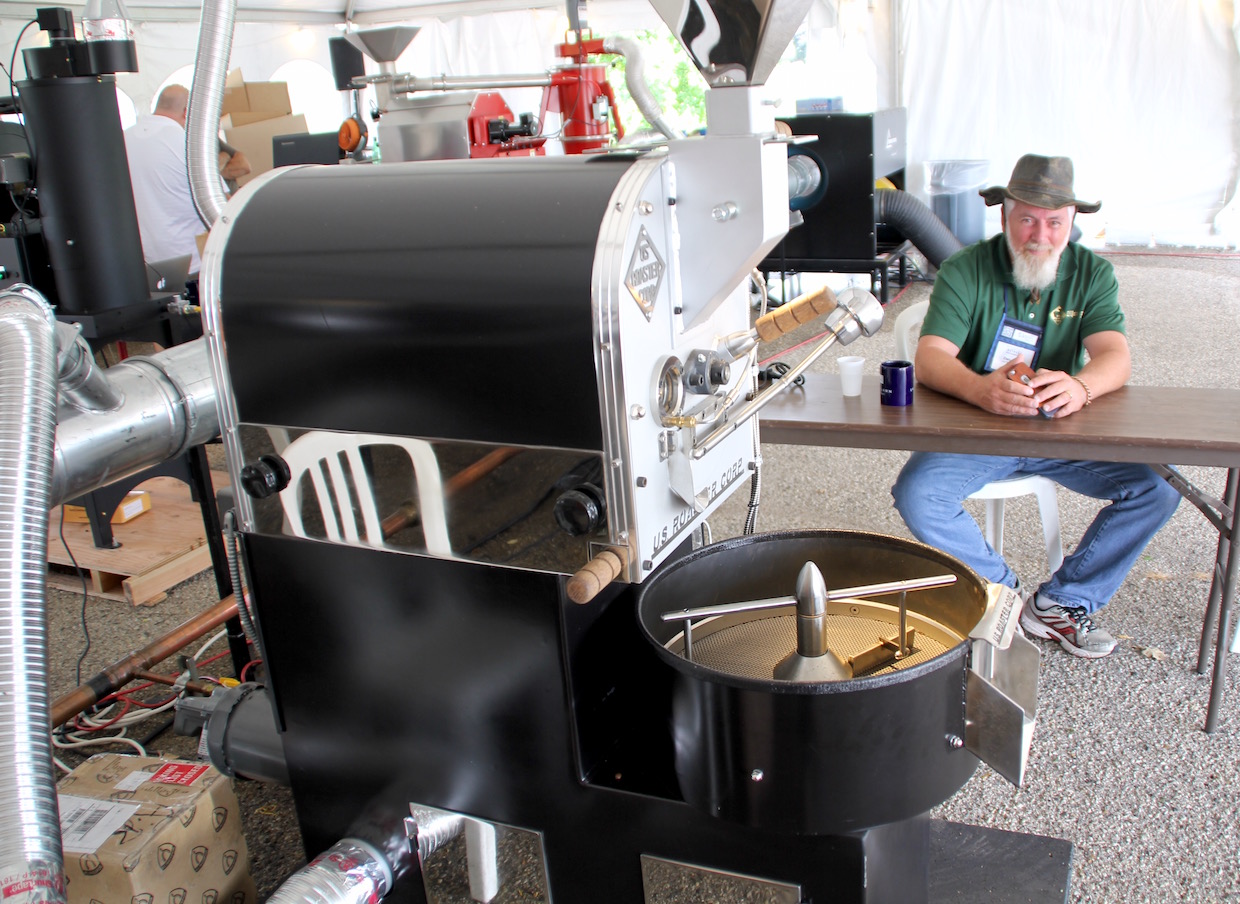 Additionally, Jolliff said that to support roasters just getting into the craft, USRC will be selling small quantities of green coffees directly to roasters, with optimal roast profiles stored in the cloud. Jolliff said there’s plenty of space in USRC’s 120,000-square-foot manufacturing facility for green coffee storage, while the curation and profiling of high-quality coffees will be handled by deeply experienced, well-known figures from the specialty coffee community.

Three such pros — Paul Thornton, Robert Hensley, and a third that Jolliff kept under wraps for the time being — are already on board for the initial rollout of the green coffee service. Said Jolliff, “Everybody knows who they are, everybody loves them, they’re very hardworking people, and they’re going to come up with the blends and stuff, and the recommendations for profiles for the Mini Rev.”

There’s no contract or commitment between Mini Rev owners and the green coffee service.

“We’ll have small portions to help people get on their feet, because that’s the whole idea,” said Jolliff. “You can download the recipe from the cloud; master roasters already done the work. Then whenever you’re ready, go buy your own bag of coffee from whoever, and roast your own.”

Jolliff said that in the coming years USRC will be upgrading its existing production line while building out an entirely new assembly line in their Oklahoma plant dedicated to the new smaller roaster, as all their machines are built entirely in-house.

In the meantime USRC’s engineers are currently developing a prototype of another, even smaller machine, the Micro Rev 3000, an internet-connected single-pound roaster for home users. Further down the line there’s also soon to come another machine that falls somewhere in the middle, a “smokeless, fully adjustable” fluid-bed machine that roasts from half a pound up to five pounds. 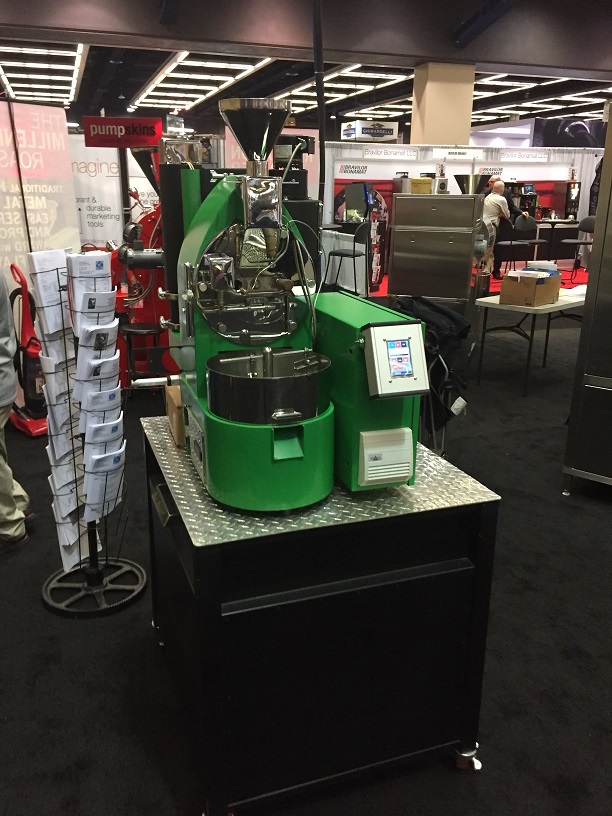 Photo courtesy of US Roaster Corp.

“We don’t think the air roaster is dead here at US Roaster Corp. We’re very open-minded,” said Jolliff, noting that his company started over 30 years ago with a focus on rebuilding fluid-bed machines. Jolliff contends that roughly 85-90 percent of the flavor of roasted coffee is imbued through the air, and that will finely-tuned controls and materials, a hot-air-based roaster can gets results equal or superior to that of a traditional drum roaster.

In pursuit of all these new technologies and products, Jolliff added that the USRC R&D budget has been expanding rapidly as well.

“Our R&D budget here has gone from $100,000 to probably half a million a year and it’s going up drastically,” Jolliff said. “It might be a million next year. That’s where all the profits are going. I don’t need a new car. I’m having too much fun.”