Perspectives on the New SCA Report On Farm Profitability 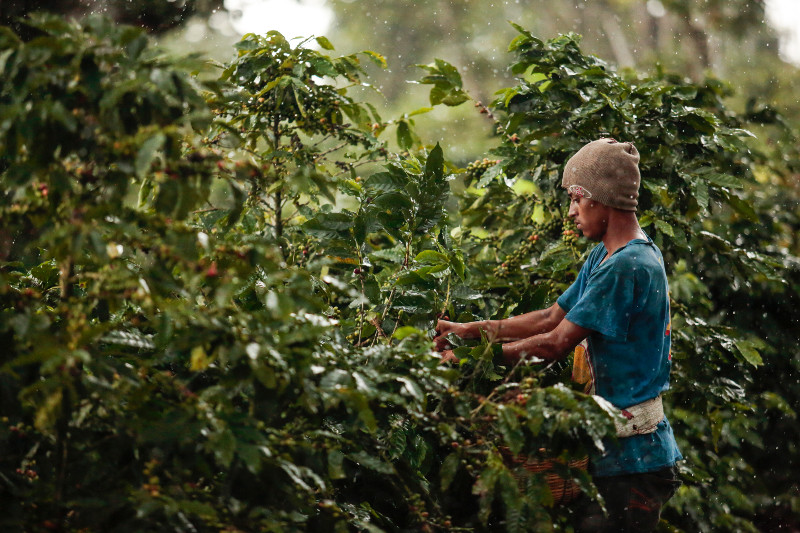 The authors conducted a meta-analysis of reliable cost of production data available to them. Shockingly, they only found nine studies and publications from around the world that they considered usable. For an industry built on 22 million farmers, this tells us that there is very little publicly available data on farm costs and profitability. The main — and surprising — conclusion from the authors of the study is that farm yield is not correlated to farm income. On the surface, this seems to be a somewhat paradoxical conclusion. Why wouldn’t higher production lead to more income?

Let’s take a quick look at how to calculate net income. The simplest version is (yield x price) – (cost of production) = net income. In practice, this is much more complex, as there are multiple sales, prices and several fixed and variable costs that are involved in cost of production.

For the purposes of our discussion, let’s focus on the basics. The first two variables of this equation, yield and price, often come under the most scrutiny, yet we often forget that the three variables in the equation have a correlation. The key finding of the report states, “Increasing yield typically increases the cost per hectare to produce coffee, especially in the short term, and hence may decrease a farm’s profitability.” In other words, producing more coffee is expensive, costly and cuts into a farmer’s margins.

This seems like it follows a basic economic theory – the law of diminishing marginal returns.

This economic theory states that the when you attempt to increase production, the incremental output of each input decreases. In other words, if you spend $100 on fertilizers, for each subsequent $100 that you spend, you would not get the same increase in output that you got on the initial $100.

To get a better understanding of how commercial farms balance the issue of yields and profitability, I talked to someone who knows and manages this dynamic on a daily basis. Gustavo Cerna is the supply chain director of MACERCAFE, a family business in Nicaragua that currently operates 10 farms, each about 200 hectares in size.

I shared with Cerna the findings of the SCA report and asked him what he felt about the negative relationship between productivity and net income. Cerna enthusiastically agreed with the findings, since it mimics an approach that they have on their farms.

“We try to go for a medium level of productivity – trying to produce about 25 to 30 quintales per manzana (3500 to 4200 pounds per hectare of green coffee),” Cerna said. “That’s the sweet spot. We’ve tried producing 40-50 quintales and it’s just too expensive and we are exposed to too much risk.” (Note: A manzana is a Central American unit of area equivalent to approximately 0.70 of a hectare. Quintales are 100-pound units. A quintal is abbreviated here as QQ.)

In other words, in many cases, it is very expensive and highly risky to be a highly productive farmer. Cerna is referring to the increased cost of production that increased productivity requires. Higher productivity requires some combination of the following management: higher plant densities, increased quantities and number of applications of fertilizers, and higher frequencies of renovation. You also need access to labor, as more person days are needed to apply these management techniques and more hands are required to harvest the coffee. Ultimately, MACERCAFE’s economic analysis has shown them that the key to their profitability is to maximize efficiency, not yield. This is right in line with the findings of the SCA report.

Cerna laid out the economic analysis in more black-and-white terms. “We need a margin of about $50/QQ — that’s the goal,” he said. “That’s not our net profit, but that margin covers our long-term loans, depreciation and provides us with some profit. “

If we look at that on a per-area basis, with $50 net profit per QQ with an average productivity of 35 QQ per hectare, that’s a profit margin of $1,785/hectare. At Macercafe’s average cost of production of $1.10 to $1.20, a $0.50 profit per pound puts a target price at $1.60 to $1.80. These are prices that, while still above the current global price of coffee, are still within reach. The Technoserve study cited in the SCA article put the cost of production at $1.66, which means that these farmers would need a price of $2.16 to reach Macercafe’s $0.50 margin.

Cerna and Macercafe have the ability to analyze their costs and income, arriving at an understanding of how to maximize their economic efficiency. So, what can a small farmer learn from this? What are the keys for producing in an efficient manner? I posed this question to Cerna and he had these ideas:

Gustavo Cerna: “A farm needs to understand what their fixed costs are and how to maximize the productivity from these. These costs don’t necessarily contribute to the farm’s productivity, but the (fixed) costs add up.”

The SCA report said that fixed costs for farmers are nearly zero, but this is an oversimplification of the issue. Household expenses could be considered as fixed costs, as they are necessary for the farm to function. And as the report mentioned, the depreciation of trees needs to be included in these fixed costs.

Gustavo Cerna: “It’s too expensive to produce a lot of coffee. You may generate a lot of cash flow with higher yields, but your costs will increase and you’ll have a lot of cash coming out. It also puts you at risk for the next disaster — coffee leaf rust, the weather, a bad crop year. You’ll have the costs, but none of the income.”

Gustavo Cerna: “A smaller farmer has a greater level of control than on a larger farm on all aspects — the productivity of labor, quality control. This is an advantage they should try to maximize.”

Small farmers often lack access to capital in order to make investments into productivity. They don’t have the ability to absorb the initial decrease in profitability needed to have higher yields later on. Small farmers are often looking for the highest margins possible, which means they may invest less in the farm — or not invest at all.

This is an uncomfortable answer for the coffee sector, especially when we consider the future needs of coffee consumers and the 22 million farming families involved in coffee production globally. Given this situation, we need to reframe the narrative and think about farmer return on investment rather than absolute increases in productivity.

In the report, the authors criticized the promotion of “Good Agricultural Practices” because while they may increase yields, they may not necessarily improve profitability. Therefore, the question we must be asking is, “What practices provide the biggest ROI?”

It is our job to ensure that we measure the returns not only in purely economic terms, but also considering natural resources and social aspects. Coffee farmers produce more than just a commodity that is the driver of an industry that contributes 1.6 percent of the GDP of the United States. They produce drinking water for local communities; they are sequestering carbon (unfortunately at rates slower than humans produce it); and they are providing jobs to locals and migrants in need of cash for work.

We need to find ways to value all of these contributions in order to fully compensate coffee farmers.

Great article! Gustavo Cerna’s answers show the importance for producers to develop a long-term vision instead of getting fixated on immediate gains.

THis reveals an issue related to the health of ANY business venture, that of gathering the most critical data and somehow USING it to evaluate profitability over time. Perhaps this is one “service” visiting coffee professionals could help with as we spend time at origin. Help these folks understand the importance of, and how to, perform these simple calculations. Without them you are trying to fly blind. Maybe you’ll make it, but at times the pilot cannot see that mountainside he is approaching until…….

As to the issue of “carbon sequestering”.. plants NEED carbon dioxide to grow. Perhas the warmists/changists have deceived us into thinking that carbon dioxide is a pollutant rather than a plant food. Research proves that as CO2 levels increase, plant growth and yield also incrasses, to a point. Check into indoor controlled atmosphere grow operations. Their findings put the lie to the need for carbon sequestering.

First of all, I acknowledge the effort made from the SCA to look with a global approach a theme that is global – coffee value chain. First findings – not enough studies – shows opportunities for further research. As such example, it is also necessary to change our basic paradigm at the basic level of the value chain. Not anymore good practices, etc., etc. at the growing segment. It is required a “global” approach supported in three columns: a) a systemic approach; b) a precision intention, and, c) a positive economy.
This article points out to the third column, where, including energy – in a broader sense – must yield a positive result and not only a break-even one.
More needs to be included in research within this sector such as looking a coffee tree from a systemic approach, or at the soil/water/nutrition system, or at the location climate system, etc., etc. In this manner, there will be also the path open for the habit of the second column, precision intention, this being supported by the availability of technology, – soil temperature, moisture, etc., – man-hours invested in the farm – when and how – correlation studies, and the rest.
And, the key issue is to develop knowledge that stays at the growers level in order to empower the sector assuring in this manner its sustainability.

One glaring omission as usual. No mention of why coffee roasting jobs and revenue are denied to developing countries. Here in Colombia 88% of the countries coffee production is exported to be roasted in far richer countries.

The industry deems workers in developing countries only fit to work in fields. It’s a shameful attitude and is about to be exposed in the national press.