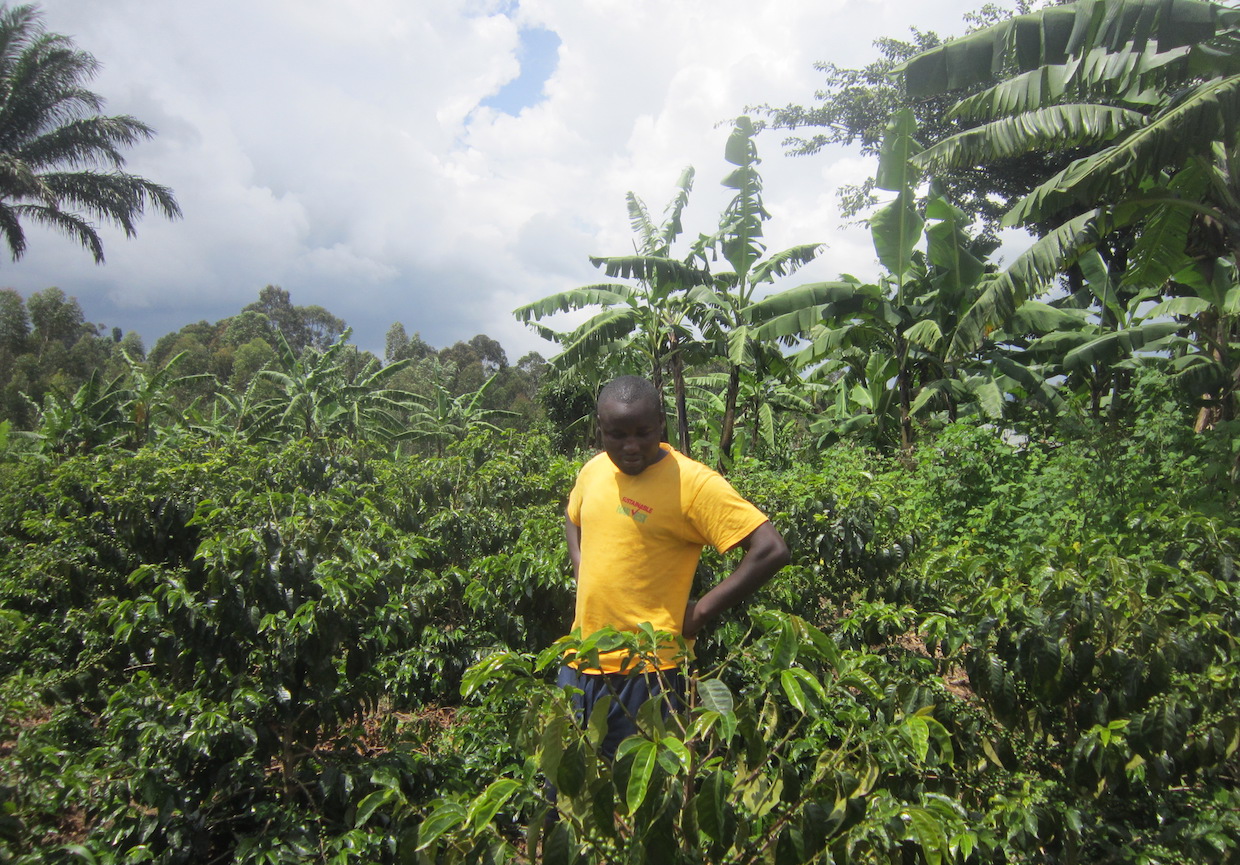 A Ugandan coffee farmer pauses to inspect the young, hybrid Arabica plants in this mixed coffee-banana plantation near the Rwenzori Mountains.

Thanks to an aggressive sector-wide growth strategy, Uganda is positioning itself to be the next Vietnam in terms of global production and exports. While the strategy has been in place for several years, the saliency of the ongoing efforts was made abundantly clear in a field trip to Uganda last month.

Operation Wealth Creation (OWC), is an intervention that H.E. the President Yoweri Kaguta Museveni launched in July 2013 to create a system that facilitates effective national socio-economic transformation with a focus on raising household incomes for poverty eradication and sustainable wealth creation.

The operation is being led by the Ugandan People Defense forces and is using veterans — retired and/or inactive — in the distribution of seedlings to the population, supporting the establishment of nurseries and offering extension services, with military-style concern for meeting delivery priorities and deadlines. The target is to supply 300 million seedlings per year for the next three years to 2020. The operation has drawn in the Ugandan Coffee Development Authority, local governments and the Prime Minister’s Delivery Unit, which was created to bring a culture of rigor and speed in the delivery of public services.

Coffee is a strategic priority for Uganda in that it provides income to subsistence farmers and generates approximately 20 to 30 percent of the country’s foreign exchange on average in recent years. However, production has been increasing very slowly in the last 15 years to remain around three to four million bags. Eighty five percent of Ugandan coffee is produced by smallholder farmers with rudimentary practices; and the average yield is 0.6 tons per hectare, compared to 2.2 tons per hectare in Vietnam.

While Arabica was introduced at the beginning of the 1900’s, Robusta coffee is indigenous to the country, and has been a part of Ugandan life for centuries. The variety of wild Robusta coffee still growing today in Uganda’s rain forests are thought to be some of the rarest examples of naturally occurring coffee trees anywhere in the world. The coffee trees are intercropped with traditional food crops and grown in the shade of banana trees and other shade trees. In these self-sustaining conditions, coffee is left to grow naturally, flowering on average twice a year.

The president has made it clear that all the necessary support will be accorded to achieve the national coffee goals. The government plans to spend $900 million for quality planting materials, access to quality farm inputs, access to finance and facilitating extension services. It is now up to the Ugandan farmers and their associations to seize this opportunity to grow their incomes and play a role in meeting global demand.

The plain fact is, coffee is a cash crop. It is grown by 1.7 million smallholder farmers in Uganda, 1.17 of whom are growing Robusta, while an estimated 2.8 million people rely on it for a living. Most production is Robusta, and the prices they get are low, especially in the current marketplace, yet high-quality Robusta and Arabica have also been prioritized.

While it will take years before many seeds and seedlings turn into fruit-bearing trees, other production-related challenges currently facing Uganda include: low survival rate/mortality of the seedlings; the level of preparedness for the planting season is sometimes wanting; climate change is a real issue in Uganda, and that there might not be much arable land left to expand.

CRS is already on the ground working with coffee farmers in two districts in Central and Southern Uganda, respectively. We’re working with a seasoned coffee development partner as a part of this initiative to eradicate poverty and bring Ugandan coffee to the world.

Michael Kimani
Michael Kimani is a program manager with the CRS Coffeelands program, covering the East and Central Africa regions. He is based in Nairobi, Kenya.

Uganda’s coffee can be on high demand if everything is handled by the government for example monitoring and marketing of coffee like as it was in the past ie Uganda coffee society.