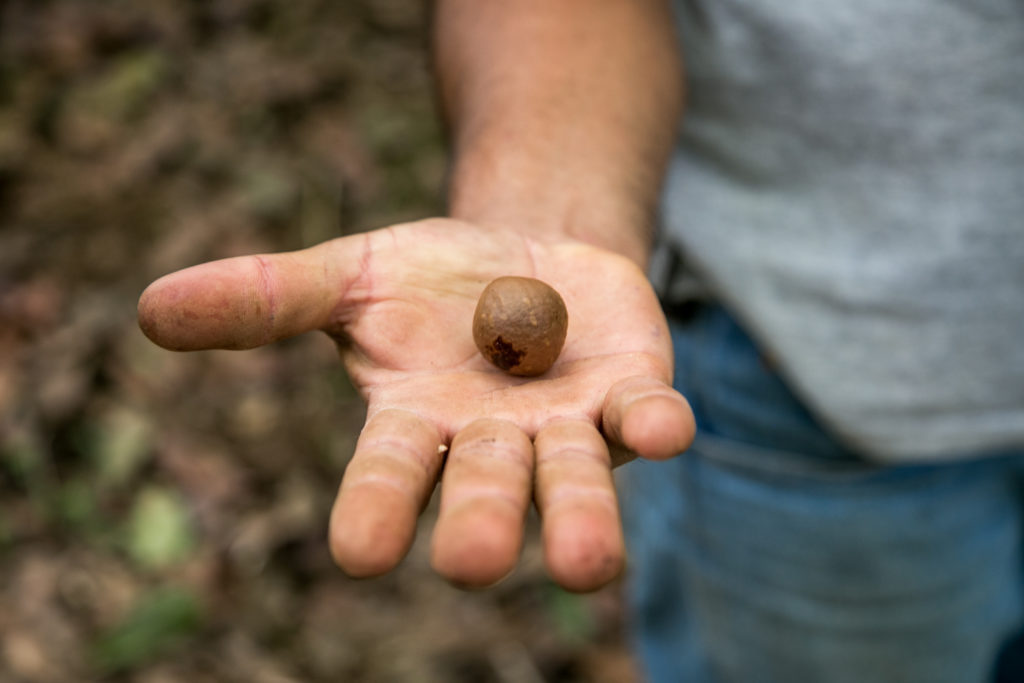 In order to adapt to coffee crops that have been affected by leaf rust, Carlos Cano, 43 has turned to selling macadamia nuts.

To address the drivers of migration — debt/prices and climate pressures — highlighted in the last post, we need to consistently seek a deeper understanding of farmer livelihoods.

To this end, CRS used the Land Equivalency Ratio tool during the last agricultural cycle to analyze the economics of coffee-based agroforestry systems in San Marcos, Guatemala.

Land Equivalency Ratio is a simple tool that allows us to compare the production and/or profit of a monoculture system with a polyculture system. In the case of San Marcos, we used the tool with a sample of farmers to evaluate and compare the relative benefits of a monocrop coffee farm, a monocrop macadamia farm, and a mixed macadamia-coffee system. The results of both rounds of analysis — yield and profit — can be found in this table: 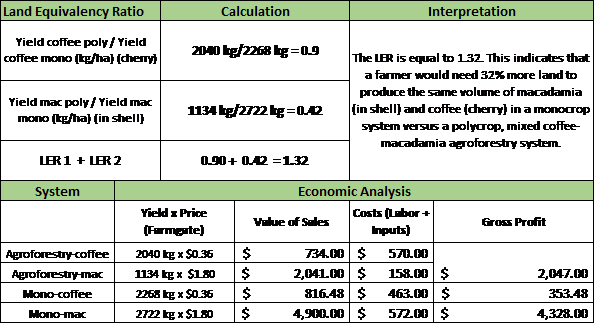 The results of the study indicate that a mixed agroforestry system, which includes coffee and macadamia, is indeed more productive (LER > 1) than either monocrop system. Essentially, you would need 32 percent more land to produce an equivalent volume of coffee (kilos of cherry) and macadamia (kilos of in shell nuts) monocropping than what is currently being produced in the mixed agroforestry systems.

However, things get more complicated if we go beyond yields and look at gross profit. During our second round of analysis we discovered that the monocrop macadamia system is the most profitable of the three systems (gross profit of $4,328.00 per hectare). In fact, the profitability of a hectare of the mixed system ($2,047.00 per hectare) is drug down by the razor thin margins of coffee (higher costs than mac and less income).

Although the coffee production of the participating farmers in this region is marginally profitable — granted, we did not include capital outlays, depreciation, debt servicing in our calculations — they are certainly not generating enough income to think about investing mid- to long-term in their coffee.

One of the younger farmers in our project, Guillermo, recently re-planted one of his smaller plots as a mono-crop macadamia system. Re-planting without coffee allowed him to plant a higher density of grafted macadamia trees, which start producing in 4 years, amidst some scattered shade trees. Guillermo was one of three young farmers in San Marcos who received their Q grade certification last year. During harvest season, he cups several hundred samples for his community. A group of his peers, who pool their savings in a CRS SILC group, purchased some of the best lots to roast and commercialize. So the young man certainly doesn’t lack interest in the coffee trade. Re-planting the former coffee plot with macadamia was simply a business decision.

So, should the rest of the community just clear out the coffee and focus on mac nuts? Well, interestingly, when we shared the data back with focus groups of farmers, they were not surprised that macadamia was “winning” but they were surprised by the gap in profitability between the two crops. Some noted that since the rust outbreak of 2013, they had been integrating more macadamia trees onto their farms, and a few other farmers, like Guillermo, noted that they had begun to dedicate certain blocks of their land just to macadamia and shade.

I think some of the conclusions here are that what we perceive as the lead crop (they are coffee farmers, right?), might not always be the most economically important crop for farmers, and that diversified agroforestry systems — these farms also have banana, citrus, and shade/timber/firewood on them — often mitigate (hide?) coffee’s low profitability. Longer term, it is hard not to think that low profitability, and hence low investment in the coffee, on these farms will not lead to declines in production, outbreaks of pests and disease, and a reduction of land dedicated to coffee.

In the next post in this series, I will juxtapose a few diverse coffee production systems in Mesoamerica where CRS is present. Although they each have their distinctive features, they also have some troubling similarities when you dig into profitability.