Playing with Fire: The History of the Boozy Café Brulot 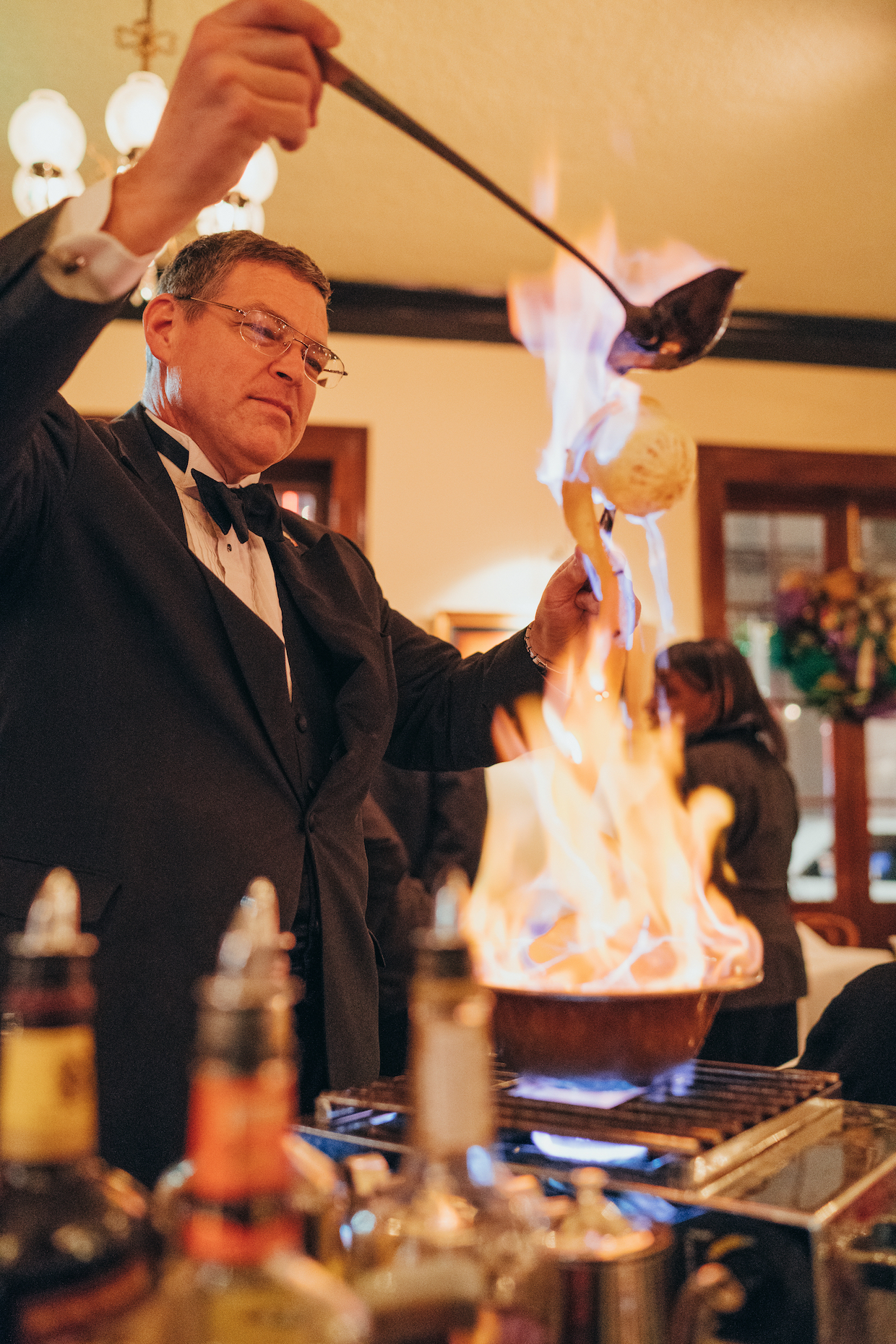 The relationship between coffee and liquor is one that has flourished for centuries. Long before the coffee and booze staple the espresso martini — a creation widely attributed to London bartender Dick Bradsell in 1983 — there was Tia Maria, a dark liqueur made from Jamaican coffee beans with origins dating back to the 1600s.

Decades later came the Irish coffee, a storied combination of hot coffee, Irish whiskey, brown sugar, and fresh cream. Another, lesser known blend of liquor and coffee with an encyclopedic history is the Café Brulot, a coffee cocktail that dates back at least 200 years, boasting French origins and Louisiana swagger.

Café Brulot can currently be found on the drink menus at a handful of New Orleans’ fine-dining staples, including Arnaud’s and Antoine’s Restaurant. The latter serves their Café Brulot Diabolique (spiced hot coffee and brandy) flaming tableside. Prior to becoming an after-dinner drink staple in Nola, Café Brulot was concocted by the French, using cognac-soaked sugar cubes. The cocktail eventually made its way overseas in a feat Keyatta Mincey, ambassador-at-large for Grand Brulot, credits to New Orleans being a port city.

“Essentially, Café Brulot was a coffee cocktail,” Mincey told DCN. “Depending on who you talked to, the men would have their fresh espresso or coffee, and they would take a spoon full of cognac and put a sugar cube in it [and] light it at the bottom, so it melts, and then stir it in there.

Mincey added that the Café Brulot tradition tended to be different for women at a time when women drinking in public was frowned upon. Said Mincey, “So they [would] take the sugar cube, dip it in some cognac, put the sugar cube on their tongue, and then they sip the coffee.”

Upon its arrival in Louisiana, Café Brulot evolved to incorporate more local ingredients. Among those was a chicory-coffee mix, which was and still is served at the famed Café du Monde. Cognac was primarily used, but the affordability of brandy later made it a worthy option for the coffee cocktail. Presently, whether a Café Brulot cocktail is made with cognac or brandy is “up to the bartender’s palate,” according to The Drinking Coach, Tiffanie Barriere. 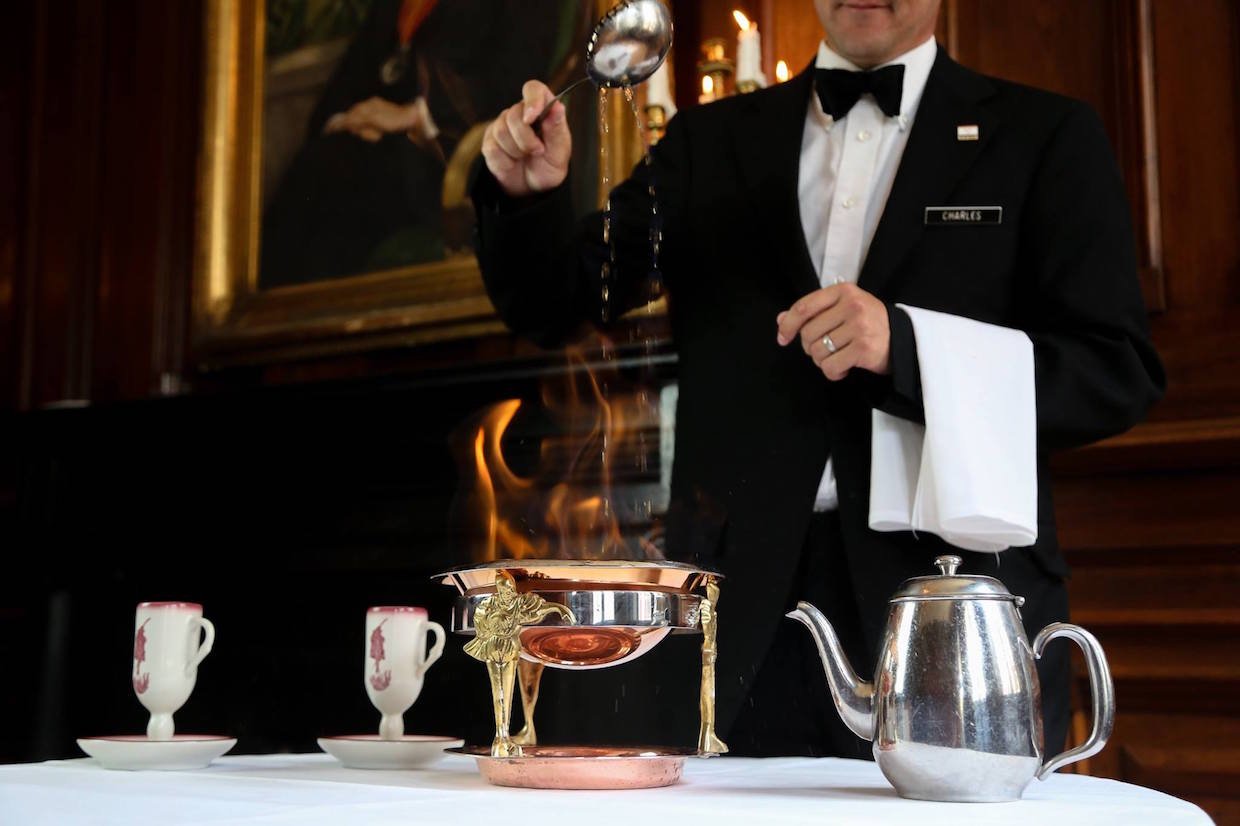 “You have Du Monde, or a chicory coffee — a really affordable, easy-to-get coffee,” Barriere, who was born in Grand Chateau, Louisiana, told DCN. “The coffee beans are coming from the import. You toss some cognac inside, or rye — mainly cognac because the whiskey run was kind of going through it, and to get to Louisiana it took some time, so cognac and liqueurs were major. You’d get your cognac in there, and then you would melt your sugar down using some kind of metal plate or, if you had the tools, you would melt a simple syrup and flame that and toss it on top. It would look like a doily.”

Most Café Brulot recipes also call for some combination of spices such as cinnamon and cloves, along with citrus zest and peel. Orange peel, for example, is used not only to imbue flavor, but to create a boozy spiraling presentation. Given the flames and fanfare that accompany a piping hot helping of Café Brulot, Barriere said it was more typical to find the coffee cocktail at a streetside cafe or bar than it was to find someone making Café Brulot in the comfort of their home.

“In those times, it was a middle-class drink. 1800s everyone’s drinking coffee,” Barriere said. “Everyone’s drinking cognac. Everyone’s drinking. To flame the sugar and drop it in, I think that was only done by bartenders. I honestly don’t think people were doing this at home. This was done at streetside cafes or at a bar. I just don’t see this being a home cocktail.”

With the introduction of Grand Brulot, a newly released spirit from the Tardy family of Cognac, France, the 200-year-old Café Brulot is being granted new life in a new market. The French VSOP Cognac Café, released in 2018, is currently available in three markets: Atlanta, New York, and London. With a market brimming with various coffee liqueurs, Grand Brulot is far from a liqueur, as the 90-proof declaration etched onto the label makes clear.

Grand Brulot, for one, involves a blend of a six-year-aged VSOP cognac with an unaged brandy that has been blended with coffees sourced from Ecuador. “

They blend the two of those things: the VSOP with the Brandy and coffee mix,” said Mincey, who is also cocktail programmer at the consultancy Pictures And Cocktails LLC, said of the Grand Brulot process. “They blend those two beautiful things together and it sits in the barrel for about six months.”

With history constantly repeating itself in cocktail form, it seems a matter of time before drinkers are met with another historic libation that takes its cue from the marriage of coffee and liquor.

Said Barriere, “It’s the best thing about cocktails. Every year something has arrived from back in the day.”