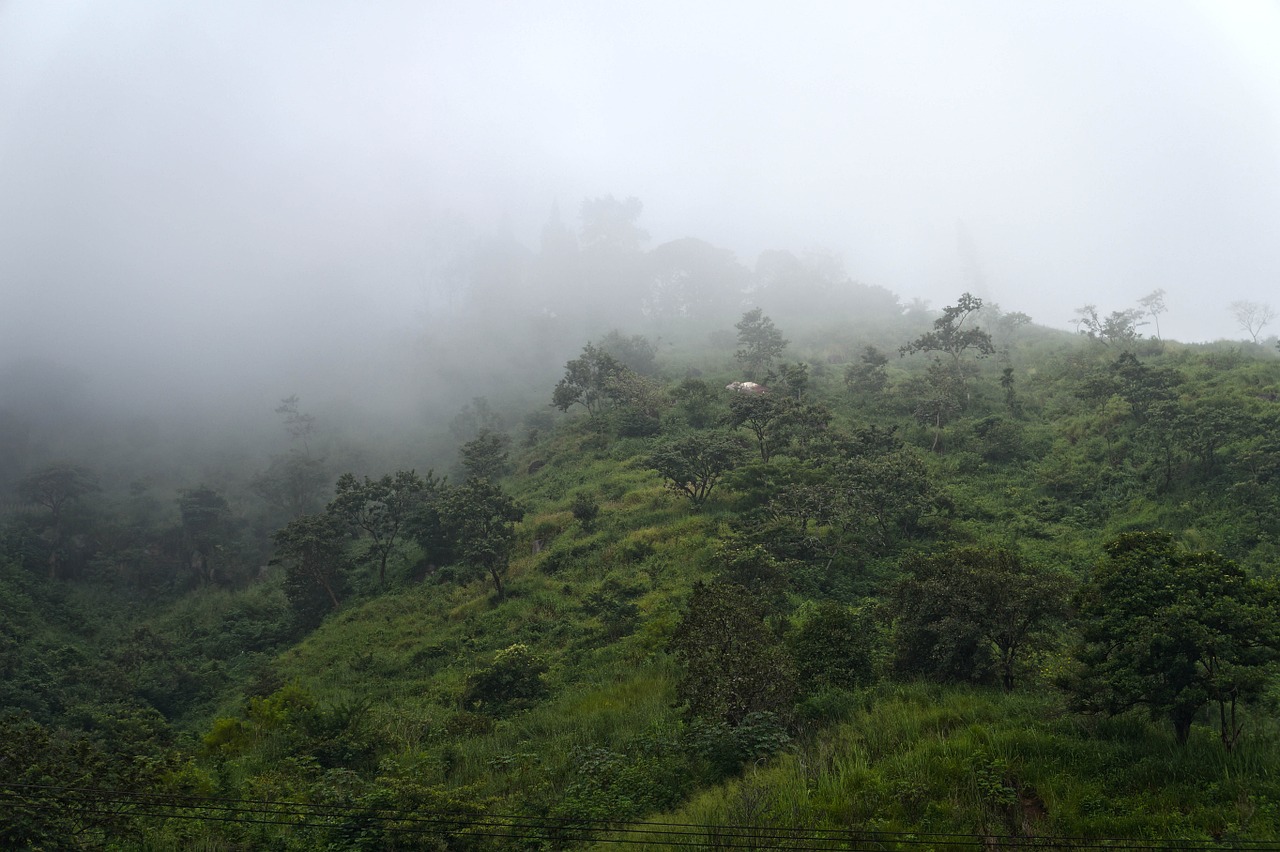 PRI has offered a detailed read and corresponding radio segment on how climate change is worsening the plight of coffee farmers in El Salvador while contributing to more people migrating in search of a better life:

Coffee exports, once the backbone of El Salvador’s economy, have fallen by more than half in the last 10 years, according to the Salvadoran Coffee Council. And as production has plummeted, work has dried up. El Salvador’s coffee industry has lost more than 80,000 jobs over the same period, contributing to the wave of migration north.

Nearly 20% of the population of this tiny Central American country now lives in the US. 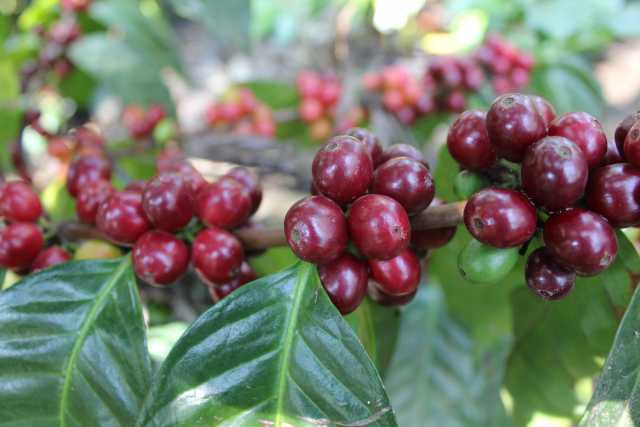 When temperatures dropped suddenly and unexpectedly on an experimental coffee breeding ground in Laos in 2017, only a small handful of varieties survived. One of those was the F1 hybrid called Centroamericano. In a piece this week by MIT Technology Review, scientists discuss the reasons why these in particular show such promising resilience:

So why did the hybrids survive? When parents contribute very different genes to an offspring, as in their case, the resulting organism possesses what scientists call “hybrid vigor.” “It’s a widely known effect in other areas, but no one had studied it in coffee,” says Benoît Bertrand, a researcher for the French Agricultural Research Centre for International Development and a leading authority on coffee breeding. Although the concept is often used in maize production and is fairly common in poultry and rice, it was Bertrand’s team that initially applied it to coffee in the 1990s, creating Centroamericano and a handful of other hybrids.

In quirkier beverage-related science, Amano Enzyme issued an announcement of several new enzymes it said can improve quality and efficiency in coffee and tea beverage making: 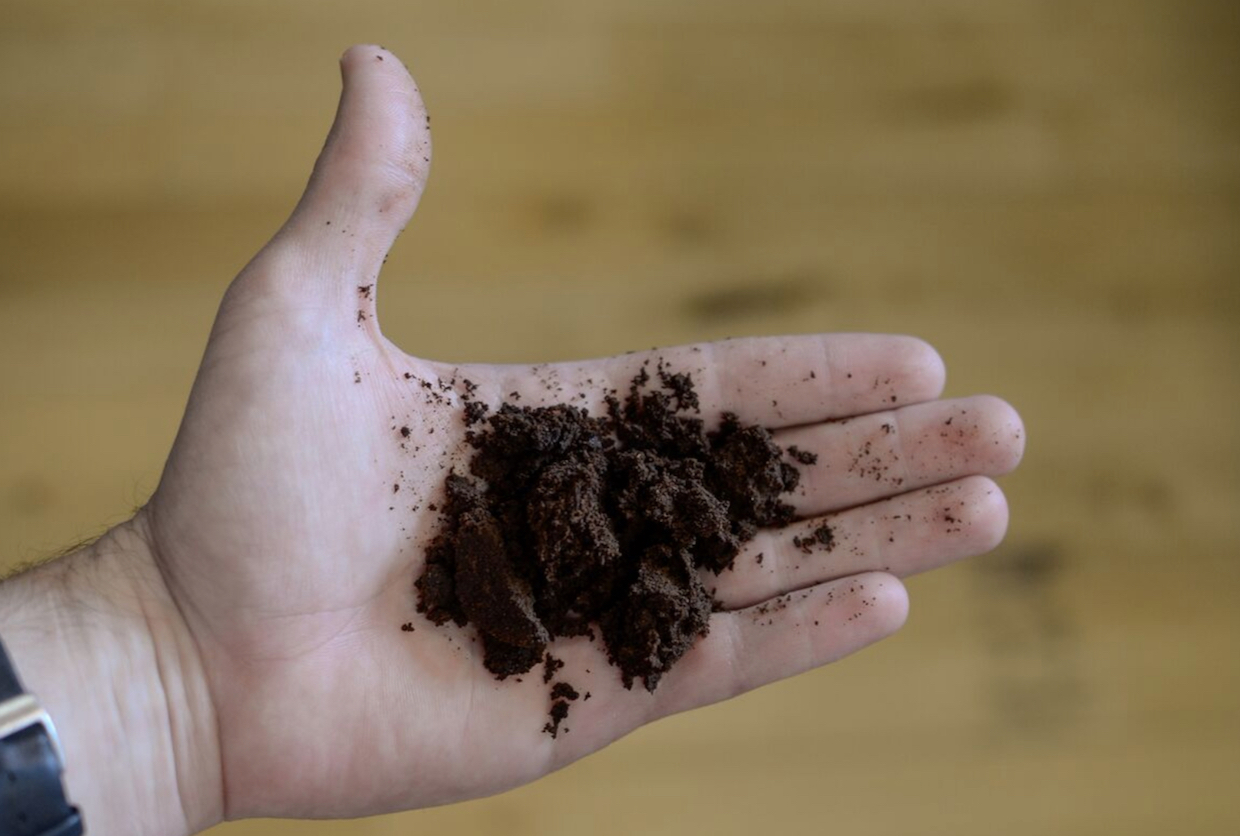 Across the pond, the latest in coffee waste stream diversion comes from a Scottish company led by Scott Kennedy and Fergus Moore. BBC News reported that Revive Eco is extracting useful oil from spent grinds to apply specifically in place of environmentally irresponsible palm oil:

Explaining the idea behind his Revive Eco company, Mr Moore said: “There are oils in coffee with a wide range of uses in different industries – cosmetics pharmaceuticals, food and drink, household products – you name it, there’s probably a use there.

“We’re developing a process to extract and purify these oils.”

Mr Moore added: “The most exciting part for us is that they have all the same components as palm.

“Palm oil’s in the news for all the wrong reasons. It’s really exciting for us that we could potentially provide a local and more sustainable alternative to all the industries that are currently using palm oil.” 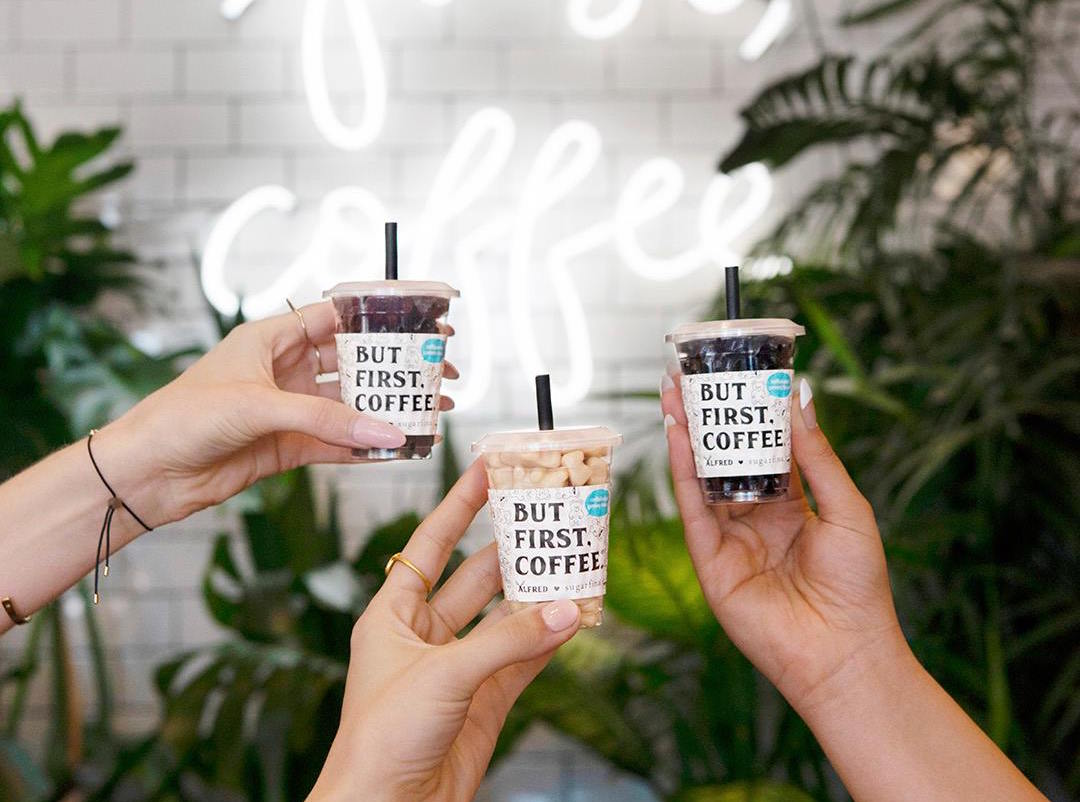 The internet went collectively agog this week for a new kind of edible coffee: the cold brew gummy bear. The collaboration betweenLos Angeles-based Alfred Coffee and candy-for-grown-ups-maker Sugarfina offers gummies with 60 milligrams of caffeine per sweet, chewy serving and comes in various flavors and packaging, including a cold-brew-like plastic cup or bean-style 12-ounce retail coffee bag. Per a press release:

“At Alfred, we always pride ourselves on constantly innovating and staying ahead of both design and beverage trends,” said Josh Zad, founder and CEO of LA-based Alfred Coffee. “So when the opportunity arose to collaborate with our hands-down favorite candy company to deliver everyday Alfred classics in a never-before-seen gummy form it was a no brainer. This is a match made in caffeine-obsessed heaven!” 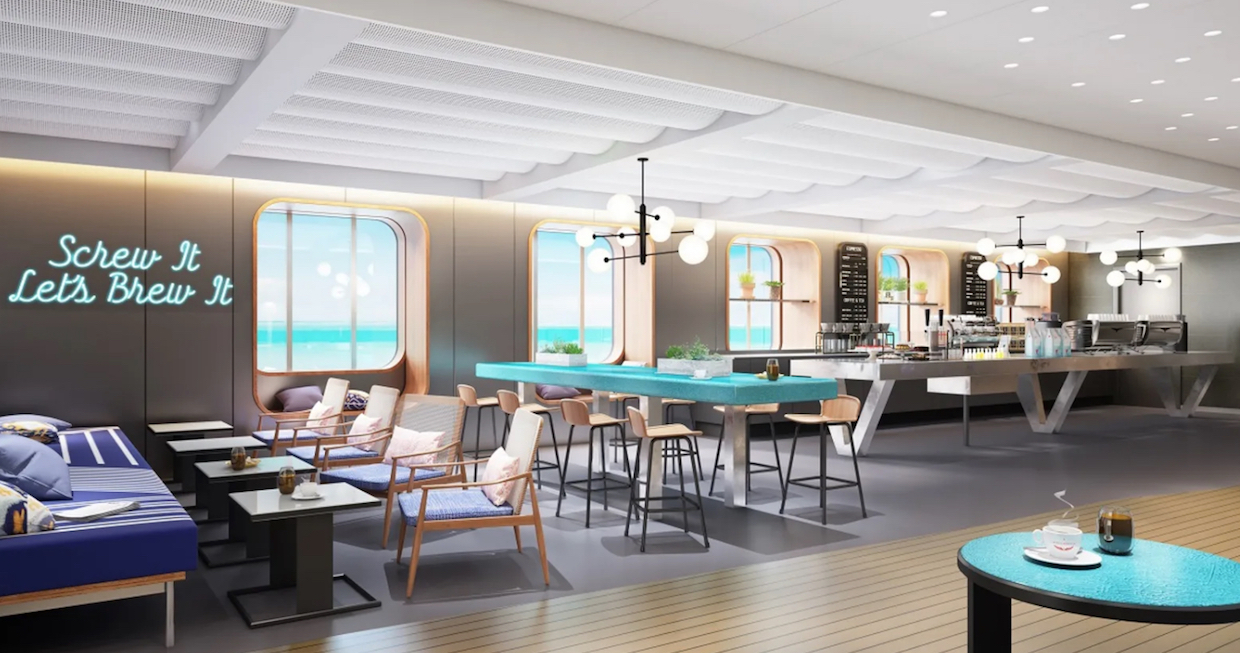 Some nimble marketing wizard came up with the tagline “Screw It, Let’s Brew It” for a rendering of the new Intelligentsia coffee bar at Virgin Voyages. Virgin Voyages photo.

Another convergence of upscale brands came this week when it was announced that Intelligentsia Coffee will be the exclusive on-board coffee partner for Virgin Voyages, the new “adults only” cruise line slated to set sail next year. Here’s more straight from Virgin:

From 2020, Sailors on Virgin Voyages will have coffee ground and created by Intelligentsia – a Chicago-based artisanal coffee supplier. Bid bad coffee goodbye as you’ll be in safe hands every single time you order from Ministry of Ground and Ministry of Ground Too – the two speciality coffee bars onboard Scarlet Lady and her sister ships.

The baristas serving at the ship’s coffee shops will be trained by Intelligentsia’s renowned coffee educators, which means your Flat White will be as flat as you like and your cappuccino frothy as standard. Though it goes without saying, it doesn’t matter how talented the baristas are if the coffee itself isn’t up to scratch.

The appetite for more luxurious coffee is being encouraged by the trade ministry in Cameroon with its annual Cameroon Coffee Festival. VOA News reported on the fest with print and video coverage:

An increase in coffee consumption, he says, will make Cameroon produce more. Cameroon can produce more, he says, if it can persuade the large domestic market to buy coffee and be prepared to satisfy them.

Industry insiders such as Pierre Andre Jr. of the Torrecam coffee factory blame a severe drop in coffee prices for discouraging coffee farming.

Kenyan President Uhuru Kenyatta is continuing his efforts to support coffee farmers in his country, offering new regulations that cap the amount of gross earnings eaten up by co-op societies, millers and marketers at 20%, and directing at least 80% of earnings to the coffee farmers. Of course, if approved by Parliament, there will also come a wad of new red tape, according to a Daily Nation report:

In a classic government move, the regulations introduce rows of bureaucracy which, according to the drafters, are aimed at ensuring that there is accountability and a paper trail.

The regulations introduce several licences. The county government will issue four licences, including those for coffee nurseries, pulping, milling and roasting. 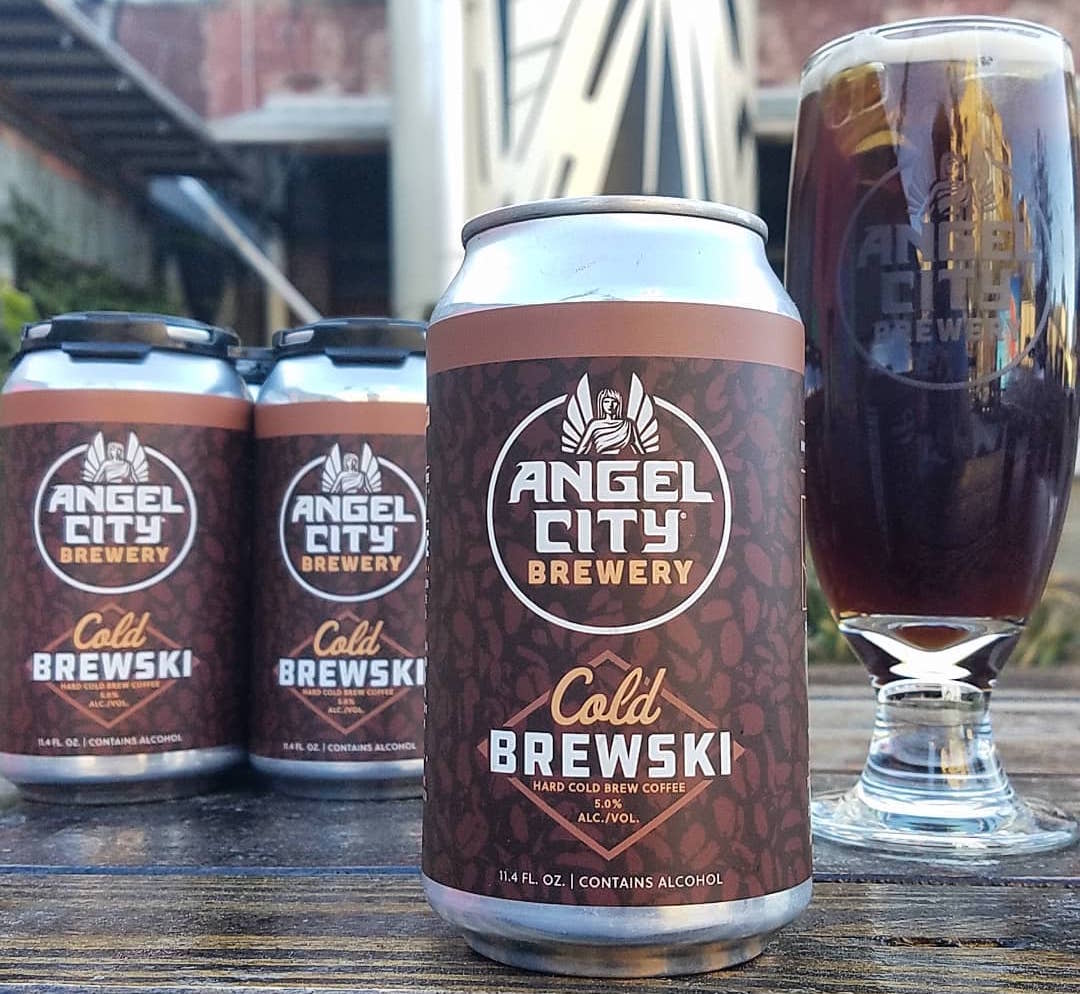 So much paperwork is enough to make a coffee person reach for a cold one. Los Angeles brewer Angel City Brewery hopes to make that one a Cold Brewski. The beer-maker’s take on “hard” nitro cold brew is available now at the brewery, according to a press release, and will launch through wider distribution next month:

Cold Brewski clocks in at 5% ABV, at 110 calories per can, best enjoyed over ice, doctored up with favorite coffee accoutrements. The new innovation from Angel City Brewery is a nitrogenated, cold-brewed hard coffee made from fermented cane sugar and coffee beans. The brewery used an industrial grinder for optimal flavor and aroma. The combination is then cold-aged, followed by a Nitrogen infusion to give it a creamy mouthfeel. 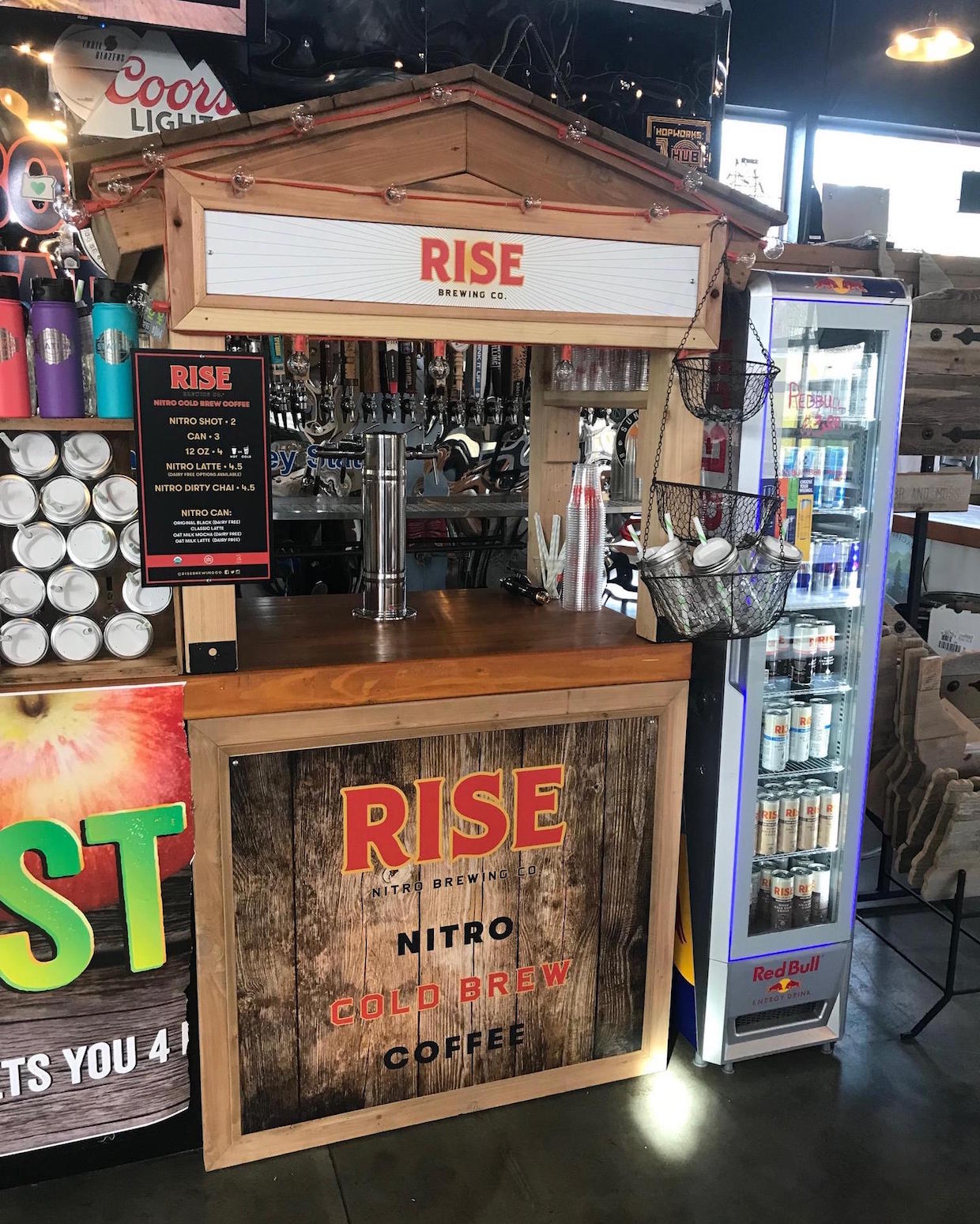 Nitro cold brew of a more Northeastern and less alcoholic variety also made progress this week. New York City-based Rise Brewing Co. has opened its first West Coast retail outpost. Taps and branding are now installed and serving from an addition to the beer bar at the Happy Valley Station food cart pod in Happy Valley, a suburb outside Portland, Oregon:

“At RISE Brewing Co. we view our brick and mortar locations as an opportunity to interact with consumers and receive real-time feedback on products,” said RISE Brewing Co. OR Regional Sales Manager, Rachel Ratliff. “With the opening of this new location, strategically placed within the Portland metro area and right on the way to the popular outdoor destination Mt. Hood, we now have the same face-to-face customer connection on the West Coast that we’ve had on the East Coast; truly taking the RISE Brewing Co. brand bi-coastal”, added Ratliff.