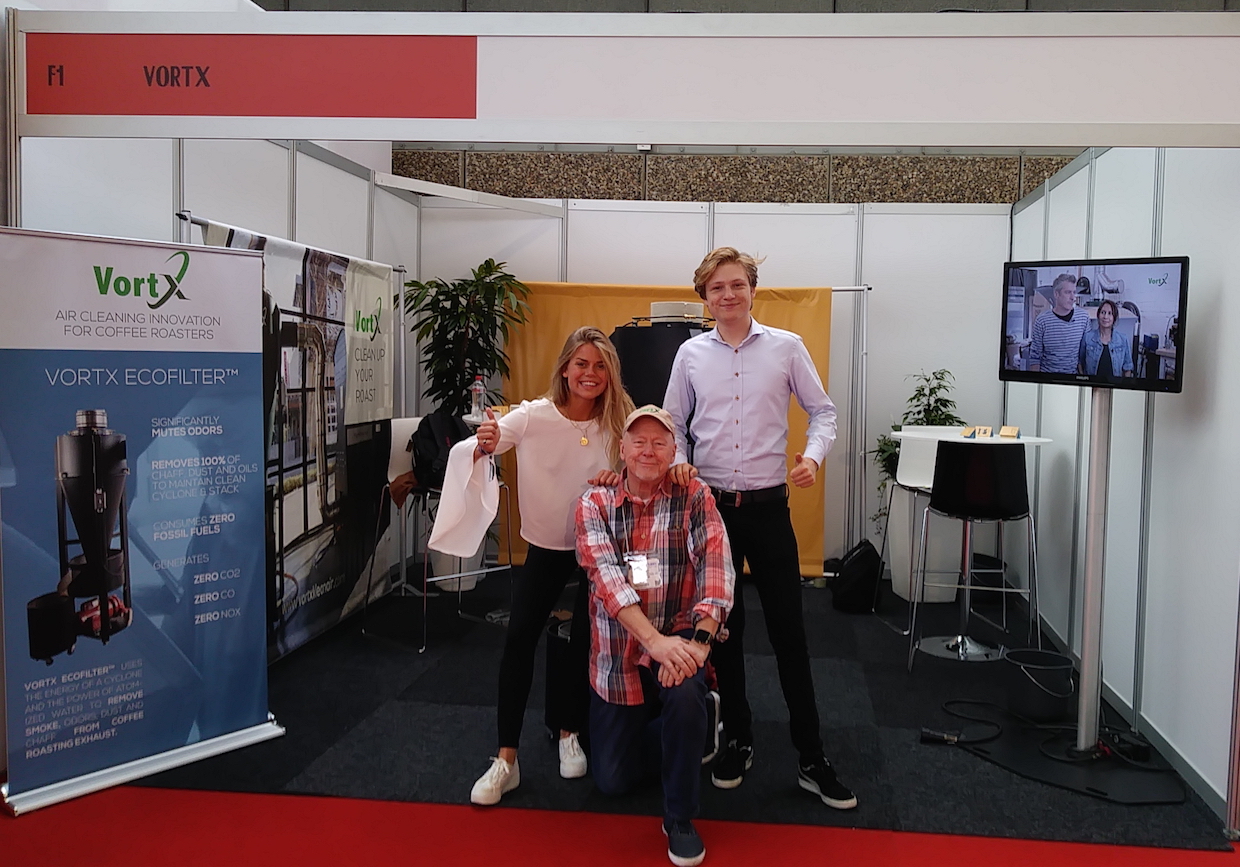 Ron Kleist (middle) at the Vortx booth at a World of Coffee event. All images courtesy of Vortx.

A relatively young California-based company by the name of Vortx Kleanair Systems has launched a cooler, wetter solution for treating emissions from traditional gas coffee roasters.

Vortx’s flagship product, the Ecofilter, is a wet scrubber positioned by the company as an alternative to incineration-based afterburners and other smoke and odor reduction systems for the commercial coffee roasting industry.

The Ecofilter consumes water and electricity instead of gas and operates at lower temperatures while reducing emissions by up to 90%, according to the company.

“The driving force behind VortX is simple,” Ron Kleist, president of Vortx and co-inventor of the Ecofilter, told Daily Coffee News. “We wake up every day deeply concerned with the health of our planet and our desire to provide the means for specialty coffee roasters around the world to take a leadership role in making those changes which are immediately possible to limit the damage already done.” 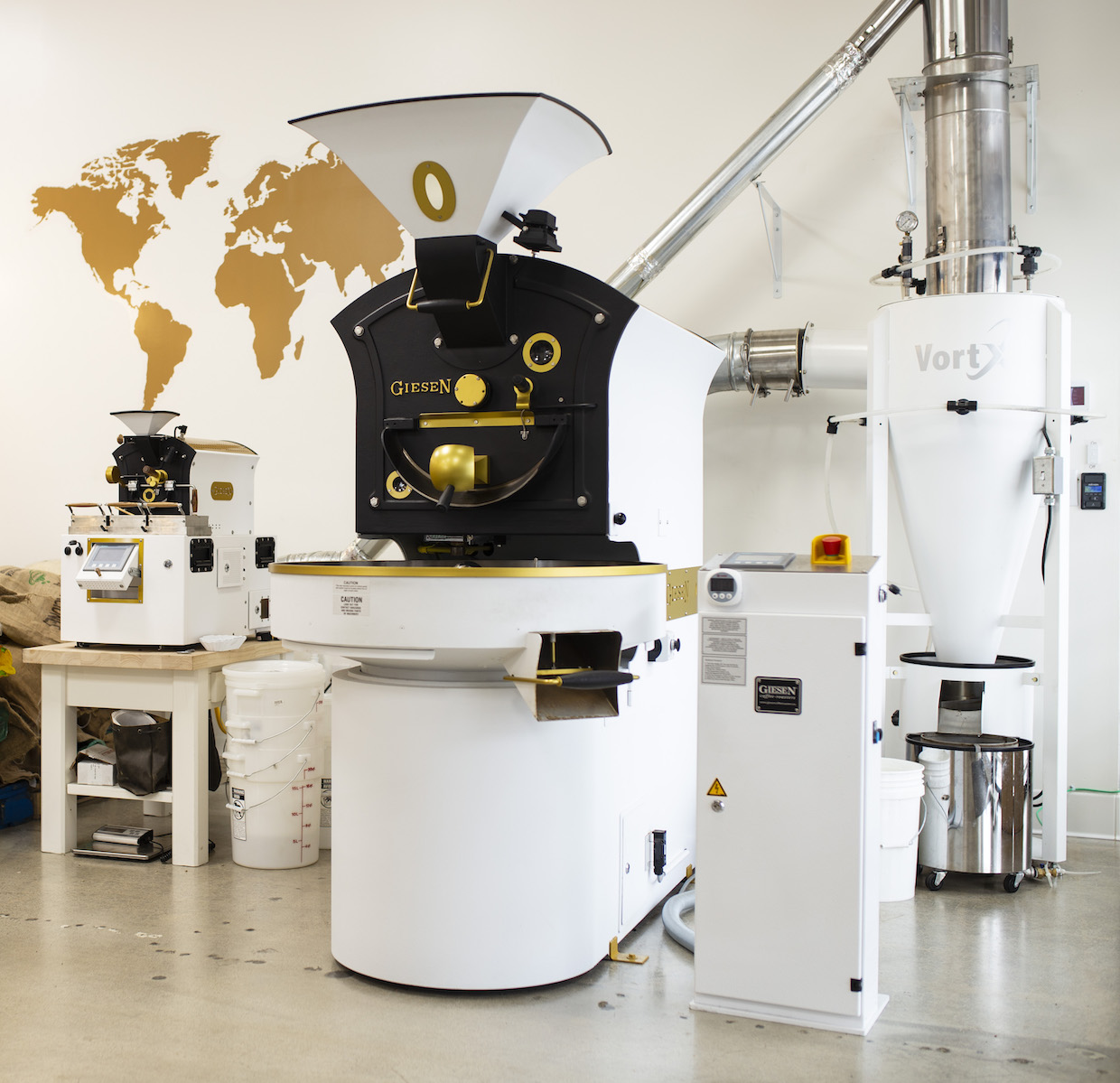 When the hot, polluted air exiting a coffee roaster enters an Ecofilter system, it flows through a chamber containing atomized water that flash-evaporates on contact, cooling the contaminants to a temperature low enough that they condense from vapor into droplets. Centrifugal force inside the cyclone then draws the droplets to the walls where they are caught by a flow of water and flushed downward.

Clean steam exits at the top of the stack. At the bottom, the exiting water is filtered and the chaff is separated and compacted. The stack remains clean and clear, Vortx suggests using the wet chaff as a soil amendment in gardening, and the spent water can discharge directly down any grey water drain or be used to water a garden.

The system starts its day with 20 gallons of clean water, then consumes an additional 1-2 gallons per hour under average production roasting conditions, according to Kleist. The pump averages about 7 amps per hour.

Kleist was deeply immersed in the pursuit of environmentally friendlier coffee roasting while serving as president of California-based Loring Smart Roast for a three-year period ending in 2013.

“I found a real calling in commercializing Mark Ludwig’s invention of a smokeless roaster,” said Kleist. “After getting Loring to positive cash flow, I went back to run a company in an industry I know well, human performance and ergonomics. I sold [Smartmotion Ergonomics Ltd.] in 2017 with plans to retire, but fate and my love of coffee had other plans.”

Kleist linked up with old friends Willem Boot — the founder of Boot Coffee Campus and owner of Panamanian coffee farm Finca La Mula — and Calvin University engineering professor Renard Tubergen to develop a wet scrubber that could be applied to any roaster while addressing problem issues such as loud noise, high water consumption and negative impact on air pressure.

“We set as our goal to produce a product with a minimal footprint, ease of maintenance, greater safety, and most importantly, improve air flow from any roaster,” said Kleist. “We were all involved in one way or another with Loring, and came to realize the impact that a ‘smokeless roaster’ could have on the environment and operating costs.”

The first generation product was introduced to roasters at the SCA Expo in 2017. Since then, Tubergen, chief scientist and engineer for Vortx, has tweaked the Ecofilter in ways that have reduced its price to buyers while improving its performance.

Systems are now installed on five continents, according to Kleist, who said the company is focusing now on developing both larger and smaller units with additional automation capabilities, accommodating roasters ranging in capacity from 3 to 300 kilograms. Vortx is also coordinating with OEM roaster manufacturers to integrate its systems in with theirs.

“Think ‘Intel Inside,'” said Kleist. “We press on knowing that no one who is roasting coffee wants to disturb their neighbors with smoke and odor, and no one wants to continue harming the earth’s atmosphere by burning the massive amounts of gas necessary to incinerate the exhaust.”