Hands-Free Aeropress? You Need to See this Gas-Powered Custom Machine 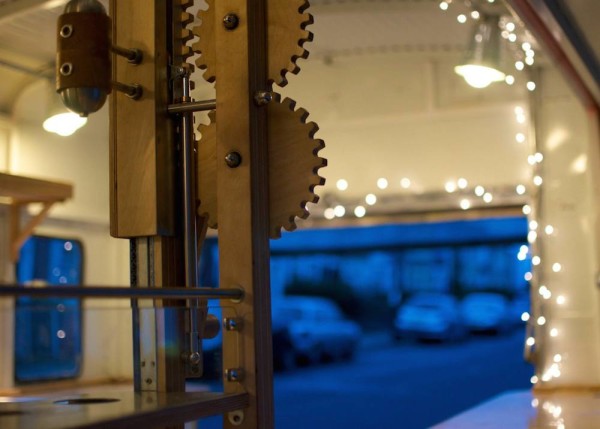 A sneek peek of the Brewbar’s custon Aeropress machine.

The founders of the mobile Brewbar in The Midlands of England have created a custom contraption for Aeropress brewing that is one part pure functionality and one part Willy Wonka theatrics.

This is the second version of the custom machine designed by Bart Kerswell and Ben Collier. It responds to the fact that the Brewbar, which is outfitted for espresso drinks and Aeropress coffees, was getting backed up on Aeropress orders, resulting in coffees being rushed out to quickly and sore arms.

(related: South Korea’s Cafe Dreamy May Be the Strangest and Coolest Cafe in the World)

“We initially started off selling Aeropress coffee from our geodesic dome but got arm aches from pressing so many coffees,” Kerswell tells Daily Coffee News.

The Mark 2 version of the two-unit brew station involved adding gas struts with a set pressure that Kerwell says treats the Aeropress somewhat like an espresso machine set to 9 bar. A system of cogs and levers allows Kerswell and Collier free hands to attend to other activities at the bar.

(related: What Happens when a Hungarian Roaster Geeks Out on a Moka Pot for Months)

The machine is also designed to create attention and promote more black coffee drinks, Kerwell says. “We have nothing against milk-based drinks — we do have an espresso machine in our van too,” he says. “We wanted the coffee to shine and not be hidden in the milk, and we feel that coffee as a whole in the UK is still very much milk-based. People will often opt for latte, which is a really shame when there are amazing brew techniques.

The Brewbar can currently be found traveling throughout The Midlands, and Kerswell told Daily Coffee News they may be looking into a brick-and-mortar retail shop.

Here is the Brewbar’s Mark 2 Machine in action:

I bought an aeropress two months ago and have been using it consistently three times a day. Now I know why I have a sore arm/ shoulder .