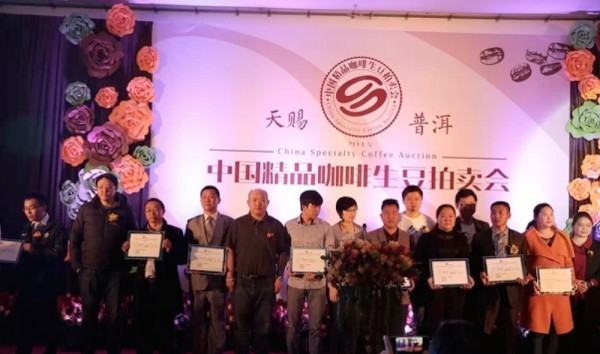 A Chinese specialty coffee auction in January shattered all expectations and broke a world record for live auctions, with a winning lot fetching $189.32 USD per pound.

The auction was the culmination of the Pu’er Green Coffee Competition, and it marked the debut of the Yunnan Coffee Exchange, a new group working to define and promote specialty coffee in the province. More importantly, it firmly established the presence of Chinese-grown specialty coffee and the willingness among Chinese buyers to pay exorbitant prices for it.

The competition brought together 24 licensed Q-graders from throughout China and Taiwan to score 62 samples from 51 different producers. Former SCAA and CQI executive director Ted Lingle served as head judge. Half of the sampled coffees scored 80 or above, doubling the percentage of coffees earning specialty grade in last year’s Pu’er competition.

The 10 top lots were presented in a live auction, where the tone was set by the 10th-highest-scoring lot fetching a bid of just over $40 per pound. The highest-scoring lot, identified as YXC-001, sold for $189.32, representing the highest price ever paid for green coffee during a live (non-internet) auction. The high bidder purchased the entire lot.

All of the winning bids for 80+ coffees, as well as coffees that scored lower and were auctioned silently, came from Chinese roasters and retailers.

“I was not as much surprised by the quality of the coffee as I was by the record setting prices at the auction that followed the competition,” Lingle told Daily Coffee News this week. “I’ve
never seen such strong support for coffee growers by the local coffee community.”

“This cupping competition was designed to select the coffees for the first Yunnan Specialty Coffee auction, as well as promote farmers’ enthusiasm to improve quality and accelerate the development of Yunnan coffee industry,” Mr. Shu said in an announcement preceding the auction. He added that it was the first step in a long-term plan to improve collection, distribution and establish training centers to support the branding and dissemination of Yunnan coffees.

I’m curious, the entire lot that was purchased at $189 per lb was scored at what?

I’m curious who the buyers were specifically and how informed they are about coffee and the coffee industry. I mean seriously, is this Yunnan coffee (even the best lot) comparable to quality from the geshas, white coffee/ kopi luwak, or even the 100% Jamaican Blue Mountain and Hawaiian Kona coffees to justify the steep price? Maybe it was worth the price, considering it was an auction, but I have my reservations.

It’s nationalism. If poop can be a $100 per pound coffee, nationalism can be a $200 dollar 82 point washed catimor.