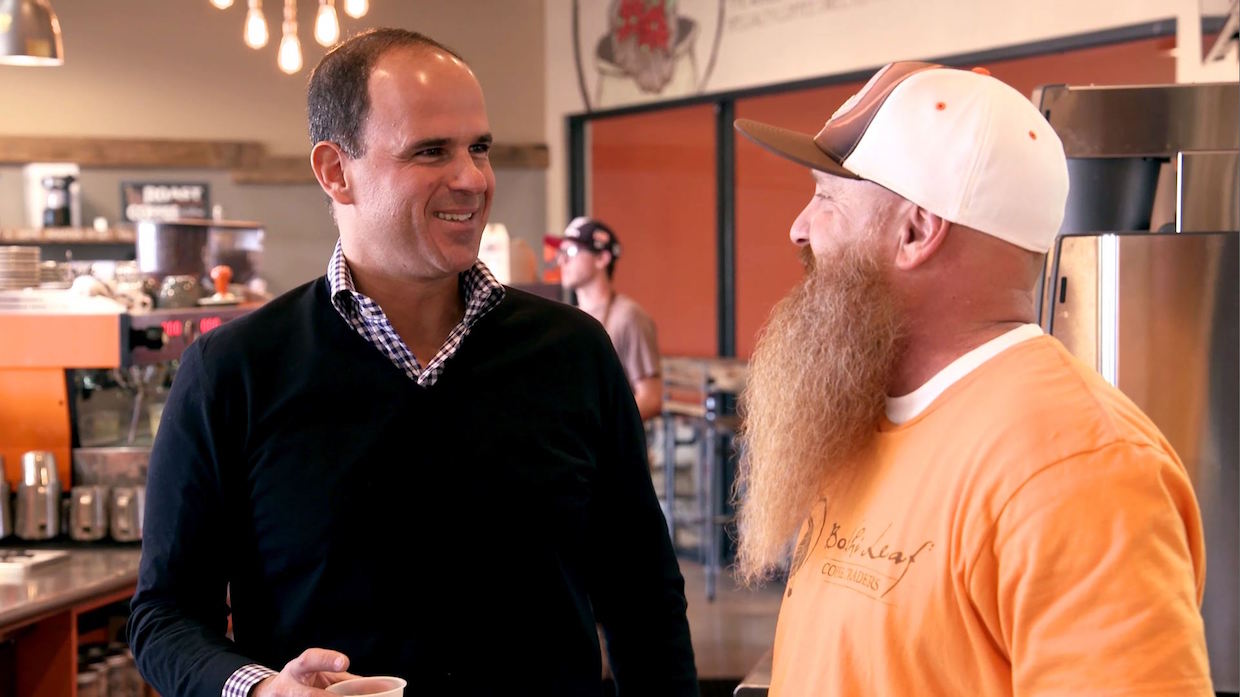 Footage from the filming of “The Profit.” Photo courtesy of CNBC.

Steve Sims, founder of California-based importing, wholesale and retail green and roasted coffee company Bodhi Leaf Coffee Traders, recently set out to raise investment capital to scale his business. This lead him into a relationship with celebrity investor Marcus Lemonis, whose partnership has not only benefitted BLCT but also lead to the cofounding of the new company Red Beard Coffee Traders, poised to launch soon in Chicago providing services much like Bodhi Leaf does out West.

Sims and Lemonis went from strangers to colleagues to BFF’s over a period of months, every minute of which was chronicled by a battalion of cameras and microphones and scrunched down into a single episode of Lemonis’ show, “The Profit.”

A CNBC press release announcing the new season of “The Profit” describes the show thusly: “Known for his famous ‘three Ps’ ─ People, Process and Product ─ Lemonis is back to help save and grow struggling small businesses across the country, putting his own money on the line in the process. With Lemonis’ help, these owners have a unique opportunity to get back on the path to success — but only if they hand over the reins and recognize that he’s 100 percent in charge.” 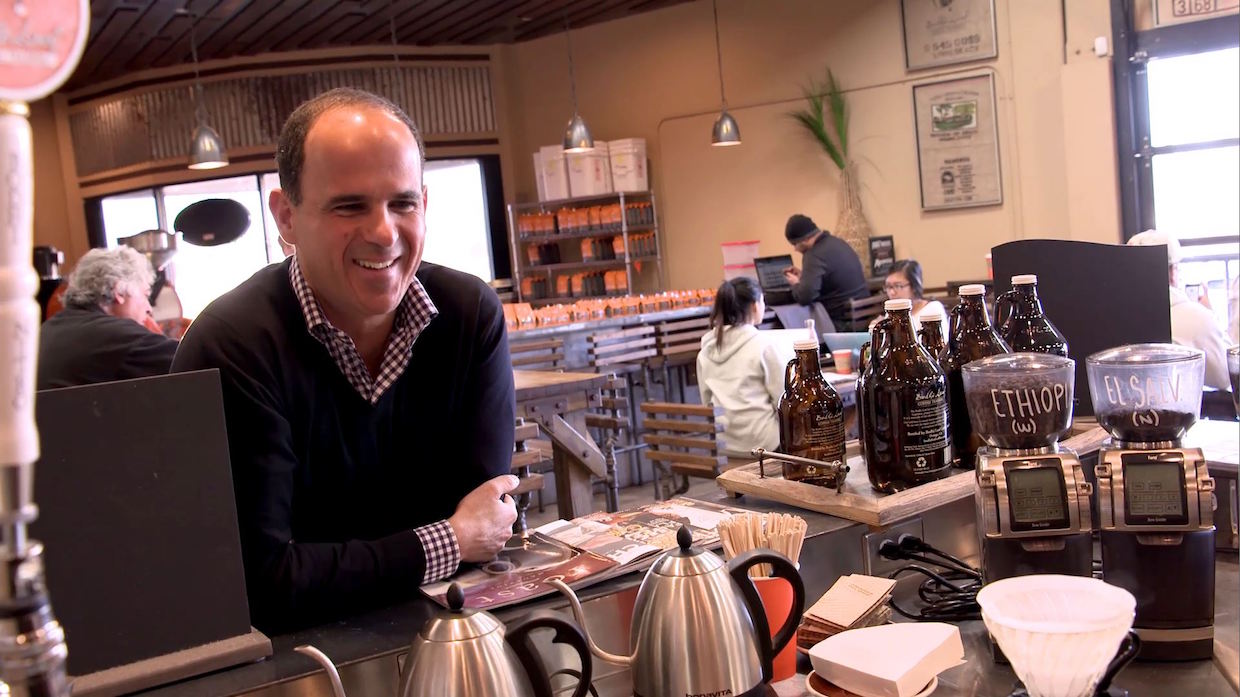 Marcus Lemonis. Footage from the filming of “The Profit.” Photo courtesy of CNBC.

In these scenarios, drama typically ensues, as most small business people have a lot invested in their businesses — money, of course, but also an abundance of passion and pride.

“It was way different than I expected, for sure. It was semi-stressful, and a lot more emotional than I ever imagined,” Sims told Daily Coffee News. We caught up with the affable Red Beard himself for a spoiler-free glimpse behind the cameras, to find out how it felt to get wrapped up in a reality TV environment and what his new non-televised, day-by-day reality in the specialty coffee business has become in the wake of it all:

Were the cameras really close to your face, like actual hardware in your way the whole time, or were they a few feet off and just zooming in and out?

It was a combination of everything. Me and my staff had to all wear microphones during everything, and they were shooting the whole entire time, even when you’re going to the bathroom. There were about three to five cameras at a time, some close, some far, just filming during the whole process.

Did you have any Bodhi employees object or take a leave of absence just to avoid being on the show?

Everybody was on board. I definitely had to ask everybody and had a meeting with everybody to make sure they were ok with it before I moved forward with the show. 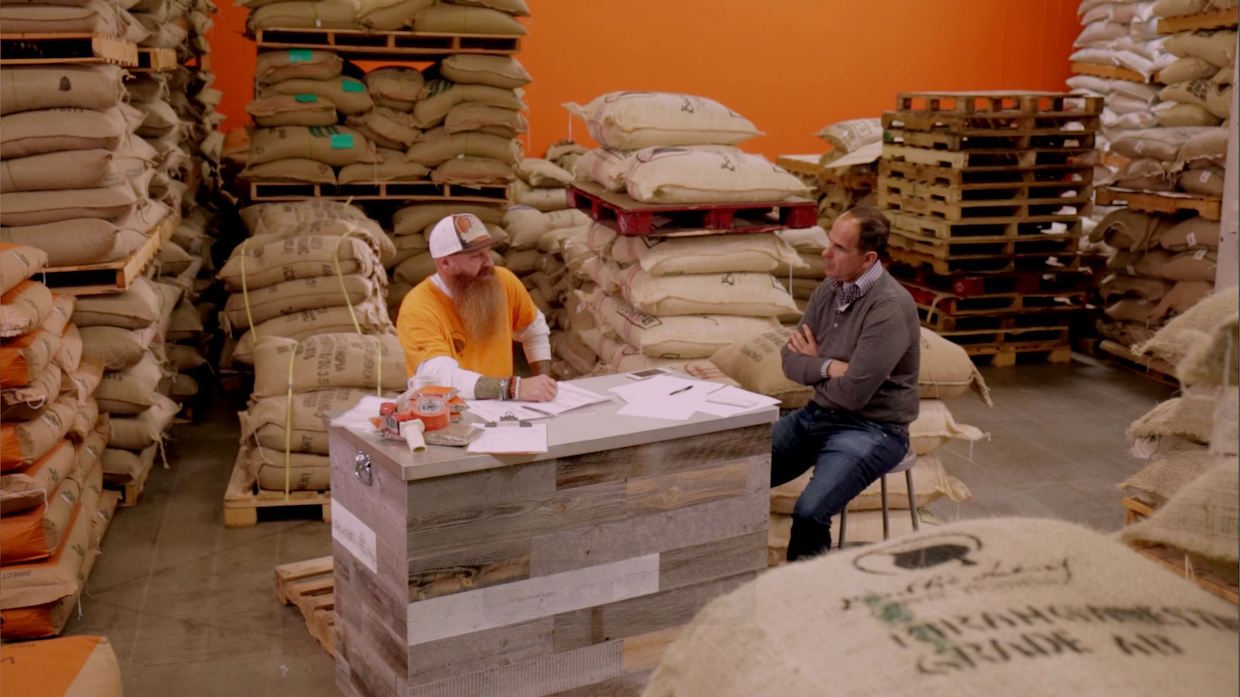 Footage from the filming of “The Profit.” Photo courtesy of CNBC.

Did you get any showboats, like people showing up with pink mohawks or doing something else just to try to get on camera a bit more?

And how is Bodhi now? How have things changed for Bodhi Leaf since partnering with Lemonis?

Marcus has made it where I’m able to do business like I always wanted to. It’s really actually kind of amazing. Kind of surreal. He’s made it so that I’m able to buy inventory, scale my business, even made it where we’re able to look at acquiring other roasters, which we’re currently doing. It’s a whole different mindset of my business now, than say six months ago. The way I’m looking at my business now is completely different, all because of Marcus.

Now that it’s all said and done and you’re moving on with your lives and on with real business, how often do you sit down with Marcus and collaborate?

We talk on the phone or text every few days. I do deal very closely with a couple guys that work with him that were on the show over the last couple years. Marcus and a few of those guys have not only helped me a lot with my business, but they’ve all become close personal friends that I feel are going to be friends for life, along with our business venture.

Sims went on to confirm for us that Red Beard Coffee Traders is still on the way, though a bit late, due to regulations affecting the landmark status of the building within which its first location is soon to open in a prime location in Chicago’s Wicker Park. He’s loathe to provide an estimated opening date as these he said have a tendency to be wrong, but sometime around three months from now looks probable. Multiple other Red Beard locations are also currently in active development.

The Bodhi Leaf / Red Beard episode of The Profit will air on CNBC on Tuesday, July 11 at 10 p.m. ET.