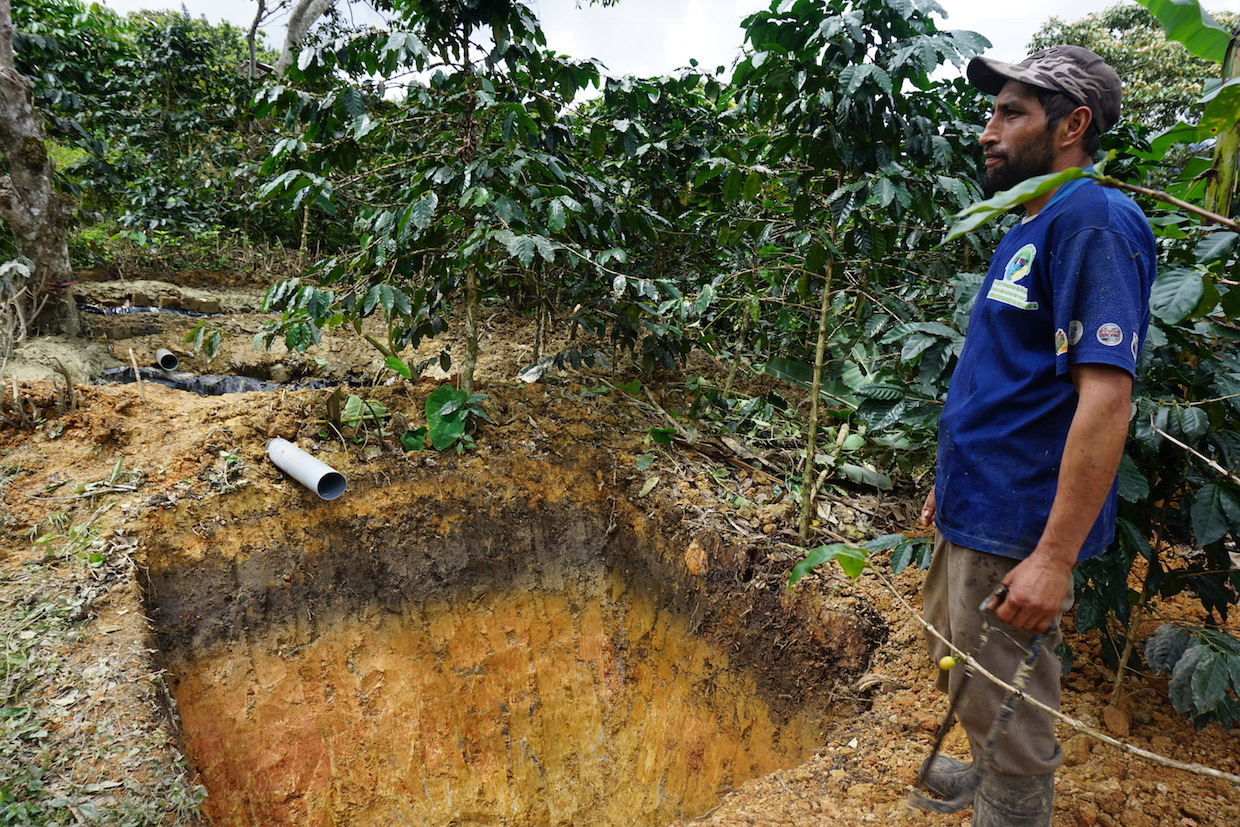 A newly established wastewater filtration pit system that helps remove organic material produced by coffee processing before it is released back into the environment. Photo courtesy of the Arbor Day Foundation.

Known largely for its domestic efforts such as the “Tree City USA” program and its partnerships with the US Forest Service, the Nebraska-based nonprofit Arbor Day Foundation has established some deep roots in the coffeelands, too.

Earlier this year, the group officially launched Project 2050, which is designed to inspire the coffee industry to promote and enable greener practices throughout the supply chain. The two-pronged program involves growing Arbor Day’s existing sustainable coffee sourcing efforts, while offering roasters and other interested parties a marketable initiative to purchase carbon offsets while directly supporting forest-related projects in the coffeelands. 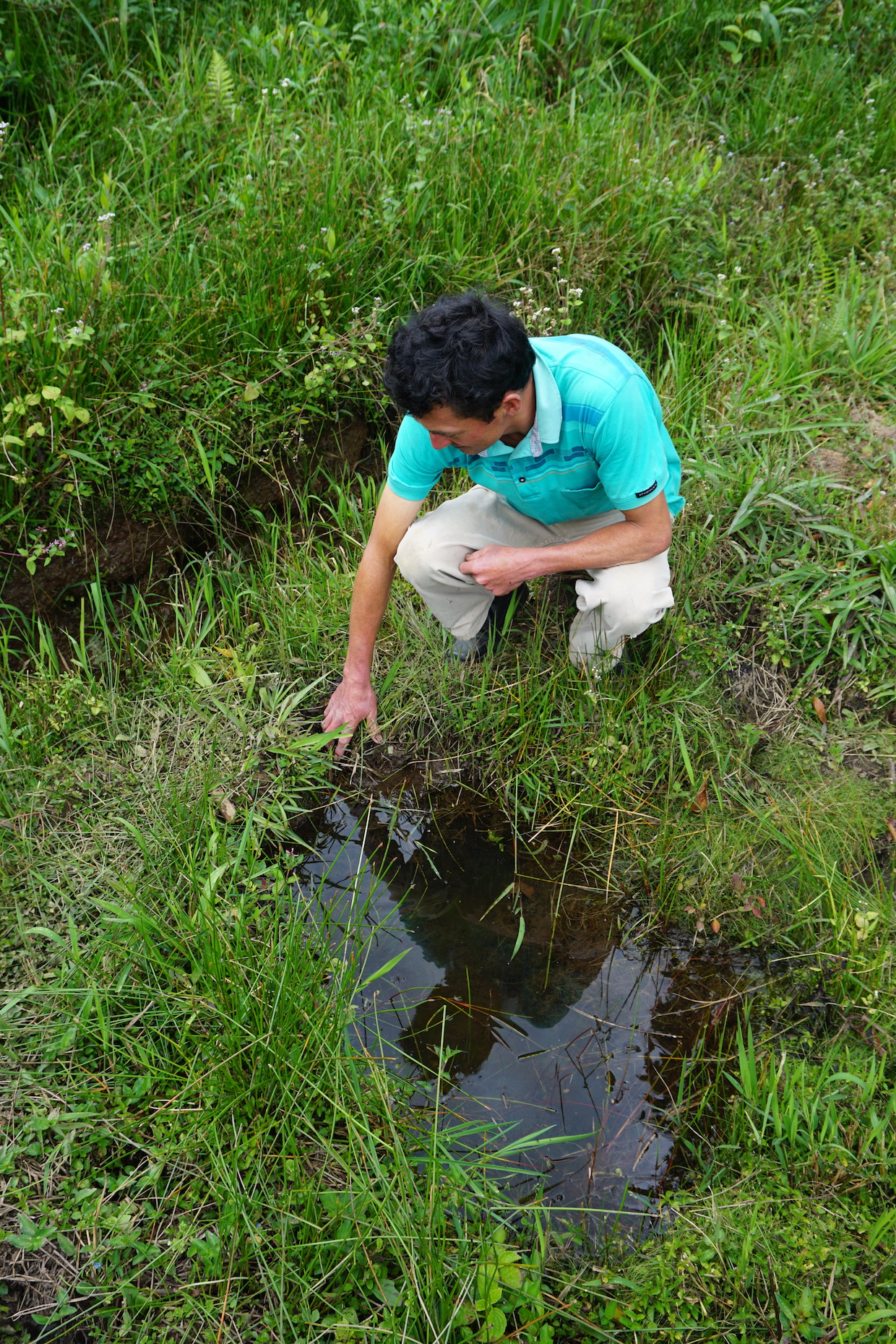 Arbor Day is currently sourcing a little over 1 million pounds of coffee per year, much of which is roasted for sale directly to consumers or wholesale clients under the Arbor Day brand, according to longtime coffee buyer and roaster Jon Ferguson, who serves as the organization’s coffee quality specialist.

With Project 2050 — the name references dramatic forecasts of the reduction of suitable coffeelands over the coming decades — Arbor Day hopes to extend its reach to roasters throughout the U.S., while hopefully involving more like-minded partners throughout the coffee world.

Said Ferguson, “I really want to get shade-grown back into the mainstream.”

Ferguson has been routinely traveling to origin to meet with producers who might meet Arbor Day’s in-house sustainability standards for coffee. However, Ferguson is quick to note that this is not intended to be a certification scheme. 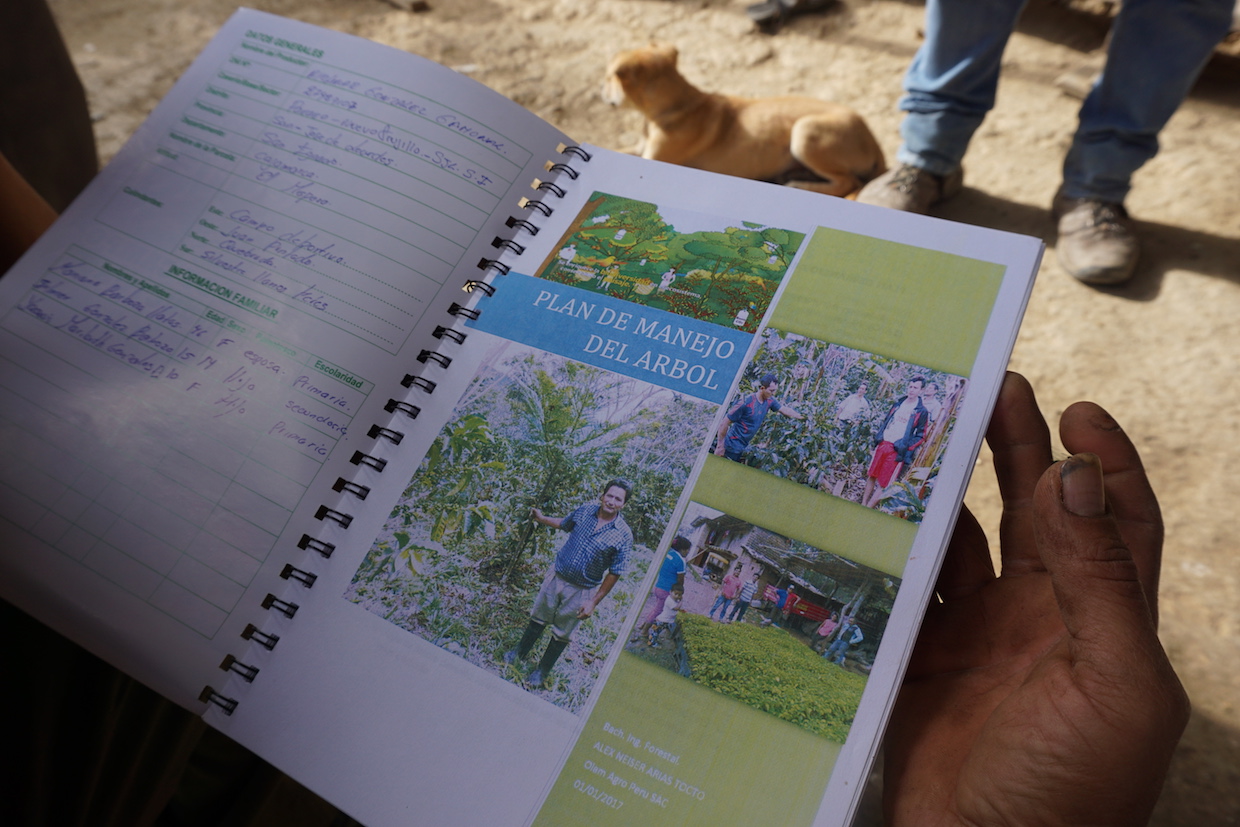 Booklets on how to manage trees, quality, and recording activities where distributed to each farmer through extensionists. Photo courtesy of the Arbor Day Foundation.

“For shade-grown coffee, historically it’s been the Smithsonian bird institute,” Ferguson said, noting that the organization’s strong efforts toward protecting migratory bird populations sometimes don’t easily apply to coffee production. “But there is a spectrum of shade cover — monoculture, rustic, traditional polyculture… Is there another way to incorporate maybe a new definition of what shade-grown can be?”

For Project 2050, Arbor Day has outlined four purchasing standards for sustainable agroforestry management practices, involving: 1) tree management; 2) water management; 3) coffee quality planning; and 4) environmental education. Yet unlike with voluntary certification schemes, the Arbor Day team is adapting these standards on a case-by-case basis based on the farm’s existing capabilities and financial concerns.

“Certification is not really were we want to go; we want to go with recognition — recognition of efforts on the farm,” Ferguson said. “When I go to a farm, I want to take the approach that a lot of the founding ‘direct trade’ companies took. I wanted to take that same path with more of an environmental approach.” 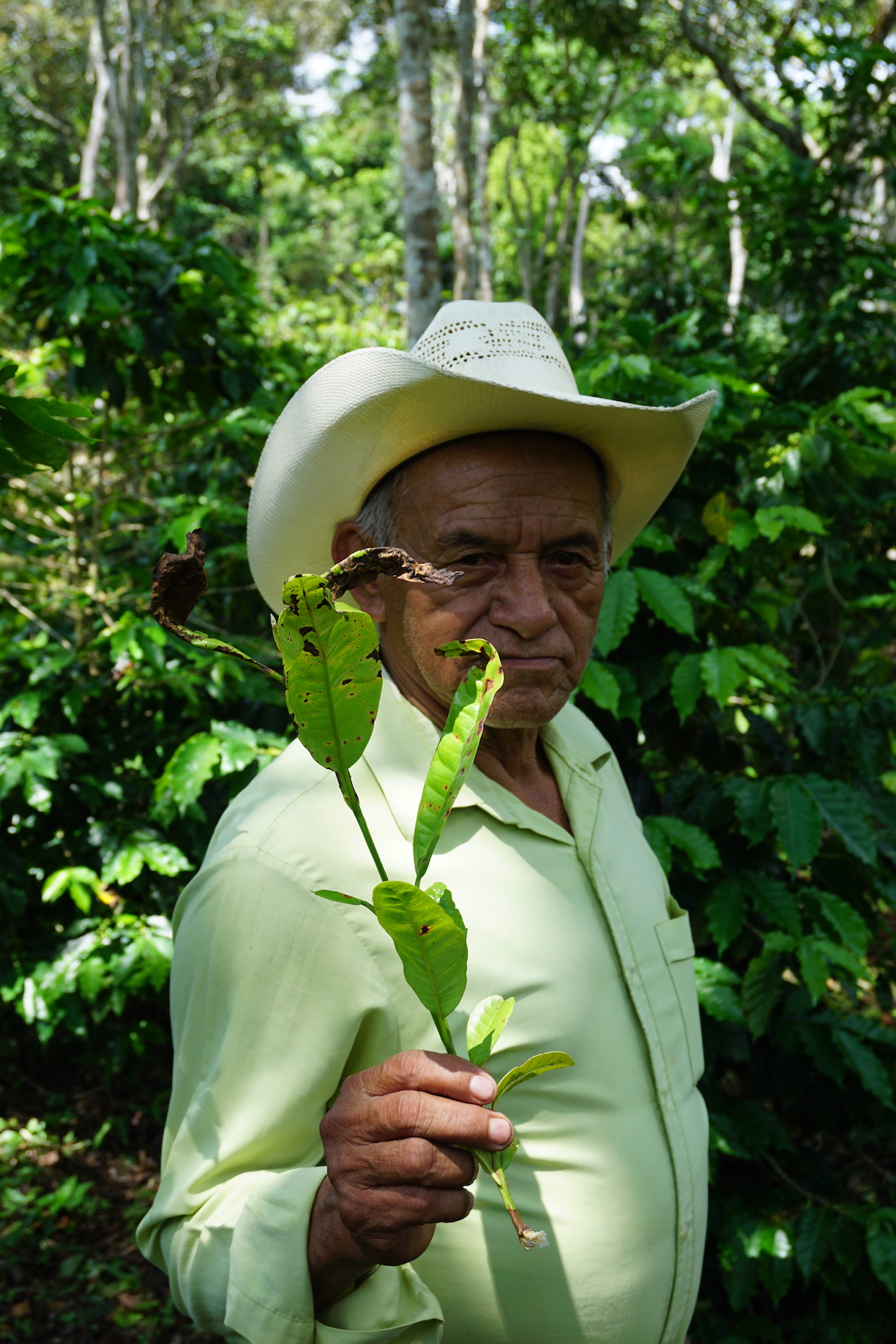 Eladio Gómez Pérez from the San Fernando Cooperative in Peru is holding up one of the many important crops that are integrated into the fields, black pepper. Photo courtesy of the Arbor Day Foundation.

Ferguson said the last thing the group wants to do is require producers is to meet an extensive checklist of qualifications that may not be applicable, or to fill out a pile of paperwork that might be redundant should they already be doing so in-house or for other certification schemes.

“We look for paperwork they’ve already done before,” Ferguson said. “Our mission statement is to inspire people to plant trees. They don’t have to meet all the criteria, but they do have to commit to making improvements year after year.”

The second major component for Project 2050 is a carbon-negativity program in which roasters can purchase third-party-verified carbon offsets while supporting Arbor Day’s sustainable agroforestry development in the coffeelands. 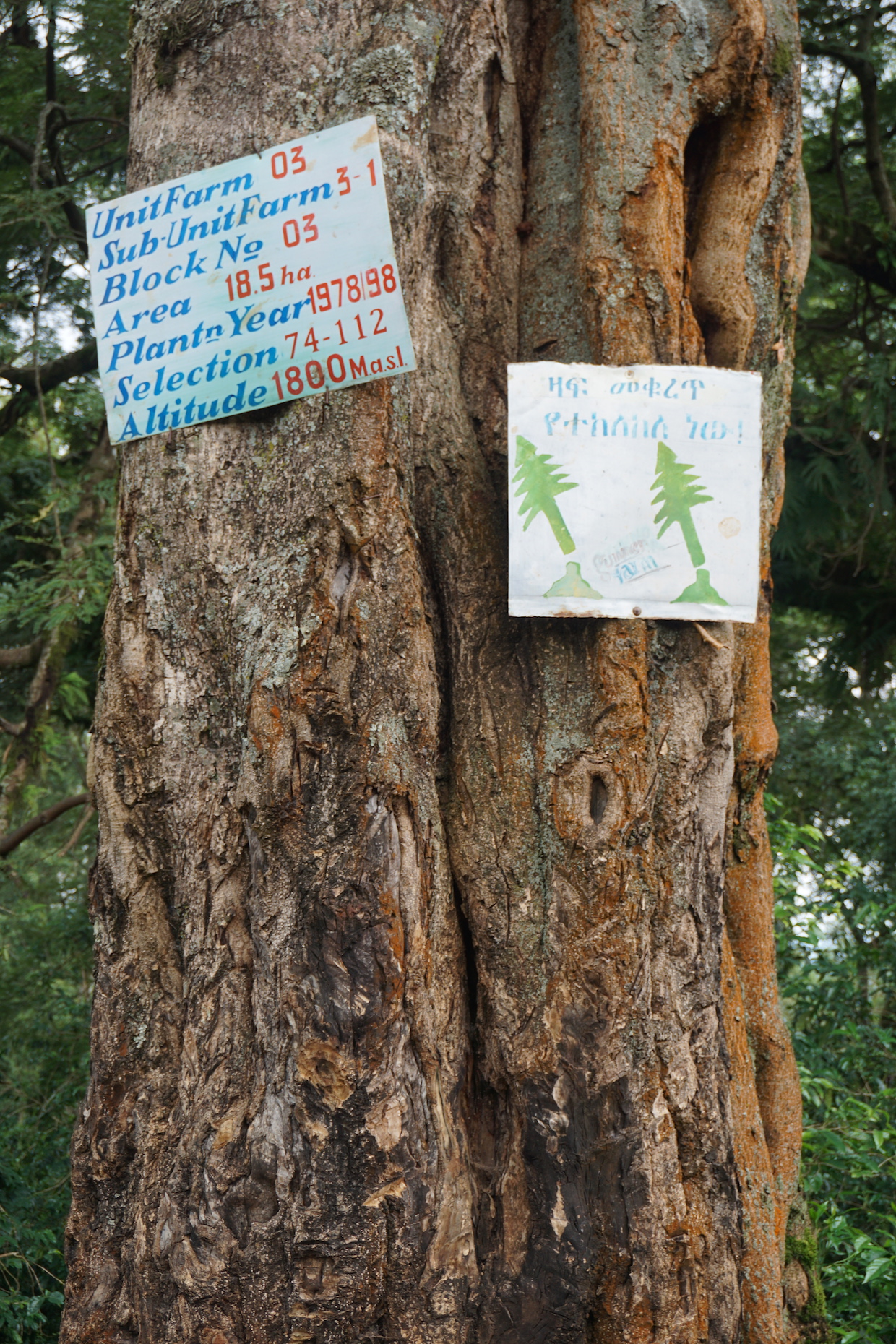 Ferguson said the program offers roasters an essentially barrier-free road toward offsetting the carbon emissions created through their own operations by simply purchasing carbon credits. Using its own coffee-specific formula, Arbor Day has estimated that on average in the U.S., one pound of roasted coffee generates 11 pounds of carbon throughout the supply chain, although Ferguson admits such a number is inherently “highly debatable.”

For the program, roasters are asked to purchase $0.18 cents of credit per pound of roasted coffee. Doing so gives them access to marketing materials showing their involvement in the Arbor Day Foundation and its Project 2050 program, including a bag sticker that reads “carbon-negative coffee.” 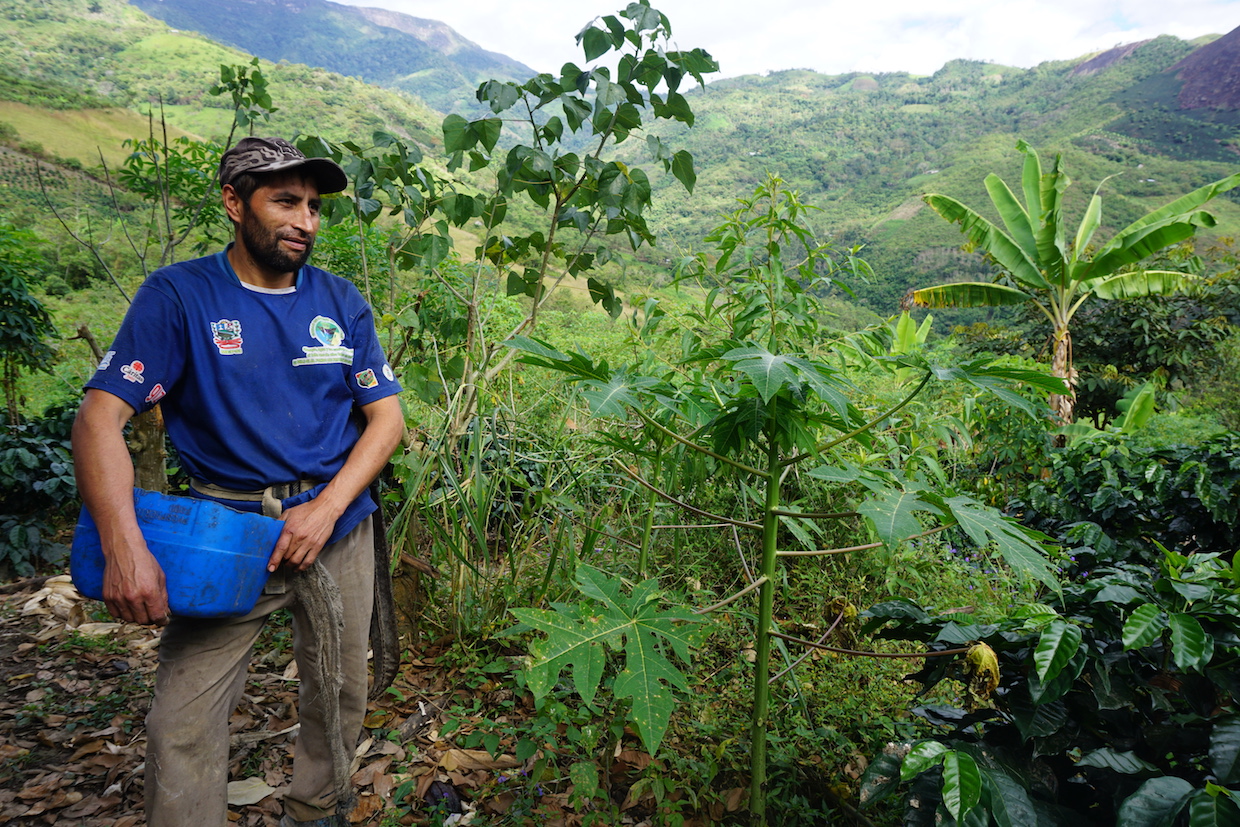 Apolinar Gonzalez Gamonal stands next to a young native shade tree that will continue to strengthen his shade canopy for coffee production in Paradiso, Cajamarca, Peru. Photo courtesy of the Arbor Day Foundation.

“We do have a wide reach outside the specialty coffee industry, that may not be really well known within the industry,” Ferguson said of the potential appeal of the Foundation seal on a bag of coffee. “I believe it could help differentiate those smaller roasters.”

There’s something to that. Earlier this year, we highlighted a report from the Earth Security Group that underscored the importance of mainstreaming shade-grown conditions in order to protect the long-term global coffee supply amid changing climatic and market conditions.

Supported by a wealth of research showing shade-grown’s positive effects on coffee quality, environmental sustainability and even total farm profitability, the report addressed major industry players in the business of roasting and selling brewed coffee. It identified supporting shade-grown and biodiverse practices as “the next frontier in business model innovation,” while urging coffee companies to exercise their marketing capabilities to generate demand for shade-grown. 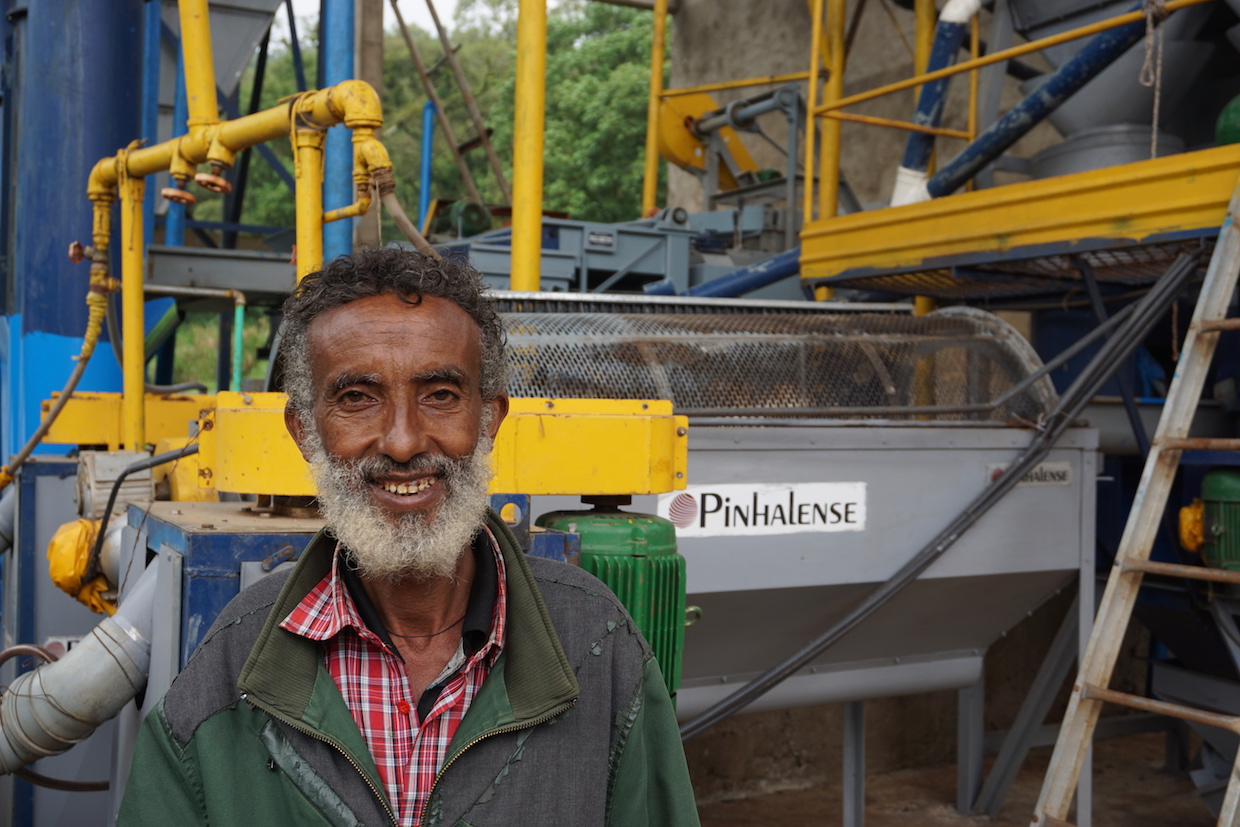 A pulping station manager in Ethiopia. Photo courtesy of the Arbor Day Foundation.

“You think about, ‘Give a hoot, don’t pollute,’ or Yogi the Bear, those seem to work for me,” Ferguson said, “but I don’t know how that works for shade-grown coffee.”

For now, Ferguson said Arbor Day is hoping to grow the program one shade-focused partner at a time. “We don’t want to be an importer, but I would love to work with some supply chains,” Ferguson said. “Say there’s someone in Ecuador who wants to help [producers] get recognized for their shade practices at the farm level, to differentiate their coffee that way; I’d love to work with organizations like that.”