Trinity One Maker Unveils the Origin Decanter For Pourover, Cold Brew and Wine 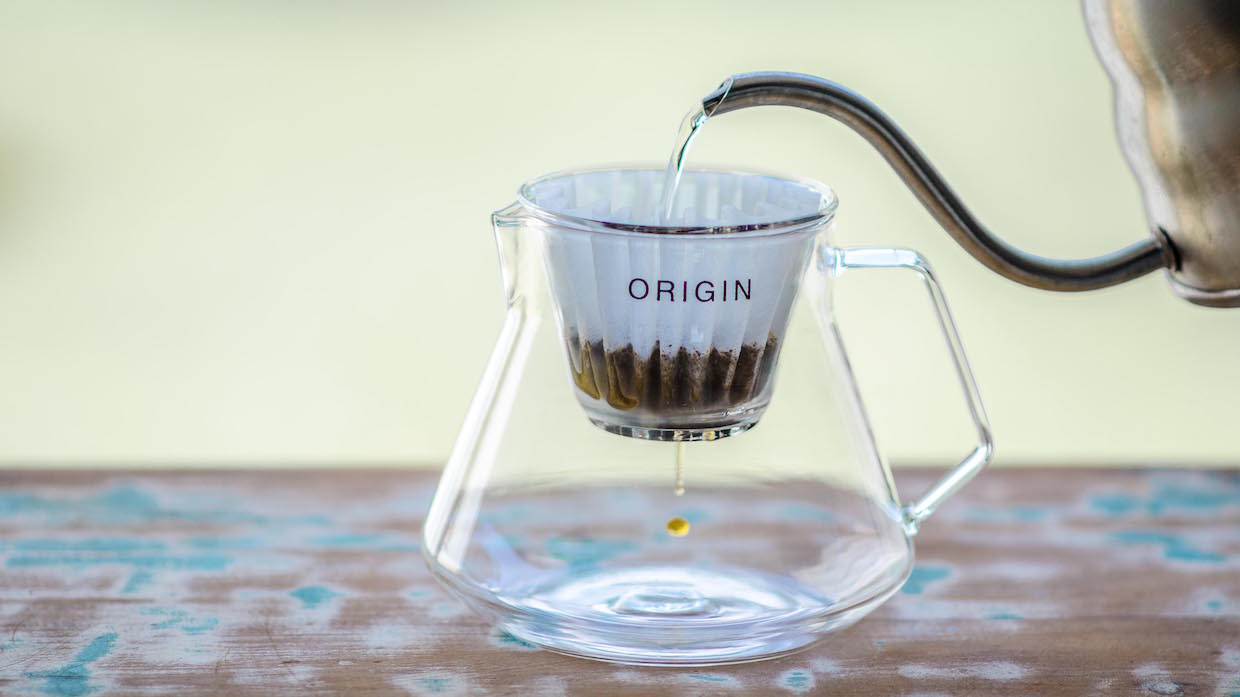 It has been roughly a year since Australian designer Mark Folker’s multifaceted Trinity One brewer emerged from down under to provide early adopters with its variety of sophisticated brewing options.

Now Trinity Coffee Co. is releasing another brewing device, the Origin Decanter, which offers its own system of flow control and works either in conjunction with or independently of the Trinity One brewer. 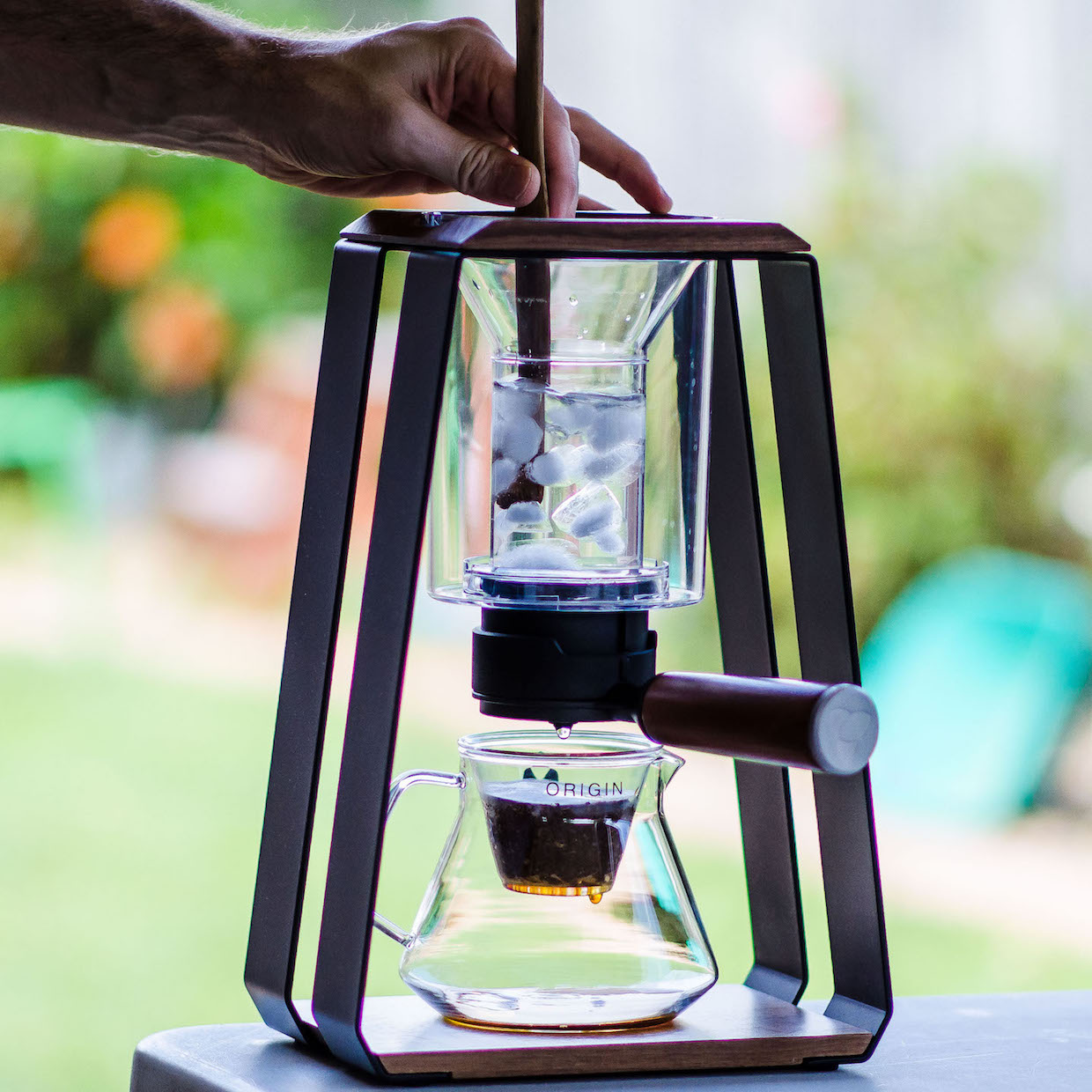 The Origin Decanter with the Trinity brewer.

The Trinity One line has since expanded to include a sleek matte black version of the brewer, which involves a weighted stopper that applies consistent, repeatable pressure to water within an Aeropress-like brewing chamber. The chamber leads to a split-shot-style portafilter that contains its own filter housing that, according to its makers, distinguishes the final product from Aeropress or other methods. 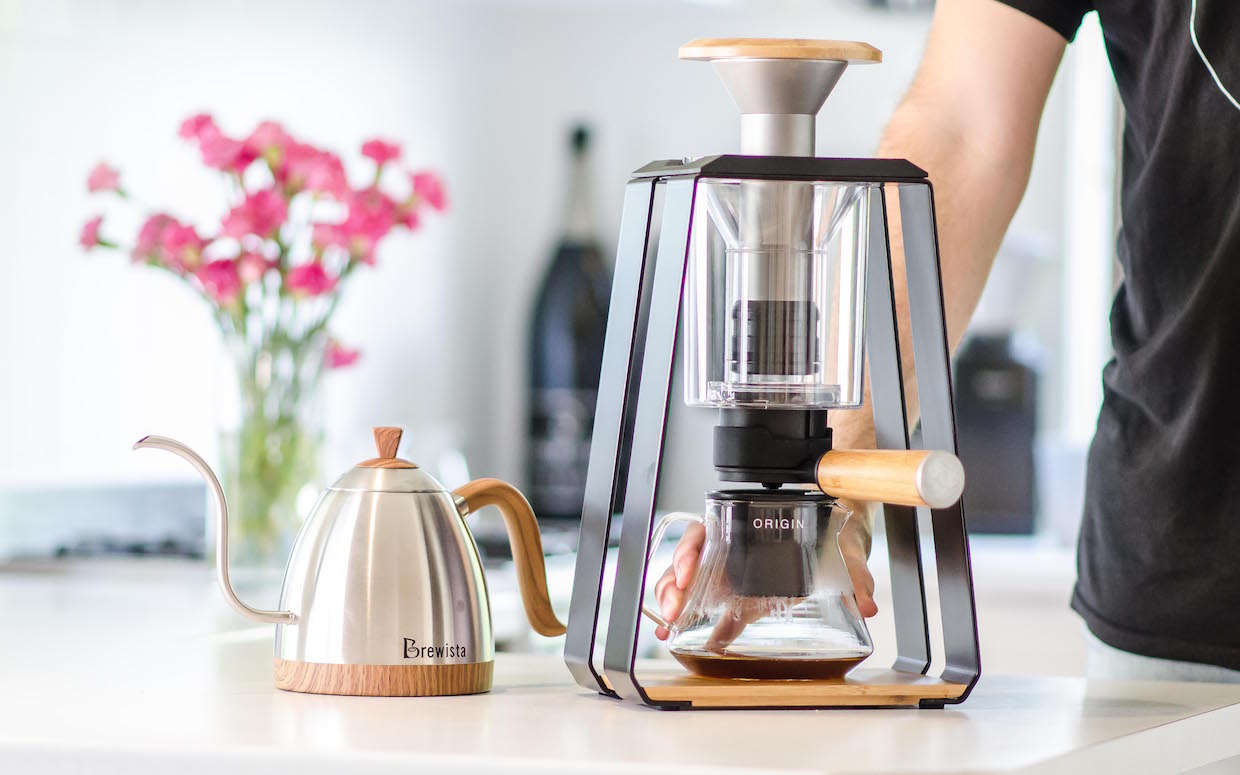 The matte black version of the Trinity One.

The Origin Decanter is essentially a glass pourover brewer and vessel combo that accepts Kalita 155 flat-bottom, fluted paper filters. Without the filter-holding module, the decanter alone holds 750 milliliters when filled to just below the spout — a handy capacity for decanting wine. With the filter module in place, the vessel’s capacity is 500 milliliters, or roughly one to two finished cups. 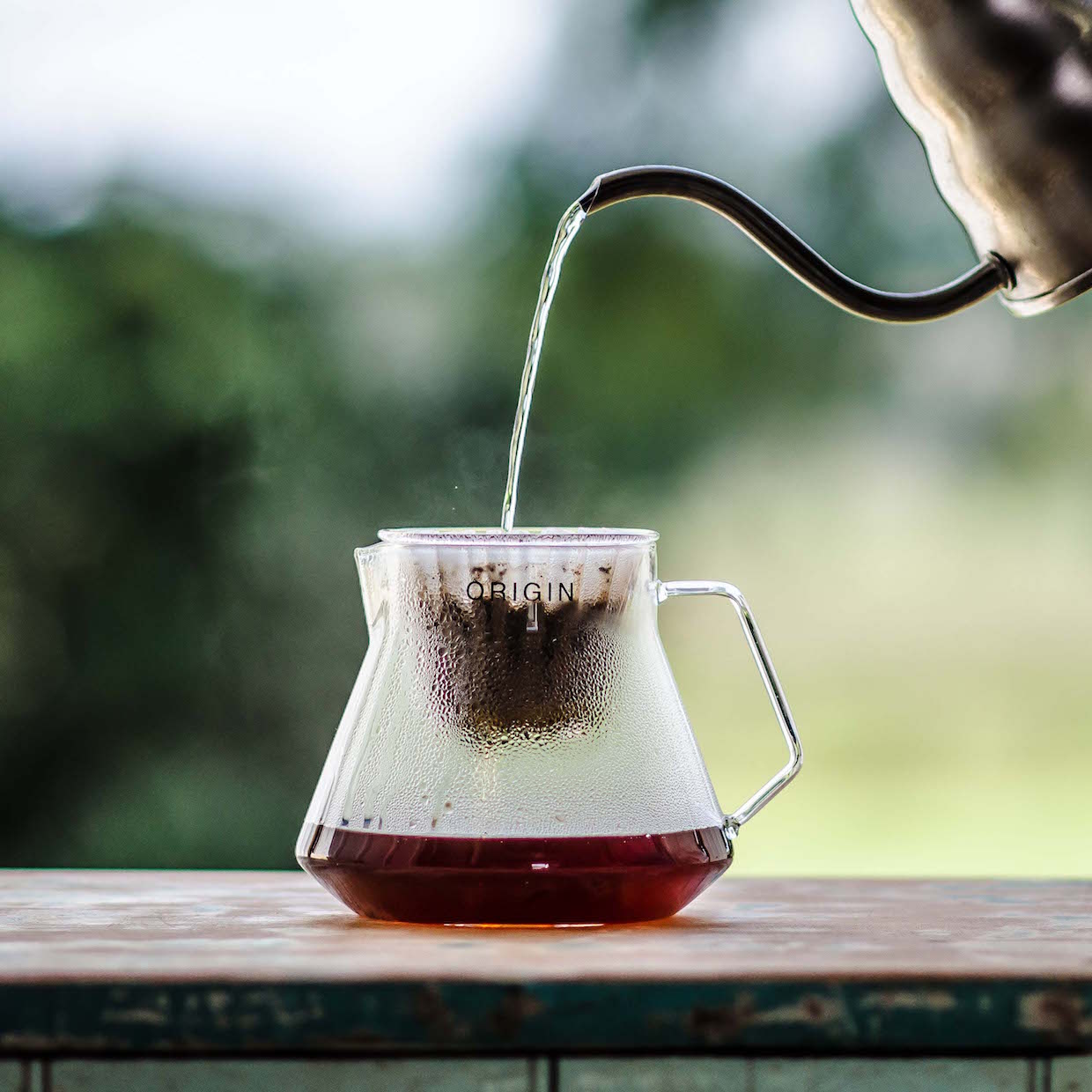 Filter modules for the Origin are available either in transparent glass, black ceramic, or stainless steel, offering various options for aesthetics and heat retention. The angle of the handle, the vessel walls and the base are intended to echo the geometry of the Trinity One brewer, under which the Origin can be placed for what Folker described as “hands-free” pourover functionality. Water makes its way through the Trinity for easy and even distribution upon the coffee bed. The Trinity One can also be adjusted to release slow drips for cold brewing in the Origin. 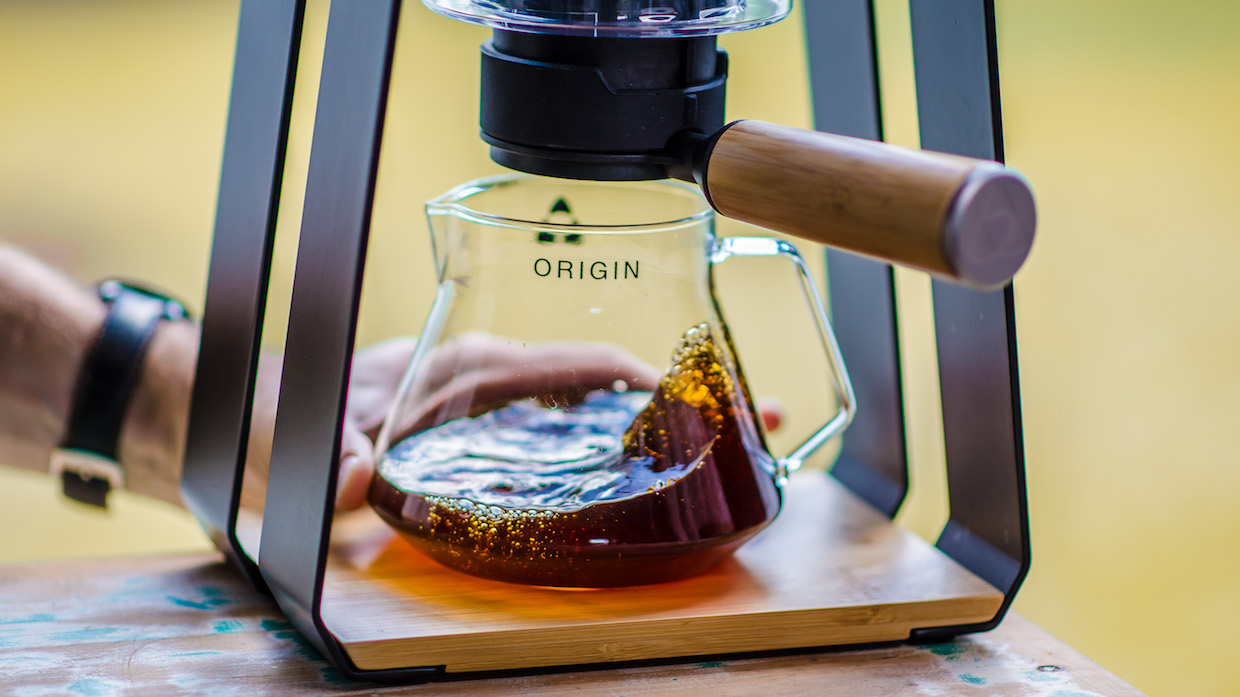 The nested design of the filter holder within the Origin vessel — as opposed to other pourover devices that are perched on top — is designed to emphasize the minimalist aesthetic what also reducing thermal loss during the brewing process. 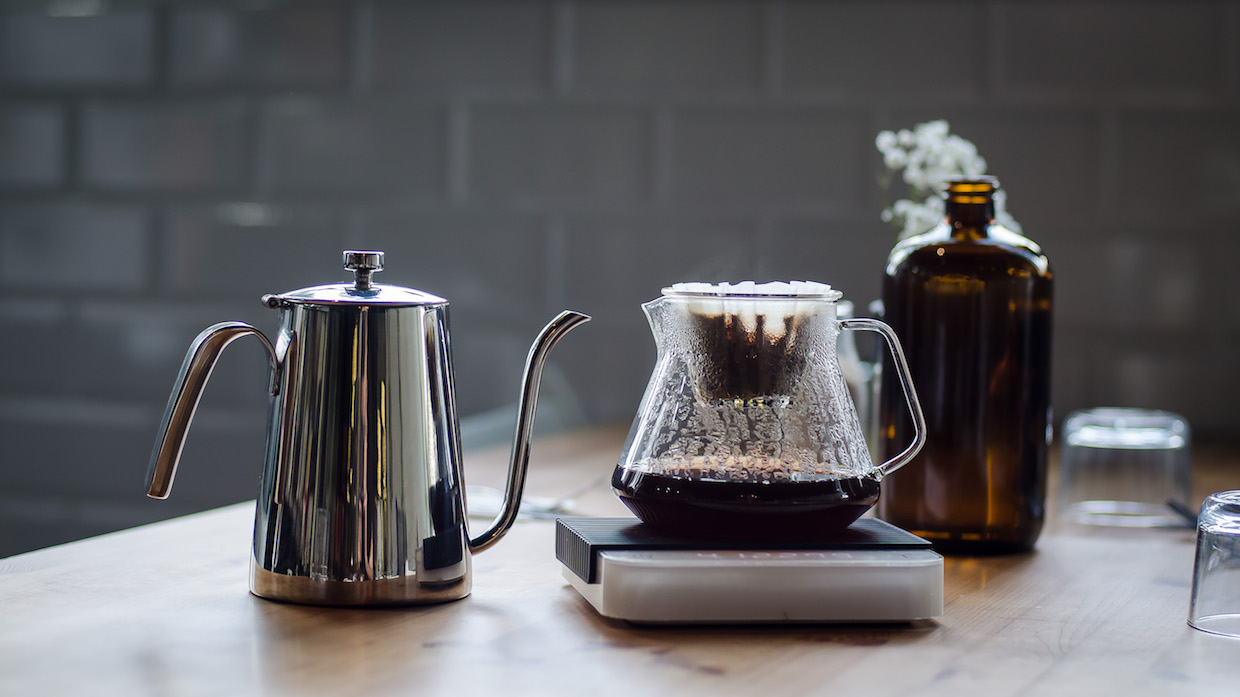 Variable flow control and customizable brew channeling patterns are provided through a system of “grid seals” — small silicon plugs that a user can arrange to block any number or pattern of the 21 drain holes at the bottom of the Origin filter module.

“Admittedly the silicone seals are a bit fiddly to set up initially — you literally push them into the drain holes like Lego,” Folker said. “But once your flow pattern is set up, you won’t need to change it or remove plugs very often unless you wish to experiment regularly.” 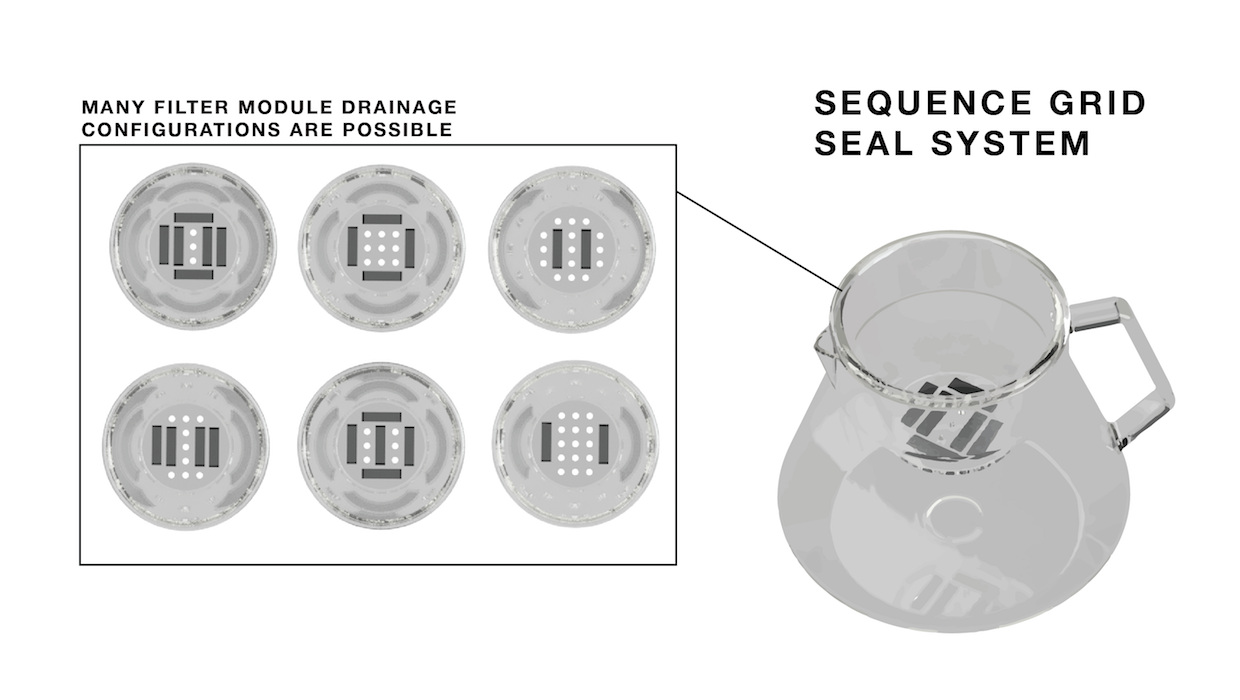 Production of the Origin Decanter is already underway, with shipment slated to begin next month. A Kickstarter campaign for the product has already earned more than 300 percent of the funding goal. Folker said that if demand is there, a larger version of the Origin could come next, among other new project ideas that aim to transfer the consistency and ease of the weighted Trinity One gravity press to other brewing formats. 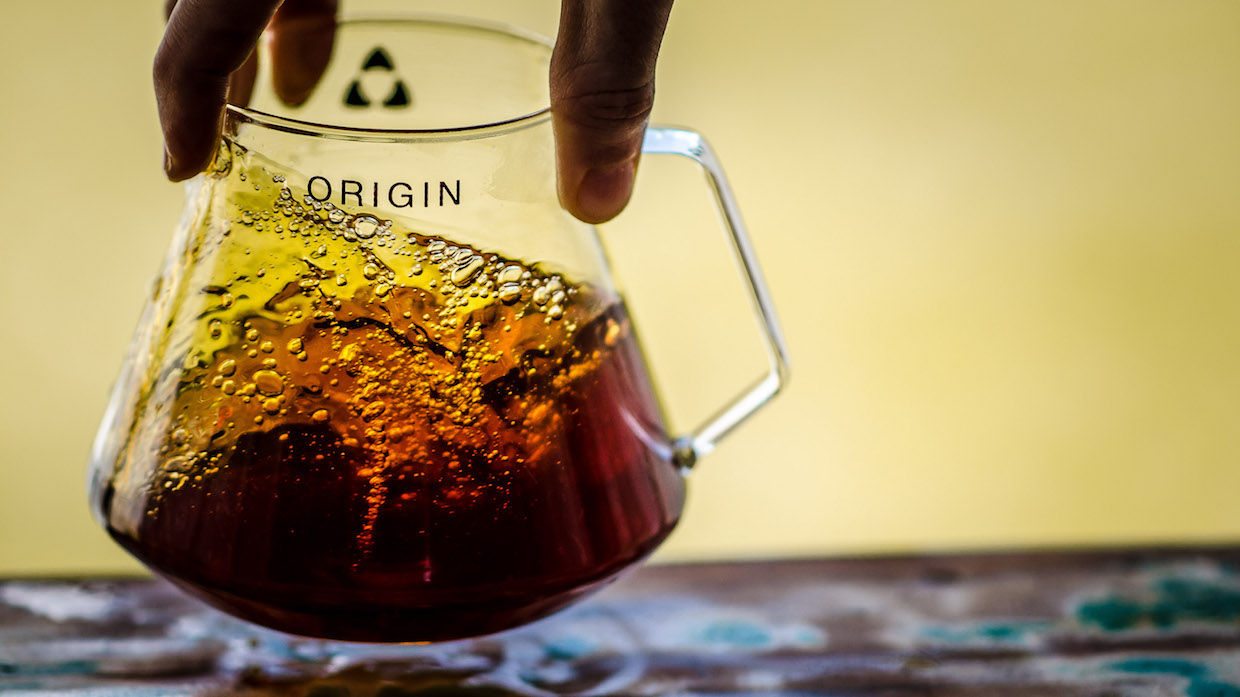 “I’m working on a product that might offer similar advantages in the pour over space — that is, hands free and consistent, without a hefty price tag that fully automatic systems demand,” Folker said. “Through our products, I hope to offer solutions to the problems which continue to be problematic for the coffee industry — the main issue being brewing consistency, but also the problem of high amounts of manual input and labor intensity requirements that prevent many cafes [from] being able to offer filter without investing a lot of capital into a fully automatic solution.”