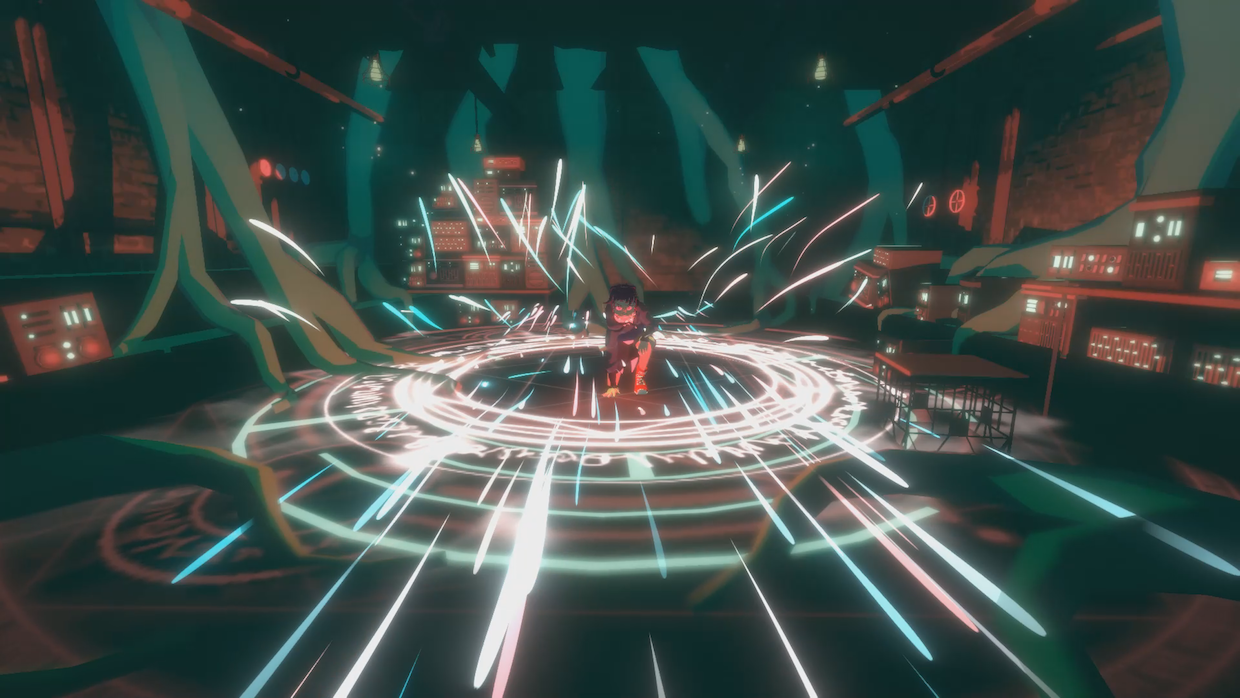 Are cafe-themed videos games the new coffee soda? Last week an odd one popped up, and a second has bubbled to the surface this week called Necrobarista, set for release next year by Australian game designer Route 59. In it, a colorful cast of the un-dead return to an Australian coffeehouse for an “Alchemical” cuppa, according to NintendoLife:

In a magical Melbourne cafe, the dead have returned for one last night and one last cup of coffee. In this cel-shaded visual novel and adventure game hybrid, players are asked to take a break and enjoy a hot drink with a host of colourful characters – both living and dead. Dynamically-shot story vignettes set the scene, before allowing you to explore a supernatural setting in greater detail with 3D point-and-click adventure sessions.

Not only are Aussies cultivating video games about coffee, they’re actually growing real coffee now, in real life. One recent trial of coffee grown on the Australian territory Christmas Island yielded about a bucketful of cherries that were processed and roasted in 50-gram batches in a popcorn popper, with promising results reported by ABC:

A taste-testing session of the first locally-produced coffee was held for a small group at the home of Christmas Island’s administrator, Natasha Griggs, in late July.

Mr Gan said while it may not compare to a coffee you would get at the ‘top end of town’ in Perth, he found the brew very satisfying.

“As a first attempt, the coffee did taste really good,” Mr Gan said. 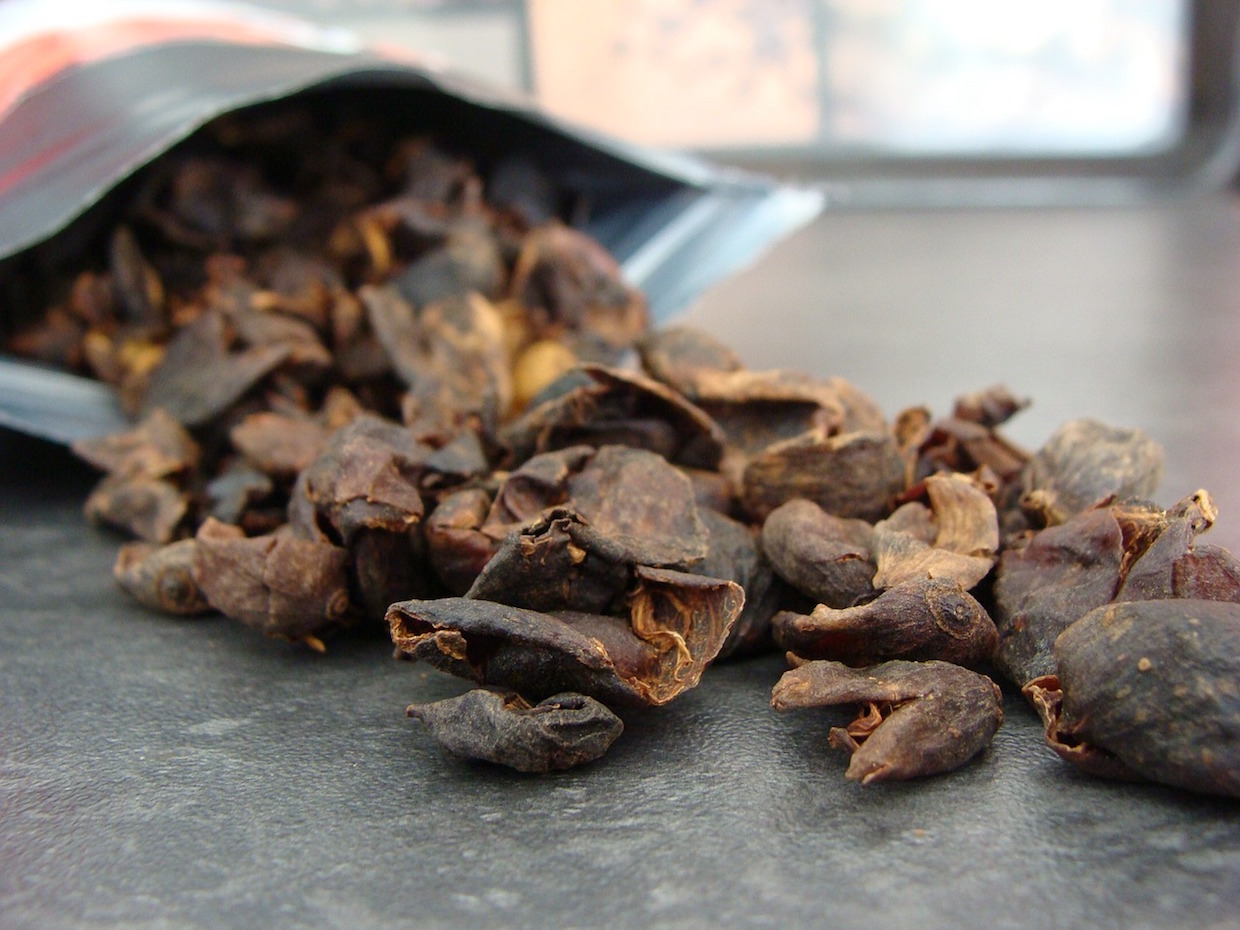 Hopefully they didn’t compost the fruit husks, because a doctor who chatted with PureWow revealed how healthy cascara can be for your brain:

According to research from registered dietician Dr. Megan Colletto, it increases brain-derived neurotrophic factor (aka BDNF). “BDNF is a neuro-super protein responsible for aiding in your body’s ability to grow new neurons and repair broken ones, helping you learn faster and remember better.” BDNF has been studied as a defense against depression, diabetes and heart disease, as well neurodegenerative disorders (like Parkinson’s and Alzheimer’s).

Now imagine what incredible health you’d be in if you chugged cascara brew while riding a bike. Japan Times took a look at the overlap in cycling and coffee culture in Tokyo, where, just like in the States, the two often fit together like a gear in a chain:

A few stops away from Trex on the Ginza Line, in the Gaienmae area, Ratio Coffee & Cycle also combines cycling and coffee. Opened in 2015, the shop is an experimental collaboration between Bridgestone Cycle and Tokyo-based Onibus Coffee. Not only does it serve the full range of Onibus’ high-quality coffees, it carries a variety of made-in-Japan cycling accessories and even allows you to customize (from scratch!) your own Neocot city bike — a Bridgestone-Ratio & C exclusive. 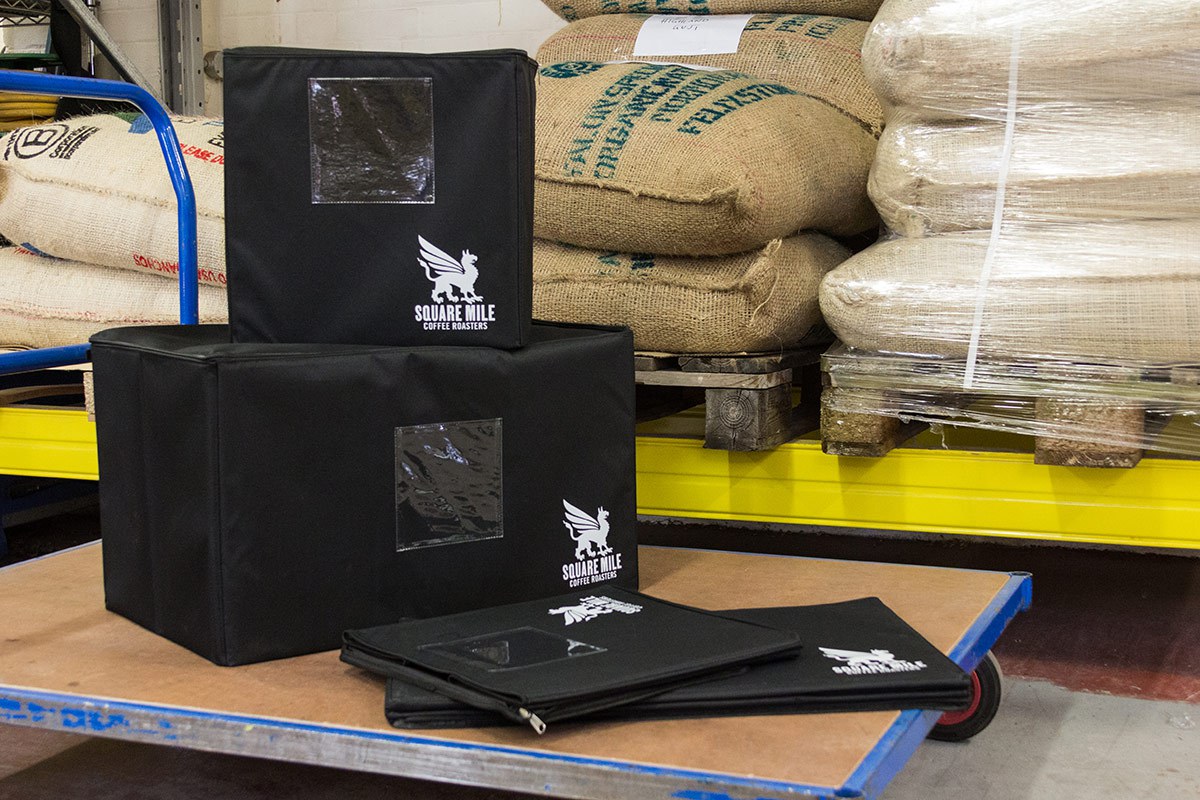 While fitness is great, cyclists often also love pointing out how much better for the environment it is to travel by bike than by anything with a motor. Environmentalism has also been a priority of London’s Square Mile Coffee Roasters lately. The company has recently introduced Notboxes, collapsible, reusable fabric boxes for use holding deliveries instead of cardboard. According to Square Mile:

After running a trial with a pair of cafes to test the boxes, we’re thrilled to roll the program out to a broader audience of between 20 and 40 of our accounts, meaning your local Square Mile cafe can now start receiving deliveries in Notboxes.

From our testing so far, we expect to get between fifteen and twenty uses out of each Notbox. To put that in context, for a 30kg delivery of coffee to one of our accounts, we’d typically use 2.52kg of cardboard packaging. That means that even at the lowest end of our durability expectations, each box would replace over 37kg of cardboard in its lifetime! 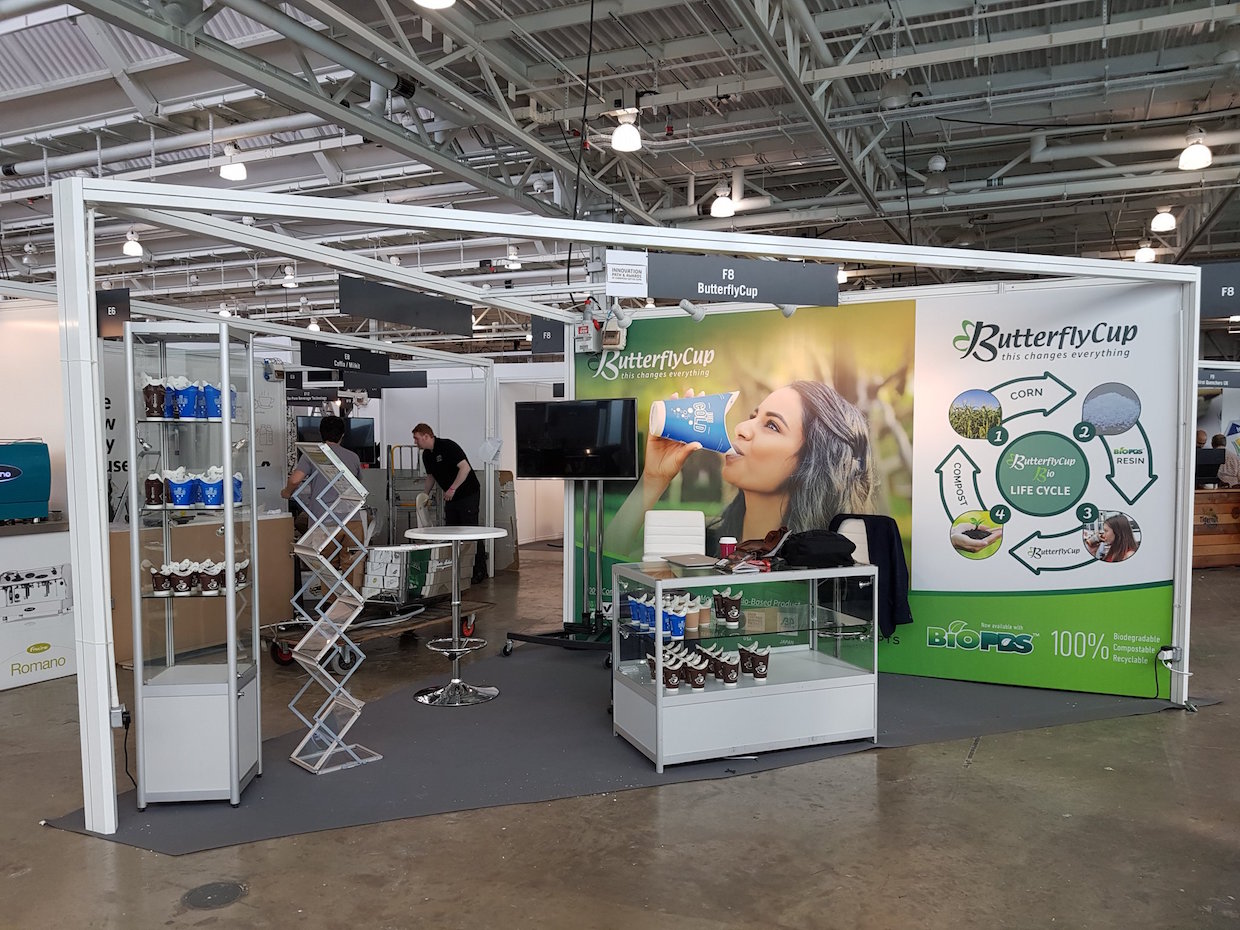 In some cases, though, cardboard might still constitute an improvement over alternatives. That appears to be the case with Butterfly Cups, the Overall Winner of this year’s European Coffee Expo Innovation Path and Awards. The South African reported this week that the Ireland-made Butterfly cup has fluttered into the South African market:

The Butterfly Cup from Ireland is 100% compostable and recyclable.

According to Chilla.com, the Butterfly Cup is the first lidless cup ever created. It comes in all sizes, available in PE Lined and Bio PBS options, hot and cold options and can be branded according to the specifications of the retailer.

The cup is said to be easy-to-use with no splashes, leaks or drips and is eco-friendly, cool and trendy.

Keeping track of so many new eco-friendly cup ideas can be as exhausting as riding a bike, and coffee might not be able to perk you back up again if you also happen to be dehydrated. This and other likely reasons coffee sometimes leaves you feeling sleepier than before were discussed by University of Sydney sleep researcher Assoc. Prof. Chin Moi Chow in a Coach Nine piece:

“If you’ve been awake for a long period of time, you accumulate high levels of adenosine and that makes you sleepy. But when you consume a cup of coffee, these receptors get blocked so you don’t feel the sleepiness any more and you become alert.”

But caffeine doesn’t stop the production of adenosine so it keeps building up even when you feel alert, waiting to bind to its receptors as soon as the caffeine wears off.

“Once it wears off, you become very sleepy again [as adenosine floods into the receptors],” Assoc Prof Chow says. 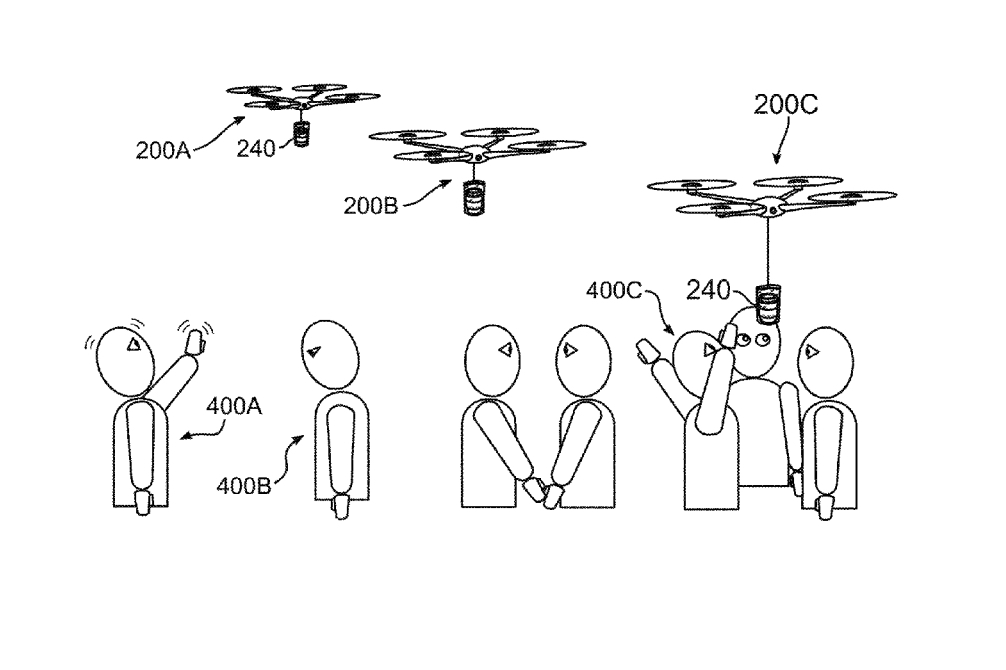 Luckily, if IBM makes good on the latest of its endless stream of patents, another coffee could be proactively, automatically delivered to you by a nearby drone once the hive mind notices you’re feeling sleepy. The Spoon had more about this crazy-but-not-impossible scenario:

That’s because IBM was issued a patent last week for a system that would deliver coffee via drone based on a person’s current mood or cognitive state. The patent, called “Drone delivery of coffee based on a cognitive state of an individual”, utilizes sensor data and other indicators to know when a person is sleepy.

According to the patent, data from wearables, cameras and analysis of past behavior could be used to determine “sleep cycle, bed time for the last N days, a joint measure of the characteristic for two people (e.g. husband and wife), and current blood pressure, or heart rate.” The patent also describes utilizing contextual information like a person’s calendar to determine whether they’re in need of additional alertness. Have a meeting that morning? Keep eye out for coffee drone!

That’s got to be better than whatever the army’s been doing with its drones. Then again, the armed forces consume a lot of coffee, so they’ll probably cover all these bases themselves. If you’re curious which companies’ coffee would most likely wind up in said drones, Military Times this week ranked U.S. bases by their coffee consumption and reported on the military’s biggest coffee suppliers: 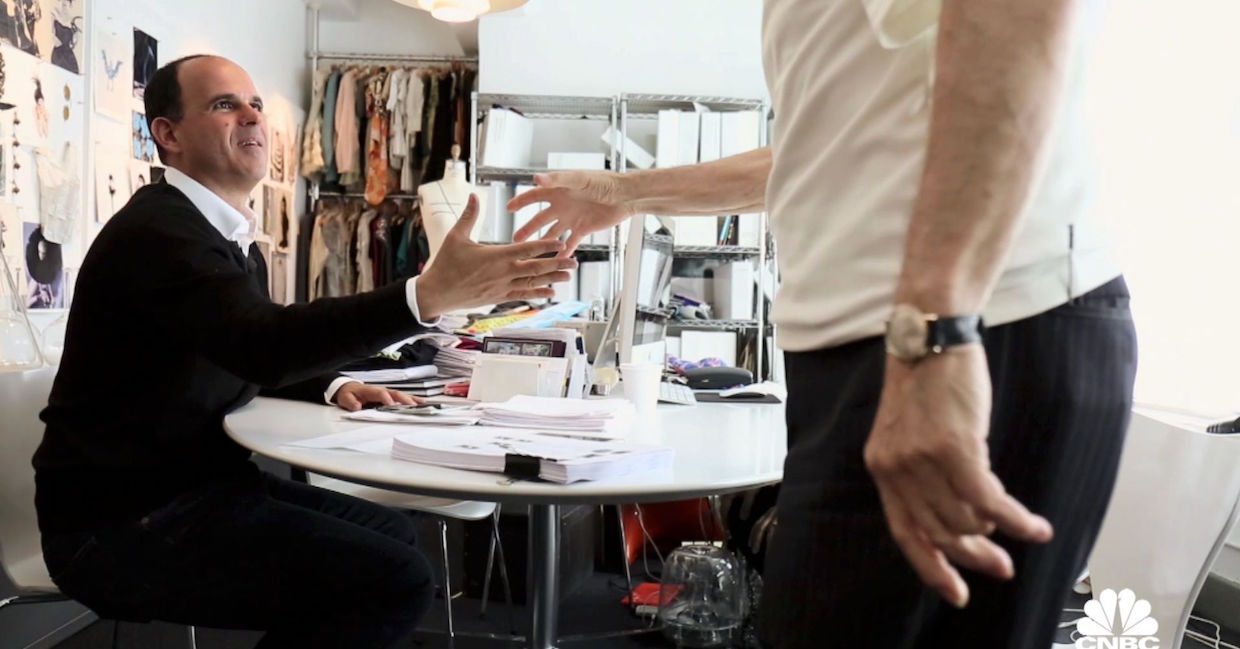 It would be nice if coffee delivery is all the military ever needed drones for, but alas, they have a dark side. Similarly, an exclusive report by Inc. this week revealed that Marcus Lemonis, host of host of CNBC reality show “The Profit” and a partner in Red Beard Coffee Traders, also may have a dark side:

But it turns out there are at least as many founders who say dealing with Lemonis, or being on his show, has damaged them. Inc. spoke to 20 such small-business owners. Some feel they were exploited to make entertaining television, while others allege Lemonis took advantage of their lack of business savvy and weak financial positions for his own monetary gain, acting more like a callous private equity investor than a small-business savior. Most of those who spoke to Inc. did so on the condition of anonymity because they had signed a nondisclosure agreement with CNBC and the show’s production company, Machete, which threatens a $1 million penalty for breaching the confidentiality terms.

In the past five years, Lemonis has been involved in at least six lawsuits, three of which have stemmed from his deals on The Profit. In those three cases, business owners and investors allege a range of misdeeds: breach of fiduciary duty, breach of contract, breach of good faith and fair dealing, fraudulent inducement, unjust enrichment, shareholder oppression, and tortious interference with a business relationship.

That’s a lot of acrimony, although sometimes when warring factions are going at it, an unlikely third-party winner can emerge. The Los Angeles Times covered an interesting example of this in how the longstanding tensions between China and Taiwan have everything coming up roses for a small but subsequently rapidly growing Honduran coffee importer, Elias Rivera’s Zircle Coffee:

Honduras is one of just 18 countries that recognize Taiwan as an autonomous nation, a fact that gives entrepreneurs such as Rivera preferred status here. Though Honduran coffee beans are relatively new — and a bit on the strong side — to Taiwanese cafe operators, Rivera is exempt from the steep tariffs usually slapped on importers and the government happily lets him attend food shows and coffee expos free of charge. Even getting a visa turned into a painless process.

“Taiwan has created a friendly and flexible business environment for us to operate,” Rivera said.

Coffee has been being grown in Australia for years.