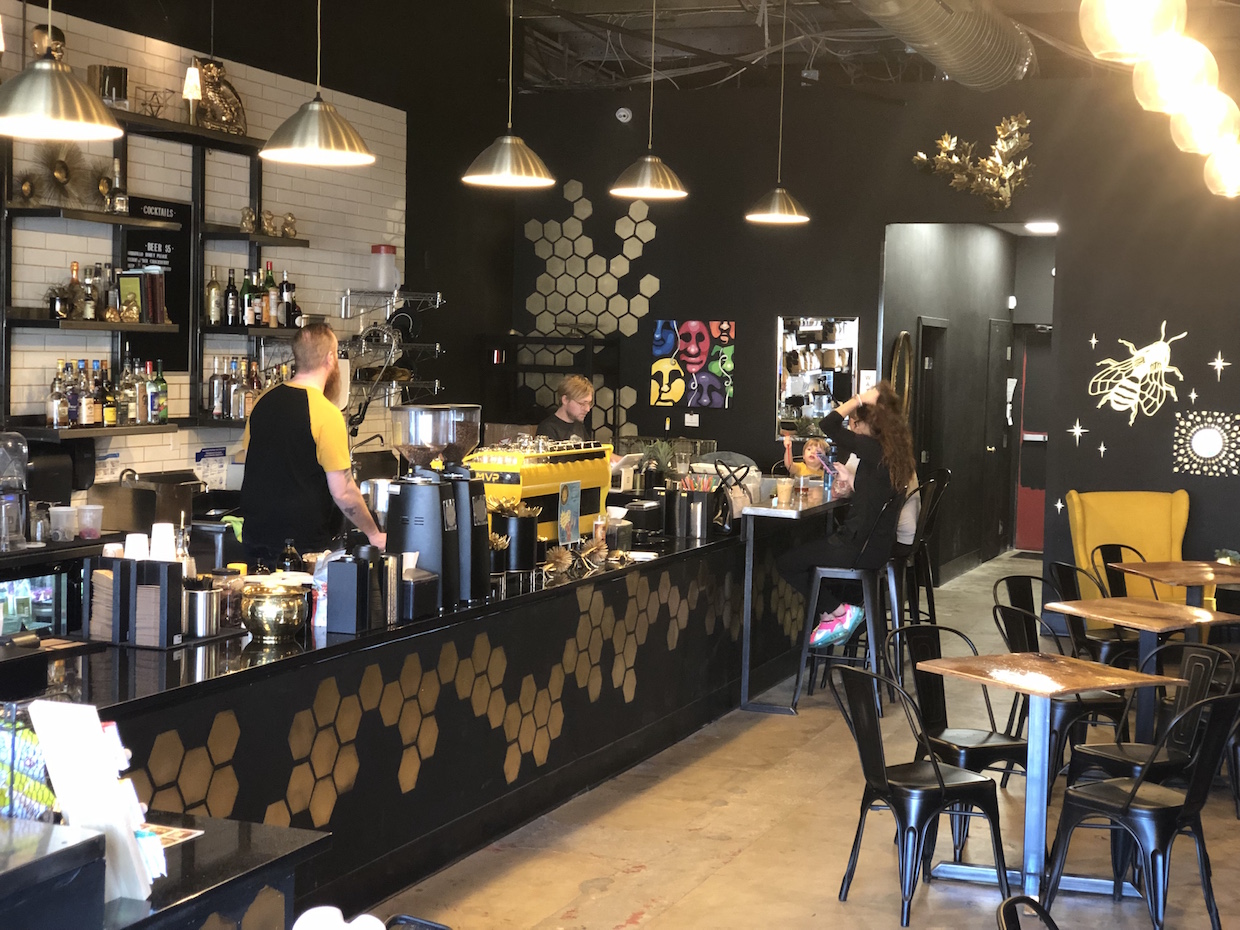 The coffee scene in Denton, Texas, got a whole lot blingier recently with the opening of Golden Boy Coffee Co., a barista-founded shop whose interior is only the most visible nugget of its commitment to casual style and serious drink craft.

The multiroaster coffee-cocktail concept is the product of an ownership team whose shaker of professional experience blends deep coffee skills on one hand and an extensive entrepreneurial career on the other. Both owners both have strong backgrounds as baristas, having met each other on the staff of Ascension Coffee in Dallas.’ 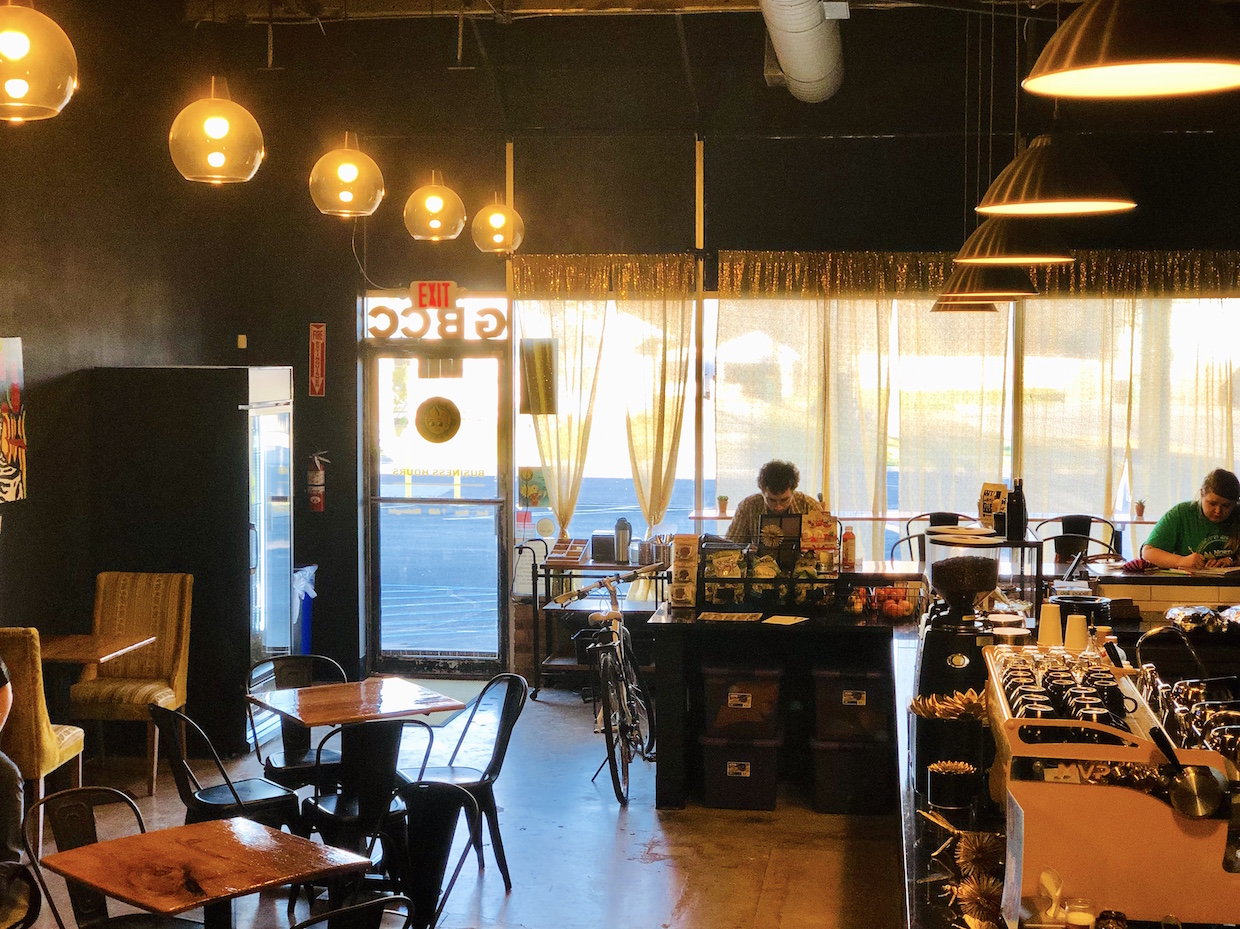 Golden Boy Co-Owner Andy Cunningham told Daily Coffee News he wore a variety of hats at Ascension, including as lead coffee tech and trainer, working closely with Roaster Aubrey Warden to dial in the company’s coffees, and helping the company expand to seven locations. Cunningham also worked closely with Ascension Coffee Owner and Head Roaster Russell Hayward in running the Rwanda Booth at the SCA Expo for two years.

“Helping to showcase all the amazing coffees coming out of Rwanda was definitely one of the highlights of my coffee career thus far,” said Cunningham. “Russell Hayward really took me under his wing and mentored me into the coffee guru that I am today.” 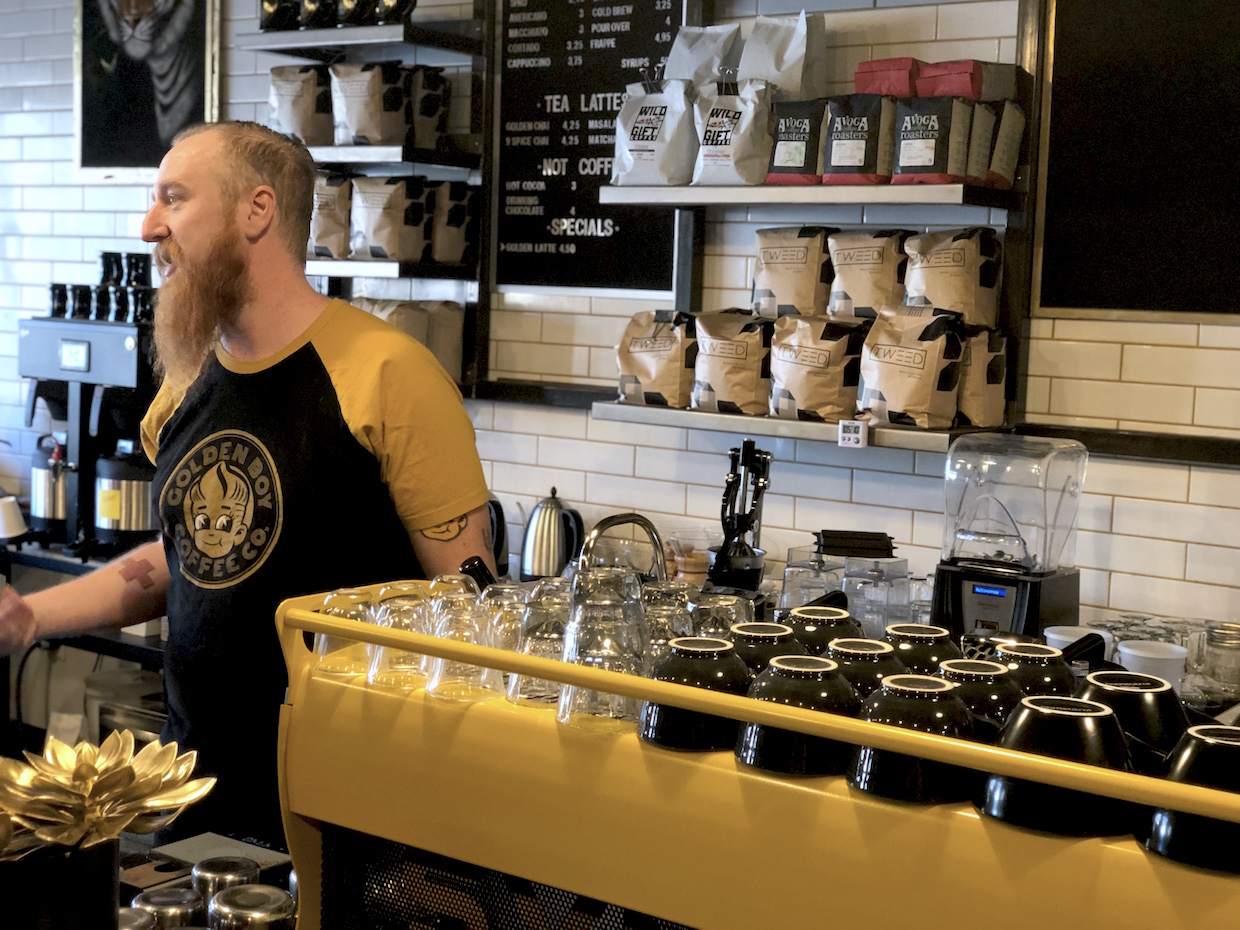 Golden Boy Co-Founder Trey Suire, meanwhile, has successfully launched and operated various businesses in fields such as landscaping, agriculture and personal fitness. He’s also a licensed contractor, which came in handy during the Golden Boy build-out. The resulting interior contrasts black walls, surfaces and chairs with white subway tile on the back wall, and various golds and yellows throughout, aiming for a balance between daytime coffee and evening cocktail appeal.

Cunningham, who painted the shop’s honeycomb-like hexagon patterns on the counter and walls himself, said he and Suire worked 16-hour days on the floors, paint and other areas. 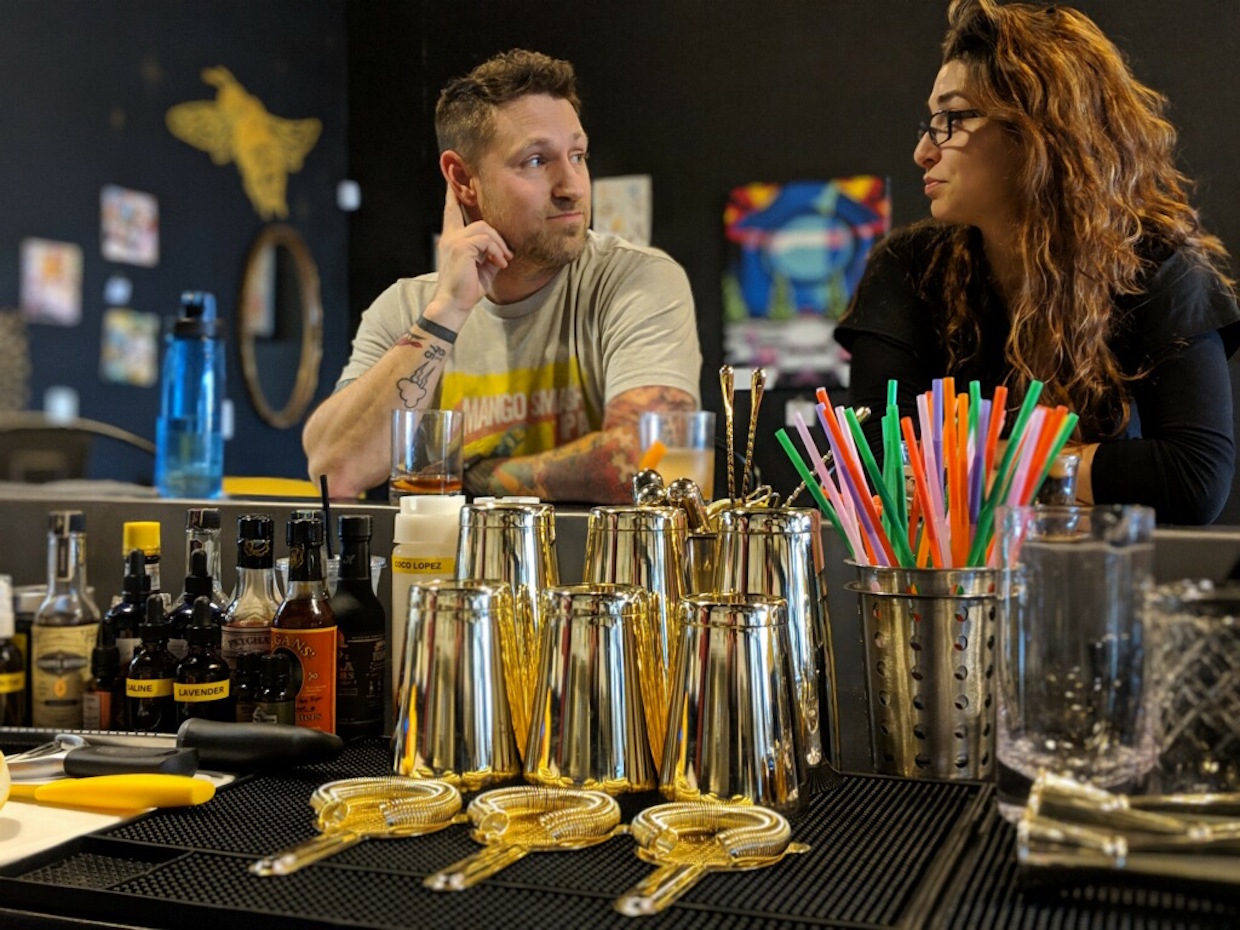 “The buildout was honestly not that bad,” said Cunningham. “I’ve helped other coffee companies open up 12 shops all over Texas, so I was prepared for the worst. Honestly the city of Denton has been so excited to have us here that the city worked with us really hard to ensure we have everything we needed to accomplish our ‘Golden’ dream.”

Costs were kept under control as family and friends donated their skills and labor. Said Cunningham, “We kept our construction budget low, so that we could dump all of our money into equipment.” 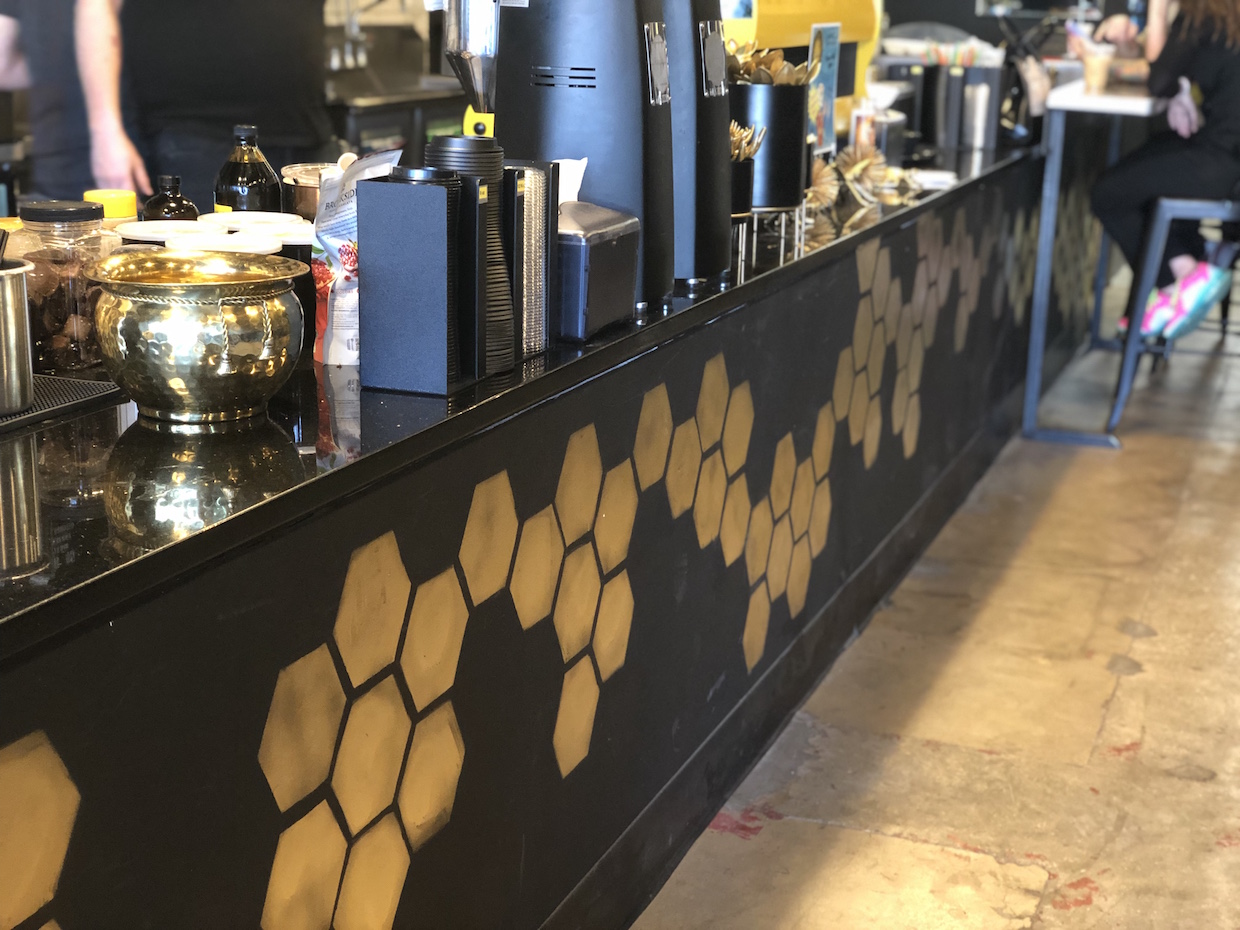 Dallas-based Tweed Coffee Roasters is the ongoing bean provider for a coffee program that also currently features Lemma Coffee Roasters, a fellow Denton company. Future offerings are slated to include beans from Evocation Coffee out of Amarillo, Austin’s Wild Gift, and from Houston, Xela Coffee Roasters. 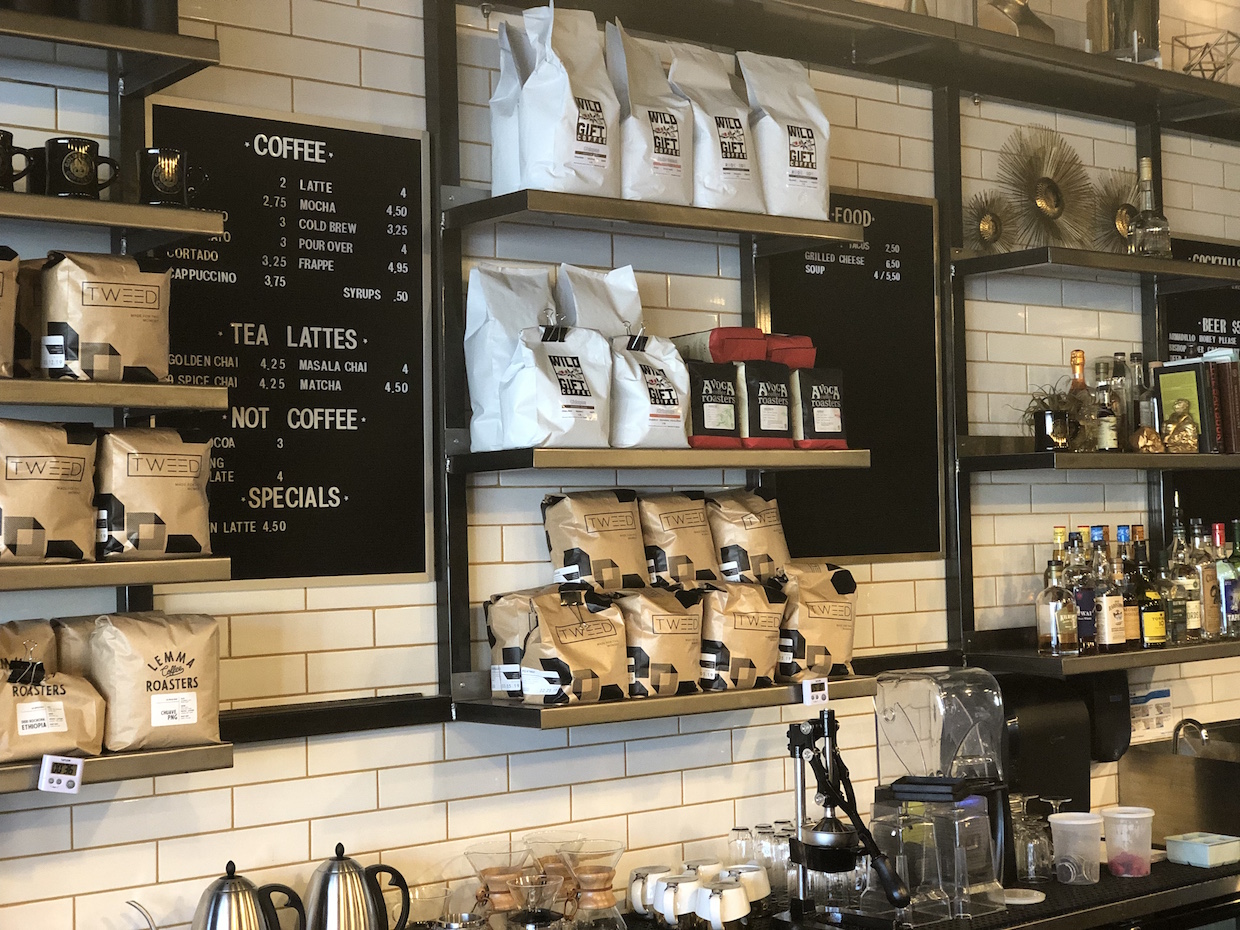 “We have a strong connection with Texas roasters, and one of our plans is to showcase only Texas roasters,” said Cunningham. “We try to source ethical coffee from companies that share the same general ideas that we share: Take care of the farmers; take care of your employees; and great coffee will happen on its own.”

The Golden Boy alcohol program overlaps with the coffee side for offerings such as an oat-milk-based punch topped with an espresso floater, and what Cunningham describes as “a legit Irish Coffee,” featuring a Tweed-roasted coffee from Burundi paired with Kilbeggan rye whiskey, house-made demerara simple syrup, fresh whip cream and nutmeg. 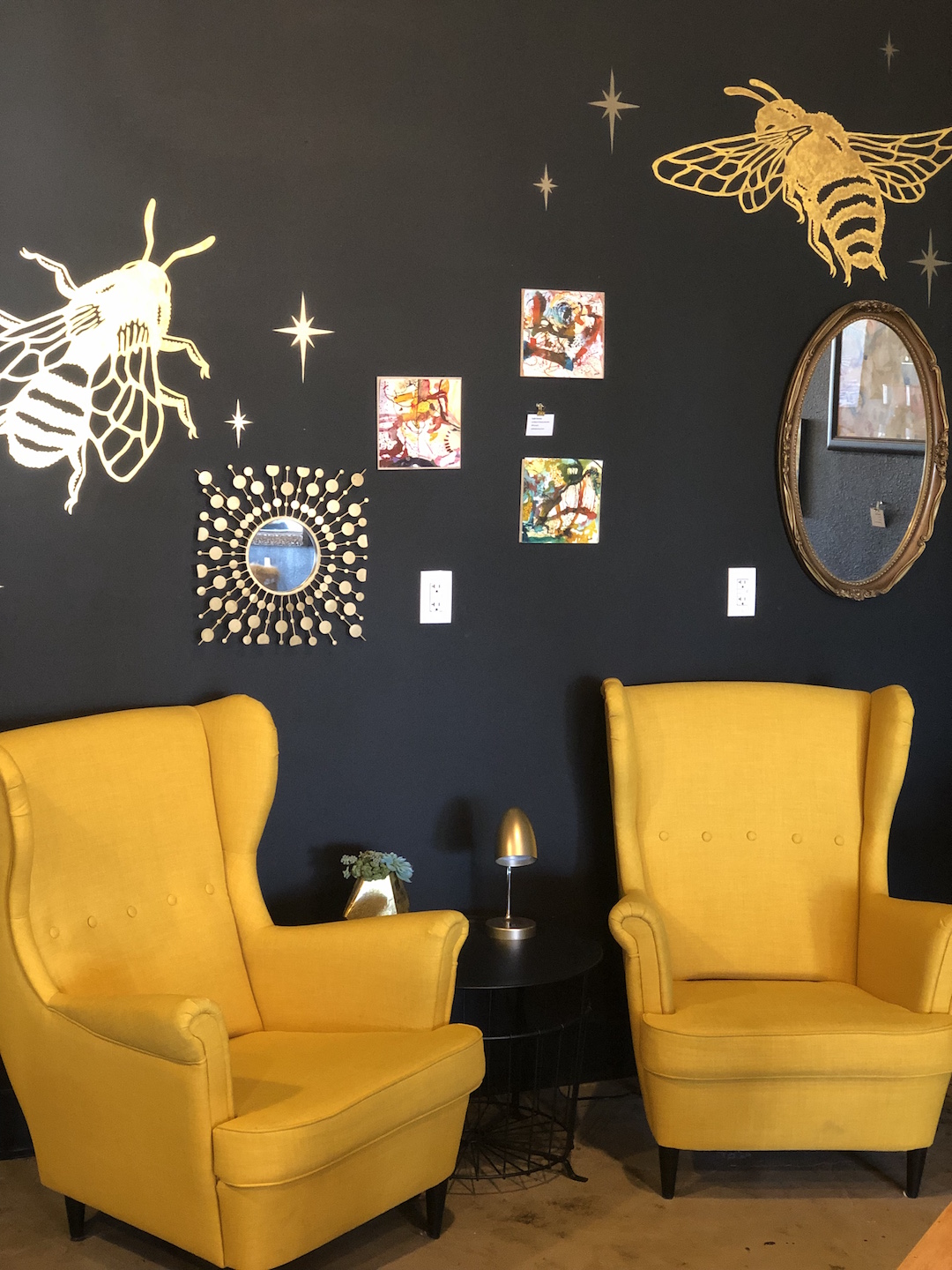 Cunningham said Golden Boy’s success since opening last month is providing solid encouragement towards plans for expanding to multiple locations. The search for the second spot has already begun, and the intention is to make each Golden Boy location unique in some way, be it through coffee, food or alcohol. 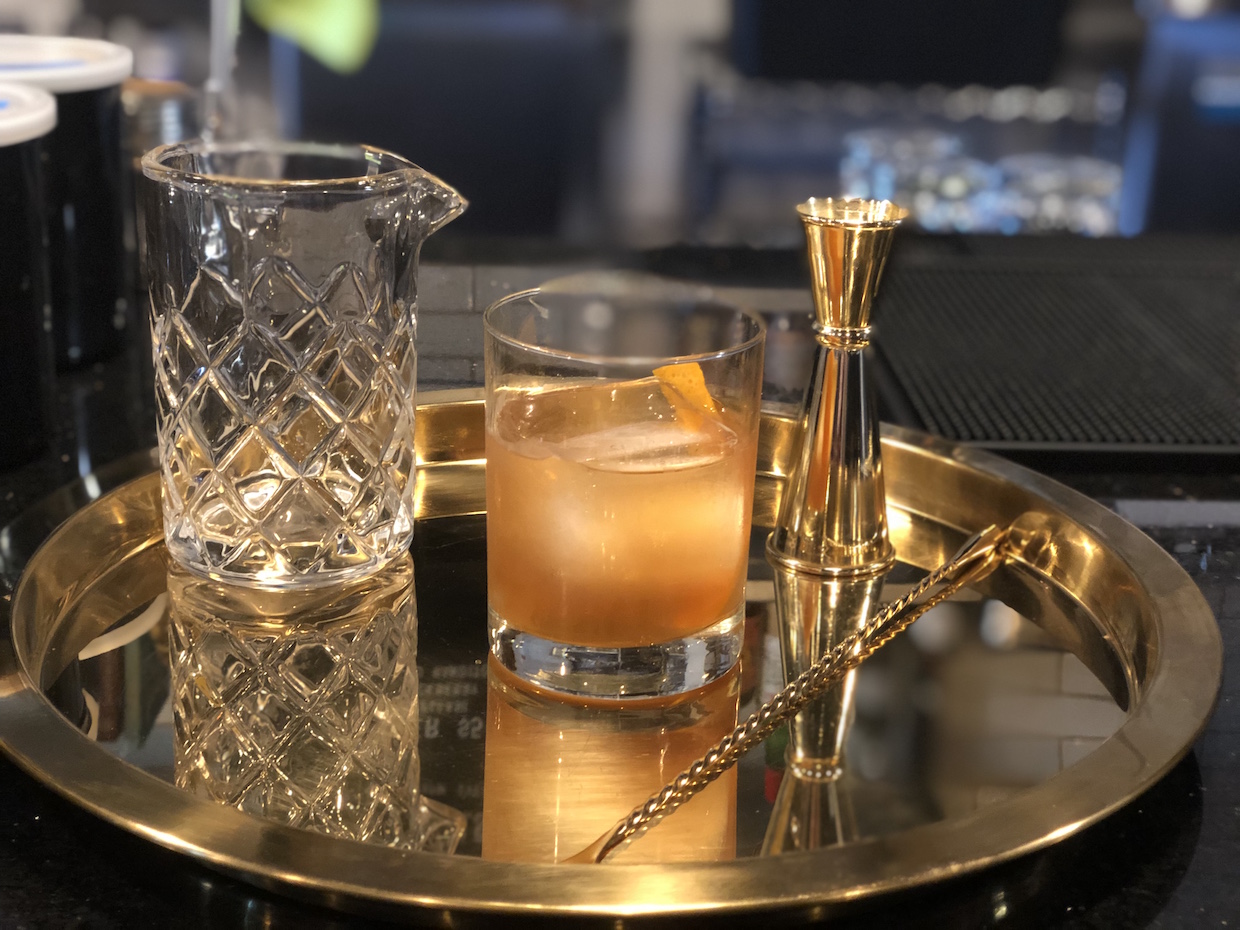