Collaboration Coffee Pulls It All Together in Yakima, Washington 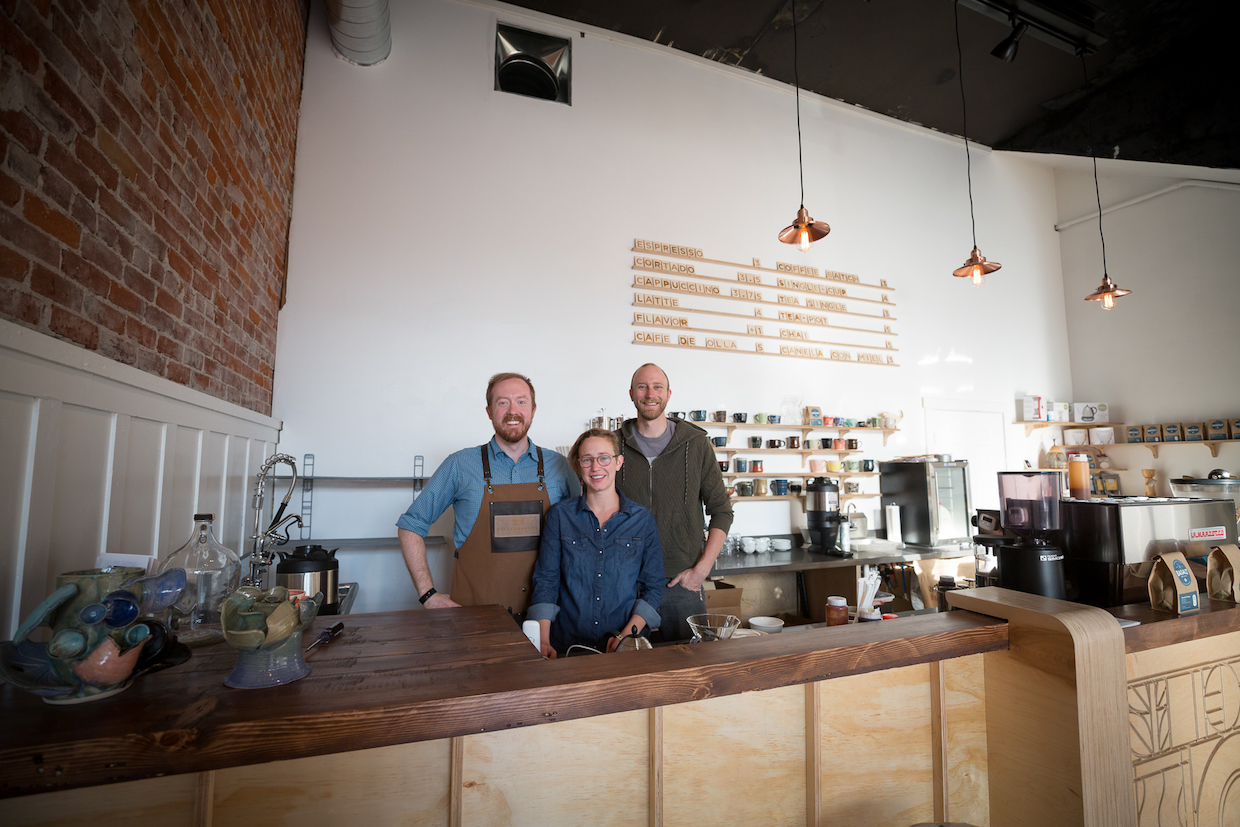 In Washington State’s fertile Yakima Valley, Collaboration Coffee has given new life to the former art gallery of the Yakima Maker Space. The coffee shop, which opened in April, includes a reimagined gallery component that keeps the local artistic vibe alive, though coffee now provides the frame.

The Collaboration Coffee shop is a natural offshoot off Yakima-based Basalt Coffee Roasters, which shares several of the same owners. It offers a simple, coffee-forward menu — with only chocolate and caramel syrups available, both of which are crafted by other small businesses in town — and pastries from local panaderia Viera’s Bakery & Deli. 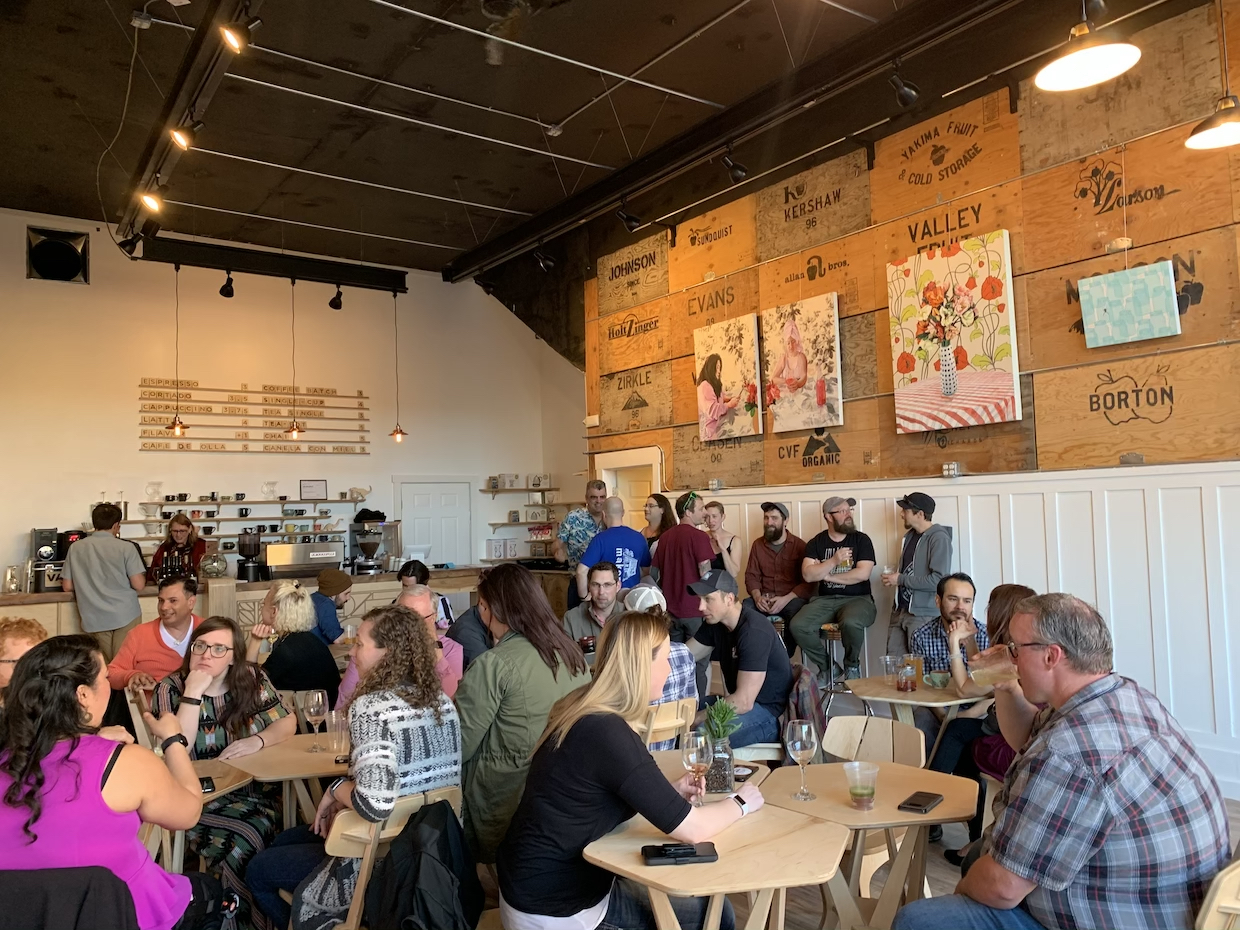 General manager Adam Wilson says that the big picture relationships in coffee were a big part of what inspired the new retail brand’s name.

“I love to talk about the people involved in making coffee, and it’s very close to my heart to honor all of the hard work of all of the people involved, from pickers to baristas,” Wilson said. “There’s no such thing as doing coffee by yourself — it’s always a collaborative effort between a whole bunch of people, and that idea is deeply inspiring to me.” 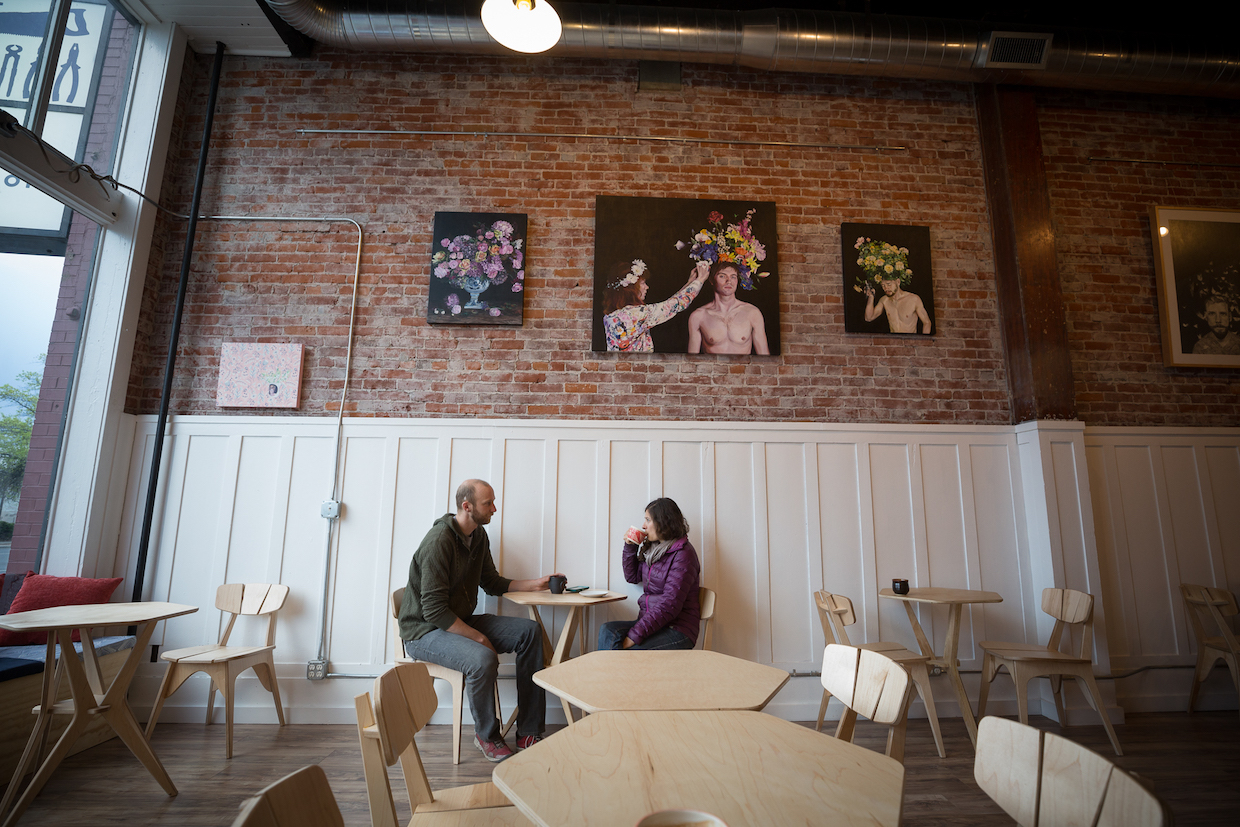 “I’m really interested in and passionate about doing coffee well from start to finish, including everything from espresso prep techniques to trade relationships to farm-level sustainability,” said Wilson, who studied agriculture economics in college and wrote his Master’s thesis on the Cup of Excellence program, and worked for Thrive Famers selling green coffee to specialty roasters for several years. “Being involved with Basalt Roasters provides a pretty cool opportunity to do that, as I’m both in the lead at Collab and focused mostly on sourcing for Basalt. It’s super fun to serve coffee across a bar that was grown by people I’ve been working with for years in some cases.”

Wilson, who owns Basalt along with Joshua and Maddie Hicks, said they were approached by two board members of the Yakima Maker Space back in November with the prospect of opening a retail bar. The project ultimately led to starting the creation of the new company, Collaboration Coffee, which is now owned by Wilson, Maddie Hicks, and Nathan Poel. Nathan Poel is the co-founder and former president of Yakima Maker Space, and also a professional architect.

“We renovated our space, built the bar, built all the furniture, even did all the electrical and plumbing work ourselves,” Wilson said, noting that they were able to utilize the tools available through the Yakima Maker Space, a 6,000-plus square foot facility with a range of machines and equipment. 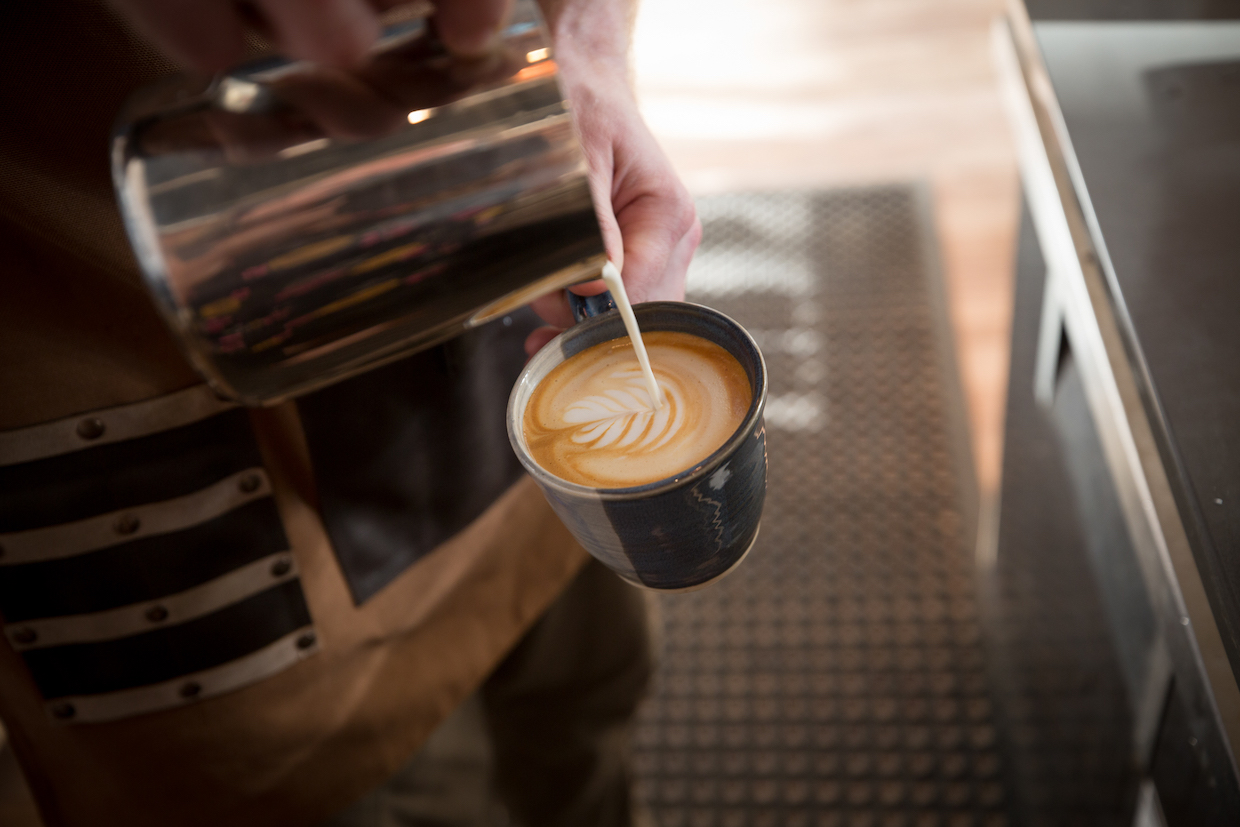 “We get to brag about all the different people who helped us build this place,” said Wilson. “Daniel helped the tables keep from wobbling. Amanda made that mug you’re holding. Buck painted the bathroom. Manny installed the door. Hannah did all that drywall. Didn’t Jake do a good job of that trim work? I’ve always believed that coffee facilitates relationships by some magical means that I’ve never been able to quite describe, and I hope we’ve created a space with our tables, the art, the windows, everything, that allows the coffee to work its magic on people and tie them together.”

The two large walls on each side of the shop are dedicated to rotating art galleries. Collaboration Coffee’s art director Maddie Hicks curates the galleries on a monthly basis, and organizes opening events for each showing. 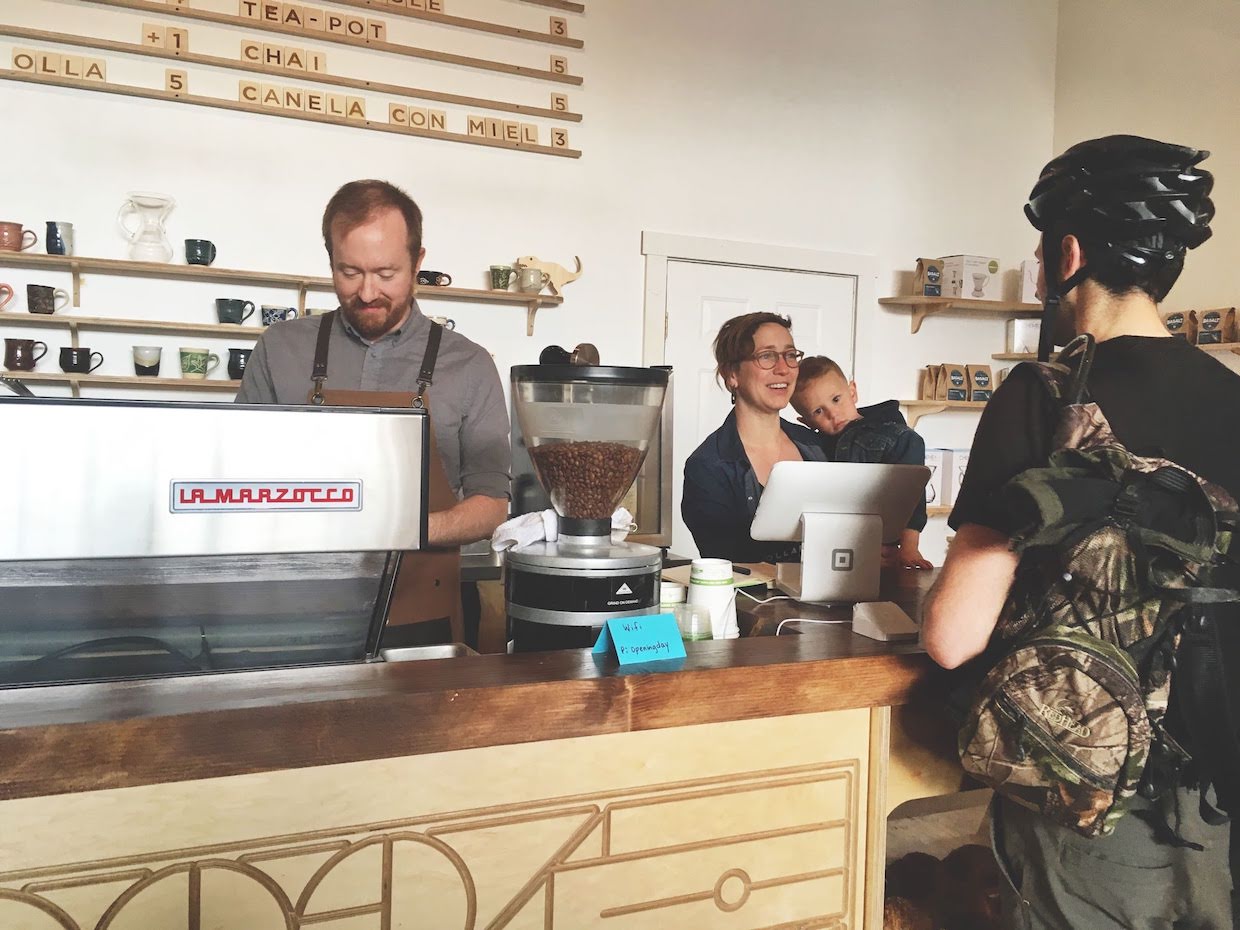 “Overall we wanted the space to feel very approachable, and very ‘Yakima,’ at least according to our dreams of what Yakima should look like,” Wilson said. “Our tables are relatively small — plenty of room for two people to have coffee, but not quite enough for two laptops. They’re hexagonal and link together quite nicely to create a bigger space to work. The modularity means we can change the location of the tables very easily and create new little spaces to follow our whims.” 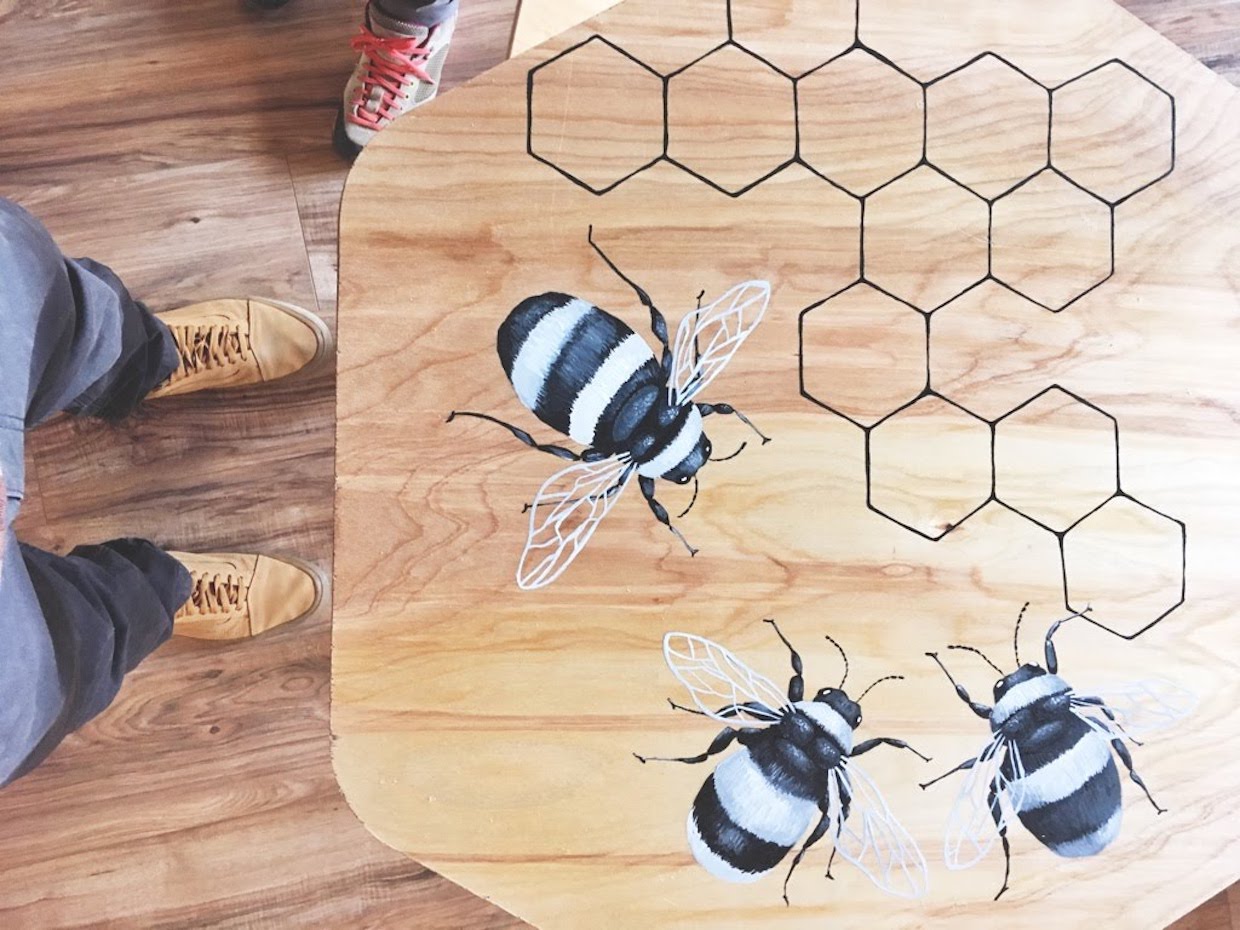 Inside one of the first buildings to be constructed in Yakima, in the early 1900s, the location gives nods to both the city’s long history, and to the promise offered by a community-focused cafe.

“For a bunch of reasons, downtown Yakima struggled through the ’80s and ’90s, and only recently is seeing a resurgence of restaurants and local businesses, and we’re proud to be part of that,” said Wilson. “There are only three places in Yakima now that most people would call a coffee shop, although there are dozens and dozens of coffee stands and a couple of bakeries that serve coffee parenthetically. That dearth of coffee shops is the biggest drive behind what we’re doing, and I think the reason we’ve seen such an immediate response from the community.”