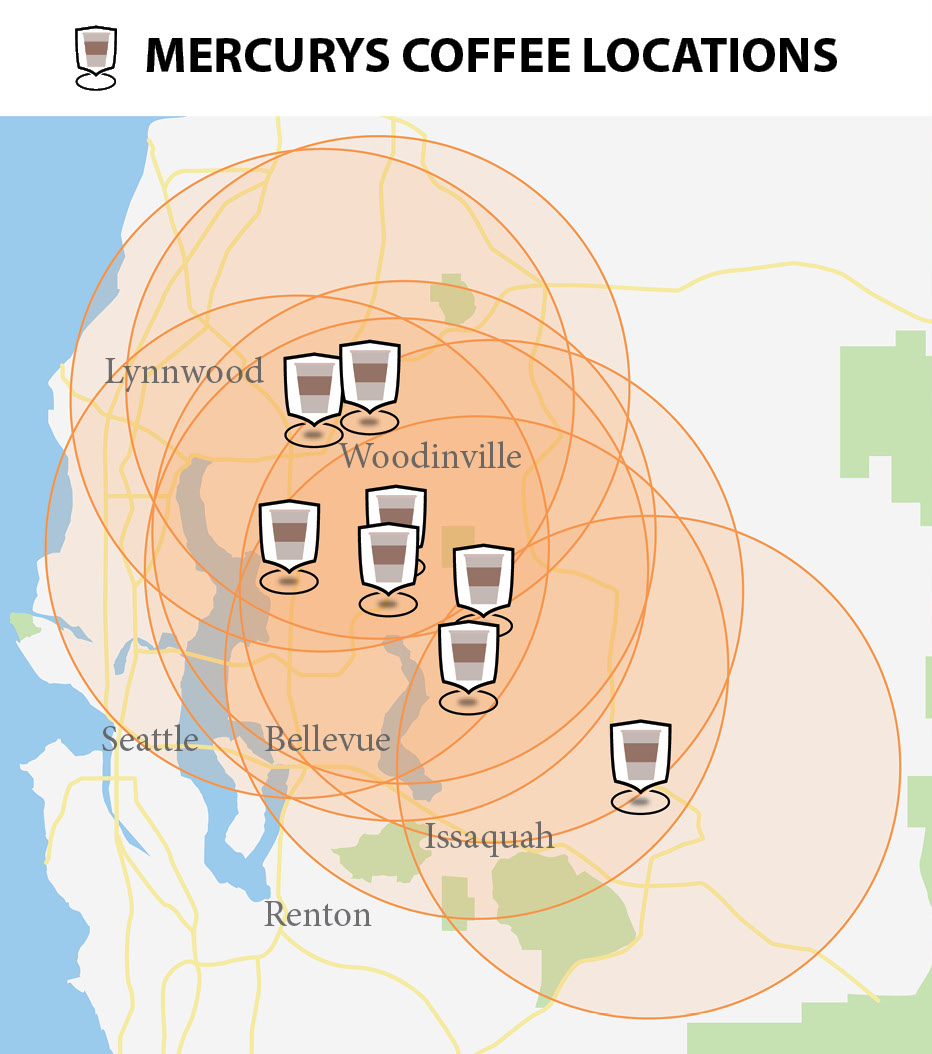 According to a copy of the Mercurys Coffee non-compete agreement in court records, employees were restricted from working at another coffee shop within 10 miles of any Mercurys Coffee location. Image by the King County Office of the Attorney General.

Seattle-area coffee chain Mercurys Coffee has agreed to void hundreds of non-compete agreements that staff members, including hourly baristas, were required to sign for employment.

A recent Washington State Attorney General’s Office investigation found that Mercurys had approximately 120 people currently in its employment throughout eight retail locations, and about 700 over the past five years.

All those employees were required to sign an overreaching non-compete agreement that prohibited them from working at any coffee shop within 10 miles of a Mercurys Coffee location for a period of 18 months after leaving the company. According to the AG’s calculation, the agreement would require employees of Mercurys Redmond location, for example, to drive some 40 minutes before they could find another coffee shop in which to work.

The Attorney General’s initial complaint also uncovered the fact that Mercurys Coffee took legal action against numerous employees to enforce these agreements, including a store manager making $17 per hour who left Mercurys for another coffee shop 1.5 miles away. The company also threatened to sue another former employee who left to work at a Starbucks, the complaint states.

“Non-compete agreements targeting low-wage, hourly employees give companies an unfair advantage at the expense of workers,” Washington State Attorney General Bob Ferguson said in an announcement of the case settlement. “Any company that makes their employees sign unfair contracts should expect to hear from my office. A coffee shop barista, or any low-wage worker for that matter, should not fear retaliation just for moving to another job that’s better for them.”

As part of the settlement, Mercurys has agreed to void existing non-compete agreements, while also reimbursing the state $50,000 for the investigation. The company has not accepted any liability or conceded any violation of the law, according to the settlement terms.

[Editor’s note. This story has been updated. The original version incorrectly stated that the investigation was led by King Country representatives, when it was in fact led by the Washington State Attorney General’s office.]

Bob Ferguson is the AtG for the State of Washington. UNless there is another one, I wonder how HE would be bringing this action in King County. He could very well BE the guy following this out, as that is his style,. He may only be advising King County on how HIS office would view that, and pressuring Mercury to back off.

Non compete agreements are typically found in more specialised fields, where specific knowledge of the former company could be used to give the new employer an advantage he’d otherwise not have. Such agreements have no place in hourly employment. If I worked at a Home Depot would it be fair for them to insist I not work for Lowes, or an Ace, True Value, DoIt? Of course not.

This is a good outcome. Glad Mercury got their wings clipped on this one. It could serve as a precedent and warning for other similar businesses to heed.

I do NOT like the terms of the settlement, though. $50 K to repay government for their investigation is perhaps OK (isn’t that why we pay TAXES?) but what of the baristi who were prevented from working closer to home, or left the industry altogether because they could not work near where they live? One would think they have been specifically harmed, and thus due some compensation for their harm. Seven hundred is a signficant number of people to be affected by sich a policy.

I totally agree. A 50,000 dollar fine that doesn’t help the actual victims is laughable.

They have the following mission statement on their website: “To Embrace People, Foster Relationships, and Spread Love – One Greeting, One Connection, and One Relationship at a Time.”

Somehow, I don’t think they apply this to their baristas who are only making a few bucks over minimum wage!

While the settlement sucks, this does open it up for former employees to sue Mercury Coffee for the practice and lost income.

Interesting. Starbucks used to have non-compete agreements many years ago. They had to stop enforcing them as when Washington State Supreme court ruled that non-compete clauses are unenforceable unless there is an upfront payment made to the employee at the time of hire. I couldn’t find the specific case, but I know one of the individuals involved, tangentially. And it looks like the state just changed the law again this year – https://www.natlawreview.com/article/non-competes-washington-over-reaching-could-cost-employers