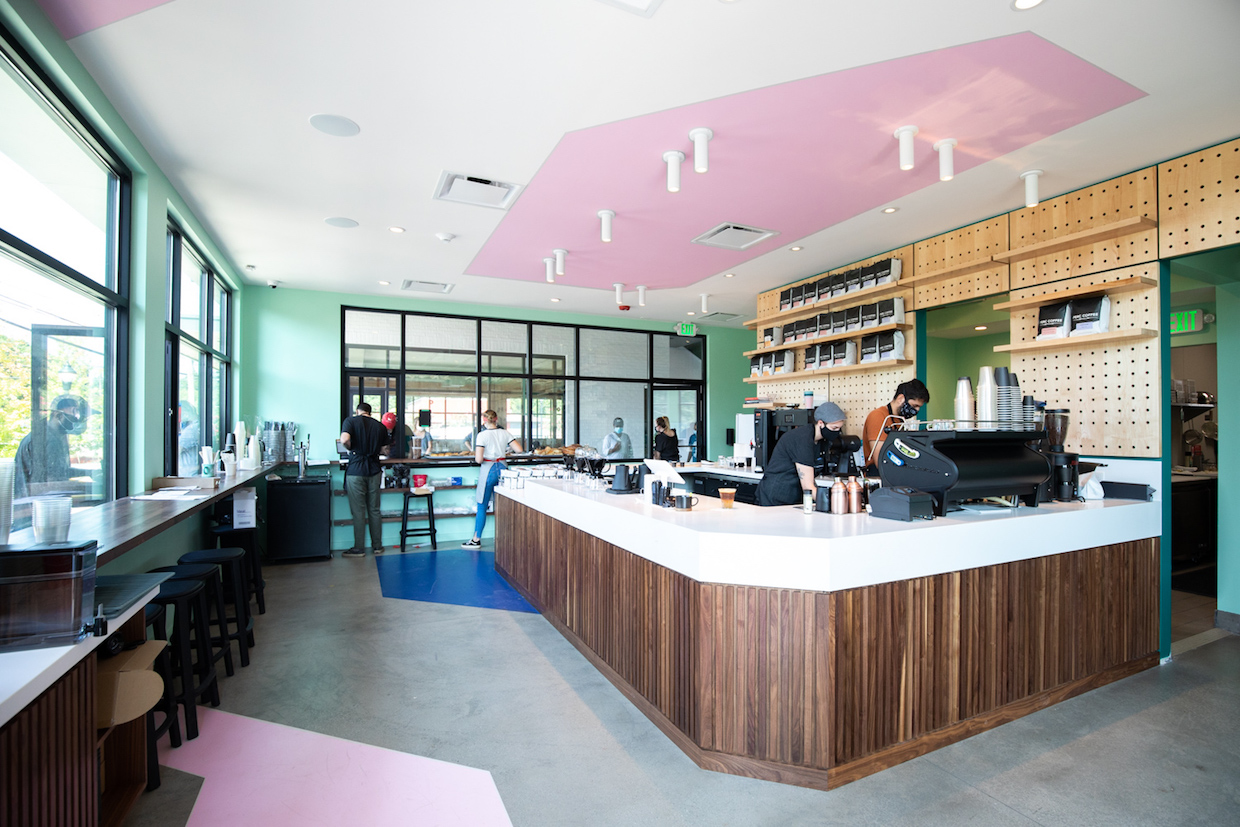 Savannah, Georgia-based Perc Coffee Roasters has expanded beyond its home city with the opening of its second cafe, in Atlanta.

In the East Lake neighborhood, the company is practicing a modern twist on an old expression: When one door closes due to COVID-19, a window opens.

Though the doors to the new shop remain closed to the public for now, visitors can still avail themselves of high-quality coffee drinks and fresh foods through a walk-up window, and then have a seat on the new shop’s outdoor accommodations. 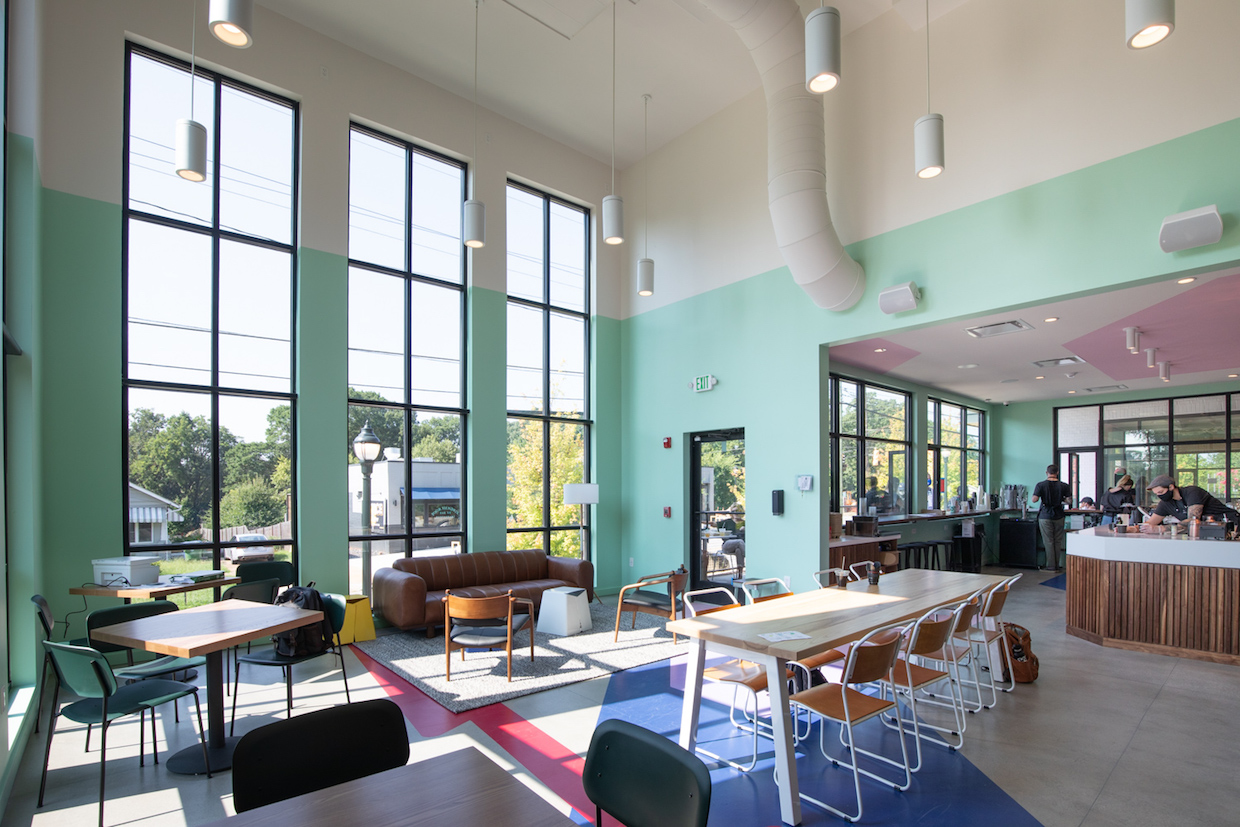 “We have a large patio area with outside seating set up with plenty of distance between tables,” Perc Coffee Owner Philip Brown told Daily Coffee News. “We have a mask-only policy with a sanitation station and are diligent about practicing social distancing.”

Inside, a colorful interior awaits customers for when safety permits. The mint green walls of the 1,760-square-foot space are brightened by two-story-tall windows that also channel sunshine down onto floors with pink, red and blue designs. On the gleaming white top of the warm wood-fronted bar is a stretch of matte black equipment reflecting the seriousness with which Perc approaches its craft. 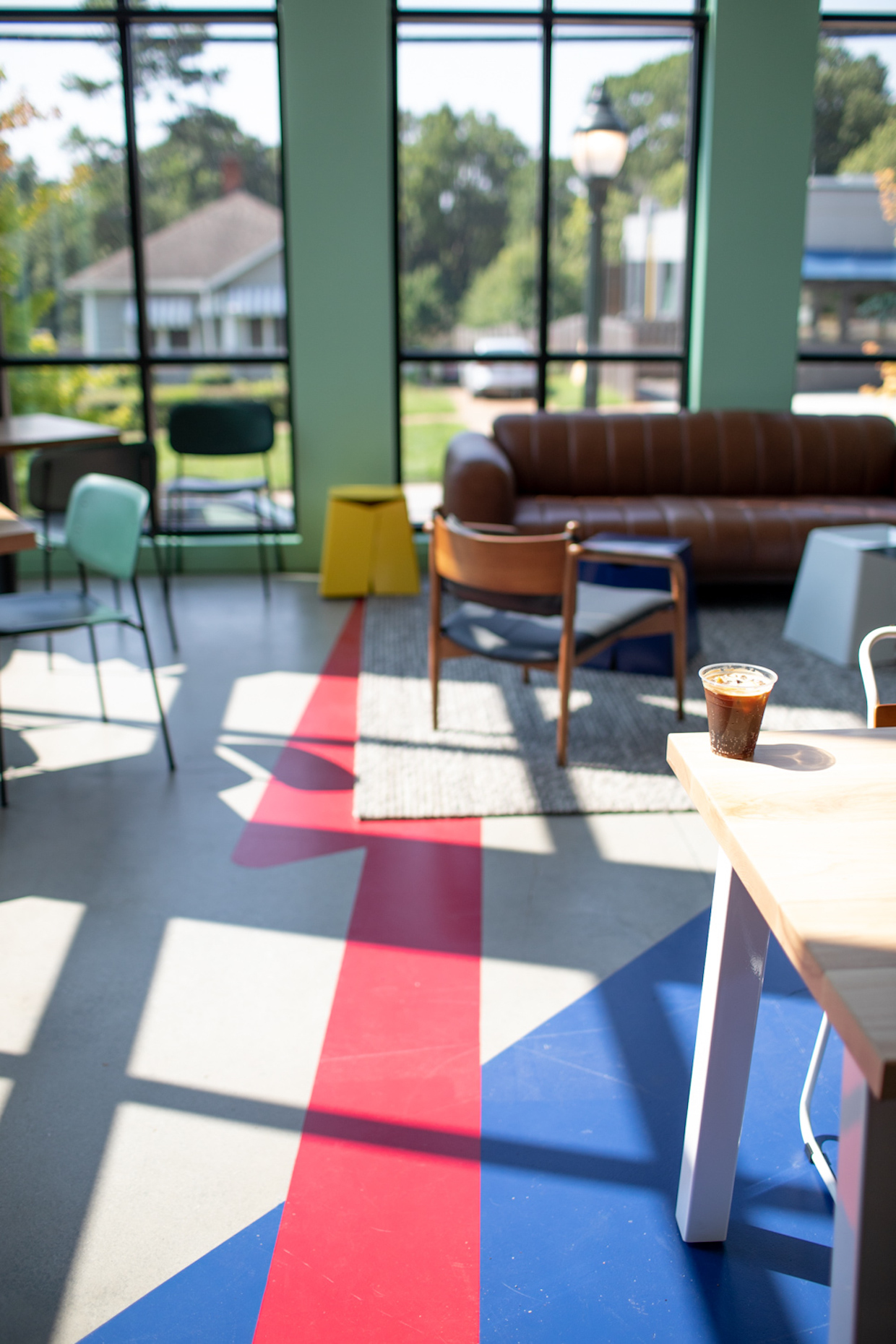 “We deviated a bit from our more tried-and-true equipment list and opted for gear we thought would both let us push our coffees to new levels and would look awesome on bar,” said Brown. “We’re also in a beautiful new building, which is a serious departure from what we’re used to in Savannah, so it was a bit of a struggle to be ok with doing things that are really nice rather than more industrial. We’ve never been shy about using lots of color, and that definitely shows in the space.”

As for the impact COVID-19 has had on the business, Brown said it has been substantial, but that the company was reasonably well-positioned to find its way through.

“Covid has hit us like everyone else,” said Brown. “We were lucky to have had a big uptick in both grocery and web store sales. Our cafe at the roastery is still closed to walk-ins, but we have pick-up and local hands-free delivery options for those looking to grab a bag.” 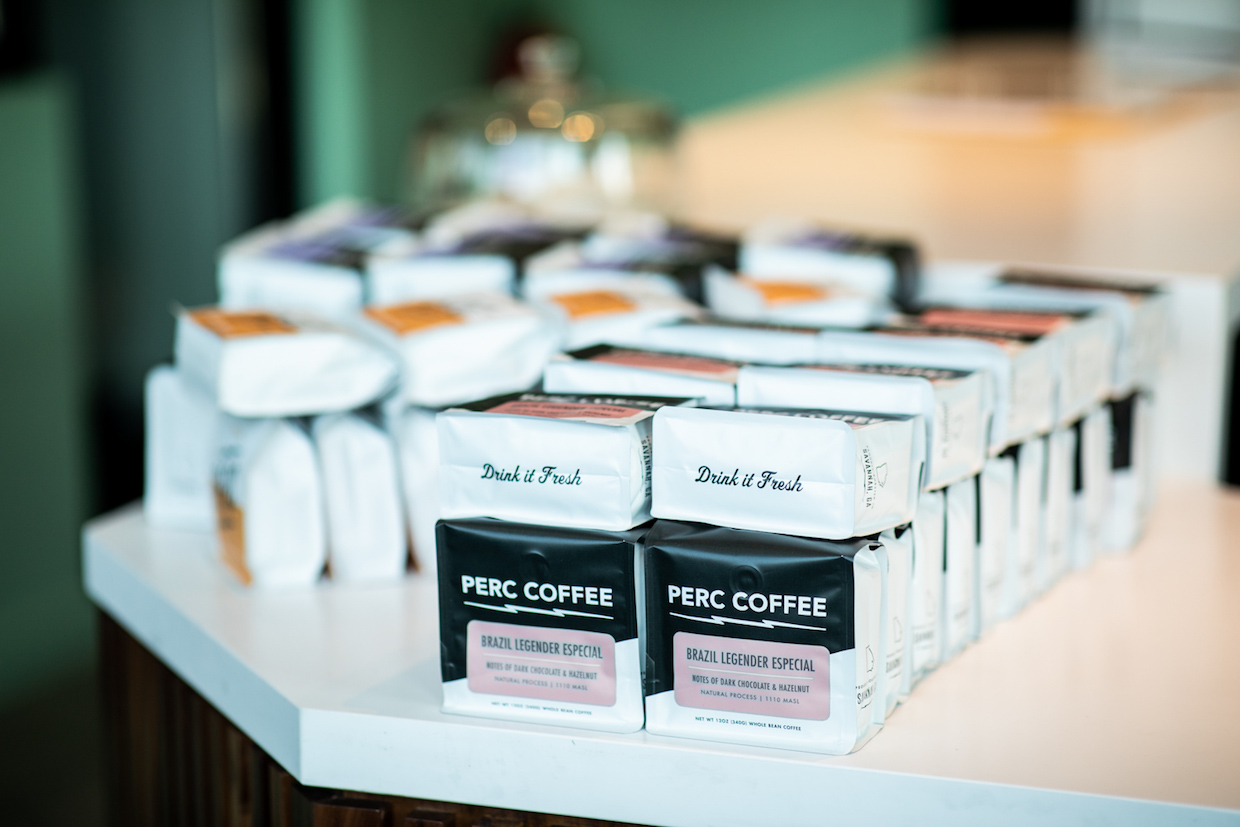 For its opening period, the new shop has Mahlkönig Peak espresso grinders borrowed from Perc’s Savannah headquarters, though Brown said these will be swapped out for brand new Mahlkönig E65S GBW espresso grinders. With those, the entire espresso workflow will be weight-based, Brown said, including through the shop’s 2-group La Marzocco Strada AV ABR espresso machine.

“The craft beer industry has done such a great job of engaging customers and creating memorable experiences at breweries; we’re looking to do the same,” said Brown. “Our coffee menu allows customers to choose their own adventure. They’ll select between two single-origin coffees: one mild and one wild. For August, those will be the Brazil Legender and Ethiopia Sasaba. Each coffee will be offered as espresso, drip, and cold preparations. For folks looking for something more adventurous, we’ll have a limited release option on pourover starting with the natural Guatemala San Sebastian. Where it gets really fun is offering all three together as a flight.”

Perc has also been working with Atlanta-based baker Sarah Dodge for almost a year to put together a food program as carefully planned and meticulously executed as its coffee program. Pastries and breads are baked in-house, as are breakfast, brunch and lunch options including bowls, sandwiches and salads. The location plans to offer beer and wine in the future.

Coffee for all operations continues to be roasted in Savannah, primarily on the company’s Diedrich CR-25 roaster, though the full production line also includes Diedrich IR12 and IR1 roasters, as well as an Ikawa roaster for samples.

Brown said Perc has also just placed its order for a Loring S35, with plans to expand into the space next door to its current location. 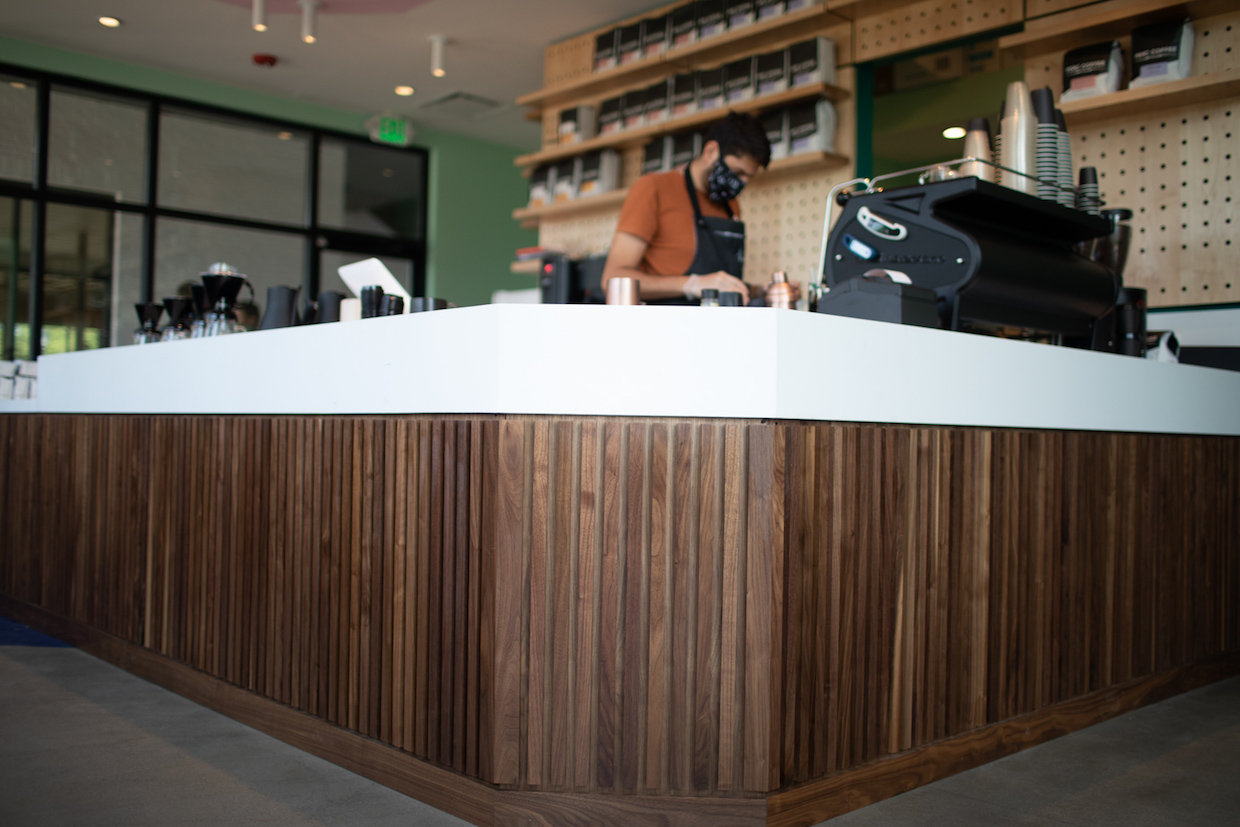 “We’re super excited to have to have the increased capacity of running the 25 and 35 kilos concurrently,” said Brown. “We can’t wait to dig in and nerd out with a brand that’s new to us.”