The Price of Zoonotic Transfer: Rethinking Kopi Luwak in the Age of COVID-19 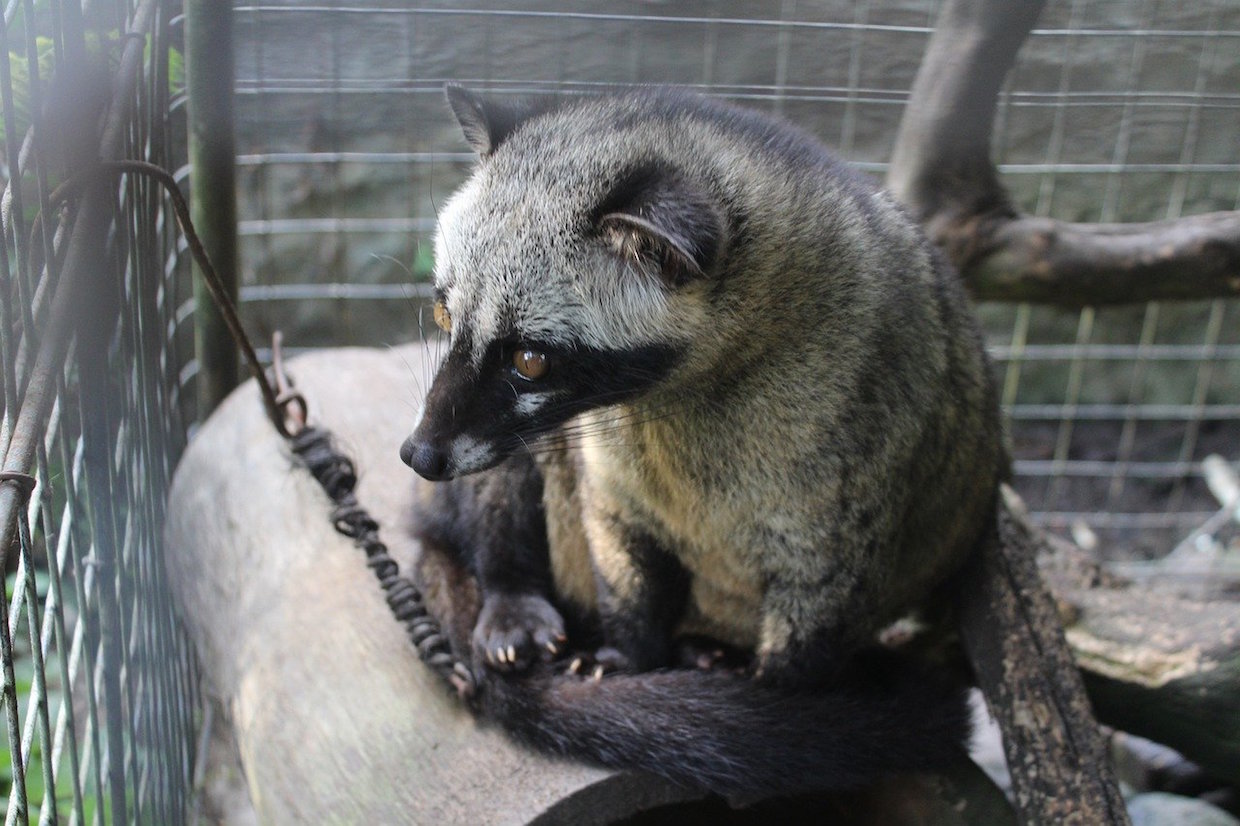 A caged civet in Indonesia.

Among the most heinous seed-to-cup narratives ever perpetuated by the coffee industry is the story of kopi luwak.

It was one that was famously repeated in the 2007 old man buddy comedy The Bucket List, in which Jack Nicholson’s character is reading a coffee product description to a character played by Morgan Freeman, who is near death but could use a good laugh. Nicholson recites:

Kopi Luwak is the world’s most expensive coffee, though for some it falls under the category of too good to be true. In the Sumatran village where the beans are grown lives a breed of wild tree cat…

Since that moment, the business of kopi luwak — coffee that is purported to pass through the digestive tract of Indonesian palm civets —  has ballooned. There are now hundreds of sellers of kopi luwak through various legitimate and nefarious channels alike online, and there’s an entire cottage industry in parts of Indonesia primarily catering to tourists seeking the luxurious thrill of crapped coffee.

This all comes despite the fact that there’s been well-documented evidence of animal cruelty involving caged civets that are force-fed coffee cherries and left in squalor amidst disease and other nearby animals — all to sell more of the world’s “most expensive coffee” to the unimaginative wealthy. 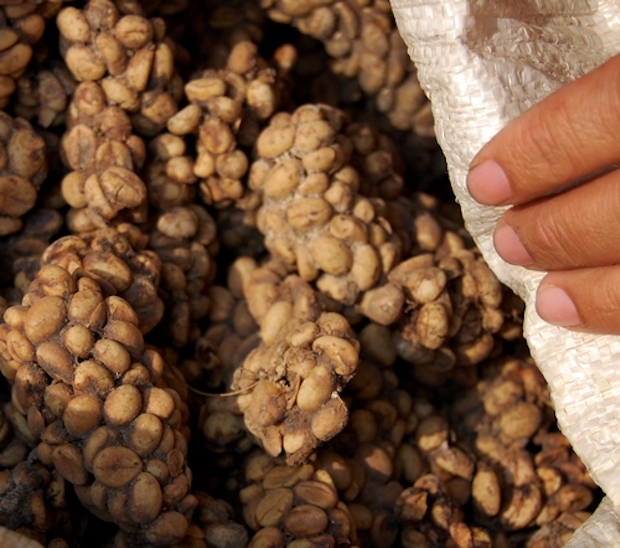 There’s also been little oversight of the kopi luwak segment of the coffee industry, as the segment has been shut out of certification schemes, and the verification of cage-free or legitimate kopi luwak claims is a near-impossible proposition.

Despite these realities, kopi luwak production has managed to carry on for the better part of a decade.

In these days of the novel coronavirus, there may be an even more important reason for the coffee industry to reconsider its stance on kopi luwak: zoonotic transfer, i.e. the transmission of a disease from a non-human animal host to a human.

The nonprofit animal rights group PETA this week released an undercover video report that showed alleged conditions of caged civets on the island of Bali, Indonesia, in which PETA operatives pretended to be tourists. It resembled similar reports throughout the 2010s on unethical kopi luwak production, though PETA this time offered a different pitch: the next pandemic could come from the coffee industry. 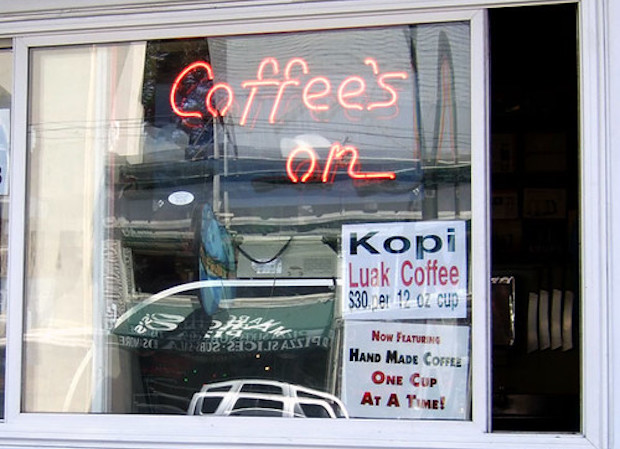 A cafe advertising kopi luwak coffee for $30 per 12-ounce cup. “Coffee’s on” by Jutta @ flickr is licensed under CC BY-SA 2.0

Their argument is that as civets are caged, traded and shipped through underground markets alongside humans and all kinds of other animals, kopi luwak production can result in a kind of breeding ground for new animal-borne diseases.

Though PETA provides no hard evidence to support this theory, it is widely understood in the scientific community that the SARS virus — the 2004 predecessor to COVID-19 — was transmitted from a population of bats to civets before being transmitted to humans. Though the evidence is not yet conclusive, it is the scaly, docile mammal pangolin that is currently leading the candidate list of non-human animal hosts believed to have transmitted the novel coronavirus to humans.

In some places, pangolin meat has been considered a delicacy — something to be savored only by those with the finest tastes and deepest pockets — rather than a vehicle for zoonotic transfer. Sound familiar?

In the coffee industry, it would be unfair to single out kopi luwak as the sole potential means towards the world’s next great virus. The industry has played its part in widespread deforestation and land use activities that have destroyed ecosystems and put humans in close contact with untold numbers of new non-human animal diseases.

But perhaps it’s time for thrill-seeking coffee drinkers to preemptively nix some items from their bucket lists.

I always liked the strapline somebody once suggested for Kopi Luwak:

Interesting point but I stopped reading at PETA. This is a sham organization that doesn’t give a damn about animals. The fact that anyone would cite them or their “work” makes me seriously question what comes after that citation.

quote: “understood in the scientific community that the SARS virus — the 2004 predecessor to COVID-19 — was transmitted from a population of bats to civets before being transmitted to humans. Though the evidence is not yet conclusive, it is the scaly, docile mammal pangolin that is currently leading the candidate list of non-human animal hosts believed to have transmitted the novel coronavirus to humans.”

FIrst, I am solidy aligned with Andy, above, about PETA. One of the most UNethical oautfits ever gathered together. I tke every word they emit with a containler load of salt.

As regards the conceot of “zoonitoc transfer”, this articles treatment of it is VERY faulty.

First, the virus now holding the world in a government-mandated panic did NOT “jump” from bats to humans. Just tnis morning I read an in depth article by someone who has spent the last couple of decades involved in SARS virus work, and specificlcalll ralated to engineering that familhy of virus to make them able to affect humans when in their natiural form could not. VERY detaioled and specific facts inclujding analisis of the genome sequence, proteins on the “spikes”, their ability t attach to receptor cells in bats, pangolins, and humans…. or not. Their research established beyoind an reasonable doubt that no corona virus ever has been found in bats or pangolins that could effecgivel reproduce in humans, and none ever found in humans has ever been able to reproduce in bats or pangolins. The statistical possibility that any corona virus “jumped” from bats or pangolins to humans without deliberate reengineering in a laboratory is a negative to several powers of ten. And this writer named and idnetified the proteins originally on the virus in bats, and detailed exactly which aspects of it had to have beem “cut and pasted” from a different virus (and names THAT one, too) in order to render the new manufactured virus able to gain access to human cells to enable it to reproduce.

So the very concept has been proven bogus.

NOW< let us assume it IS possible (in spite of the above informatioin) consider the life span of any corona virus OUTSIDE of a warm blooded host animal. That survivabilty window is measured in mintues. Certainl well short of an hour. In other words, if the cornoa virus is NOT able to enter an approporiate receptor cell in a warm blooded animal within that time period, let is say one hour (many times the possible survabiity of the virus ) it will never be able to reproduce. Without reproducing that virus is gone, kaput,donefor, non-existant.

HOW LONG do those cat turds with the [rocessed coffee seeds lie about in those cages, or even on the ground in the wile, before they are gathered? Several hours, at minimum is muy guess. Not like picking ripe cherreis, with a critical time frame before processing, right? EVEN IF those cat turds are gathered whilst still warm and gooey, how much longer will it be before the seeds are separated from each other and their carrier goop, and washed, then set somewhere to dry? Several DAYS< right? We all know this process. There is NO WAY any virus can endure thisprocess and remain anything more than a few disjointed molocules.

So no, even IF COVID 19 COULD infect the cats, AND humans, the time lag between being depositied in or on the coffee seeds passing through the warm insides of the kitty and the time the beans are processed and dried would render those virus particles naught but dust.
Next, we have the weeks and months the theoiretical impossibly capable virus that COULD still infect the coffee seeds will now be bagged, GrainPro or plane jute, rested, shipped, ware\housed, purchased, in inveitnry, then ROASTED…… at temperaturs approaching 400F.
The theory being advanced by PETA that Coronavirus of any type could possilby be transmitted from these cats in Bali into someone's cup here in the US is either a fairy tale akin to something from Lewis Carroll, to perhaps some drug induced halucination. Let us have done with such nonsense, and carry on. There is NO DANGER whatever of COVID or any other viral disease coming our way through this etiology. m Leave the fairy tales andfearmongering to the government poohbahs. Tjey seem quite good at it.

I would love to know the details of this person who knows for a fact it was lab engineered and what other virus was used.
This info needs to be on the papers, the tvs, social media, everywhere, if true.

The bases was a bat corona virus, or possibly a different natural strain, and the GOF was performed in the lab there in Wuhan province CHina, and ilgally funded by the illustrious Doc Phautchee.
Yu will not find anything about this in manistream media, or most places with any traffic on the net. Why? Because thos tale is
the thing that must not be mentioned”. often categorised as “misinformation” and instantly pulled from all effective social media, news feeds, etc.
Ive found plenty of details, involved princials, etc. Not hard.. but the news you find on the teevee set will not mention it.

I hav had the equivalent coffee from El Salavdor, ingested andn”processed” by a local relative of that palm civit over in Bali. They gather the droppings up off the ground when there are enough to bother with, then wash/process them.SMooth sorta sweet, very bland.. meh!! It was fun…

Now as to the possibibily of zoonotic transfer. if this were posible between these cats and humans anywhere, we’d have gone ona rampage to eliminate house cats the world over. Fact is, the twy species are not capable of hosting the same virus strains that bring the WUhan Flu to humans. To my knowledge, neither are dogs compatible as vectors for the spread of the WuFlu. On the other han, bat corona viruses CAN jump the species barrier. Theyr anatomy is such that playing vector can happen. That is why the folks at WUnah Lever Four lab started with at corona virus types.
The level of fear and hysteria over this seasonal flu has been astounding. Never before in human hisotry uas such a scam been perpetrated. Eat well, take yer vidieyums, stay physically active preferably OUTSIDE in sunshine and fresh clean air…