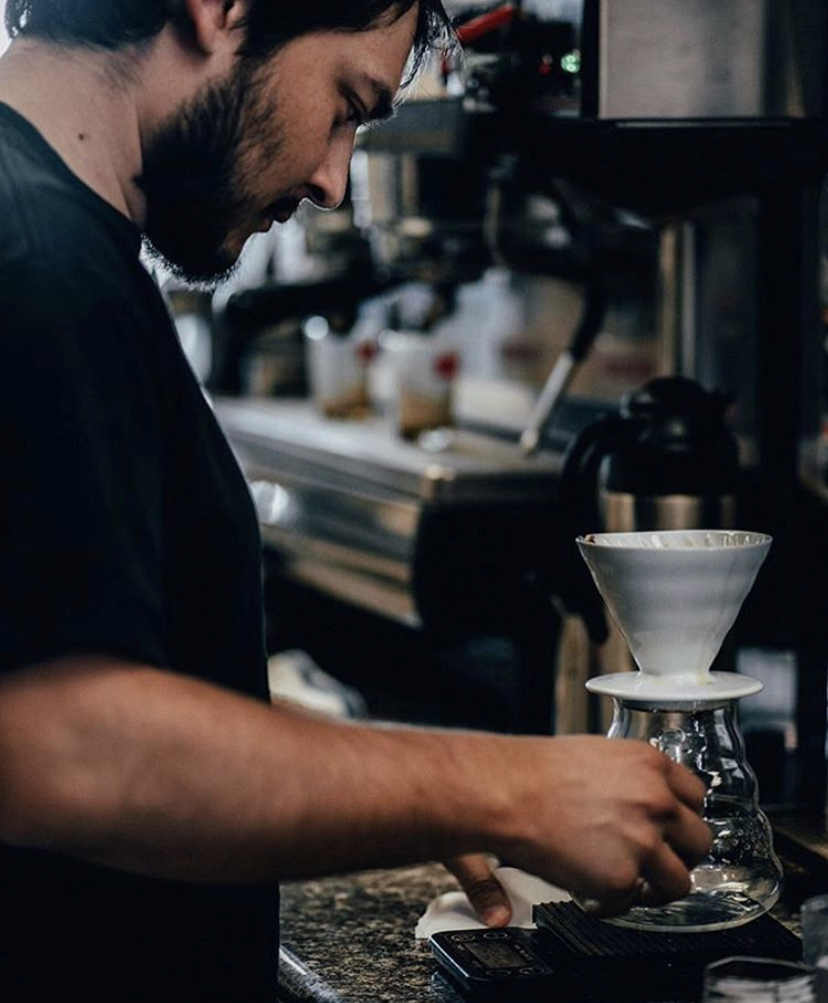 Daniel Olivares can recall being a young man living in Los Angeles when he visited a newly opened location of a high-end San Francisco-based specialty coffee chain in his neighborhood of Echo Park.

He remembers seeing that two of the three coffees on offer at the sleek bar were from Latin America, yet everyone there making and buying the coffee was white.

It has long been the case that specialty coffee shops have been markers of gentrification in certain communities, and that disparities carry through to the coffees themselves. Most often hailing from parts of Latin America, Africa or Asia, specialty beans are predominantly bought and sold in the United States by white people.

With its colonialist roots, coffee has a long, nefarious history regarding racial relations and equity. The product first arrived in the Americas with European colonizers, and it has for generations relied upon the slave labor, slavery-like labor or underpaid hard labor of primarily black and brown people to satisfy the demand of predominantly white consumers. 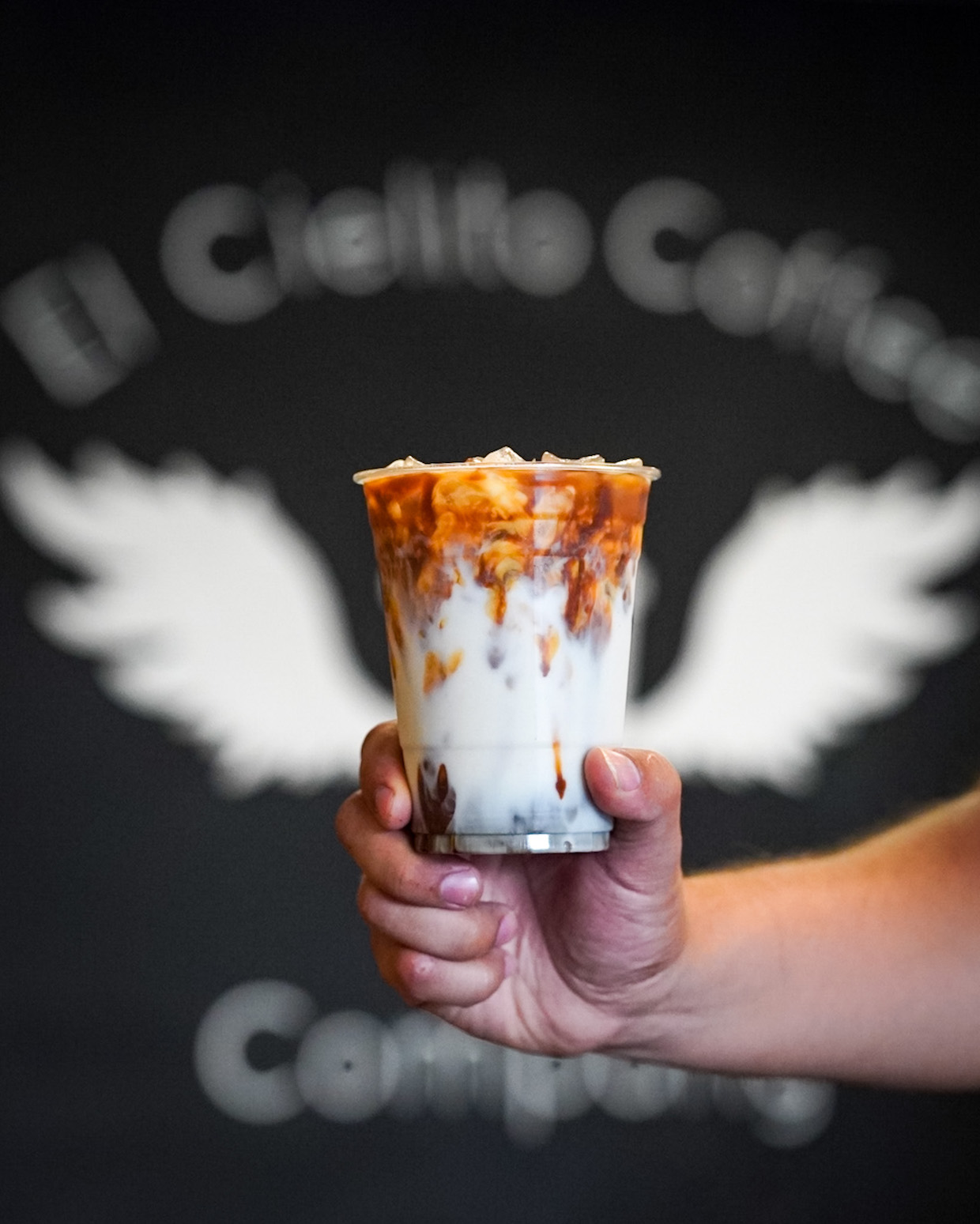 On a more granular level, the lack of diversity in coffee consumption that Daniel Olivares saw that day in Echo Park inspired him to open El Cielito Café. Located in South Gate, the shop has been operating for five years, serving coffee directly from Latin American coffee growers since 2018.

Olivares told Daily Coffee News he has faced struggles being a young Latino coffee shop owner. Within the coffee community, he has been profiled by white shop owners who have assumed to know his ethnicity or who assume that he and his family came from a coffee farm, based on his last name or the way he speaks.

“I was 21 when I first started Cielito, so then it was like a double whammy,” said Olivares. “So they saw me as Latino, so undereducated, and then they saw me as a young dude so they’re like, ‘Okay, this guy doesn’t know really anything.’”

Olivares said that often when meeting with other shop owners, he will present coffee from Nicaraguan or Guatemalan farms and will receive what he described as passive-aggressive questions about these countries and cultures. 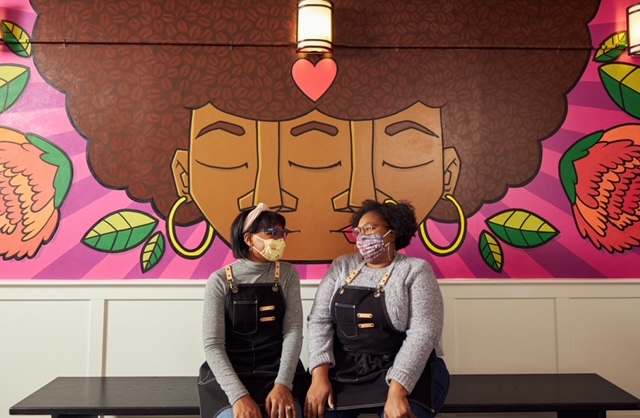 Jeronica Macey, co-owner of San Jose’s Nirvana Soul, started in the industry as a barista at Peet’s Coffee. She said that the staff at the time was diverse, but when she left to work in other shops, she was often the only Black employee. This created an environment that did not encourage advancement, she said.

“I have been in the industry for 17 years,” said Macey. “A lot of times, I definitely was the only Black person in a shop. It was hard to move up, get training, and learn how to roast.” 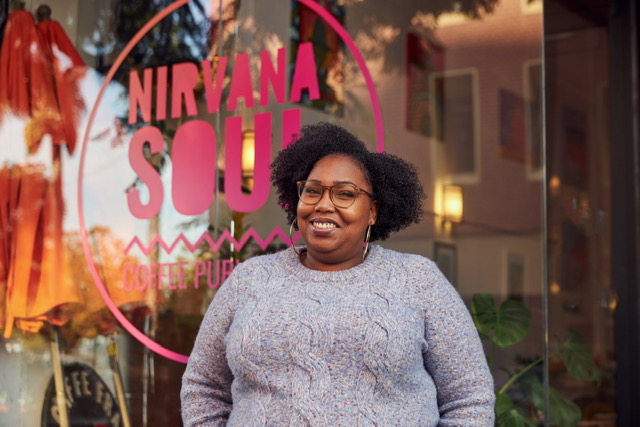 Bianka Alloyn Brunson, co-founder of the Oakland roasting company Cute Coffee, echoed the experience of feeling as though expectations were different for people of color working in coffee shops.

“Once upon a time I never saw anybody, any shade of brown, that was working behind a counter, and I would be that one person working behind the counter and knowing all this stuff,” Alloyn Brunson said. “I noticed a lot of people don’t want you to know more than them. They feel like, ‘Hey I showed you a couple things and that’s all you need to know’ and, ‘How dare you know more than me? You’re not supposed to.’”

The other co-founder of Cute Coffee, Sabreen Naimah Wilkes, said that this racial divide is also perceptible as a Black consumer of coffee.

“Definitely as a customer… there’s certain shops in the past that I didn’t want to go to because I’m like ‘Uh, this is a little too white,'” Naimah Wilkes said. “It just doesn’t feel like they really want me there.”

Removing such racial divisions and inequity at numerous points has become a priority for coffee shop operators like El Cielito’s Olivares, who intentionally sources coffees from Latin American countries such as El Salvador, Guatemala and Nicaragua to find common ground among a broader base of customers. He said members of the Latinx community will enter and get excited to see their countries represented on the menu. 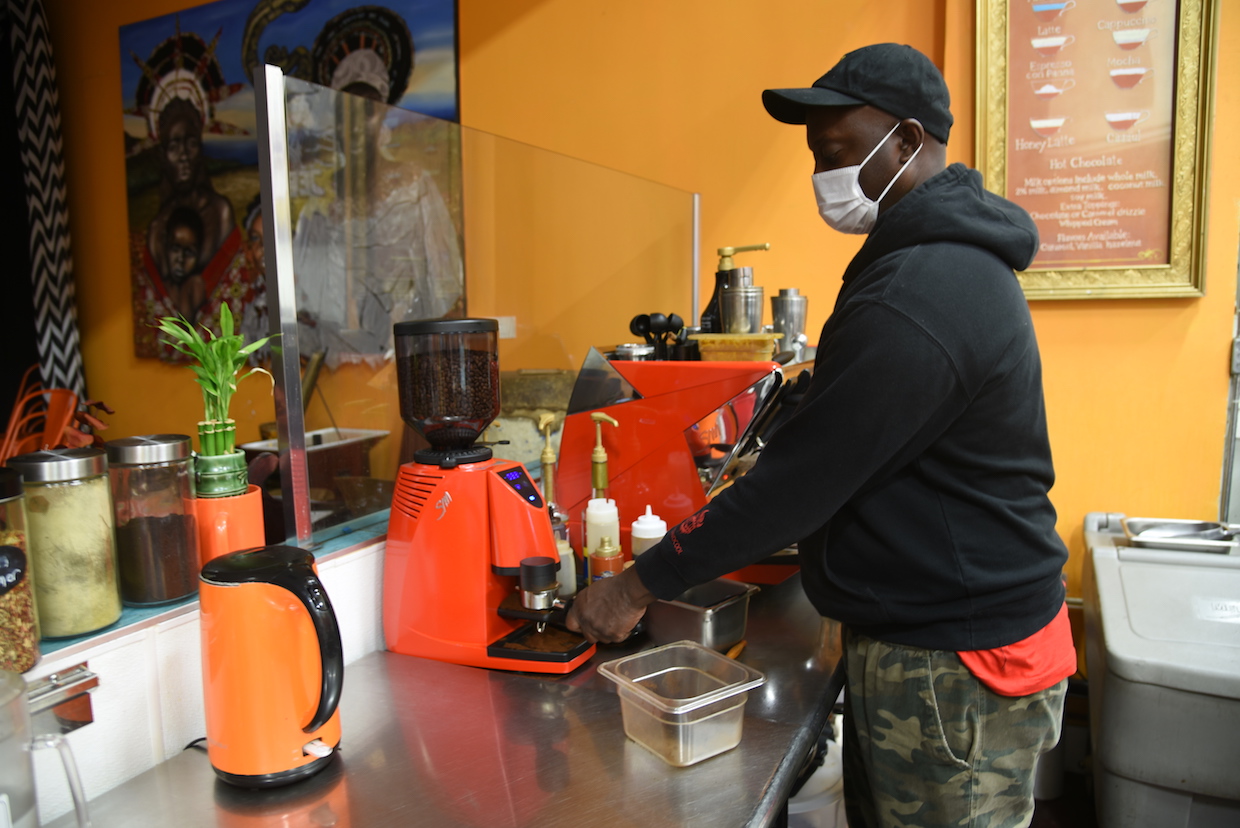 Tony Jolly, the founder and owner of Hot and Cool Café in the Leimert Park neighborhood of Los Angeles, wants his shop to be an open space where Black guests can simply learn more about specialty coffee without the kind of pretension that can be felt in some white-owned shops.

“I think one thing Hot & Cool can offer is that it’s a place where people of minority, black and brown, can come in and lay their hands down and ask questions and they don’t have to look like they know everything,” Jolly told DCN. “In those white places, it’s hard for the black and brown consumers to go in and be treated as a novice to feel welcome.”

Jolly first started in the coffee industry as a Starbucks barista and later went on to work with coffee farmers independently, selling to specialty roasters. He said that during this period, he experienced what he saw as “blatant racism.”

“When I entered into the specialty coffee space alone, on my own as an African American… it was a really, really tough space to be in,” said Jolly, who described the industry as a “white-dominated fraternity.” 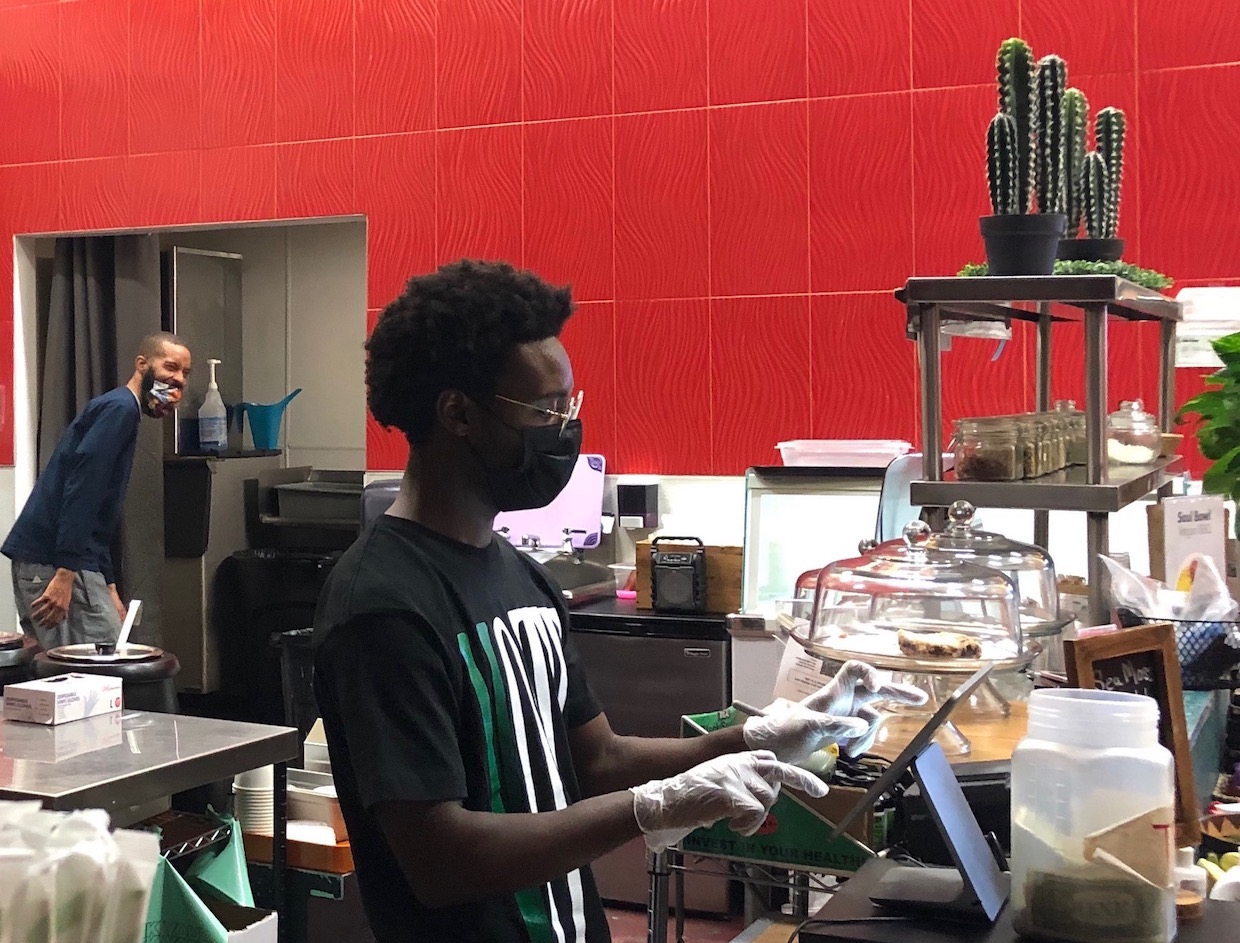 A barista at Hot & Cool Café in L.A. Photo by Cassandra Yany.

Despite these struggles, Jolly was determined to make the best cup of coffee he could using the industry connections he had made, and he eventually chose to set up shop in a primarily Black neighborhood — a decision that he described as the best thing to ever happen to him.

While representation tends to vary greatly based on location, Nirvana Soul’s Macey said that she sees hope in the specialty coffee business, as diversity has noticeably improved just over the past five years.

“It’s nice to see us owning shops, us roasting,” Macey said. “I love when I visit a different state — you could pop into a different coffee shop and just learn something new. So for sure, we’re definitely popping up and it’s pretty amazing.”

Cassandra Yany
Cassandra Yany is a recent graduate of Emerson College. She has been a news and lifestyle reporter for local and national outlets like 360 Magazine, Five Cent Sound, The Rehoboth Reporter, and WEBN Boston.

Every time I play basketball in Orlando Florida I feel the same when the people call me “white pancake” I feel so bad and they look at me like if I am an astronaut or something like that! And according to the statistics I’m not even white! I’m Hispanic or Latino even a black guy from South America is not black here is very absurd the matter! I don’t know but here in Orlando Florida I feel more discrimination by black folks than from whites maybe because I’m white 🥺 it’s a shame

The most discriminated people in the world are the ugly , sometimes fat, of all races, they don’t get the good jobs where attractiveness is required, like a news anchor, they don’t receive romantic interest advances, they may desire sexual relations, but left feeling undesirable and rejected thru no fault of their own. We all know this is so true, its been going on for 10’s of thousands of years, time to stop it now! Just ask yourself would you rather be a hot looking black/hispanic person or an ugly, physically unattractive, so called, white privileged person.