Amsterdam-based UTZ Certified and the Douwe Egberts Foundation, a nonprofit wing of the Amsterdam-based D.E. brand, are teaming up for a new program to develop climate change adaptation strategies for producers in Vietnam. 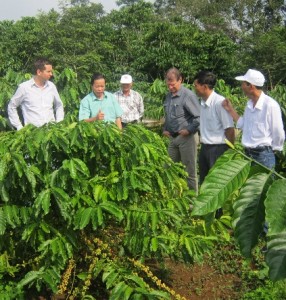 The three-year project, going under the name Coffee Climate Care (C3), will launch with a pilot group of about 500 producers in the Lam Dong province. Additional funding for the program has come from the Deutsche Investitions und Entwicklungsgesellschaft (DEG), with public funds of the German Ministry for Economic Cooperation and Development (BMZ).

The three main goals of the C3 project are to assess vulnerability to production losses do to climate change by measuring greenhouse gas emissions and carbon stocks, to train farmers how to adapt, and to create what UTZ is calling a “Code of Conduct” for reference by coffee producers throughout the world.

“Climate change is a global challenge,” says Britta Wyss Bisang, standards director at UTZ Certified. “Eventually we want to apply the lessons learnt from the C3 project in Vietnamacross our worldwide network of coffee producers.”

Since UTZ began working in Vietnam 11 years ago, more than 7,000 farmers and some 44,000 hectares of coffee-producing land have become UTZ-certified. Representatives of the DE Foundation suggest that during that time, erratic weather due to global climate patterns has been visible in Vietnam.

“During our presence in Vietnam, since 2001, we have seen rainfall patterns become more erratic, with longer and more pronounced drought periods and heavier rainfall in the wet season,” says Don Jansen, program manager at the DE Foundation. “In the Central Highlands, this is creating problems for farmers in drying their coffee. In combination with the expected temperature increase, we may also see drastic effects on coffee production.”