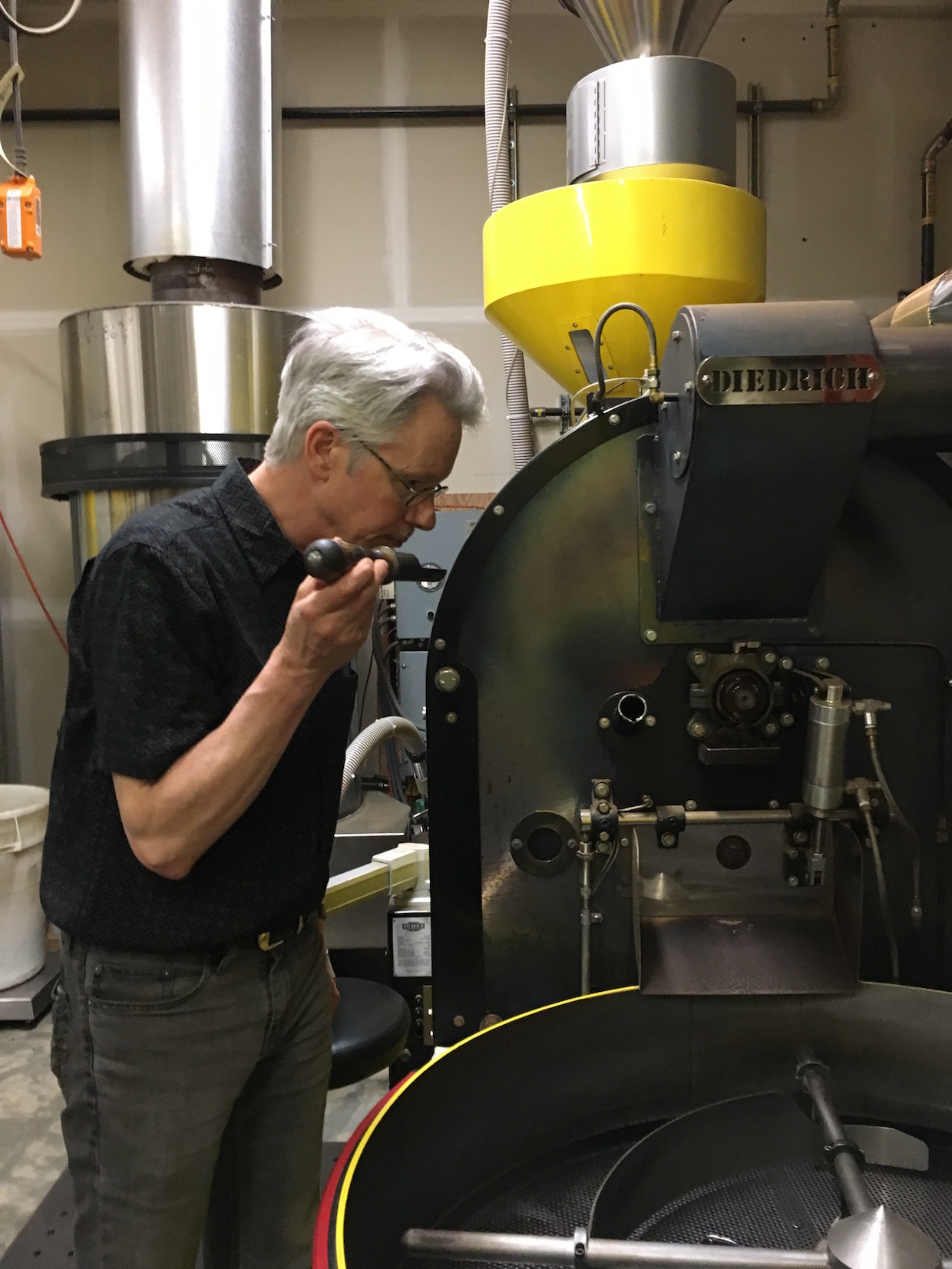 On Ash Wednesday, 2001, the earth outside Seattle began to shake, sending tremors felt throughout the region. In the Emerald City on that same day, another temblor shook the bedrock of the specialty coffee industry, with ramifications that continue to be felt today: The first shot ever pulled on a temperature-stabilized, PID-controlled espresso machine.

The coffee-related tectonic shift was mainly the result of efforts lead by David Schomer, co-founder of the compact, longstanding and influential Seattle coffee company Espresso Vivace, which celebrates its 30th anniversary in business this year.

With two cafes, one walk-up sidewalk stand and a Diedrich CR35 located inside a 5,000-square-foot roastery under a bowling alley, all within walking distance of each other in Seattle, Espresso Vivace has had an outsized impact on the industry thanks to the pioneering influence of Schomer, whose scientific background, energetic dedication and penchant for the arts has for decades combined into an unquenchable quest for perfect, dazzling espresso.

Through his books, instructional videos, and in-person barista training at Espresso Vivace, Schomer has sent countless home and professional baristas deeply down the path towards coffee greatness, one carefully prepared — and, above all, temperature-stable — extraction at a time.

To this day, Schomer, a former Boeing metrologist that has also earned a BFA in Classical Flute Performance from Cornish College of the Arts, looks back on that first PID-controlled extraction as one of the proudest moments in all his years sifting through the art and science of coffee. To accomplish the feat, Schomer rallied a group of great minds to the task, including Versalab grinder designer John Bicht and the La Marzocco braintrust of Roger Whitman, Kent Bakke, John Blackwell and Mark Barnett, the latter of whom went on to found espresso machine manufacturer Synesso.

“All the caramel came out into the cup, and I about died,” Schomer told Daily Coffee News. “It’s a well-documented thing in my past, but as far as seminal moments, that was really one of the best ones.”

Prior to last month it had been decades since the espresso master had actually worked a shift on bar, due at first to his and his partner’s dedication to raising two kids without daycare, and later to Espresso Vivace’s training and roasting programs, and other perpetual managerial concerns. To celebrate the company’s 30th birthday, Schomer spent a couple hours behind the machines in two of the company’s locations, pulling free shots of Monsoon Malabar and Ethiopian Sidamo single-origin espressos for patrons and donating the tips to local at-risk youth support charity YouthCare.

With no intention of expanding retail coffee service beyond the current trio of Espresso Vivace shops, Schomer said that the path for growth ahead will focus on roasting and whole-bean sales, especially online, a la carte and via a subscription service. A weekly highlighted in-store special called Single Origin Sunday will also be roasted and shipped to online customers the same day.

“I’m not a big wholesaler,” said Schomer. “You’d have to be very, very good to wholesale Vivace coffee, so that’s been limited. Retail pouches — that’s my growth. This Northern Italian roast, the people that like it really like it, and they can’t find it anywhere else, so I see a lot of loyalty and word-of-mouth growth.”

In further recognition of Espresso Vivace’s 30th anniversary, Daily Coffee News took some time to chat with its luminary co-proprietor about more recent trends in coffee and the related technology and industry.

DCN: Given your professional background and the many precision points integral to coffee, do you still consider yourself an active metrologist?

David Schomer: Absolutely not. The metrology techniques were useful for isolating the many things that might effect extraction, roasting; it’s a way of thinking, but no, I’m definitely artistically oriented. I just pursue this flavor in this beautiful coffee, which is good for people and so healthy. I’m also just making people happy.

DCN: How do you feel about various technological innovations in grinders and in espresso machines and preparation in the past few years?

DS on grinders: The big problem is getting the powder into the portafilter without altering the integrity of the particle mix within the powder. It’s very difficult. [Christian] Etzinger’s the only one to have done it.

DS on pressure and flow profiling: Pressure profiling is nonsense, in my view. The pressure and flow rate must be absolutely stable, they act like temperature on the coffee. Any change in flow rate, the coffee perceives a different temperature in extraction. It’s all about stability. I could be wrong; coffee is very tricky, and I’ve learned some humility over the years. Sometimes the sacred cow bites the dust. But I haven’t seen any change in pressure or a longer preinfusion being useful at all. It takes you away from the center of the universe, which is that absolutely stable temperature during the extraction brings out the most volatiles into the cup.

DS on roasting: I’m very disappointed with roasting going so sour in the U.S. I think it’s a wrong turn, and that people will turn back towards sweeter coffees with origin flavors rather than just dominated by citric acid, within a few years, I would expect. [In developing my own roast style] I was after caramelized sugar, not a shred of citric acid. Caramelized sugar peaks along with origin flavors in this roast, and I just can’t see ever doing coffee a different way.

DCN: What inspires you most about coffee?

DS: I’m pursuing a flavor; I’m pursuing an experience of making people happy; but to me, one of the most beautiful things I’ve ever seen is that pour just oozing out. That rich color, that viscosity, that glistening cone, and, of course, the fragrance. The challenge of getting the fragrance into the cup to enjoy the flavor and aroma experience is infinite.

DCN: What troubles you most about coffee?

DS: If I think about the future, I worry a little bit about climate change, because the trees take five years to produce and Ethiopia making some of the finest coffees in the world. Willem Boot told me it’s on a plane, and if it gets too warm they can’t go any higher. I haven’t verified that but I have a lot of respect for Willem Boot. He said if it warms up too much, Ethiopia’s out. So I guess I worry a little about arable lands and the ability to produce this wonderful coffee over time.

DCN: What would you be doing if you weren’t for coffee?

DS: Complaining. I don’t know what I’d be doing. I think I’m very lucky to be in coffee. I couldn’t contemplate doing anything else. I’ve really found something that I have a knack for, and that brings people pleasure.

(Note: This interview has been shortened for space and clarity)

“….DS on roasting: I’m very disappointed with roasting going so sour in the U.S. I think it’s a wrong turn, and that people will turn back towards sweeter coffees with origin flavors rather than just dominated by citric acid, within a few years, I would expect. [In developing my own roast style] I was after caramelized sugar, not a shred of citric acid. Caramelized sugar peaks along with origin flavors in this roast, and I just can’t see ever doing coffee a different way….”

Admirers of David Schomer’s work have never soured on it. The specialty coffee industry as it has manifested itself owes a huge debt of gratitude to him. Trendsetter and visionary, DS is unafraid speak his mind and call it as he sees it.

Tell that to Stumptown, Four Barrel and all the other Third Wavers. Most of their coffees match David’s description of sour…I know someone whose grinder was destroyed by underroasted beans from a well-known Portland shop…hilarious. David rocks!

Climate change is man made, meaning if we stop cloud seeding and harp things will revert back to normal.

As to the sour comment: Coffee trees are fruit trees, good coffee tastes like fruit. The same acids present in coffee are the acids that give fruit their flavor (malic, citric etc.). If you don’t like fruity coffee, you don’t like specialty coffee and you should stick with charbucks or canned coffee. It’s okay though, not everyone want’s a specialty product, some prefer hamburger meat over wagyu steak.

Coffee is a seed not a fruit. If you want fruit eat the pulp don’t roast the seeds.

I fell in love with Espresso Vivace 15 years ago and am still madly in love with its thick, luscious, caramel goodness. I love their dolce blend and recently have fallen in love with the Monsoon Malabar. I’ve tried other roasters, but am always disappointed in the shot quality and flavors. Thank you David for your love of coffee and dedication to it.