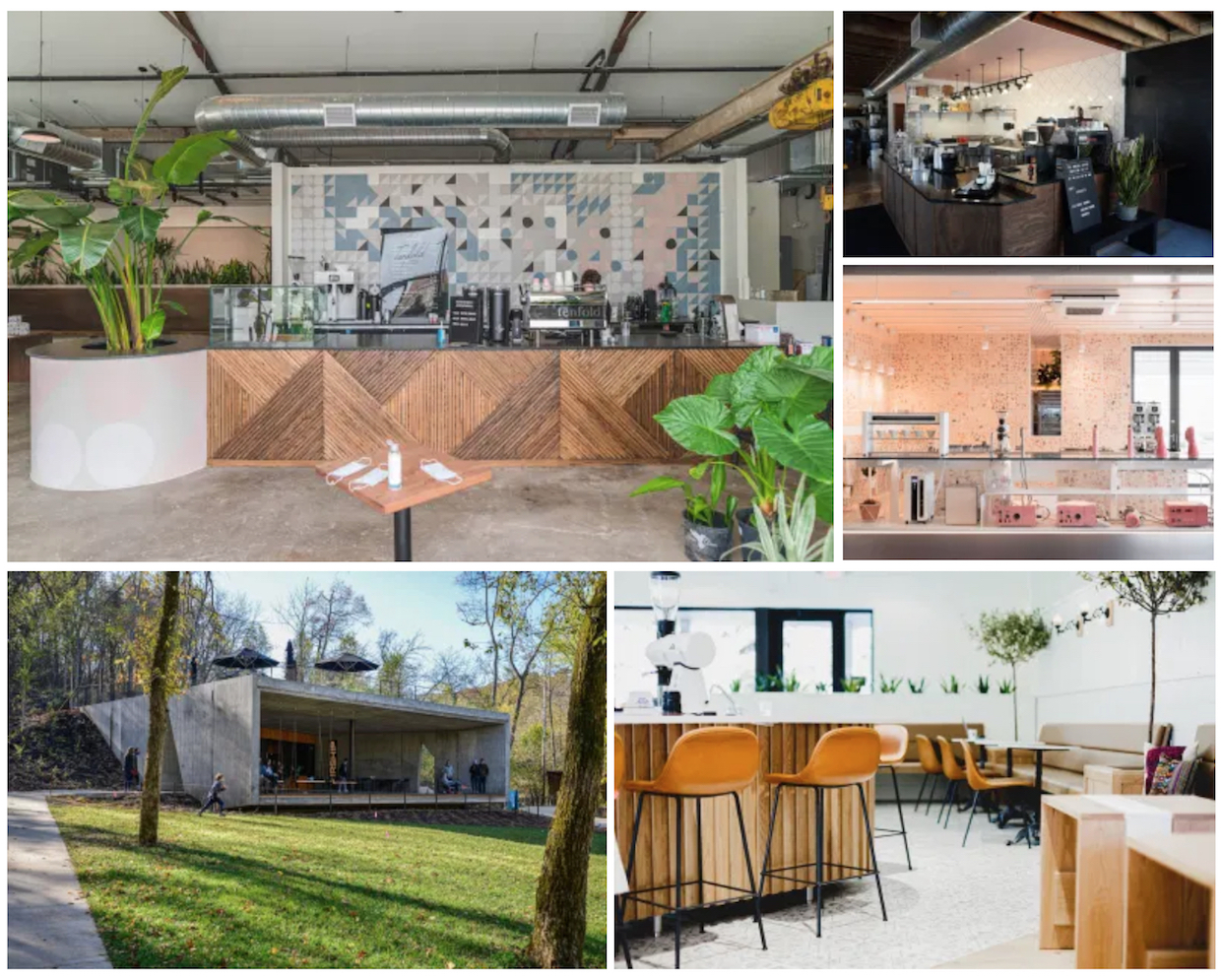 In normal times it’s no surprise that big things happen in Texas, the second most populous state in the union. As we take a look back on some of the momentous masked ribbon-cuttings that occurred against all odds in this year’s pandemic-stricken central United States, it’s heartening to find that the Lone Star state still loomed large.

What’s doubly heartening is how it turned out also to be true for the nation’s 34th most populous state, Arkansas, from which an equal number of headlines are drawn in our year-end roundup of quality-driven new coffee shops.

The city of Bentonville in Northwest Arkansas was particularly fortunate, scoring the fourth retail location of Onyx Coffee Lab this year, featuring an interior design that could be hung in its entirety in a gallery of modern art. It also saw the opening of the new community hub built by Airship Coffee Roasters, accessible only by paved trails in the Coler Mountain Bike Preserve.

From the gulf to the great north woods, here’s a look back at these and other equally exciting new coffee shops that opened their doors in the central U.S. this year:

For former professional NASCAR driver Trevor Bayne, life was once all about speed. Yet with the opening of Mahalo Coffee Roasters last year in Knoxville, Tennessee, Bayne has shifted gears, embracing a more casual pace. 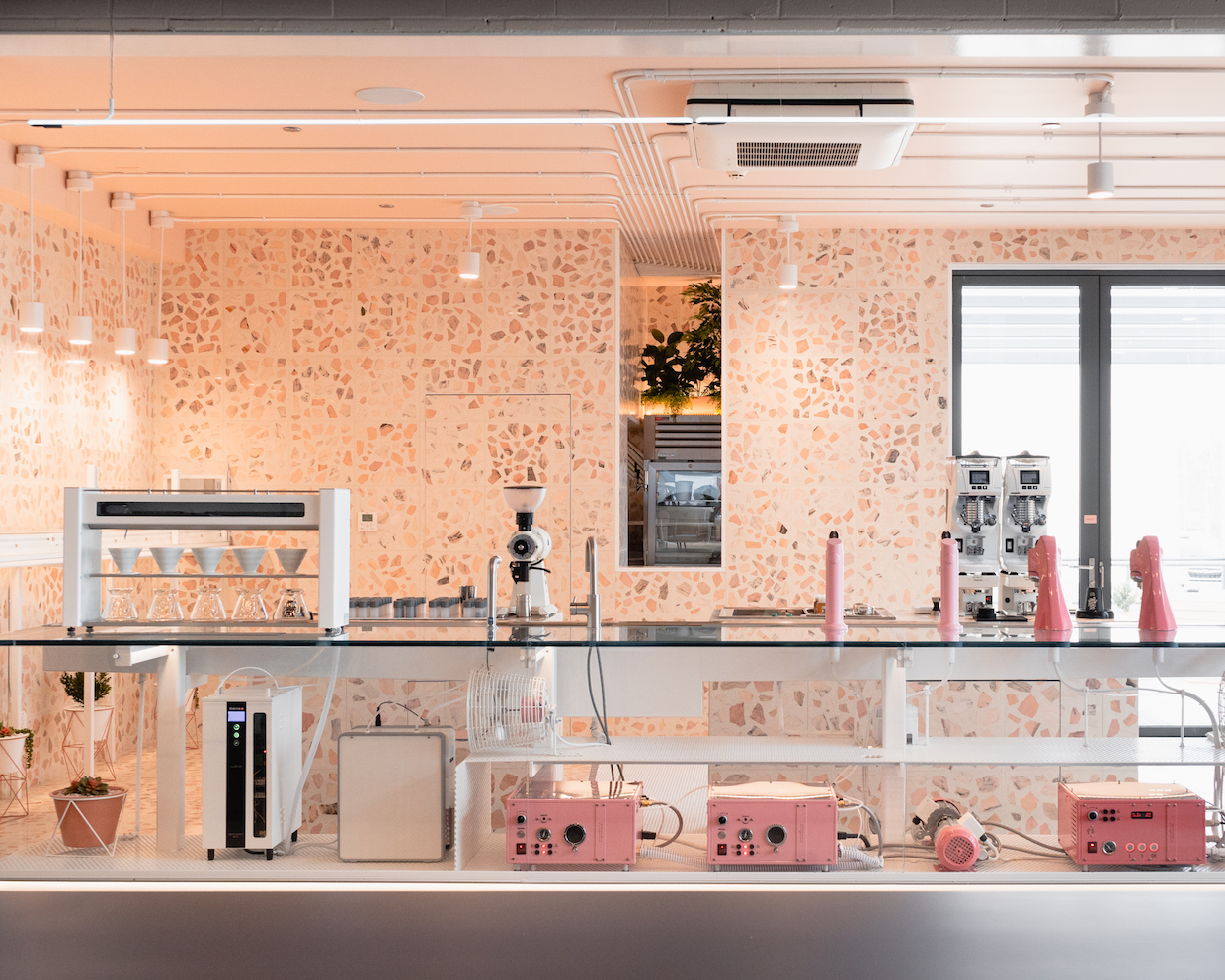 The walls and floors of the new cafe are covered corner-to-corner with pink 3/4-inch-thick Venetian tiles weighing 12 pounds each. Handmade in Italy over the course of about a year, the tiles took nine weeks just to install, Onyx Coffee Lab Co-Owner Jon Allen recently told Daily Coffee News.

All Are Welcome at Inclusion Coffee in Arlington, Texas

Guests venturing inside the shop will encounter inlaid wood designs on the mezzanine, abundant natural light from 12-foot-tall windows, comfortable seating options, lush plant life and other stylish touches feeding the industrial/mid-century modern interior aesthetic. Moore and company, including some baristas, undertook as much of the roughly year-long buildout as they could do on their own.

Beneath a “coffee bar” sign that lights up like a Broadway marquee above the service counter, Fidel’s opening months have relied upon the “pantry store” concept to bolster revenue during the COVID-19 downturn.

Homey through and through, the space is split into three rooms that share the warmth of natural wood surfaces, abundant natural light and calm shades of grey interspersed with colorful furniture and decor. 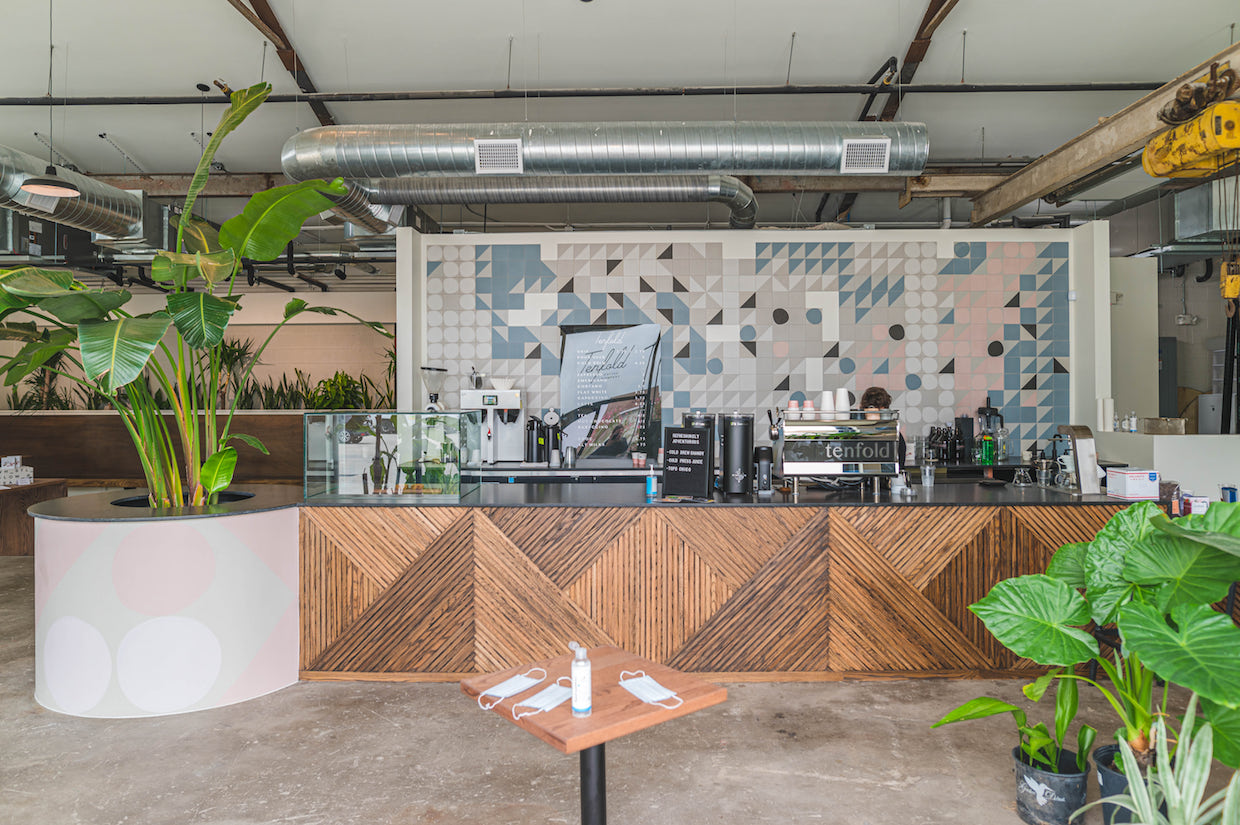 With the hope of raising the bar for coffee service many times over in Houston, Tenfold Coffee welcomed the public into its new 3,000-square-foot Greater Heights roastery and coffee shop earlier this month.

Red Dwarf Has Giant Plans For Coffee, Cocktails and Shows in Houston

A mural hand-painted by artist Farhana Rashid plays into creative lighting that was designed by local artist duo Moon Pappas. Said Pasha, “The aesthetic is interplay between cleaned-up industrial that serves as a background for our bespoke light features that travel around the room.” 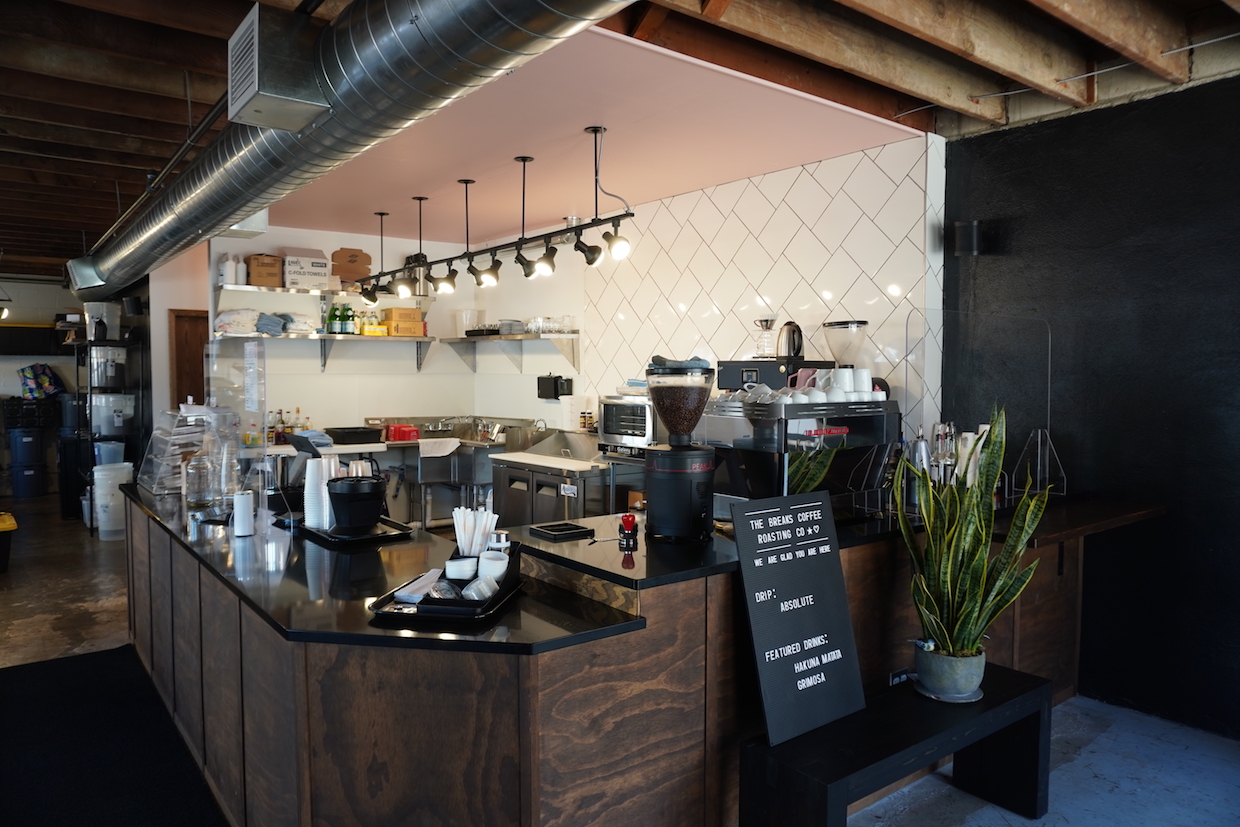 Photo courtesy of The Breaks.

Doors opened roughly two weeks ago to the approximately 1,000-square-foot downtown shop after some fairly extensive demolition and remodeling transformed a previous skateboard shop. True to those roots as well as the personal interests of owner Corey Gerlach, the refreshed interior maintains a sense of skate culture within a warehousey aesthetic that gives the space added life.

Doing its part to assist coffee-farming communities in its own supply stream that have been hit particularly hard by the pandemic, the growing Cleveland- and Oakland-based roasting and retail company 3-19 Coffee has launched The Rural Guatemala Assistance Project.

Murals and branding burst from the walls thanks to artwork by an artist known by Beard as Chalk Art Joey. A cozy booth is wrapped in a design based on Secret Stash, the independent branding Goshen gives its seasonal microlot offerings as roasted by head roaster Carl Bringenberg.

Though the concept of gathering has taken on lots of new weight in 2020, a new Detroit coffee shop by the name of Gathering Coffee Co. is nonetheless hoping to bring people closer over great coffee in responsible and socially conscious ways.

Coming at the end of August, the opening represents a remarkable feat for the KC-born roasting company, which has managed to survive a series of unfortunate events over the past five years.

Founded in 2016, the women-owned company fired up its Diedrich IR5 roaster in the new 1,700-square-foot digs inside a 150-year-old building in March, offering wholesale roasts and takeaway sales. Whole beans and a limited take-out beverage menu have been available since July in anticipation of this week’s big opening. 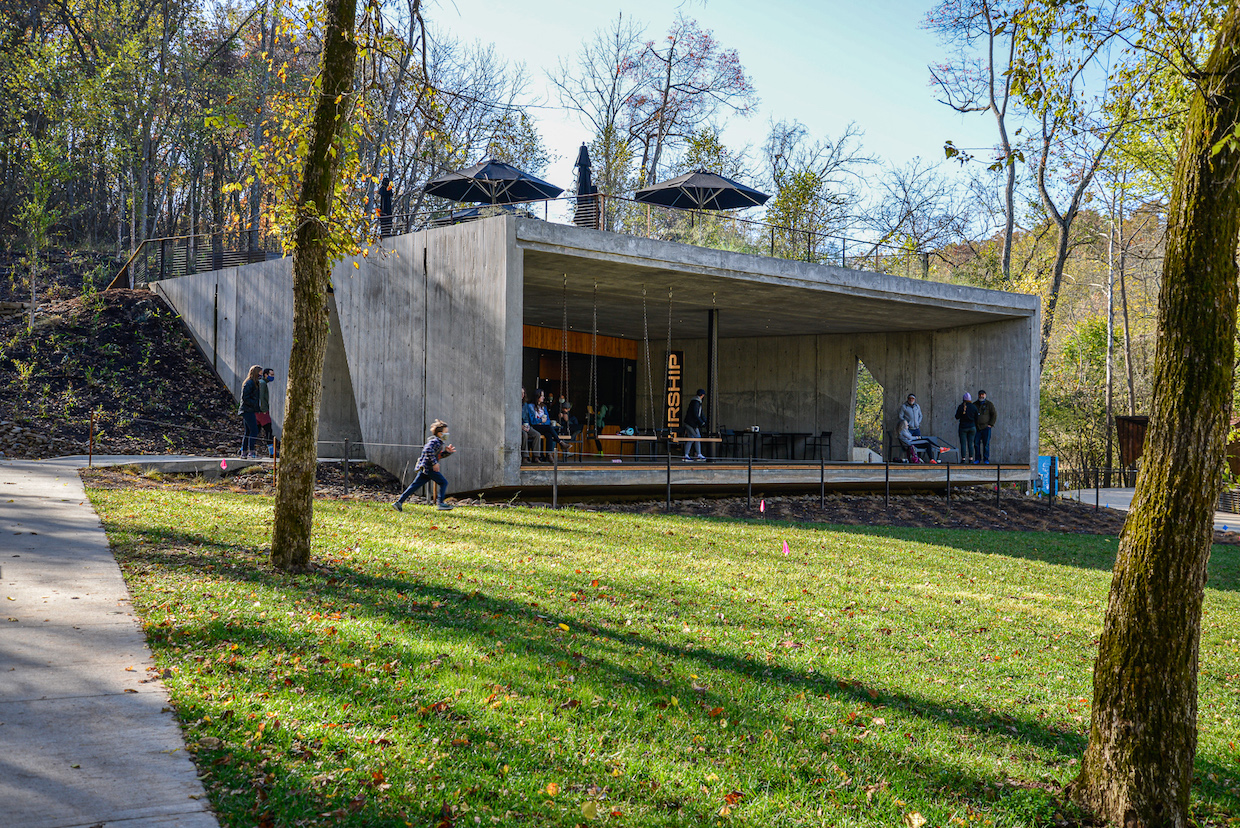 Breathe In Airship Coffee’s Cafe in an Arkansas Bike Preserve

Opened this week, the sheltered coffee bar nestled among the trees and trails of the 260-acre preserve offers abundant space for standing and seating with free-flowing air aplenty.

“My goal with the bookstore and the cafe is to be able to tell the stories, narrative[s] and lived experiences of people of color and marginalized communities,” Asamoa-Caesar recently told DCN. “Coffee is grown by people of color. I want to feature black and brown roasters and share their story.”

Beer and Coffee Curiosities Satisfied at Curio Brewing in Nashville

Said Morris, “We really want to push the boundaries of how coffee and beer can work seamlessly together.”

No Rest For The Wicked: Michigan’s Sabbath Coffee Roasters Opened on Halloween

The back wall is wrapped in wallpaper featuring a stylized coffee plant. The design adds liveliness and charm to the space illuminated by large globe pendant lights, and is a signature pattern that also carries over to the company’s whole bean retail packaging, designed by Sabbath Co-Founder Miranda Graham, who is also a professional graphic designer. 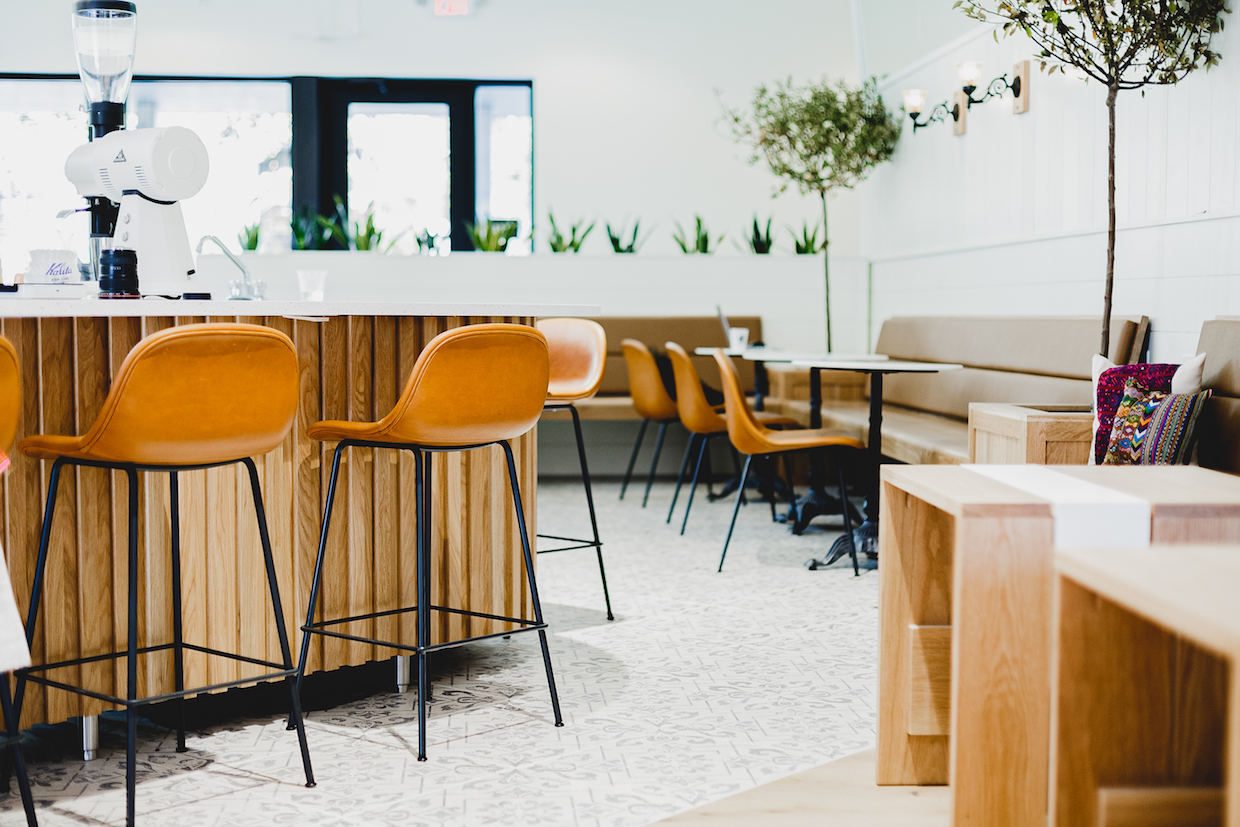 Beyond the pared down name, the shop is designed to showcase the fruits of Crimson Cup’s longstanding direct relationships with small-scale coffee farmers, while highlighting production steps that lead to the finished cup.

Since launching its coffee cart, Wildflyer has trained 15 youth, with 11 graduating from the six-month cohort program. The group connects with youths experiencing homelessness through shelters and drop-in centers, and Wildflyer now expects that the brick-and-mortar cafe will allow the organization to expand training to 20-25 young people per year.